In conjunction with the Victoria and Albert Museum in London, the Art Gallery of Ontario hosted an extraordinary exhibition in 2010-2011. The exhibition explored in depth the opulent world of the maharajas, from early 18th century until Indian independence in 1947. Maharaja: The Splendour of India’s Royal Courts allowed Canadians to see for the first time 200+ spectacular works of art created for India’s great kings — including paintings, furniture, decorative arts and jewellery. These magnificent objects chronicled the many aspects of royal life and celebrated a legacy of cultural patronage by generations of maharajas, both in India and in Europe. 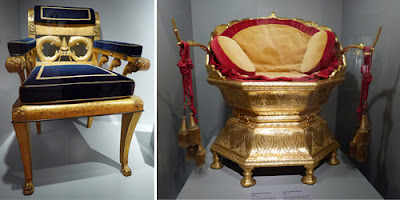 The jewellery was stunning. Just one example will do... very nicely indeed. The Maharaja of Patiala bought the most fabulous De Beers Diamond from Cartier of Paris who set it as the centre piece of a ceremonial necklace in 1928. The five rows of diamonds encrusted in a platinum chain became known as the Patiala Necklace, holding the seventh largest cut diamond in the world and the largest single commission in Cartier’s history. In recent years, Cartier re-found the necklace, bought it and spent four years restoring it. 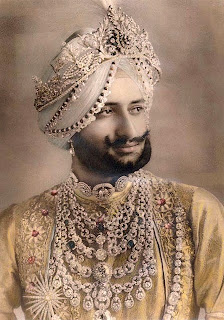 2,930 brilliant diamonds in the Patiala Necklace.

Should the viewer be proud of the maharajas’ amazing patronage of all the arts? Or cringe at the outrageous distribution of scarce resources in India back then? I personally think I would be angry.

But the Ontario museum was very clear. It was the first exhibition to celebrate the opulent world of the maharajas and their unique culture of artistic patronage. The curators and interpreters did a wonderful job of presenting the treasures in a historical context, learning how the rulers lived, what they valued, the political role they played and how, ultimately, the forces of history circumscribed their powers.  I suppose their influence partially depended on how many Princely States there were in India proper. Wiki estimates that the number ranged from 160 in 1872 to 202 in 1941.

One element of colonial history need not have worried the Canadians. When the V&A showed the same exhibition in London, they made a serious attempt to put the myth of the maharajas in its proper courtly context, to explore the visual and artistic expressions of Indian kingship before and after the maharajas' Victorian heyday. As a result, the V & A show was haunted by the sad story of the princes and the British, telling how the British first bullied the princes into submission, schooling them in western tastes, then both  mocked and envied the monsters they had created. Finally, the British quit India, leaving the maharajas to be abolished. The Ontario exhibition was presumably not haunted by colonial guilt. 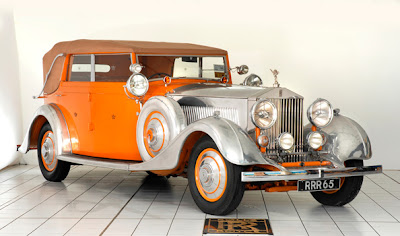 Processions in India during the 1800s were complex events that celebrated various kinds of power and prestige. They revealed tensions in political authority, social hierarchy and religious tradition. And the British representatives had to assert their colonial role without appearing to endorse or participate in the worship of Hindu deities who formed the focus of much of the event. So company-paintings were produced by Indian artists, presumably for British buyers, many of whom would have been employed by the East India Company.

Paintings of Indian architecture, occupations, castes, rituals and festivals in India were fascinating eg The Mysore Scroll with its 1,250 individuals portraits in mid-1800s dress. The British often used company-paintings as illustrations for publications, or sent them home as souvenirs. This type of painting declined in popularity around the 1840s with the introduction of photography.

A less arty but perhaps more spectacular exhibit was Star of India, an amazing 1934 Rolls Royce Phantom II custom-built for His Highness Thakore Sahib of Rajkot. Built with a polished aluminum hood and wing panels, the Star of India was expected to fetch a mind-boggling £8 million when it went on the open market in 2009! Even a German museum page that is normally blase about the top end of the Rolls Royce range became a drooling mess when examining the Star of India. It was not just a car; rather it was a symbol of a bygone era, when the maharajahs reigned in India and displayed their unfathomable wealth in the shape of fanciful and ever more lavishly designed cars. Unfathomable seems to be an appropriate word.

For those who couldn’t get to the exhibition, I have three recommendations. See the stunning images in Maharaja: The Splendour of India’s Royal Courts at The Victoria & Albert Museum, in Alain Truong's blog. 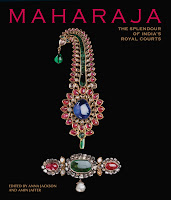 Or read Maharaja: The Splendour of India's Royal Courts (2009) by Anna Jackson and Amin Jaffer. Their goal was to examine the real and perceived worlds of the maharaja from the early 18th century to 1947, when the Indian Princes finally ceded their territories into the modern states of India and Pakistan. Or read Maharaja: The Spectacular Heritage of Princely India (1988, 2009) by Andrew Robinson and Sumio Uchiyama. Both books show that the Maharajas spent their lives in extravagant expenditure and unparalleled splendour. The authors created quite a picture, full of throne rooms, gilded ceilings, crystal fountains, gardens with strutting peacocks, treasures made of precious metals, bejewelled elephants, weddings, celebrations and festivals.

See a splendid film on the Maharaja Collection,  recorded  while the treasures were still in the Victoria and Albert Museum in London.

It was the best of times, it was the worst of times but the Raj is ever fascinating and although they were simpler times, the political mechanisations between the British and the Princes were equal to, if not above the politics of our nation today.

I know a number of Anglo Indians who's parents grew up under the Raj and they have a real chip on their shoulders that the British deserted them.

How interesting Helen. Struck as the sort of luxuries found in say Libya. Not always in the best possible taste of course!

Have you seen this book Helen?

that is so true. Although the difference between the haves and have nots in all countries was great, there was something about the difference in Indian society that was even more marked. And the Anglo-Indian community really was in a strange position!

I must add that spouse and I had a super holiday in India one year -including tours through old royal palaces.

that is a terrific blog. How did you find it?

I liked many posts, but have a look at this paragraph for setting the scene. "Maharaja Bhupinder Singh of Patiala was a larger than life personality. His appetite for everything wine, women, jewels, sports etc was gargantuan. So were his travels. He was the personal friend of the Kings of England, Spain, Sweden, Norway and many others. As an important member of the Chamber of Princes, he carried a great deal of influence in India as well."

quite like other nations, yes... only more so! And the Maharajas' wealth was not hidden in unmarked Swiss bank accounts.

The aesthetic tastes seemed to have been beautiful. The political sensibilities were somewhat lacking.

Good choice! I did mention Hal Vaughan's book about Coco Chanel in my post, without commentary:
http://melbourneblogger.blogspot.com/2011/06/coco-chanel-from-neglected-orphan-to.html

There were two reasons at the time not to go into details about the story. Firstly I wanted to focus on the early Chanel decades (1910-45). Secondly I saw a letter to the editor of History Today saying "don't you historians concentrate on any subject except the Holocaust? I am sick of it". So I am cautious about raising the Nazi spectre, unless the post is truly about WW2.

For my students, however, I will cite Hal Vaughan's findings.

David Lister in The Independent (7/9/2009) added something amazing:

Saddiq Muhammed Khan Abassi IV, Nawab of Bahawalpur, ordered a silver-encrusted bed in 1882. The design was sent to Christofle in Paris calling for a bed of "dark wood decorated with applied sterling with gilded parts, monograms and arms, ornamented with four life-size bronze figures of naked females painted in flesh colour etc". Some 290kg of silver was needed to decorate the bed. Through ingenious mechanics linked to the mattress, the Nawab was able to set the figures in motion so that they fanned him while winking at him, against a 30-minute cycle of Gounod's Faust music generated by a music box built into the bed.