"A railway station with a town attached".. in the gold fields.

The town of Maryborough’s history had emerged in the Gold Rush days of 1851-1854 when gold mining was becoming the predominant industry in the region. But it wasn’t until the railway lines were being laid down across the state of Victoria in the late 1860s that travel to rural cities became easy.

When the railway line first arrived in Maryborough, the tender specified a station building that was made from red brick with significant bluestone foundations. The building had to provide a platform for the trains, a flat for the station master, waiting rooms for travellers, offices, a dining room and verandas. So it was to be expected that one of the most significant events for Maryborough was the grand opening of the working railway station in July 1874. Everyone in central Victoria turned up.

But by the 1880s, Parliamentarians were already asking for a new station since extra trains were going to Geelong or were linked to the Ararat and Warrnambool areas. Maryborough may have been a small rural city (pop in 1854 was 25,000; now 8,000), but it was seen as a very important central junction, 165 ks from Melbourne. 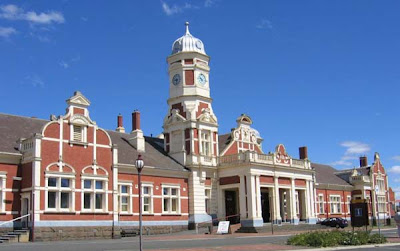 The new station was built for four times the budget of the original station. Red bricks came from a nearby kiln; roofing slates were shipped in from England; plate glass for the skylight came from Melbourne. The stucco trimming, I assume, was just for contrast. A goods shed and goods platform were built last of all. 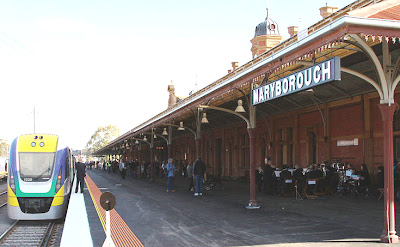 This second station was built over the top of the old station and was completed in August 1891. It was HUGE – 25 rooms and a gorgeous clock tower that was added just before WW1 started. I am not sure how to describe the architecture; the station’s own history page says the distinctive roofline and offset tower display the Anglo-Dutch style. Even now the viewer can see the different types of Dutch gables with tall faceted rendered chimneys. On the business side of the station, the very long platform covered by a veranda with a hipped roof stands out. The veranda is partly cantilevered and is supported by cast-iron ribbed columns. Locals were very proud of the fact that their platform was the longest single platform outside the capital city (1010 ms under cover).

Novelist Mark Twain visited Maryborough in the 1890s. He wrote "you can put the whole population of Maryborough into it, and give them a sofa apiece, and have room for more. You haven’t fifteen stations in America that are as big, and you probably haven’t five that are half as fine. Why, it’s perfectly elegant". He described Maryborough as 'a railway station with a town attached'. I hope he really did say that - it was very clever. And true. 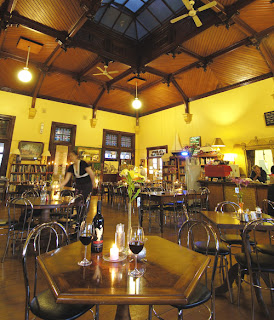 Cafe and wine centre, opened in the Maryborough Railway Station in 1993

The station is listed on the Victorian Heritage Register, but it could have sunk into quiet oblivion anyhow. Trains still operate regularly from Maryborough to Ballarat (to connect to the Ballarat-Melbourne line). But the line that was opened in 1874 from Maryborough to Castlemaine (to connect with the Bendigo- Melbourne line) is not used by regular traffic any longer. And the Mildura line, that was opened from Ballarat to Maryborough in 1874, was closed in 1993. Rural cities suffered badly as a result.

Fortunately in 1993 a local business sub-leased the southern half of the station from the town council and established an antique emporium, regional wine centre and café, open daily. A $2 million restoration of the station was carried out in 2006-7, making the visitor’s experience both historically and aesthetically pleasing. 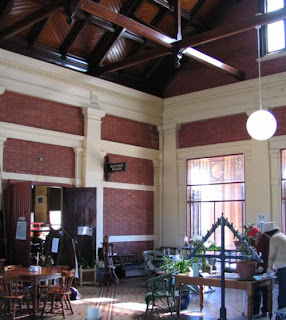 As far as I know the Twain quote is true. A couple of other great quotes from him when he was in Australia were about the change of railway gauge at Albury and his opinion of Newcastle, NSW. The Maryborough Station is just wonderful.

It is just wonderful, as we saw on a driving trip through the old gold fields recently. But what were the tax payers of the 1880s doing, paying for a bigger, better railway station with a distinctive roofline, a grand tower, Dutch gables and tall chimneys.

What a brilliant piece of architecture.
Sydney - City and Suburbs

It takes an outsider to state the bleeding obvious :)

Perhaps Maryborough thought it was a big rural city (25,000 in 1854) and would become even bigger over time. They were wrong, as it turned out, but Maryborough was clearly planning for a golden future.

The Anglo-Dutch style was striking, wasn't it? And unusual, I believe, in 19th century public buildings here.

Do you have any examples of Anglo-Dutch architecture in your Sydney blog?

Clipping Path
so glad to receive feedback. Thank you.

Such an unusual and beautiful architecture. I would catch a train from there anyday.

Hello Hels:
What an impressive building the Maryborough Railway Station is and, such good news that it has had new life breathed into it with the Antique Emporium and Cafe.

The platform with its verandah reminds us of the platforms at Great Malvern in Worcestershire. Perhaps built at around the same time, it is curious to think of these stations being built in all their glory in two separate hemispheres!! Ah, the golden age of the train!!

I actually think Victorian architects saved their biggest and best ideas for important public buildings. And what could be more public, more monumental and more impressive between 1860-90 (in Australia) than railway facilities.

I don't know Worcestershire, but I have seen other amazing Victorian railway buildings across the UK eg Waterloo, Edinburgh, Glasgow. I am just so angry than in times of budget reductions and the transfer of assets from the public sector to the private, fabulous railway facilities are lost.

Hi Helen - a fine looking station. Glad to see it's being looked after.

A lot of the old Victorian built stations outside of London have either been "modernisaed" so much they have lost all their original character or been completely demolished.

you hit the nail on the head! Facilities outside the capital city have been run down, destroyed or at the very least modernised to the point where they lost their character.

It is as if people in the main cities are worthy of good quality services and everyone else can fend for themselves.

It's certainly a beautiful railway station with an interesting history. The modern train is quite a contrast.

Kevin
good to see you in Victoria, virtually speaking :)

We don't have the colonial architecture of some of the other states, but we do have stately Victorian architecture.

Maryborough is so fortunate that its elegant old station wasn't converted into a concrete parking lot. And fortunate also that the daily Maryborough-Ballarat-Melbourne service was reinstated last year after the destruction of rural Victoria in the Kennett years.

Great thoughts you got there, believe I may possibly try just some of it throughout my daily life...!

suriya
my pleasure. It is great to get feedback from other bloggers.