Chaim Soutine was born in 1893 and spent his first 20 years in/near Minsk and Vilna, before he left for Paris in 1913. I have written about his sad life and productive times before, focusing almost entirely on his portraits. 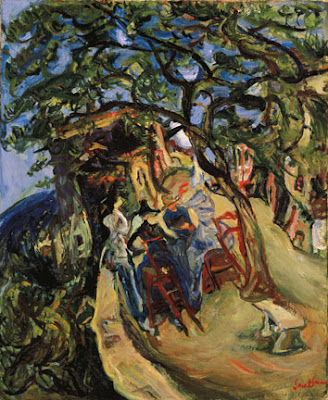 Barry Schwabsky tried to locate Soutine on an art continuum from traditional primitivism to Paris-based expressionism to the foundation for modern abstraction. What Schwabsky could say was that by the early 1920s, the more exuberantly aggressive paint-heavy manner we now associate with Soutine was in place - canvases that exhibited an extreme pleasure in their writhing, tortuous substance. What other painter, he asked, has given permission to so much adolescent wallowing in undisciplined expressiveness? Well I can think of some, but that isn’t the point. 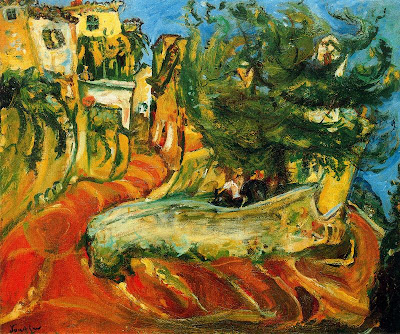 Soutine did many writhing, tortuous landscapes. Consider Landscape with Figures c1922 which came from Soutine’s visit to Ceret. This might have been the era when his work reached its most abstract and its most expressionist level. The modern viewer, thinking of Soutine's poverty, romantic failures and lack of a family support system, might be tempted to focus on the formless swirls and the strange blotches of colour. And not just that. The figures seem stretched and the furniture seems out of shape. Also consider Street of Cagnes-sur-Ner c1924 which is now in the University of Haifa and View of Cagnes 1924, now ? in the Tate.  Soutine's Cagnes scenes certainly look French. As does Chartres Cathedral c1934, now in The Museum of Modern Arts in New York.

I was looking for some trace of the first 20 years of Belarusian life in Soutine’s work. BellaBelarus recognised that there were almost no nostalgic memories of the motherland. This was totally different from, for example, Chagall’s paintings which were painted in Paris but looked as if they were firmly set in the Jewish Russian countryside.

Soutine didn’t seem eager to leave any trace of "home". Only in one of his last works, Return from School after the Storm c1939, might viewers trace those distinctive tones of simple, soft  landscape of what was Russia and is now Belarusia. This painting was previously unknown to me, a Soutine fan. So it was very interesting that it held a mysteriously quiet power, less frenetic than his usual landscapes.

It took some time before the Belarusians saluted their own son. A permanent exhibition “Spaces of Chaim Soutine” was opened in the small Belarusian town of Smilavichy near Minsk. After years of wandering, Belarusian-born painter Chaim Soutine's story came back to the place where he was born. The exhibition is divided into 2 parts of the artist’s life. The first part of the exhibition is called At home: Smilovichi-Minsk-Vilnia. His early life was shown using old furniture and displays, with information about Soutine’s family and his studies in Minsk and Vilnia. The Paris part of his life was styled on a typical Parisian coffee house with a bar counter, tables and chairs. Paintings were hung on the walls, from Soutine of course, but also his Jewish contemporaries who also left for Paris as young men: Marc Chagall, Michel Kikoine, Pinchas Kremegne.

This Jewish artist died, tragically, in 1943. He was hiding in the forests near Paris, avoiding the Gestapo. 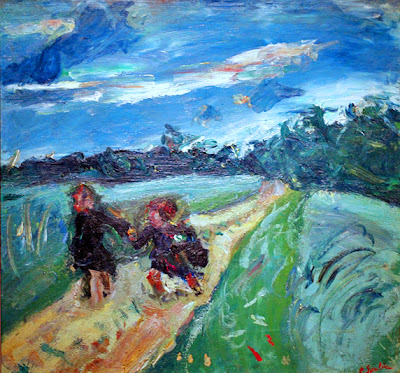 If I had assumed the Belarusians didn’t know the value of Soutine paintings these days, I was wrong. The Smilavichy gallery noted that Soutine’s paintings L'Homme au Foulard Rouge c1921 and Nature Morte à la Ray c1923 sold for huge amounts: £8,756,000 and £5,392,000 respectively at the Sotheby's auctions in 2007. I bet the Belarusians are now sorry that they disregarded their own son for so many decades. Perhaps we can ask Bella Belarus, a good online art gallery that displays 20th century Belarusian art.

He's an interesting artist. Have you read Alice Miller's essay on his early life?

I love your blog, it is wonderful!

Kim
I don't know Alice Miller's essay, no. But from what I can piece together, life in his Russian home was crowded, unhygienic, educationally stunted and socially unskilled. His only friends seemed to be Pinchus Kremegne and Michel Kikoine, all of the same age. Together the three of them made a dash to the bright lights of Paris.

I will chase up your reference. Many thanks

Previously I didn't understand Soutine's landscapes, so in lectures I always concentrated on his portraits. No problem since his portraits were memorable.

Now I have spent more time looking at his landscapes, I think you might be right. The trouble with being called a "great" artist is that he died before he had time to complete all his art goals. Like Jan Vermeer, Franz Schubert, Vincent Van Gogh etc, Soutine died way too early.

Hello Helen:
How very interesting to consider the possibility of traces back to, or influences of, Soutine's homeland. It is, after all, very difficult in life to escape totally from one's roots which, like it or not, do play a large part in formulating the kind of person one becomes. And, we would have imagined, that this would also be very much the case with artists and would expect to find evidence of this in their work.

In the case of Soutine, this is clearly not the case, or only in a very small part.

Your posts continue to delight us for the way in which you bring to the attention of us all, in the most sympathetic of ways, some aspect of the Arts which we might so easily have overlooked.

Joseph
was there a catalogue published with the Jewish Museum's Exhibition? I would love to read the essays.

Soutine's work can be such an explosion of colour and the paintings you have chosen certainly seem to show that. I remember once looking at some of Soutine's portraits with an acquaintance and she exclaimed "Did he have an eye disease? They look all mangled!"
Hmmm, well there's art and there's portrait photography, there's expression of the artist's personality and the simple capturing of a "good likeness" to please the sitter...

Nicholas, it is not surprising that your colleague responded in that way. Soutine didn't have an eye disease, but he did indeed have a difficult and quite miserable personal life.

Psychiatrists often assume the distorted colours and shapes in Expressionist paintings reflected a distorted personality in Expressionist artists. I don't think the best way to explain Expressionism is through the psychiatric ill health of a whole group of artists. Rather they all laid an emphasis on heightened emotions and the artist's inner vision.

By the way, people always assume that El Greco painted distorted, elongated figures because of an eye disease as well.

HI Helen,
I am also an aussie writing on art. I have extensive knowledge on John Constable, just finished many years writing about one of his paintings that I discovered, and now I am doing the same with Soutine, as I have a most brilliant landscape of his.

Thank you for your blog, especially helpful were the towns that Soutine travelled to other than Ceret and Cagnes. Biographers have virtually no paintings from odd places that he may have visited.

I thought I would just write to convey my thanks given that we are from the same place, and that your words of wisdom have been appreciated…
sincerely,
edward

good luck with the writing - I know how much effort it takes, in the pre-publication months (and sometimes years). I would love you to send the publication details to this post, once you have them.