When I read Edmund de Waal's book The Hare with Amber Eyes, it might have been my own family's story. After all I am an art historian, my mother’s family came from Odessa, we are Jewish and we collect the family photos and letters that survived World War Two. So in reading this book, I had to be very careful not to be sucked in at a personal level.

The Ephrussi family lived in Jewish Odessa and made their considerable money from grain exporting and later banking. Cultivated, educated people, they created lovely homes for the family in Vienna, Tokyo and Paris. The most exciting part of the family’s history was undoubtedly when one branch of the family left moved to Belle Epoque Paris. This was the time they mixed with artists, writers and cultural salons. Great great uncle of the author, Charles Ephrussi, was a particular friend of the Impressionists Renoir and Degas, and apparently was the inspiration for Marcel Proust’s Charles Swann. 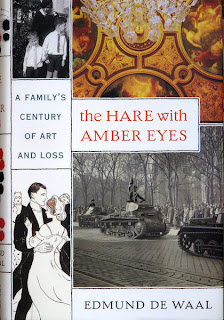 It was also the time (1870s) when the family bought hundreds of tiny Japanese netsukes; great uncle Charles Ephrussi, carried away with Paris’ passion for Japonisme, bought the objects. The tiny art treasures were kept in a black lacquer case and later posted to Vienna as a wedding present for a cousin Viktor.

The other half of the family settled in Vienna. And there was nothing too shabby about early 20th century Vienna either - this elegant, cultivated family in a totally acculturated cosmopolitan city. Life must have been lovely at chez Ephrussi on the very famous Ringstrasse. The family held large dinner parties and balls, wore fine clothes, and Viktor gained enormous pleasure gathering together impressive collections of books and art.

Only with the 1938 Anschluss in Vienna did this established Jewish family realise that their money and their education would not save their lives or their homes. I am not clear why the netsuke survived the Anschluss when every other treasure was stolen or destroyed, although answers have been offered. Still, God certainly worked in mysterious ways. 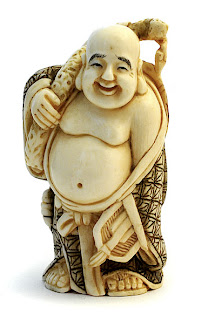 With the Anschluss in Vienna, the Ephrussi family went into exile or died. After the war Viktor’s daughter Elizabeth (de Waal's grand-mother) returned to Vienna from Britain to discover what remained of the family and their vast treasures. Only the netsuke survived.

In 1947 Elizabeth's brother Ignace visited her in Britain, before his next posting in Japan on behalf of an international grain exporter. While Viennese uncle Ignace might have been a stranger in Japan, he took the netsuke with him... and the netsuke were going "home".

It wasn't until the early 1990s that young British author Edmund de Waal inherited the very same collection of Japanese netsuke, whilst he was studying in Japan. The netsuke he inherited were tiny, detailed and carefully crafted carvings of animals and humans from his Uncle Ignace. In the book, Edmund described how he left on a journey of discovery, to investigate his family’s history and the importance or otherwise of Ignace’s netsuke. At least one carving always kept de Waal company while he was travelling: an immediate connection with his family’s past.

Personally I would not have chosen netsuke to engage the hearts and minds of readers, because few people I know love them passionately. But Edmund’s relatives didn’t collect Huguenot silver objects or Meissen porcelain – or if they did, they were destroyed during the war.

The book was a record of de Waal’s journey, both geographical and emotional. Historians always read old letters and chronicles, and visit old homes, but it must have been more difficult when the people involved were direct family. Catastrophic events overtook previous generations and although the author manages to keep it under control, I wonder if the reader does. 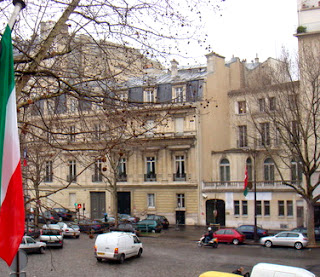 The family's homes: the very lovely Hotel Ephrussi in Paris (above)
and the even lovelier Palais Ephrussi Vienna (below) 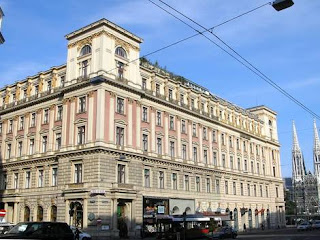 The netsuke were created in Japan, got auctioned in France, were posted to Austria, got carried to Britain, were gifted back to Japan and ended up in Britain. Thus the netsuke could be seen as a metaphor for the wandering Jewish family. de Waal appropriately stated "I want to know what the relationship has been between this wooden object that I am rolling between my fingers and where it has been." I would be more specific and ask "which other family fingers have rolled this object and what were their lives like?"

Emanata saw how the works were passed from one member of the family to the next, and how they came to mean something different to each successive owner. Thus, he asks, how did each inheritor reinvent the collection to suit his or her own interests and needs?

The Hare With Amber Eyes: A Hidden Inheritance, by Edmund de Waal, Chatto & Windus in 2010.

Thanks. I will borrow the book from my library because I love a good art treasure mystery. Better than Dan Brown.

de Waal had a fascinating background on both sides of his family. Wealthy art loving Jewish Viennese on one side; scholarly Anglican clerics on the other.

agreed 100%. Edmund de Waal took the research process very very seriously and documented the good, the bad and the ugly very carefully. Dan Brown might be an exciting novelist, but he is not even slightly distressed by historical inaccuracy.

Nonetheless The Hare with Amber Eyes is still a great story.

clergyman
spot on! de Waal is not just a practising artist in his chosen medium (ceramics), he is also an academic art historian and a curator.

That suggests he might have obtained his talent for art and connoisseurship from his mother's family. But his father, Rev Dr Victor de Waal, was the writer and scholar. Dad was a Cambridge chaplain and Dean of Canterbury Cathedral.

What a great family to be born into.

Sounds very good. I mix a lot with artists and I think all of them have a very physical link to the medium they work in.

Hermes
that is such an interesting concept.

I am an art historian and might know everything about a particular art object - its dimensions, maker's name, year of creation, style, materials, colours, iconography, even value. But I can do that from photos, old archives and modern catalogues.

An artist, on the other hand, wants to feel, touch, smell and see the object. He/she may not give a hoot about archival evidence, provenance etc.

In this book, Edmund de Waal is definitely into understanding the object through his own senses. He uses historical evidence, but only for backgrounding the objects.

I've seen it done occasionally but it would be good to get more modern artists to handle (where feasible of course) ancient art and describe what it means for them. Otherwise there meaning is lost sitting in a case as an 'object'.

I have added a link to Hannah Stoneham's Book Blog. I like what she said about the feet of history marching hard and marching fast. The netsuke were the legacy of the Ephrussi’s moment in the sun, representing loss and survival.

i learned of the Ephrussis when i purchased a set of antique dueling pistols that once belonged to Ignace, the one in Paris. i had heard of Charles possible connection to Proust and Swann's Way and i believe it likely, as they were close friends. i also heard the Ephrussis had initiated the banking threat during the Affaire Dreyfuss. although my interest was primarily finding an account of a duel instead i spent many a nights researching material that brought me to the Rothschild family to the culture of dueling in fin de siecle paris. one newspaper account had michel ephrussi "demand satisfaction" when he overheard someone on the tennis court call him a "salle jeu". precluded from fighting as a minor he waited until he turned 18 to duel he offender. both were slightly wounded but with swords not guns. and it appears michel was the militarist who probably gave ignace the pistols as a gift.

Unknown,
thank you for sharing a great story. If I were you, I would love to have the story published in a professional antiques magazine.

Just finished this book, loved it, only wish there was more of Odessa. Fascinating story and family. I passed the book on :)

agreed totally. Like you, I recommended The Hare With Amber Eyes to other people. Students, particularly those interested in turn of the century Vienna and Paris, loved the book.