Vacation and Travel Photos wrote very nicely about the tourist attractions of Restauradores Plaza in Lisbon. Now I want to look at a town not far from Lisbon, Sintra.

Since medieval times, there was smallish monastery in Sintra which was dedicated to Saint Jerome and run by his order. The Great Lisbon Earth quake of 1755 was terrible for the monastery, reducing most of it to ruins. But Saint Jerome must have been looking after the chapel because the chapel and its marble art objects escaped destruction. 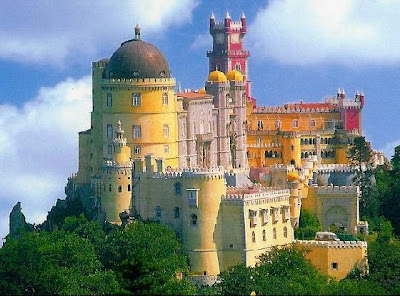 exterior of Pena palace, recently repainted. The clocktower is red.

One of King Pedro I of Brasil/Pedro IV of Portugal’s most significant acts in 1834 was to suppress all religious orders and to confiscate their property. Several years later, in 1838, King consort Ferdinand II decided to build a summer palace for the Portuguese royal family.  So it was no problem for the royals to take over the old monastery remains in Sintra, all of the surrounding lands, the nearby Castle of the Moors and a few other estates in the area. The monastery had stood on the top of a rocky hill above the town of Sintra, with 360º views of the valley and the gardens that surround the complex. And the new palace would have the same splendid views.

Pena National Palace in Sintra was built (during the years 1842-1854) by a German architect Baron Wilhelm Ludwig von Schwege in a mixture of architectural styles. Whether the mixture was the architect’s taste or not, it is interesting to me that the royal family asked for medieval elements be included. It is even more to their royal credit that elements of the old convent were preserved wherever possible eg the cloister, dining room, sacristy and chapel. Richly decorated walls are all over the interior, covered either with tiles or painted walls.

The clock tower, which looks medieval, actually wasn't built until 1843. But it was all part of the medieval, the romantic, the eccentric, the poetic and the flamboyant. So, I assume, were the turrets, towers, ramparts, secret passages and fortified gates. 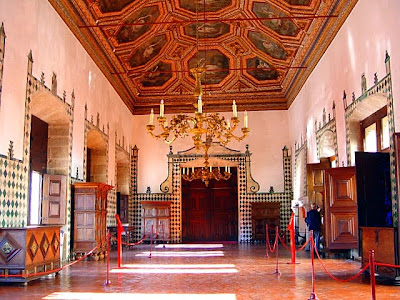 But I was more surprised that the royals would want Islamic elements in the palace’s internal architecture and decoration. Contemplating Sintra was very helpful suggesting that the formal expulsion of the Arabs from Iberia did not mean that the majority of the Islamic community fled abroad. So it is easy, as the tourist brochures say, to envisage Sintra as an over-leafy and excessively decorated fantasy from the Arabian Nights.

The palace remained one of the main royal family residencies for decades. In 1889 it was purchased by the Portuguese State, and after the Republican Revolution of 1910, the palace was classified as a national monument and transformed into a museum. The rooms were left exactly as they were when the last royal closed the front door. 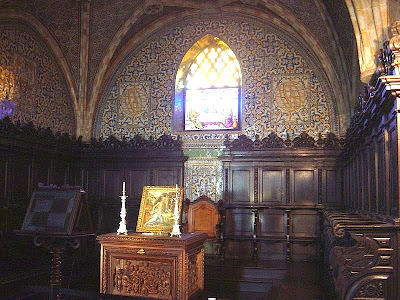 By the end of the 20th century, the palace was repainted and the original colours restored. However it must be said that many citizens didn’t like the bright colours and didn’t think they were appropriate for a royal palace. The palace has recently been declared a World Heritage Site by UNESCO and is still used for state occasions by the President of the Portuguese Republic and other government officials. At all other times, tourists can enjoy the day visit out of Lisbon, only 40 minutes away by train.

The park that completely surrounds Pena Palace was created by Ferdinand II at the same time as the palace. Of course Ferdinand was not alone in this massive task - he worked with a baron with expertise in landscaping and botany, and with German architect Baron von Schwege. Today the forest is still filled with walking paths, fantasy buildings, fountains and lakes. But the plants are a surprise. Visitors will immediately recognise Australian, Japanese, Chinese and North American trees. 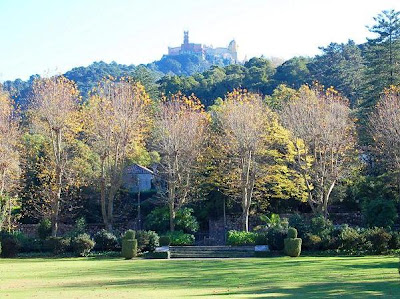 Pena Park looking up towards the palace.

Sintra (pop 33,000) has of course become a major tourist attraction because of Pena Palace. But since overseas visitors may only visit Sintra once in their lives, they will want to maximise their pleasure whilst in the town. The Castelo dos Mouros, with its great view of the Sintra-Cascais Natural Park, and the summer residence of the kings of Portugal Palácio Nacional de Sintra, are worth visiting as you can see from the photos above

And for art-oriented visitors, The Sintra Museum of Modern Art is special. The Berardo Collection of Modern and Contemporary Art, an important international collection of 20th century European and American art, has been open since 1987. José Manuel Rodrigues Berardo is a wealthy Portuguese financier with mining interests in South Africa, Canada, Portugal and Australia. But his passion is modern art. Launching the collection was one of Berardo's priorities in life and it was with great satisfaction that he saw it classified as one of the best private collections in Europe by the Independent (11th Aug 1998). The article was called ”Beyond the Guggenheim”.
Posted by Hels at 5.1.11

Awesome. It really is a fantasy place.

Jim
I don't like the idea of inherited royalty... it smacks of elitist power being held in the hands of the unelected few. But walking inside the palace and outside in the park might change your mind. Royals must have lived very very nicely *sigh*

Nor me, unfortunately they had the money and power to realise their fantasies, some of which are undeniably beautiful. A conundrum.

Hermes
Another thing I didn't know about was Portuguese art and architecture, even though Portugal was arguably one of the four most powerful nations on earth. Art history at uni consisted of
1. Italy
2. France
3. Britain, Germany, Spain
4. Australia
5. the rest.

mo,
the palace really was a confection of any architectural or decorative fantasy that popped into their royal heads. Even the original colours were a confection.

Hi! If you can do visit Sintra. The Pena Castle is absolutely marvelous. You'll love it I'm sure!

P.S. If you can do visit my new project: Open Galleries - a photo sharing site - and give me some feedback on it. Hope you like it! :)

Joao
thanks for the inspiration :)

Now I would like to analyse one or two of King Ludwig II's castles in Southern Germany. It might be very interesting to draw some comparisons with Sintra.

I must admit that this is all new to me. It is all fascinating. Portugal obviously needs much closer attention regarding the history of art and decoration. Thanks so much.

Isn't that the truth! The disadvantage of blogging is that it floods us with new material to read and new historical concepts to assimilate. But that is also blogging's great joy.

This place is really amazing. Both the exterior and interior are decorated beautifully. I would love to visit that place. In our site we also published some the most amazing architecture around the world. You can visit it here simpletutors.com

Wonderful place like dream. Love to visit these place which inspire for art, culture and fun.
Clipping Path

thanks for popping in.

Sometimes an architect can create interiors and exteriors that are both Christian and Islamic in influence. As you noted, the results can be extraordinary.

I didn't have time to see Sintra when I was in Lisbon for just a weekend but it'll be on my list to visit next if I go back.brals

Heather,
one of the terrible things about travelling, if you only have a limited time to be away each year, it that tough choices have to be made. If you visit places A, B and F, that means you won't have enough time to visit places C, D and L.

One of the great things about travelling is that there is always next year. Or the year after. In the meantime, I use super blogs like yours to list and examine places that I need to visit in the near future. Thank you!

Sintra is also, I believe, the centre of one particular form of Fado music. The examples I have seem to accentuate guitar work over voice, unlike the Lisbon varieties.

marc,
thanks for that - fado is to Portugal what flamenco is to Spain! My next trip to Lisbon and surrounds is looking more and more interesting all the time.

You've got your pictures a bit mixed up. The interior here is actually of the Palaçio Nacional in the town, a building far superior and more beautiful than Pena

That happens very easily when one's in a strange place. Actually there's not a lot worth photographing inside Pena (though outside here http://www.pbase.com/diasdosreis/sintra_pena
for example), and strictly speaking cameras aren't allowed inside the town palace