The Cairns-Kuranda Railway in tropical Queensland

In the late 1870s, Kuranda was the middle crossing on the Barron River for prospectors and labourers on the Cairns track. In the prolonged North Queensland wet seasons of the 1880s, desperate tin miners on the Wild River were unable to obtain supplies and were starving. The boggy road leading inland from Port Douglas was proving impossible, and a railway to the coast was urgently needed. 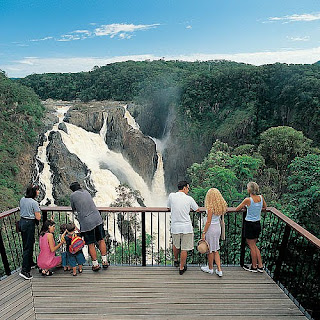 The Kuranda Scenic Railway history tells that in March 1882, the Minister for Works and Mines announced the search for a route from the Atherton Tablelands to the coast. Port Douglas, Innisfail and Cairns all formed Railway Leagues, getting involved in a long and bitter fight for the right to the railway.

There were several possible routes from the coast up to the Tablelands. In March 1884, a surveyor submitted reports from investigations carried out on all the routes marked by the explorer Christie Palmerston. And a decision was made: the Barron Valley gorge route was chosen. Port Douglas and Innisfail citizens were devastated; Cairns citizens (see map) were thrilled.

In May 1886, the Premier of Queensland used a silver spade to turn launch the project which was always going to be a truly major engineering feat. Construction of the Cairns-Kuranda Railway was by three separate contracts for lengths of 13km, 25 km, 37km. The line was to total 75km across the vast Atherton Tablelands leading to Mareeba. 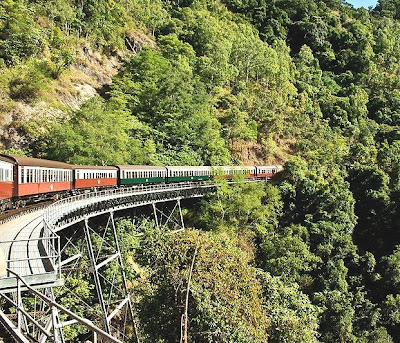 
Section One of the line ran from Cairns to just beyond Redlynch. The contract was won and work started, but progress was dogged by bad luck and a possible lack of supervision. Sickness was prevalent amongst the navvies; working conditions in the swamps and jungles were almost unbearable. In Nov 1886 the contract for Section One was taken over by another crowd, but they too had given up by Jan 1887. Section One was finally completed by the Queensland Government.

In Jan 1887, a tender was accepted for Section Two. This ascent was very dangerous due to steep grades, dense jungle and aboriginals defending their territory. In all, this section included 15 tunnels, 93 curves and dozens of difficult bridges mounted many meters above ravines and waterfalls. They tackled the jungle and mountains not with modern equipment, but with dynamite, buckets and simple tools. Great escarpments were removed from the mountains above the line and every loose rock and overhanging tree had to be removed by hand. 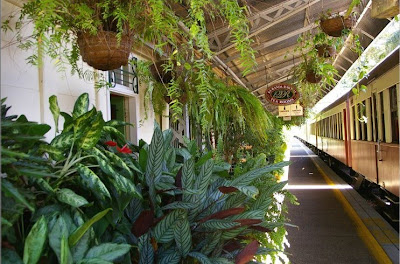 Earthworks proved particularly difficult. The deep cuttings and extensive embankments that were removed totalled millions of cubic metres of earthworks. The Barron Valley earth was especially treacherous. Slopes averaged 45 degrees and the entire surface was covered with a layer of disjointed rock, rotting vegetation and soil. Possibly hundreds of men died as they lay down the sleepers of the Kuranda Rail: 23 were confirmed dead through disease or accident. Others remain unaccounted for, perhaps buried under the sleepers.

During construction, navvies’ camps popped up everywhere. Small townships, complete with hotels, were thriving at #3 Tunnel, Stoney Creek, Glacier Rock, Camp Oven Creek and Rainbow Creek. At one stage, 1500 men, mainly Irish and Italian, were involved in the project.

Faced with poor working conditions in April 1888, a meeting of predominantly Irish workers at Kamerunga resulted in the formation of the Victorian Labour League. In August 1890, the great maritime strike spread to the railway workers and they formed The United Sons of Toil. They made a demand for 90 cents per day (or its imperial equivalent). By September differences had been resolved and the navvies’ wages were marginally increased.

In April 1890, Stoney Creek bridge was almost complete and the project was paid a vice-regal visit by the Governor of Queensland.

By May 1891, rail was laid to the end of the second section at Myola. In June 1891, one of three Railway Commissioners at that time opened the line for goods traffic only. Just a week later, the Cairns- Kuranda Railway line was opened to passenger travel. The Kuranda Scenic Railway was/is a spectacular journey comprising unsurpassed views of dense rainforest, steep ravines and picturesque waterfalls within the World Heritage-listed Barron Gorge National Park.

Close to the Barron Falls and a haven from the humidity of the coast, Kuranda was now open.

With the railway being the only means of access, Kuranda remained a sleepy village throughout the 1920s and 1930s, visited mainly by timber and railway workers and a growing number of local tourists. Trade at Port Douglas died off rapidly and the town became a quiet little retreat. Innisfail prospered in its own right because of the growing sugar industry. With a reliable supply of goods and freight, the Tablelands bloomed with its rich grazing land. And Cairns boomed. 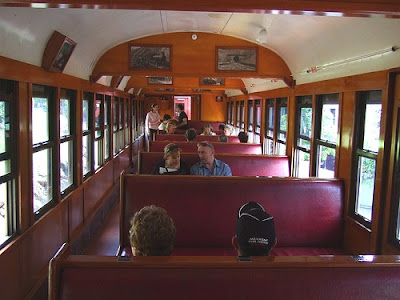 Visitors who travel to Kuranda by train will enjoy the distinctive heritage carriages adorned with brass insignias - the most exciting part of spouse's and my trip. The Victorian-inspired interiors will remind modern tourists of their grandparents’ trips. So will the Kuranda Railway Tea Rooms at the station.

Today tourists can return from Kuranda by skyrail, the longest cable car in the world at 7.5km. The cable car drops visitors off at two stations within the forest. From the first there is a very short walking loop through the forest, with guides departing every 20-30mins. The second station has a slightly longer walk and viewing platforms over the Barron Falls. The torrents of water gushing over the falls in the wet season are an impressive sight. 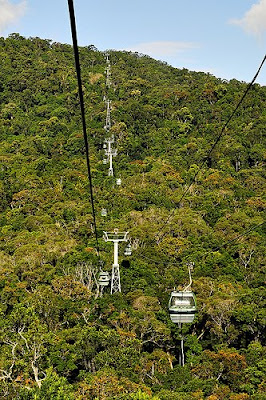 Some trip, but thanks for reminding us at the cost such projects involved.

Interesting to see that Irish navvies were employed during construction. They built most of the railways here in the UK too.

Do they still use steam locos on this service?

Glen,
Good to see you... it IS spectacular!

The Cairns Kuranda Steam page says "The Steam service between Cairns and Kuranda is no longer running. Watch this space for future developments. If you are in the Cairns area and want a steam train ride, we recommend the Ballyhooley steam railway in Port Douglas. Trains operate there every Sunday, and Sunpalm Transport can transfer you from Cairns to Port Douglas."

Hermes
The tropical landscapes are truly sensational, and even the railway station is lush.

But I don't think the project was worth the loss of life and limb. Boiling hot, 100% humidity all day and night, impenetrable forest, steep mountain face and summer flooding.

I haven't been on the Kuranda train because I concentrate on long distance trips with bedrooms and dining rooms on board. But the Victorian interiors look like fun.

No bedrooms and dining rooms *nod*.
In fact the train takes just under 2 hours after leaving Cairns, so you would only do the trip for a] the fabulous scenery and b] the lovely village of Kuranda.

Oh yes..for railway fanatics, there are the 40 bridges, 15 tunnels, the steep winding curves, the Barron Gorge falls and the dense rainforests.

Pup,
I hope 2011 is a wonderful year, full of creative blogging.

Canada is so far away from Australia. Yet it always strikes me that the world of history, arts and literature are brought closer and closer by good blogging.

What an accomplishment! What a story!

Dina
Australia's tropical climate and geography are both pretty rugged, as you remember. It was indeed an engineering feat of epic proportions.