During the Long Depression of 1873, a number of American railroads went bankrupt. The St Paul and Pacific Railroad was in a terrible financial and legal mess. But some industrialists suffered less than other Americans. Canadian James J Hill (1838–1916) believed the St Paul and Pacific Railroad could be turned around financially, provided that the initial capital could be found. Hill developed a team with four other successful business men who, together, bought the St Paul railroad and expanded into the area formerly run by the Northern Pacific Railway. James J Hill became the proud general manager of the brand new St Paul Minneapolis and Manitoba Railway Co in 1879.

Just one decade later (in 1889), James Hill merged the St Paul, Minneapolis and Manitoba Railway with the Montana Central Railroad to form the Great Northern Railway. Hill became known, rather grandiosely, as the Empire Builder. 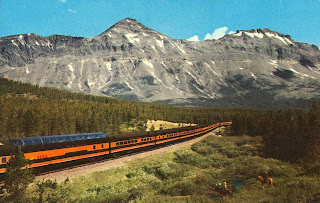 Great Northern's Empire Builder nearing the summit of the Continental Divide at Marias Pass. This is on the southern boundary of Glacier National Park in the Montana Rockies (Company postcard).
But Darren Sainsbury noted that much of the Great Northern Railroad was not laid down until the early 1890s, AFTER the merger. Breaching the Rockies must have been the most difficult engineering task for them to deal with, so they had to locate the lowest pass across the Rockies in all of the USA. Despite another terrible depression in the 1890s, Hill’s new service quickly became the most enduring Gilded Age railway in North America.
Today the 2-day trip is definitely no longer gilded. In order to keep the trip affordable, passengers can choose between very cheap coach seats (USA$150), roomettes with no private toilet and shower, and bedrooms with private toilet and shower (still quite cheap at USA$ 420+). All sleeping car passenger receive complete meal service in the dining car as part of their ticket price. Coach class passenger have three choices: a] they may use the dining car, as long as they pay for any meal they purchase, B] they can order from the at-seat meal service or C] they can buy sandwiches at the railway stations en route and bring them aboard.
The plan must be working well because, since 2007, the Great Northern Railroad has been Amtrak's busiest long-distance route, carrying 500,000+ travellers annually. But this train is definitely not the Orient Express where people dressed up in cocktail gear en route to Istanbul. It isn't even as elegant as the Rocky Mountaineer trip that spouse and I loved so much in Canada. Yes Virginia, there is Life after Retirement called it 'camping on wheels'.

Observation car
There are 40 stops in all, starting from Seattle (or Portland), continuing via Cascade Mountains, Columbia River Gorge, Spokane, Whitefish, Glacier National Park, Minot, St Paul, Minneapolis and ending in Chicago. For a foreigner like myself, the best part of the trip is The Trails and Rails Programme. Presented during each day in summer in cooperation with the National Park Service, volunteer rangers offer en-route lectures in the observation car. They discussed everything I wanted to know about the history, culture and geography of the Great Plains.

Everyone’s travel highlight is different. The company realises that passengers will spend much of the time looking at (rather boring?) plains in North Dakota and Eastern Montana, so they emphasise the varied landscapes, crops, small towns and three Indian reservations. 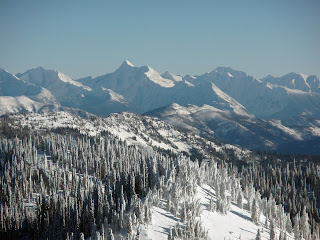 Passengers can see where the Snake and Yakima Rivers join, creating the mighty Columbia River. In the Columbia River gorge, along the Amtrak route, it is easy to take in the stunning beauty of its black basalt cliffs, ribbon-like waterfalls, and lush fir forests. And for those going to/from Portland, the train follows the Columbia on its Washington state side. Mt St Helens can be seen on one side of the train and Mount Hood ranges over the river on the other. The observation car is like a giant picture theatre. Spectacular!

Monkeegrrl’s Blog loved the experience. She described going through some of the most beautiful country the US has to offer. “From Chicago to the Wisconsin Dells, the Minnesota prairie, stunning fields of sunflowers in North Dakota, mountains and rivers in Montana and Idaho and on into Oregon. The train travelled into Glacier National Park and stopped at the lodge, which was originally designed as a rail stop. Porters came up from the hotel to take luggage from visiting passengers”. 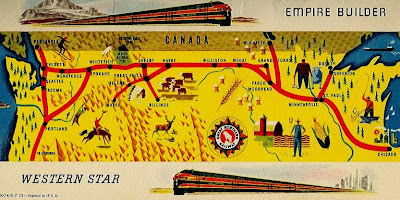 Great Northern's map, in The Empire Builder brochure, 1951
For people going in the other direction, The Empire Builder leaves from Chicago’s Union Station, Amtrak’s midwest hub at 2:15 pm daily. The train stops to receive passengers in north suburban Chicago IL and Milwaukee WI before continuing across Central Wisconsin. At La Crosse WI, the train crosses the Mississippi River to Minnesota and winds along the river to St Paul.
Posted by Hels at 24.11.10

I would agree with the longer the better, Jack, as long as there are plenty of stops to get off the train and look around. Watching the magnificent countryside rush by is ok all evening and night, but during the day I want to really get to know the places I am visiting.

What a grand trip. There is nothing to compare to a long and comfortable train trip.

Andrew, good to hear from you.

On some of the trips I have been on, there have been wonderful stops with side trips as part of the tour eg the Ghan stopped in Alice Springs; the Eastern & Oriental Express stopped for a good look at Penang.

I wish the Empire Builder did that. But I think the company faces a difference in the priorities of long distance tourists Vs those of short distance commuters.

Thanks for the comment. As I said in my blog, the views going out west were fantastic. And I would love to travel across Canada on a train.

I have had the pleasure of visiting your lovely city of Melbourne. One of my sons will spend the Christmas and New Year's holidays visiting Melbourne and New Zealand as he makes his way home from Malaysia.
Denise

Denise agreed. Most people love their own country, but it is travel around other peoples' countries that makes us grow. Thankfully I think I will never tire of the travel experience :)

Thank you for this clever and useful architecture idea.

I am going to be travelling this southern winter/northern summer. It absolutely has to be a luxury train trip, doesn't it? :)