Eggington House near Leighton Buzzard in Bedfordshire has been for sale. I am interested in the home for two important reasons. Firstly it was built in 1696, soon after the Revocation of the Edict of Nantes (1685). The Edict forced Protestant Frenchmen to flee France or face forced conversion to Catholicism, galley slavery or even execution. Secondly not many William and Mary era homes survive for us to examine, splendid or otherwise.

Nikolaus Pevsner, my hero amongst architectural historians, carefully differentiated between this William III style and the later Queen Anne style of William’s sister in law. The houses and gardens of the William III era (1650–1702) were graceful but rather heavy, coming mid-way between the French-inspired Baroque of the Restoration and the rather austere Queen Anne period that might have better reflected Protestant Huguenot taste. For example, the use of brick became popular in Britain as an element of William’s international influence. He was, after all, born and raised in the Netherlands.

To restate the importance of the Huguenots on William III taste, note that among the Huguenots seeking refuge in Calvinist Holland was interior designer Daniel Marot, himself the son of an architect. The stadtholder soon  commissioned Marot to work on his palace at Het Loo in the Netherlands and other buildings. William also took a keen interest in the gardens that Marot designed, so it was not a surprise when Marot followed William and Mary to England.

Treasure Hunt made a similar point. Dyrham Park in Gloucestershire has a variety of Dutch art objects, collected by Secretary of War William Blathwayt during his travels with King William III to the Continent. Blathwayt adored Dutch paintings, seventeenth-century Delft glazed earthenware, cut flowers, Dutch stamped leather wallhangings and a state bed in the style of Daniel Marot.

South Bedfordshire in particular discovered late-Renaissance mansion architecture from France and the Netherlands. It foreshadowed the distinctive brick houses of the 18th century which were introduced through the royal patronage of King William. 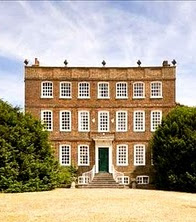 Eggington House was built in 1696 for Jean Renouille, a Huguenot described as a merchant tailor who fled from Montauban in Languedoc in SW France. Bedfordshire encouraged newly arriving Huguenots to settle in the towns and surrounding county, thus becoming an important centre for the Huguenot lace-making industry in Britain.

I’d love to know how Jean Renouille made his livelihood in Bedfordshire - we know for a fact that he eventually became Sheriff of Bedfordshire, an establishment position if ever I heard of one. And within a generation, we know the Renouille family must have integrated rather nicely, because they Anglicised the family name to Reynal, moved to the very smart Hockliffe Grange and let out Eggington to other well-to-do families.

Pevsner described Eggington House as an uncommonly fine example of C17th domestic architecture, completely up to the moment in features. It was built of red brick under a tiled roof with a panelled parapet. The main façade had 7 bays of classical segment-headed sash windows and was three storeys high. The roof line was concealed by a panelled parapet decorated with urns. Surrounded on three sides by its own land and woodland, the house was approached down its own gravelled drive through a set of gates. Pevsner didn’t call it smallish, but I will.

Descriptions in CountryLife .co.uk are very useful. The house has magnificent reception rooms, all with high ceilings and full length sash windows allowing light to flood into every room. The interior contains a staircase with twisted balusters. The drawing room is peaceful with light, soft-oak panelling on all walls with attractive carved wooden alcoves either side of a carved wooden fire-place with a French door leading out onto the terrace and garden. The sash windows have their own light oak shutters and with wooden floor boards and wooden cornicing. The study has walls of decorative painted panels, a unique painted alcove which is thought to be of the original William III style and an impressive marble fire-place. The dining room leads off from the reception hall with walls of painted wooden panelling, wooden floor boards and an open fireplace. 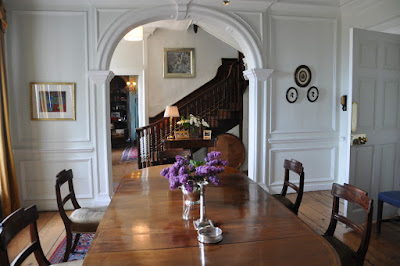 I have seen some modern photos of Eggington House’s interior, but I wish I could find drawings or photos from previous centuries. [Since the house was requisitioned by the Army during WW1, it is possible that substantial internal renovations were required, post-war]. In general, we can say that William and Mary design styles included French, Dutch and eastern influences. In wealthy homes, these influences could be found in furnishings carved in walnut, fruitwood and ebony, along side marquetry. But perhaps Huguenots, in that first difficult generation of exile and adaptation, had simpler tastes. If the house sells, will the new owners know about the Revocation of the Edict of Nantes, the Dutch stadtholder, Daniel Marot, Bedfordshire's Huguenot community and Jean Renouille.

Not many bloggers discussed Huguenot architecture after the expulsion (1685). katy elliot blog has wonderful images from Huguenot Street: New Paltz, NY but the slightly later date (early 1700s) suggests that the New York Huguenots had been living for a generation in The Netherlands. She suggested that the windows and shutters felt Dutch and different from anything she had ever seen in New England. Sam Gruber’s Jewish Art and Monuments also has an image of Huguenot architecture, but again it is early C18th. In 1742 a Huguenot chapel was built on the corner of Brick Lane and Fournier Street in Tower Hamlets in London’s East End. Called La Neuve Eglise, this dark brick and rather austere building later became Spitalfields Great Synagogue.

I would like to write a post on The French Protestant Hospital, La Providence, of the same era. But sofar I cannot find any photos of its original 1718 architecture.

I received a letter from Terri, two days before this post on Huguenot architecture was scheduled to appear:

"I'm an American with Huguenot ancestry. I am interested in reading more history and also even more interested in Huguenot symbols/jewelry/knotwork, and art. Can you direct me?"


Terri, timing is everything :) I hope you find the reading list very useful.

Only two issues: there are no architects' names and the building dates were often 75+ years after the expulsion. See http://exploringeastlondon.co.uk/eel/Spitalfields/Spitalfields.htm

You may be interested that refugee Huguenots in England experienced a millenarian religious movement in the first years of the 18th century, which I have blogged about here:

This movement had some secret sympathizers in the highest circles of English society, for example, Sir Isaac Newton, then Master of the Mint.

Thank you! 20 years ago I read heaps of books and journal articles published in English about the Huguenots in Britain. But only from the perspective of silver art, silk weaving, church building and other methods of settling themselves into their new homeland.

I read your reference and will certainly follow up on the millenarian religious movement. What a difficult time it must have been for those poor Frenchmen, expelled from their own beloved homeland.