While away on holidays last summer, I accidentally found myself in a fabulous country bookshop, filled with old books, old prints, timber floors and great coffee. I accidentally bought a brilliant book called The Fast Set: the World of Edwardian Racing by George Plumptre, 1985. I will refer to this book again and again, I imagine.

George Plumptre stressed that in marked contrast to his rather prim parents Victoria and Albert, who considered horse racing and house parties disreputable and decadent, the Prince of Wales was in his element. With plenty of money and endless leisure time at his disposal, Bertie loved nothing more than lavish house parties for race meetings. High Society of course followed him. The great aristocratic owners such as the Dukes of Westminster and Portland were primarily interested in breeding and owning the best horses of the day. Alfred de Rothschild, for his part, used the racing world as his entrance into respectable Christian society. Well-heeled families looked forward to The Season each year, to put on country house parties themselves or to attend other families’ extravaganzas. 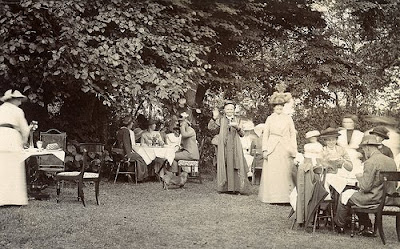 Even architects and garden designers strove to achieve the perfect space for country house properties and their Edwardian social life. As boblatham blog showed, Sir Edwin Lutyens designed a truly exquisite formal garden for the Hon Mr Portman of Hestercombe in Somerset, which he and Gertrude Jekyll completed in 1906. Hertercombe became a stately home much loved for its summer house parties, right in the middle of the Edwardian golden age.

The Prince’s patronage gave racing and country house parties the ultimate imprimatur. Select race meetings - the Derby and Oaks at Epsom (south of London), Royal Ascot (next to Windsor), the Newmarket (near Cambridge) and Goodwood (near Bognor Regis) summer meetings and the St Leger at Doncaster (South Yorkshire) - became major events in the social calendar. In fact the royal nod made racing socially de rigeur. A friendship with the Prince of Wales was the best guarantee of social success. 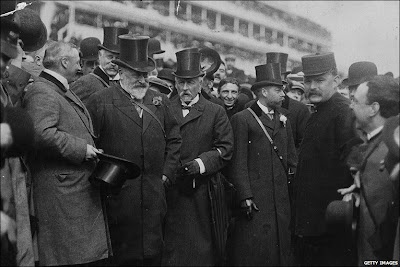 Women started to be included in the horsy set. Women were expected to be able to talk about racing, to look well dressed at race meetings and to have a good horse seat themselves. But mostly women were to play leading roles in the house parties that became in integral part of life off-course. Competition among hostesses to give the largest and smartest parties and to entertain the most important people was intense. Racing as developed and enjoyed by the Edwardians, on and off the course, achieved its peak patronage by the rich and the aristocratic. It was both a major sporting and a core social event on the Edwardian calendar.

Edwardian Promenade said that the 1860s-1914 era was thought of as the Golden Age of country house entertaining. I agree with her. Popular, but the expense must have been staggering. Parties were usually held from Saturday to Monday; the host and hostess had to supply rooms in their homes for all the guests and the guests’ maids and footmen, three meals a day, all picnic meals at the race track, and their own servants to run this entire enterprise smoothly. In addition, the guests would expect to be offered tennis, croquet, golf, cricket, an outdoor band and an indoor dance. 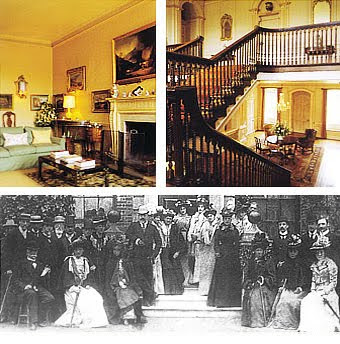 House party at Ardington House, Oxfordshire with the Prince of Wales.

If the stately home was close enough, guests could arrive by a fleet of carriages. Otherwise it was necessary to go by train. Once guests arrived at the closest railway station, the host family would send servants to meet them and to drive them to the home via horses and carriages. I have no doubt that without the superb network of fast and efficient railways across Britain, country house parties would have been smaller, less extravagant and shorter. In time, the motorcar made it easier to get to country house parties, and then The Fast Set travelled to country homes very easily.

Though racing parties were held during The Season when Parliament was in recess, August and September were the months for country house parties that specialised in shooting. The success of the house party mainly depended upon people knowing one another. This was important for the men out in the field with the guns, and was important to the wives who had to amuse themselves while the men went out shooting. But it might have been tricky, if the host and hostess were not certain who of their guests were sleeping with whom, that year.

Plumptre noted that although shooting was a compulsive hobby for most Edwardian men of this social standing, the women were confined to the house until lunch. Then they were expected to tramp outside and eat either in a draughty tent or, worse still, in the open. After lunch the women were expected to stand silently by their husbands, barracking quietly that their man would bag the most birds. I don’t know what would be worst: the freezing cold feet, the intense boredom or the relentless noise of guns banging. 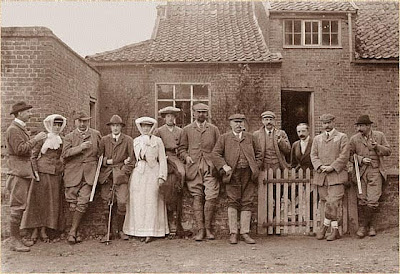 But even the best of times come to an end; when upper class men became the officers in the trenches of Flanders Field and died by their thousands, The Good Edwardian Life had come to an abrupt end.

What a fascinating book... I am really interested in the way people lived at different times in history and would love to find a copy... thanks for the great post!

I totally agree. Military and imperial history may be easier to locate, because decisions were so well documented. But social history is what made peoples' lives what they really were.

"But it might have been tricky, if the host and hostess were not certain who of their guests were sleeping with whom, that year". I am shocked. SHOCKED! Those fun loving royals and their nobe friends must have behaved very badly.

Queen Victoria had been shocked by her son's outrageous behaviour (and his friends') as well, and had written him letter after letter, begging him to improve.

I think Edwardian country house parties WERE about shooting, horse racing and great food/wine, but sexual assignations seemed just as important. Out of the city... out of sight.

You touch upon it, but I think in a number of cases, (and I certainly know of one family in Scotland), the cost of this royal entertainment was staggering beyond belief, and the family to which I refer never recovered. Of course you could not refuse a royal visit, but when the habit became a regular fixture, the costs mounted, because you can be sure the Prince of Wales, and later King never offered to assist financially. All rather sad and pathetic in the end.

Dear Helen, What fun this book sounds to be. Although I have read several gardening books by GP, this book has somehow escaped me. I am inspired now to track it down.

Hestercombe is now in the ownership of the Somerset Fire Brigade but the 'Plat' as designed by Lutyens and planted by Jekyll has been restored and is open to the public during the summer months. It is a splendid garden.

Although George Plumptre's book is not about gardens, I used Hestercombe as a wonderful example of a garden designed to accommodate gorgeous Edwardian country weekends. Imagine.. a summer day, beautiful flowers trees and lawns, gorgeous dresses, staff to bring the food and drink outside.. perfect.

columnist,
Quite right. I think the problem with Royal Progresses was always thus: for the entire summer, the Royal Personage lived off the generous hospitality of selected families around the countryside.

It was most true of Queen Elizabeth I because her "team" was so huge. Just the thought of 10 courses for ever meal, for (eg) 200 guests. And each guest had 3-5 of his/her own staff to be fed and housed. What a financial nightmare :(

Wow I have read your article and by the way I found you website
on Google and I think after I read several post on you
website especially this one I have my own opinion about
what should I comment on the next hang out with my boy
friend, maybe today I will tell my friendsabout this one and
get debate.

This was important for the men out in the field with the guns, and was important to the wives who had to amuse themselves while the men went out shooting.

I dislike guns and find the idea of killing animals for sport (but not food) unappealing. However Edwardian house parties and shooting parties seemed to be a core part of the social life before WW1. So you are correct.

["But even the best of times come to an end; when upper class men became the officers in the trenches of Flanders Field and died by their thousands, The Good Edwardian Life had come to an abrupt end."]


Shooting parties continued, even after World War I.

thank you. The Edwardian world may have ended in the trenches of 1914 but the aristocratic, moneyed world did not. The women were still at home, as were the older men and the teenage boys not yet old enough to serve.

I will add two thoughts about post-Edwardian parties. Firstly were all fit male servants of military age called up? If so, staffing house party weekends might have been more difficult than before the war. Secondly were many country estates sold off or leased out to the military, orphanages, schools etc during the war?

Thank you. Most people in Australia and many people in Britain might not like the idea of shooting for sport, but horse racing still appeals enormously.

I just found a book that might be right down your alley. The Long Weekend: Life in the English Country House Between the Wars was written by Adrian Tinniswood and published in 2016. Tinniswood used Graves and Hodge's standard reference as his starting point. He examined the story of the English country house and its owners during this era of social reshuffling.