Prince Ludwig of Bavaria's wedding in 1810

The original Oktoberfest occurred in Munich in October 1810 as part of the public celebrations of a very special wedding, that of Crown Prince Ludwig (1786 – 1868), later King Ludwig I, and Princess Therese of Saxe Hildburghausen. Although the marriage had naturally been arranged for political purposes, most historians suggest that it turned out to be a very happy one. Anyhow, the citizens of Munich were invited to join in the festivities which were held over five days on the fields in front of Munich's gates. There was food and drink, but the main event of that distant festival appeared to be a horse race. 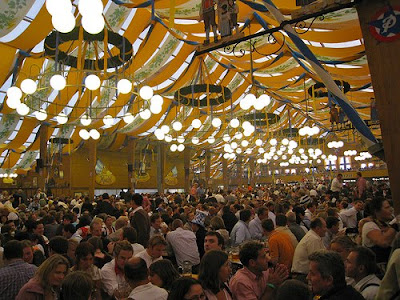 By the next year, 1811, the programme was already starting to expand. An agricultural show was added to the horse race, I am assuming with an eye to boosting Bavarian agriculture. In 1816, carnival booths appeared; the main prizes beautiful decorative objects like jewellery. Swings, slides, merry-go-rounds and wheelbarrow races entertained the crowds. In time Munich’s town council took over management of the festival and in 1819, Oktoberfest became a formal and annual event. It was changed to September, I am guessing, because October is a bit too cool and a bit too unreliable, weatherwise.

Since 1850, a “wedding” parade has become a yearly event and an important component of the Oktoberfest. There is nothing quite as awesome as seeing 8,000 Bavarians in traditional costumes walking through the centre of the city. According to Daniel Wroe, real Lederhosen, the traditional Bavarian men's clothing, are still made from deer leather, not the cheaper cow leather. They last a lifetime and are often passed from father to son. 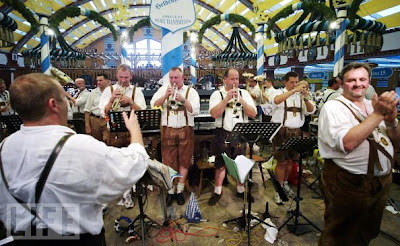 Improvement followed improvement. In 1880, the electric light made the 400 booths and tents blaze brightly at night. In 1881, booths selling Bavaria’s favourite snack foods opened. Beer was first served in glass mugs in 1892. But the humble beginnings had long been inadequate; by the end of the 19th century, people wanted more sophistication, and much more space. The small booths were expanded into large beer halls and large groups of professional musicians were included in the entertainment. Tree climbing games were no longer the cultural highlight of the festival. 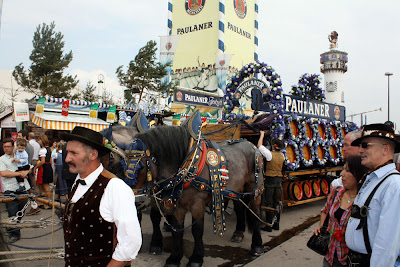 In 1887 the Entry of the Oktoberfest Staff and Breweries began, a vast parade where the breweries competed with  great teams of decorated horses and the Oktoberfest bands marched. This event always took place on the first Saturday of the Oktoberfest and was used to mark the official opening of the festivities. In 1908, the festival built the first roller coaster found on German soil and best of all, in 1913, the huge Bräurosl opened for business. This was the largest Oktoberfest beer tent, holding some 12,000 revellers. 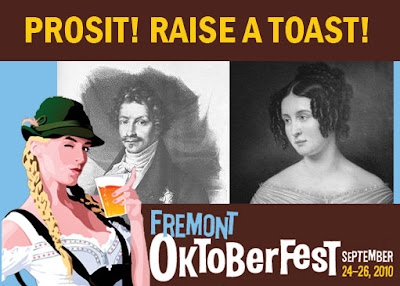 Only six Munich breweries - Augustiner, Hacker-Pschorr, Hofbräu, Löwenbräu, Paulaner and Spaten -were formally sanctioned to serve beer at the festival. But for most people, that is enough. Luckily Oktoberfest beer steins were typically made from heavy glass, with a decorative brewery logo on the side, and big enough to hold a litre of beer! These days, once the beer has been consumed, steins can be purchased in the tents.

Over the decades the festival was occasionally cancelled, because of an epidemic sweeping the city or because German-French warfare had broken out. But mostly the tradition was so entrenched and so loved that it went ahead regardless. Crown Prince Ludwig and Princess Therese of Saxe-Hildburghausen would not recognise the Oktoberfest today. The city hopes this year to break both its visitor record of 7.1 million and its beer drinking record of 6.9 million litres. 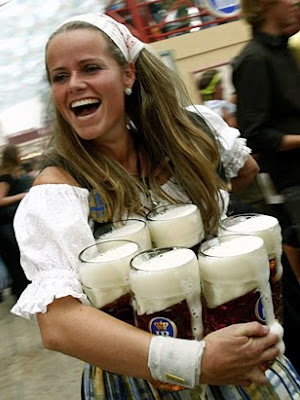 Munich's oldest townhouse, which first opened in 1340, is looking good once again. Visitors can inspect a small permanent exhibition that focuses on beers from Bavaria, including of course a documentary about Oktoberfest. To ensure that the museum is scholarly and not just a commercial excuse for opening yet another beer house, visitors are encouraged to taste the different beers and to eat the traditional foods. This Bier und Oktoberfest Museum, which first opened in 2005, is near Marienplatz.

I had no idea it was based on a wedding! Thank you:)

Kristin, sometimes our most powerful and treasured traditions start as one thing and develop over the decades and centuries as something else. I also was delighted to find Prine Ludwig of Bavaria's wedding nuptials being celebrated by the good burghers of Munich

A few years ago we were in Munich for the Oktoberfest and we enjoyed it thoroughly. It added so much to the trip and as well as gorging ourselves on the art and museums we also had our fill of "bier und wurst" and singing and dancing!

agreed Nicholas, September is the best time of year to be in Munich!

The first time I was there, I thought there would be drunk people staggering around the streets. But as you say, visitors can do everything - galleries, museums, music, Bavarian parades, local food and royal palaces. Beer is just one part of the celebrations.

Actually the German Beer Institute says that specialist Oktoberfest Bier was introduced to the festivities as late as 1871. "The Munich Märzen of the Vienna way became re-Bavarianised in 1871, when the Spaten Brewery introduced at that year's Munich Oktoberfest a reformulated Märzen beer ... now call Munich malt. This new märzenbier was marketed under the explicit brand name of Oktoberfestbier, the one we still use today."

I wonder how the waitress in the last photo manage with the many glasses.

I like the roasted pork hocks they serve in Singapore on this day.

Ann, cool!
What is the connection between Oktoberfest in Munich and the festivities in Singapore? What sort of activities do Singapore visitors have on offer?

Not being a drinker I had no idea. Fascinating.

I read in the newspaper this year that the festival had just turned 200, but I had no idea whatsoever about its origin or history. Very interesting post.

Probably the wedding that grew into the largest celebration in history. I had no idea that the festival began this way.

My father worked for a brewery in the North of England. In 1968, the brewery decided to investigate introducing lager beers. The UK didn't have lager at that time.
As part of the launch, the brewery took its senior managers and their families to the Oktoberfest. We flew to Munich from Manchester. That year was the 10th anniversary of the Munich air disaster - when the Manchester United football team perished. I can remeber both airports having memorials.
As well as the Oktoberfest, they also took us to the wonderful fairytale castle of Prince Ludwig.
Your post has brought back all these memories for me - gosh 42 years ago now..

Hermes, Mr Doolan and Chris, thanks for the comments.

I would normally not enjoy of the commercialisation of a historical or religious event, but I have no doubt that Oktoberfest would not have reached its 200th anniversary otherwise. In fact we could argue that Oktoberfest has put Munich on the tourist map in the post-World War Two years (from 1960 on).

Juliana, what a wise decision for the brewery to take its senior managers (and especially their families) to Oktoberfest in Munich. In times of national crisis or unbelievable tragedies, ordinary families really do need to have a fortnight of relaxation and fun each year.

By the way, did your dad's brewery introduce anything like Munich's märzenbier aka Oktoberfestbier? Did the locals like it?

Gosh, with those stats I have to wonder who the 200,000 people are that go to Oktoberfest and don't drink!

This was a fabulous post! I also never knew how it started and surprisingly (given that I speak Afrikaans and know full well what 'leder' might be) never knew lederhosen were made of leather.

Origins of the hookah come from India along the border of around 1500 Years ago. These hookahs were simple, primitive, and rugged in design, usually made from a coconut shell base and tube with a head attached. hookah

The first time I was there, I thought there would be drunk people staggering around the streets

I have added a reference to the Bier und Oktoberfest Museum in Munich. Here a person can study the many facets of beer making and drinking in a scholarly manner :)