The artist Reuven Rubin, From Romania to Israel

Young Reuven Zelicovici  1893-1974 was born in Galati (east Romania) and spent his childhood and adolescence in Falticeni (in Bukovina, north Romania). The family may have been poor, but they certainly had a horse and cart. Thus the lad was able to travel around. He was exposed to 15th and C16th art in the local monasteries and via the icons in the Bucharest Museum. Inspired by the frescoes, which were on the outside of the Bukovina churches as well as inside, Zelicovici adopted a didactic style himself. 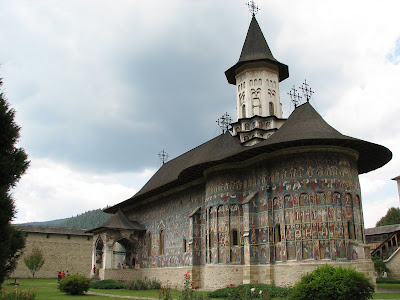 Falticeni was the place where people thought that Zelicovici used the brush with a "godly grace". Yet it was a city with a small population, so I wonder why Falticeni seemed to have attracted a number of national or international celebrities, who were either born or who settled there: writers, theatre artists, painters and scientists. Did Reuven Zelicovici dream of being famous, as he might have been in the more important cities of Bucharest or Iassy?

On leaving Romania in 1912, Zelicovici became Rubin; he studied briefly at Bezalel Academy of Arts in Jerusalem. Then he moved for some years to Paris, studying at Ecole des Beaux Arts and Academie Colarossi. Plus he visited Italy. Some naive works from that era survive eg Houses of Tel Aviv 1912 which is in the Israel Museum. In 1916, he returned to Falticeni, missing his family and home town.

Still unsettled, Rubin went in 1920 to New York, where his work was noticed by Alfred Stieglitz. With the support of this important gallery owner, Rubin had his first one-man show at the Anderson Gallery that year, a large and successful exhibition. The painter met a young woman called Esther on the ship going back to Israel; there may have been a large age difference between them because her parents were sceptical about the union. However they married and had children, and were apparently very happy all their life.

In 1922 the Romanian-educated and French-trained Rubin finally settled in Israel and opened his Tel Aviv studio. That same year he exhibited in the first art exhibitions in Jerusalem, when he was 29. A collection of woodcuts entitled the God Seekers was published in 1923 and he painted a startling self portrait 1923. The maritime nature of his home and studio was very clear. As was his professional position in society as an artist. 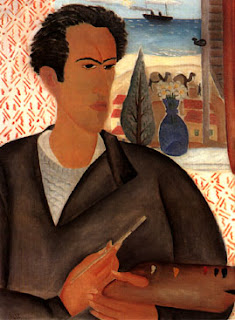 His 1924 exhibit was the first one-man show in Jerusalem; his 1932 one-man show launched the Tel Aviv Art Museum. He was appointed chairman of the Association of Palestine’s Painters & Sculptors. Perhaps Rubin wasn’t at the very centre of the Bezalel movement, but he was gaining a reputation and influence as an important modern painter.

Although academically trained, Rubin's energetic depiction of a Fisherman 1922 looks naïve. It was a reflection of the artist's admiration for the hard working Arab and Jewish inhabitants of the country. Perhaps he loved their close, harmonious ties to the unspoiled world of nature, on land and sea. The bond between Arabs and Jews, and their animals, was often a motif found in Rubin's works.

Rubin continued to be enchanted with Arab and Jewish fisherman throughout the years. He depicted them on canvas spreading their nets into the waters of the Sea of Galilee, along the shores of the Mediterranean, or proudly displaying their catch with their families by their side. Goldfish Vendor late 1920s, one of his most famous, in the collection of The Jewish Museum in New York. What sets this painting apart from similar fishermen images was the single goldfish that had just been removed from the water and was flopping in the fisherman's hand. It is a typical Rubin work from the in its naïve depiction and style: the rounded forms, the flowing contours and the bright colours. 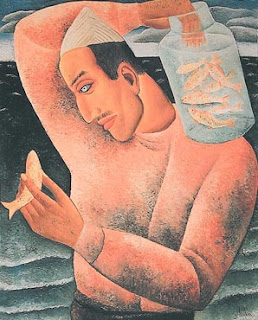 His paintings from the 1920s were defined by a modern and naive style, portraying the landscape and inhabitants of Israel in quite an emotional manner. Then his style changed during the late 1920s and early 30s, from the naïve to an impressionist style. While other pre-State painters had to either earn their living as teachers, or to paint and live in poverty, Reuven Rubin was able to live entirely from his art. His paintings fetched high prices and were especially popular among wealthy American collectors. In particular there was very high demand for his landscapes paintings: The Orange Pickers, Road to Safed, the Road to Jerusalem, Tiberias and The Galilee. 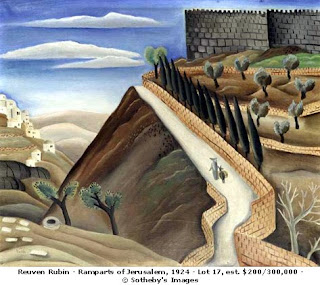 Was Rubin specifically attempting to create an indigenous style of art? Perhaps the modernising, Israelifying tradition had always been with the early Jewish settler-artists of Israel, from the early Bezalel School in Jerusalem (founded in 1906). Certainly these young artists were eager to find a new artistic language through which their unique experience could be expressed. But eventually the young Bezalel artists rebelled against their academic teachers and went to Paris in the 1920s. Reuven Rubin was one of the most important artists who reacted against Bezalel’s classic Western orientation. Instead of 19th century Orientalism, Rubin and his colleagues drew everyday visions of the Near East in a modernistic style.

It was said that Rubin’s paintings in the 1920s-1930s era retained a naive style reminiscent of Henri Rousseau. Rousseau's innocence matched the need to return to basics, because Rubin felt his generation were exiles returning to their ancient land, rediscovering its landscape and remodelling its culture. Rubin might have incorporated Rousseau's influence but I think he was even more impressed with Cezanne. 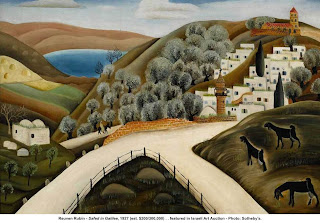 Rubin’s paintings focused on the landscape and life of Israel, but they were not fantastical. His landscape paintings in particular paid special detail to a spiritual, translucent light. It was clear that he had a great devotion to his people, his country and his religion. He may have been Romanian educated and French trained in art, but he became the distinctively Israeli artist!

Rubin put forward two of the losing designs for a national flag, just before Israel became a state in 1948. And he served as Israel's first ambassador to Romania, from 1948-1950. This was totally appropriate for the young man who had left his parents and homeland back in 1912.

In Bialik St Tel Aviv, see that some of the old houses, combining European and Middle Eastern tastes, have been restored. Reuven and Esther lived here and were friendly with Jascha Haifetz, Chaim Nachman Bialik, Leonard Bernstein, Arthur Rubinstein, Isaac Stern, Edward G. Robinson, Ira Gershwin etc who dropped in on them, either in Tel Aviv or on their New York visits. Their Rechov Bialik home and studio has since became The Rubin Museum.

That studio is left just as it was on the day Rubin died in 1973, at the age of 81. Canvases being worked upon still lean on two easels. Everywhere pots and vases remain, filled with brushes. Mounds of hardened oil paints cover the palettes. Rubin had bequeathed his home and a selection of paintings to the city of Tel Aviv a month before his death. 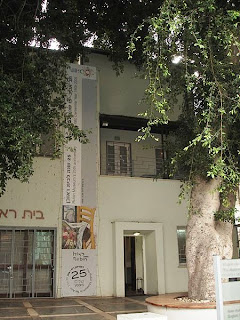 You did not give the year that Rubin was born, so it is difficult to tell if he knew Rousseau and Cezanne well. They may have been drinking buddies in Paris.

I fixed that right away, many thanks Bill.

Cezanne died in 1906 and Rousseau died in 1910. Rubin didn't arrive in Paris till well after these two dates. Therefore he may have known their works from libraries and galleries, but not from meeting them personally.

Fascinating, I really do like his work even though I have not come across it before, the 'Goldfish Vendor' is particularly impressive. Thanks very much for including me within your article, much appreciated.

Wow. I had not heard of this artist before but I love those last two painting of his that you have posted photos of. I love that style. As you say, it looks fantastical but is in fact really realistic.

I had not heard of this artist, but do like his work.

I will show your post to my husband - his grandfather was from Bukovina - so he will also find it interesting.

John, Emm and ChrisJ, my students respond very differently to Reuven Rubin (as they do, of course, to all artists).

My guess is that when Rubin and his colleagues wanted to create a new national style in art, they wanted to show tough pioneering builders of the land and rugged but fruitful landscapes. The landscapes of the 1920s and early 1930s were unusual to be sure, but very splendid paintings.

What a spectacular Monestary. Wish I could see it up close:)

Hels, regarding my Welcome Wall post. You have to nominate people and there's a fee to inscribe a name on the Welcome Wall. There's also an online database that stores all the names and more historical information. You can follow the ’Welcome Wall’ link to find out how do add names.

Kristin, it is pretty impressive, isn't it? No wonder the young artist was impressed - he treated the painted monasteries as an outdoor art class.

To see the Sucevita Monastery fresco better, simply press on my photo. To see many of the others, go to the Romanian web page on The Painted Monasteries of Bucovina http://www.romaniatourism.com/monasteries.html

Enjoyed your blog which is quite accurate too. Have you been to Israel? You should...
Thanks
David Rubin (son of...)

David, excellent to hear from you! Are you involved in the art world yourself?

I do most of my academic research in Europe, especially Britain and Israel, so I am away from Australia every July. I know most about Bezalel in Jerusalem and Bauhaus in Tel Aviv, but my favourite post was about Tower of David art exhibitions during the 1921-6 period: http://melbourneblogger.blogspot.com/2008/11/tower-of-david-days.html

I am not involved directly but my wife, Carmela is the curator of the Rubin Museum. As she is one of the few experts on painting in Israel/Palestine in the first half of the 20th century - I am sure you both would have a very enjoyable conversation next time you are in Israel. We had been to Melbourne 10 years ago when my wife was gathering material for the retrospective of Yosl Bergner which she curated at the Tel Aviv Museum. By the way, if you get to London you can see some of my son's works see www.gideonrubin.com

David, I admire your wife already :)

And what a small world it is! Being a Melbourne woman myself, of course I am going to be very interested in Yosl Bergner. I had seen his Israeli work in Israel and elsewhere, but his Melbourne work largely remains here (http://melbourneblogger.blogspot.com/2009/01/yosl-bergner-australian-years.html).

Many thanks for the url
Hels