Darwin: the man and the city

We know the Dutch were already visiting Australia early in the 17th century. Willem Janszoon and his crew on the Duyfken, for example, charted 300 km of the west coast of Cape York Peninsula in 1606. And so we might expect Australia's northern coastline to have Dutch names. Certainly they created the first European maps of the area and probably they gave Arnhem Land and Groote Island their Dutch names. But for this post I am more interested in visitors to our shores in the 19th century. 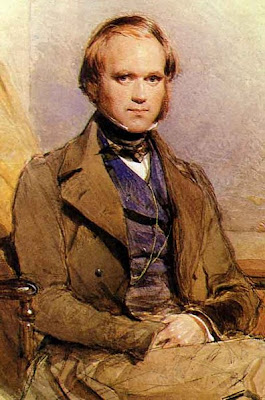 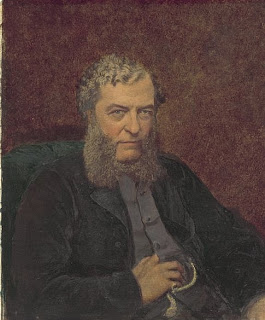 Let me leap ahead to the very young Charles Darwin (1809–1882) who was an English naturalist.  HMS Beagle was leaving for an around-the-world trip in 1831 as part of a very extensive project of exploration and surveying. The ship's captain made inquiries among professors at British universities, and a former professor of Darwin’s proposed the young man for the position of resident scientist aboard the Beagle.

The Beagle trip took 5 long years, along the coast of South America, islands in the Pacific, Australia, Madagascar and South Africa. Early in 1836 Charles Darwin and the rest of the crew spent two months in Australia as part of the round-the-world voyage. During this time, Darwin visited Sydney, travelled on horseback to Bathurst, visited Hobart and called into King George Sound. He also met a number of the colonies’ leading citizens.

The book Charles Darwin in Australia by FW & JM Nicholas gives the definitive modern account of the Beagle’s voyage. It is based on the Australian section of Darwin’s diary, supplemented by extracts from field notes, letters and published material.

Darwin returned to Britain later in 1836. His own book from the trip, published as his Journal and Remarks 1839, described his scientific observations. They formed the basis from which he gradually developed his Theory of Evolution by Natural Selection. Mind you, his book On the Origin of Species didn’t appear until 1859.

The Beagle set off again in 1837 to survey large parts of the coast of Australia, this time without Charles Darwin aboard. The assistant surveyor for this second trip was Lieut. John Lort Stokes (1812-85), a man who had been a Midshipman on the ship’s first survey voyage.

The first British naval man to see Darwin harbour was the very same Lieutenant John Lort Stokes of HMS Beagle in 1839. In Discoveries in Australia, Volume 2, Stokes wrote of the moment in enormous detail. “Before the veil of darkness was quite removed, we could faintly distinguish the mouth of the opening; and the sight at daylight was most cheering. A white bay appearing between two white cliffy heads and stretching away to a great distance, presented itself to our view. Far to the southward, between the heads, rose a small table-topped hill”.

The ship's captain John Wickham agreed to name the port after Charles Darwin, the naturalist who had sailed with both the captain and Stokes on the earlier expeditions of the Beagle. 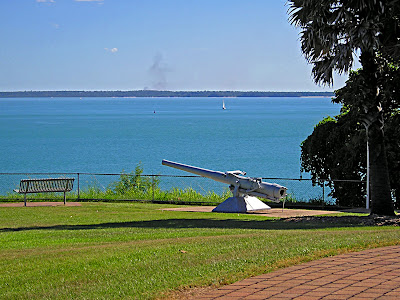 Did Stokes know that Charles Darwin would eventually become one of the most famous men on earth? Of course not. But Stokes did write in his log that it was a great opportunity to honour an old shipmate and friend.

The Beagle finally went home to Britain in 1843, having completed her tasks of surveying and naming about half of the Australian coastline. On this final trip, the officers and crew had been away for six long years.

The Northern Territory was initially settled and administered by South Australia. In February 1869 George Goyder, Surveyor-General of South Australia, established a small settlement of 135 people at Port Darwin. Goyder named the settlement Palmerston, after the British Prime Minister Lord Palmerston. It is not clear whether Goyder knew the name Stokes had given the place, way back in 1839. Perhaps he assumed that the name just related to the harbour, not to the new settlement?

In 1870, the first poles for the Overland Telegraph were erected in Darwin, connecting Australia to the rest of Australia and to other countries. The discovery of gold at Pine Creek in the 1880s further boosted the young colony's development. But until its transfer to the Commonwealth in 1911, the northern most city remained Palmerston. Only in 1911 did Darwin became the city's official name.

Dictionary of World Place Names Derived from British Names by Adrian Room tells us that Charles Darwin didn’t travel far enough in Australia to see Darwin town. He died, an elderly man, in 1882. But that very same year his son Leonard Darwin, still in the army, led an expedition for the Royal Geographical Society to observe the Transit of Venus. The group spent some time in Palmerston!

The Art Gallery of New South Wales is hosting a conference called Charles Darwin and The Art of Evolution (9th Sep 2010). It will explore the impact of Darwin’s theories upon art and other visual cultures and the ways they, in turn, illuminate intriguing dimensions of his theories. The conference will begin by exploring Charles Darwin’s ventures in Australia through art, his contact with indigenous peoples and his collection of 92 Australian species. 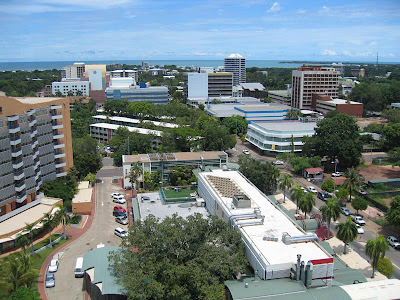 Six years away--wow, you really have to admire those early explorers.

Hels, I saw old maps in the crypt of St. Mary's Cathedral in Sydney. Do you know how Australia got the early name of Great South Land of the Holy Spirit? A fascinating name!

I have to say it again, how interesting. That conference sounds good. I've had several arguments over the years with creationists who object to some things on my blogs,including my admiration for Richard Dawkins, who they seem to regard as the anti-christ. I do so enjoy your posts.

Dina,
When those pre-British explorers searched for terra australis incognito/the unknown south land, I bet they thought they would find a mysterious place and untold wealth.

But "terra australis del espiritu santu" sounds more Catholic than "terra australis incognito", doesn't it? There must have been Spanish explorers looking for Australia in the 17th century!


Hermes, thanks :)
I suppose there must be some anti-science creationists in Australia, but noone has attacked my posts sofar!

However it would be very foolish for creationists to attack this part of Darwin's work - his analysis of Australia's fauna was brilliant. Where would we be without his Journal and Remarks 1839? (Not that careful observation and documentation ever stopped criticism).

Fascinating. City and town names are often taken for granted. Darwin and Charles Darwin share the same name, but I hadn't realised they were related. I had assumed that Darwin had been an Australian explorer or something similar. Darwin must be very proud of the link.

The conference and featuring Darwin through the lens of art is fascinating.

That six-year journey has generated so much controversy. Darwin would probably be astounded.