Lucy Sutherland (1863–1935) had a very ordinary childhood, born in London and raised in Ontario, then taken to the Isle of Jersey from 1871 with her younger sister, Elinor. Lucy’s first marriage was a dismal failure that ended in divorce and poverty, but she had to support herself and her little girl, Esme (1885–1973). Thus Lucy began working as a dressmaker from home.

By 1894 Lucy had opened Maison Lucile in Old Burlington St, in London’s West End. Her first client was her younger sister, Elinor Glyn, later totally famous as a novelist and script writer for films. Lucy quickly gained a loyal following of women, which helped her first shop succeed. In 1897 a larger shop was opened at 17 Hanover Square London.

Sir Cosmo Duff-Gordon was the 5th baronet of Halkin who enjoyed a family estate near Aberdeen. In 1900 Duff-Gordon married this soon-to-become famous London fashion designer, despite her being a divorcee. Lucy Sutherland became Lady Lucile Duff-Gordon.

By 1900 business was expanding further, all through Lucile’s own hard work and talent. Nonetheless it did not hurt that Sir Cosmo's backed and founded “Lucile Ltd” in 1903, to sell her designs around the world. His noble title also helped Lucile’s acceptance at court. 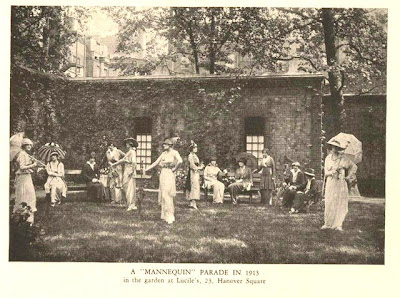 The George St London address was lovely. Inside the large 18th century town house were smart rooms for clients, leading to a garden, and airy workrooms for her staff of 400. And she decorated the interiors beautifully, adding antique furniture and paintings to make upper crust customers feel at home.

Presentations to the specially invited audience must have been splendid. Lucile had a stage built so that women could preview the clothes in comfort, and she installed curtains and scenery for added drama. She trained models in deportment and style, and paid them, so that they could do credit to her clothes. Thus the catwalk show, complete with beautiful walking mannequins, was born. Her style shows specialised in tea-time presentations, palm fronds, music from a string quartet and professionally printed programmes. She became most famous for her lingerie, tea gowns and evening wear, with her trademark style, classical draping and pastel colours.

Her branches of Lucile Ltd in New York and Paris were risky, because she was moving into these foreign centres of fashion culture, almost as an outsider. But apparently her famous fashion parades did well there too, perhaps wooing wealthy women over with traditional English afternoon teas and palm fronds. Perhaps they simply loved the diaphanous, soft materials, scalloped hemlines, silk sashes and sprays of hand-made flower trimmings. I certainly do! 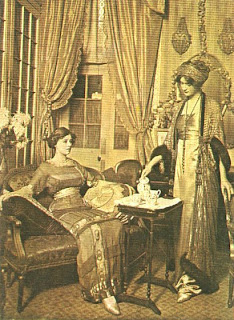 In 1912, Lucile travelled to America on business in connection with the New York branch of her salon. She and her husband, Sir Cosmo Duff-Gordon, booked first class passage on the ocean liner RMS Titanic. I don’t want to discuss the Duff-Gordons experience on the Titanic except to say that during the evacuation, the couple escaped in a less-than-full lifeboat. There was a lot of nasty gossip, but for more detail about the Titanic episode, read Edwardian Promenade.

You might have expected Lucile Ltd to be defeated by World War One. But by 1915 Lucy was spending half the year in the USA where there was no war. The income from her New York shop was so great it apparently helped support the London and Paris branches. And at the very time when Parisian and London couturiers were seeing their businesses collapse, Lucile was reaching her financial and creative peak. She had a staff of over a thousand designers, models, seamstresses and advertising people.

The cleverest of her licensing ventures was a lower-priced, mail-order fashion line for Sears & Roebuck (1916–7), which promoted her clothing in rather lovely catalogues. These ready-to-wear clothes were priced for middle class women who had upper class aspirations.

I haven't space to examine Lucile's important role in exposing lingerie as a luxury item, but people who have an interest in these things should read Cemetarian La Dolce Vintage 's excellent post.

In 1917, Lucile lost a case that had nothing to do with the Titanic. In the New York Court of Appeals case of Wood v. Lucy, Lady Duff-Gordon. It was held that Lucile had a solid contract that assigned the sole right to market her name to her advertising agent, Otis F Wood. She was not bankrupted but her connection with her design empire began to falter, following a restructuring of Lucile Ltd in 1918–9. By Sept 1922 she had ceased designing for the company, and restricted herself to designing for a few individual clients, from private premises.

Lucile had always written a weekly syndicated fashion page for the Hearst newspapers (1910–22), and monthly columns for Harper's Bazaar and Good Housekeeping magazines (1912–22). So she continued as a fashion columnist and critic after her active career ended. Her designs were displayed in Pathé and Gaumont newsreels, and she appeared in the weekly British newsreel Around the Town.

In older age Lucile wrote her best-selling autobiography Discretions and Indiscretions in 1932. Apparently people in the fashion industry in London and Paris were getting their lawyers onto retainers, waiting to see which secrets she exposed. But she was discrete. And she soon died of breast cancer in a London nursing home in 1935, aged 71. She was buried with her husband, who had died in 1931, at Brookwood Cemetery in Surrey. Lucy’s daughter from her first marriage became the wife of 2nd Earl Halsbury and mother of the 3rd Earl of Halsbury. 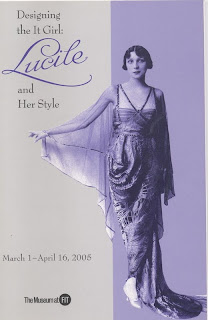 Designing the It Girl, FIT

Lucile's trusted assistant, Howard Greer, published memories of his years working with her in the book Designing Male 1950. A biography of Lucile and her sister Elinor Glyn, called The 'It' Girls, by Meredith Etherington-Smith, was published in 1986. As of 2006, the V&A Museum included a permanent Lucile exhibit. And note an exhibition devoted exclusively to Lucile's work by the Fashion Institute of Technology in NY: Designing the It Girl: Lucile and Her Style (2005). The Victoria & Albert Museum in London published Lucile Ltd by Amy de la Haye and Valerie D Mendes just recently. American Beauty by Patricia Mears was recommended by the House of Beauty and Culture.

After I finished this article, I found some beautiful images in the Lucy, Lady Duff Gordon blog.

The gossip about the Titanic is tantalizing, but tea gowns are just lovely. What an exciting life!

Great post which I will link to on my new blog. I'd heard of her but you filled in so many details - many thanks.

Thank you very much for your lovely article and for mentioning mine, Hels. If only we could travel back to the Edwardian era and wear dresses by Lucile!

Thanks everyone. In first semester the students were reading on the connection between social history and women's fashions, starting in the Regency period. They decided there was no classier, more comfortable look than Edwardian tea gowns. No bustles, no whale bone cages, no corsets that stopped proper breathing.

cp
what a ripper of a life, hey?

You will find one excellent reference in the post itself (the blog called Lucy, Lady Duff Gordon) plus the book I suggested: Randy Bryan Bigham's Lucile--Her Life by Design: The Story of Lady Duff-Gordon.

For an excellent history of Paris fashion houses, see "The Construction of a Couture House" in Edwardian Promenade,
http://edwardianpromenade.com/fashion/the-construction-of-a-couture-house/

I wonder if the same exploitative conditions were prevalent in Duff-Gordon's establishments in Britain.