I have lectured on Jewish Artists of the Belle Epoque many times in the past. What never fails to amaze me is the difference between the dozens of Eastern European lads from impoverished families on one hand and the elegant Italian Amedeo Modigliani (1884-1920), son of a very comfortable family, on the other.

Amedeo was born in Livorno/Leghorn, west of Florence in 1884. His parents were business and professional people, both sides of the family being Sephardim. Amedeo was their 4th and youngest child, frail throughout childhood. Bored witless in bed, it was then that he began to play with painting. Alas the young lad became seriously ill with typhoid fever and tuberculosis, and was close to death. 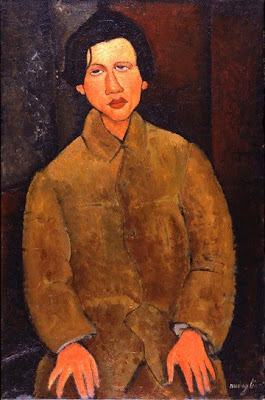 Eventually he recovered and had formal art training in Florence and Venice. But he already saw himself as tormented and on the path to self destruction. So it was quite risky when he decided to move to Paris in 1906 and to settle in Montmartre, the centre for Bohemian artists and writers. He settled in Le Bateau-Lavoir, a commune for impoverished artists where each person had at least enough space to sleep, paint and drink coffee. There probably wasn’t much food in the entire rambling building complex.

There Modigliani was thrilled by Paul Cezanne, the artist who came to exert a decisive influence on Modigliani’s early years, as did Pablo Picasso in his blue period. Of the sculptors, his greatest mentor was the Romanian Constantin Brancusi, another recent immigrant to Paris.

Modigliani was a sculptor who modelled his work on African art, particularly tribal masks. When he could no longer carry out the heavy physical work required by sculpture, he turned to painting. The use of strong line and elongated shapes, so typical in his African-inspired sculptures, was carried into his portraits. I am never quite sure if modern viewers find his style simple, powerful and expressive.. or childish and repetitive.

Modigliani's portraits, rather quickly completed, came out of the positive emotional connection between the artist and his model. Very often he would use his artist friends as models, presumably to save himself the cost of paying a modelling fee. Instead he would share his food with his artist-friends who had no food of their own. He exhibited six of these portraits at the 1910 Salon des Independants, allowing the public to see a groups of his works for the first time. 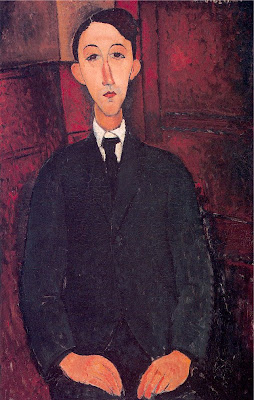 The pre-WW1 period saw the Paris art scene shift south from Montmartre to Montparnasse. Picasso and Modigliani moved to rue Campagne-Première, joined by Miro and Kandinsky; Braque worked nearby. Belle Epoque cabarets gave way to WW1 coffee shops and bars, heaps of them along bvd du Montparnasse: the Coupole, Dôme, Select, Rotonde and Closerie des Lilas. Often frequented by impoverished artists and writers, I can imagine the bar owners agreeing to barter coffees and wines for drawings and quick paintings.

I have selected just two of Modigliani’s artist-friends who agreed to act as models. Chaim Soutine 1916, later hunted to death by the Nazis, was his closest friend. By applying the paint strongly and thickly, Modigliani made Soutine look like the unpretentious Eastern European man he was. Manuel Humbert 1916 was a Spanish painter of landscapes and also a friend of Modigliani. In this insightful portrait, Modigliani drew attention to Humbert's eyes and sensual mouth. In both cases, the artist captured the character of his friends with appealing simplicity.

For other Modigliani portraits, see Paulo Coelho’s Blog, The Bespoken: For Gentlemen, Chasing Light and Lines and Colors.

The sophisticated Italian was a role model for the other immigrant Jewish artists and went out of his way to be friendly to, and supportive of the younger men arriving in Paris from Eastern Europe. Moise Kisling and Simon Mondzain never forgot Modigliani’s kindness, and Andre Salmon lived across the street and often shared his meals. But no-one relied on Modigliani as much as Chaim Soutine did, professionally, socially and emotionally. Soutine was totally devastated when his friend and mentor died in 1920.

The book Modigliani: A Life was written by Meryle Secrest and published by Knopf just recently (2011). I have read many biographies of the artist, but Secrest is the first person to suggest that it was the struggle AGAINST tuberculosis that was the cornerstone of his decisions and behaviours, not the disease itself. And certainly not alcoholism or drug addiction. In a life that he knew to be short,  Modigliani used alcohol and drugs only as the means by which he could keep functioning as a prolific painter.

What a fascinating post. I was surprised how much those pictures affected me. Thanks.

Great post! I've always been intrigued by Modigliani, but as of yet have not done much research about him. I've often wondered why he is overlooked and under-appreciated in many art history texts. At first reaction, I would say it is because his artwork is very repetitive (as you mention), but then again, so many major artists were repetitive in style (i.e. Picasso, Pollock, Rothko).

The Paolo Coelho link is quite fun. It's fun to see the great writer's opinion on Modigliani.

Personally, I really like Modigliani's aesthetic and style. I find it to be very expressive.

Thanks Hermes and M. Modigliani was a very clever artist, extremely handsome and a truly great friend to his many colleagues.

But the question haunts us: why did a man who came from a well educated, rather comfortable and loving family in Italy live a life of grinding poverty, alcohol abuse, drug abuse, sexual promiscuity and general dissolution in France? He loved his family and would have been helped by them in a heartbeat, even if he wasn't making enough money from art.

A very educational post, as usual. A pleasure to read and learn.

I have nothing really to add to the comments already posted. I just wanted to say thanks for posting this truly interesting article, but also to say how much I have always loved Modigliani's work.

The times, especially in Paris, seemed to call for a certain artist's identity. I think it's not the cliche of the starving artist for nothing.

I can't count how many times I've heard the idea that if one is not suffering, one is not an artist.

I have always been fascinated by Modigliani's work. I remember in some lectures I attended in the past, the lecturer was trying to make a case for some artists' unique vision being due to actual physical defects in their eyes causing them to perceive a distorted view of the world. He cited El Greco, Modigliani and Parmigianino as examples. I guess, that is a rather pedestrian way that talent can comment on genius...

As far as Modigliani's dissolute life is concerned, it is mirrored by Toulouse Lautrec and several other scions of well-to-do families who follow the artistic life as a means of rebelling. There is an element of degeneracy inherent there, I think, and it may represent a way of breaking free from the tight constraints of social position dictated by money and class?

Chris and Nicholas, there is indeed an artistic mystique about suffering, especially as you say amongst the scions of perfectly respectable middle class or wealthier families.

In Paris, in particular, the artists were very fortunate. An old pavilion from the 1900 World Fair was remodelled as low-cost studios for artists by Boucher. La Ruche may have been pretty squalid, but he really did want to help young artists who were a long way from home.

I am coming back to Modigliani in a conference paper, as I often do. But my question now is marginally different. As a man who saw himself as tormented and on the path to self destruction, how did his art come to characterised by measure, control and harmony (and not by chaos and passion)?

I have added a reference to Modern Art Mecca: Paris Between the Wars
in the blog called ineedartandcoffee. Basically Thomas is suggesting why many of the most glorious pages in cultural modernity were written here, by French artists of course but particularly by the thousands of outsiders who flocked to Paris.

Since this blog post was published, a new and relevant book has appeared in the art bookshops called Modigliani: A Life by Meryle Secrest.

Ms Secrest is an author I am always citing in lectures. Some of her other subjects include Frank Lloyd Wright, Berenson and Duveen, Leonard Bernstein and everyone else I blog about.

In honour of the 2014 Modigliani exhibition at Palazzo Blu in Pisa, the blog Tuscany Arts has a gorgeous photograph of each Modigliani home in Livorno. Some of them have disappeared forever; others have completely changed due to time and history.