Empress of Ireland: a 1914 shipping tragedy

In the hundred years before WW2 started, tens of millions of people left Europe in search of a better life in the New World. It was as though everyone was on the move, and no city did better out of this movement than Liverpool. 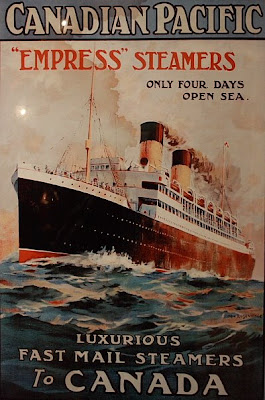 Advertising poster for the two Empresses, 1906 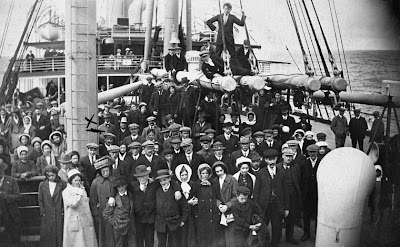 Leaving Europe, immigrants to Canada on the Empress, 1910

The Empress of Ireland left Quebec City for Liverpool on the 25th of May 1914 with 1,477 passengers and crew. It was sailing down the Saint Lawrence River and sank after a collision at 2 AM with a Norwegian ship, in impossibly dense fog. If people would like to read the details of the crash, I recommend two blogs: Curling History  and the Nineteen Keys and the Lure of a Furious Sea.
*
Most people on board were sound asleep in their cabins. The liner sank in 14.5 minutes and the only people who escaped were those on the upper decks; they had time to get out of bed and into life boats, before their cabins were flooded. Had all the passengers been awake, they were so close to shore (6.5 ks) they could have practically saved themselves on local fishing boats.

This accident claimed 1,024 passenger and crew lives, making it the most catastrophic maritime disaster in Canadian history. Compare this tragedy with the better known Titanic when 1517 people died, only two years early. 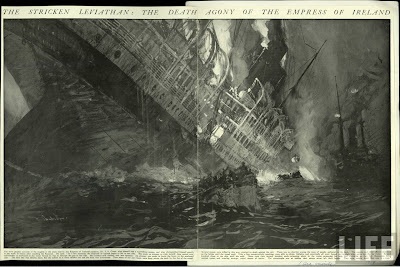 Sinking of the Empress of Ireland, Life Magazine, 1914

The sinking of the Empress of Ireland in May 1914 was a totally unplanned civilian accident, not an act of war. But I wonder if people in Europe already felt that war was imminent and that 1914 was going to be their last opportunity to find a new life abroad. And World War One did indeed start in September 1914.

The irony was that the Empress was on a return trip TO Liverpool when it sank. In fact the passengers included a large delegation (167) of members of the Canadian Salvation Army band who were excited to be going to London for an international conference. At Mt Pleasant Cemetery in Toronto there is a moving monument to those 167 drowned Salvation Army delegates.

The Empress of Ireland Pavilion in Quebec presents the history of the Empress of Ireland, from its building in the Liverpool docks in 1906 to its tragic sinking in Quebec in 1914. In particular it displays artefacts from the wreckage of the ocean liner. The Pointe-au-Père Lighthouse, which was erected in 1909 and is one of the tallest in Canada, played a central role in navigation history on the St Lawrence River.

On the other side of the Atlantic, exhibitions are at the Merseyside Maritime Museum in Liverpool. The former Titanic, Lusitania and the Forgotten Empress gallery on the first floor of the museum closed in 2014 and the space has now reopened as a new gallery Lusitania: life, loss, legacy. 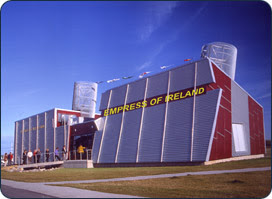 Genealogy Canada blog noted that the ship is basically still intact today, lying at the bottom of the river near Point-au-Pere. History Center recorded that the owner of the Norwegian ship, the Storstad, was later forced to sell her for $750,000 after a law suit was won by the owners of the Empress of Ireland for $2,000,000.

I'd forgotten about this - really interesting to read this and to follow up the links.

My feeling is that this was simply a terrible peace time catastrophe. Had it been an intentional war-time bombing of innocent civilians, like the Luisitania only a year later, people would have been outraged. The Merseyside Maritime Museum in Liverpool is good, but it could have been made much bigger.

Your entry inspired by Simon Mawer's The Glass Room won't download. When I click on it in my favourites I get a messsage that this posting does not exist. I'm curious to read what you have written as I have just read that book.

After the law suit was won by the owners of the Empress of Ireland for $2,000,000, did any of the money go to the widows and orphans of the passengers in steerage? Probably not.

In fact a great deal was known about the passengers in first and second class, but I wonder how many details were ever known about the poorest of travellers on ships, beyond their name and country of origin.

For a great comparison, look at the first class passengers on the Titanic. We know their name, age, normal address, profession, wife's name, wife's profession, nationality etc etc. We also know if they were travelling with maids and manservants, and their names.

My cousins drowned in the Empress disaster; they were George Philip Felstead in second class ansd his wife and two children in third class. I understand that he was in the Salvation Army Band which entertained second class passengers. I should be gratedul for any information about the family.

I had a distant relative on the Empress of Ireland, his name was Edmond Fishwick...He was also in the Salvation Army Band.

There is a photo of him about 3/4 of the way down this page (he was known to the family by the name Ted)...

it is a horrible story altogether, even after almost 100 years. It claimed 1,024 passenger and crew lives, including Salvation Army delegates to the international conference, making it the most catastrophic maritime disaster in Canadian history.

I hope that you can both find good family records and photos for the young men who died on board.

Read Confessions of a Ci-Devant at
http://garethrussellcidevant.blogspot.com.au/ for information about a Canadian documentary of the tragedy, made in 2005.

I came across your name on Genealogy Canada and I noticed that you have an interest in the Empress of Ireland that sank in the St. Lawrence River on May 29th, 1914. I just wanted to let you know that I have been researching the ship since 1995 and still doing it. But I am not only researching the accident but every aspect of the Empress from 1906 to 1914 and thinking about writting a book or two on the subject.

If you would like to visit my web site which is constantly being added with new information the address is theempressofireland.com or you can also reach me through Facebook at The Empress of Ireland or Twitter at RMSTheEmpress.

If you happen to have any information on the Empress and would like to share I would be most grateful. I have in the past made a few contacts in Australia before.

many thanks. I put your letter in the Comments Section because so many people seem to have an interest in the Empress of Ireland and other Edwardian or WW1 ships.

If you do get your book to the publication stage, I really would love to review it.