The concept of "healthy living" witnessed the peak of its development by the late C19th and early C20th. Once most people had left the countryside and moved into city life, the seaside held a held a special position in peoples’ thinking as a place of cleanliness, good health, fresh air, exercise and above all fun. But when more pleasure-orientated themes emerged in the late C19th, seaside holiday resorts had to compete with man-made entertainment centres, often water-based.

It was largely in Germany that the healthy living movement concerned itself more with rigorous exercise, good food and fresh air, and less with fun and relaxation. Max Liebermann and other artists documented young men swimming, running naked and staying fit. [Of course as soon as I say that, Victorian/Edwardian Paintings produces muscle-rippling images by British artist Henry Tuke who depicted young, athletic male nudes basking in the sun on a Cornish beach]. 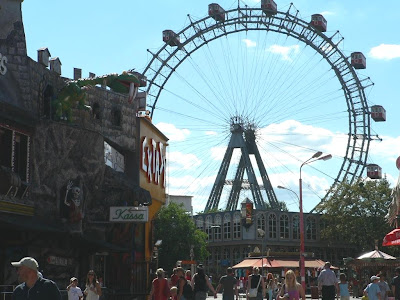 Examine some sporting and entertainment centres of the late C19th. St Kilda Baths is an old Melbourne institution which I have photographed in this blog before. The cold sea baths and hotel on St Kilda main beach were originally called the Gymnasium Baths 1862. Since swimming from the open beach was prohibited during daylight hours, bathers were obliged to keep within the walls of the baths. The complex must have been quite exciting because it included a gymnasium, refreshment rooms and a swimming space in the bay that was protected from sharks. How clever of the designers to maximise the entertainment opportunities offered during the hot months. The hot sea baths and changing sheds came later, but eventually it all burned down and was replaced with a piece of exotica called South Pacific, complete with Arabian style façade (sic).

Vienna's World Expo of 1873 was built in Prater Park, located on Danube and Canal on an isolated island in the NE part of the city. The arrival of coffee-houses and cafés led to the start of the Wurstelprater, but it was never a centre of active sports; its c4,000 acres included more leisurely entertainment: lawns, gardens, landscaped lakes, forests. The 61 m in diameter Riesenrad wheel, at the entrance of the Prater, was not erected until 1897, to celebrate Emperor Franz Josef I's golden Jubilee. For wonderful photos of the 1873 Expo, see the Dinosaurs and Robots blog.

Cabaret Berlin said that until 1933, one of Europe's largest amusement park was Luna Park in the Halensee area of Berlin at the far end of the Kurfüstendamm. It featured a water slide, swimming pool,  theatres, jazz and cabaret stages, dance halls, Bavarian-themed beer village, nightly fireworks displays and boxing tournaments. The restaurants and bars could seat 16,000 people!

The 1893 World's Columbian Exposition in Chicago was the first world's fair with an area for amusements that was specifically removed from the more serious exhibition spaces. Midway Plaisance included carnival rides, side shows and the John Phillip Sousa band. But above all it had the original Ferris wheel, designed by George Washington Ferris, as an entertainment centrepiece. It consisted of an upright, rotating wheel, with passenger gondolas attached to the rim. Brian Karpuk at newsburglar suggested the Ferris Wheel was the Chicago Expo’s answer to the 1889 Paris Expo’s Eiffel Tower. 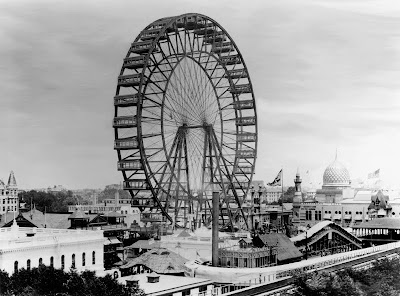 The Kursaal Amusement Park and Gardens at Southend On Sea in Essex was the brainchild of some local professional men who bought land in town to build a new park, for both residents and holiday makers. This Marine Park and Gardens section opened in 1894. The Kursaal section was completed in 1901, with a great silver dome over the entrance. Presumably the spa part of the complex was intended as a place of healthy amusement. The other fun facilities included a circus, ballroom, arcade with amusements, dining hall, games rooms an extremely long pleasure pier. Livepoets blog has wonderful seaside resort images from after the turn of the century.

Perhaps the most amazing entertainment, amusement and healthy living centre was in Edinburgh. The Royal Patent Gymnasium was designed by businessman and philanthropist John Cox. Cox had decided that Edinburgh citizens required somewhere to exercise and improve their physical fitness, and conceived the idea of using a large sheltered area in the northern part of Edinburgh New Town as an open-air pleasure-ground for the 'promotion of healthful recreation'. Opened in 1865, it was definitely part of the commitment to healthy recreation.

As you can see from the 1867-68 advertisements, the Gymnasium's showpiece was a giant rotary boat for rowers. In addition, the Gym also provided equipment for outdoor games in summer and ice-skating in winter. It included an extensive exhibition hall, erected in 1868; a velocipede merry-go-round, 160’ in circumference; a gigantic see-saw, 100’ long; extensive ponds with supply of small boats and canoes; swimming baths; a training bicycle course, with bicycles for hire; and an athletics track. Brass bands played music on weekends. For a 6d entrance fee, each customer bought a great deal of exercise and fun. 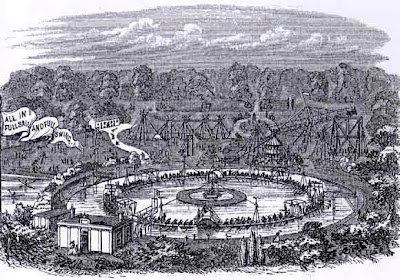 The Royal Patent Gymnasium was hugely popular, until the end of the century when all the equipment was taken away. The site later became a football pitch for St Bernard's Football Club.

The Purkersdorf Sanitarium in Vienna was not an amusement centre, but it was not a hospital either. And it really wasn't late 19th century either, starting as it did in 1903. But it _was_ part of the healthy living movement, available to that part of Viennese society who could afford its mineral baths, physical therapies, therapeutic massages and physiotherapy. Through silence, exercise, fresh air and rather austere architecture, cures of the new illnesses such as nervousness, and hysteria were sought. Fortunately for the residents, reading rooms, card rooms, table tennis, billiards and music were also provided.

A very similar sort of sanatorium was identified by ThinkShop and at the very same time. Max Bircher founded a sanatorium in Zürich in 1904 and, because it was based on harmony between people and nature, he called it Living Force. As at Purkersdorf, this clinic appealed to the well heeled who flocked there to rejuvenate their bodies and souls. Again like Purkersdorf, the residents had to follow a somewhat rigorous daily schedule that involved early bedtime, physical training and active gardening work. But Bircher added another element, perhaps his most important contribution to healthy living: the healing power of raw fruits, vegetables and muesli.

Thanks Hels fore adding that link :-)

With thanks to the Cabaret Berlin blog, I have added a reference to Luna Park at the far end of the Kurfüstendamm in Berlin. Outdoor, health-giving fun plus a dash of early 20th century jazz and beer?