By the late 19th century, the old George St Markets in Sydney were no longer suitable for the centre of a grand, bustling city. Architect George McRae was asked to design a large commercial building on that very site, in an elaborate late Victorian style. He had plenty of skilled craftsmen to chose from, because the terrible depression of the early 1890s had devastated the states’ economies. The work was completed in 1898 and promptly called the Queen Victoria Building. 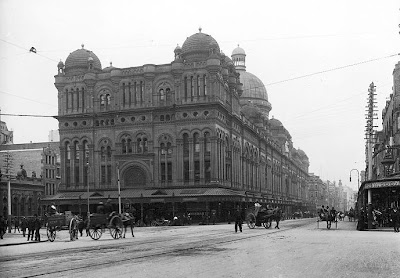 The dominant feature was and is the central dome. You cannot see the interior glass dome and a copper-sheathed exterior, but you can see the large domed cupola from the outside. And you can see smaller dom­es along the length of the roofline, including the small end domes. Stained glass windows were inserted to encouraged natural light into the central business area. The Queen Victoria Building, according to the Living in Mexico blog had an impressive façade: a great Romanesque Revival pile of dun-coloured stone, meant to suggest the might and permanence of the British Empire. Lulo Designs blog in Queen Victoria Building in Sydney, Australia has the most beautiful photos of the interior, particularly the stained glass. 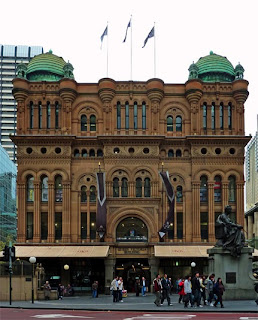 
Once completed, the original building included offices and shops for trades people, showrooms and a concert hall. In the inter war period (1935) new interior fittings were installed, including lights, balustrades, new doors, new windows, supporting columns and better air circulation. And the concert hall was sacrificed for a city library and offices for Sydney City Council.

In the 1950s, when deteriorating 19th century buildings were being torn down and replaced by modernist concrete blocks, the Queen Vic­toria Building was slated for demolition. Miraculously, as a result of professional and public uproar, the derelict building was restored in the mid 1980s. Street Traveller blog in Sydney Queen Victoria Building noted the new shopfronts, glass signage, glazed balustrades, mirrored escalators connecting ground, first and second levels and new colour schemes. Now used for very classy shops, QVB has four main shopping floors, the top ones surrounded by neo-Victorian cast-iron lace work. Much of the original tilework was saved. There are arched skylights running from the central dome along the length of the building, but I cannot tell if they were original, from the 1935 improvements or the 1980s rebuilding. 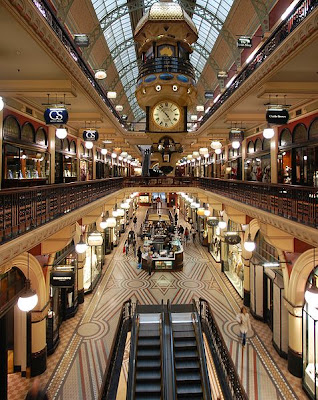 
Style and Relax blog was very impressed with the royal feeling of today's building. In Royal Shopping in Sydney - Queen Victoria Building, she recommended that shoppers could bask on the glorious sights of stained glass windows, painted ceilings, majestic and intricate clocks that were given to the Queen, an antique lift and regal staircases.

The interior was so beautiful like that. I am so disappointd that they decided to modernise so much of the it this year and have replaced the heritage style wooden signage with modern glass and metal ones. I'm also not impressed with the new colour schemes which I think are mismatched and don't suit this heritage building. Queen Victoria Building post

What a great escape for such a beautiful and grand building. It may not be as accurate decoratively as perhaps it should be, but at least it is still standing and can be rectified, when so many others have been lost entirely due to fashion tastes and thoughtlessness for future generations.

I love your blog. Wih all the links, twenty minutes of intense focus. Wonderful. I live in a land of modern malls. If only we had just one from the nineteenth century.

I visit Sydney every year and try to go to the QVB at least once each time! It's a wonderful building to explore and I was so glad that it was restored. We lost so many of our heritage buildings. This was mainly due to a certain person called Joe!

Your blog is a real education about architecture, the historical accounts and your eye for detail makes one appreciate fine buildings even more. Your interests lists the Bauhaus; Paul Klee and Vassily Kandinsky were once tutors there in the thirties, where they tried to fuse art, architecture and crafts at the school. Hope you can start a discussion on Walter Gropius, the Bauhaus and Modern art which emerged from that experiment.

You are quite right, Errol - heaps of my posts concern The Bauhaus. I have never thought very much about modern art which emerged in and from The Bauhaus, being mesmerised instead by architecture, design, the decorative arts, even theatre sets and costumes.

Let me look at my Bauhaus folios, to see which paintings stood the test of time. Many thanks.

it is heart breaking in modern countries when developers destroy our few, precious late 19th century architectural treasures. And for what?

Now I have found an amazing mid 16th century trading floor and fancy shopping centre in London that has been preserved. Well destroyed twice and rebuilt twice, but by acts of God, not acts of developers.