With the passing this week of Richard Pratt, Australia's greatest philanthropist, I was reminded of a lecture I once gave at his amazing home, Raheen. It was an analysis of their William Dobell portrait of Helena Rubinstein.

William Dobell (1899-1970) was born in Newcastle. In 1916 he was apprenticed to a Newcastle arch­itect and later moved to Sydney to work as a draftsman for an ar­chitect­ural metalworker. In 1925 he enrolled in evening classes at Julian Ashton's School, as had George Lambert, Charles Conder and Elioth Gruner a generation earlier. Arthur Streeton’s art was intr­o­duced to Sydney audiences by the very same Ashton.

In 1929 Dobell won the Society of Artists' Travelling Scholarship and travelled to England to study at the Slade School. He used the time well, travelling across Europe, and his work from this era already start­ed to have exaggerated emphasis on characteristic forms, espec­ially solemn, elongated fac

Expressionism was the use of distortion & exaggeration for emot­ion­al effect. It was used to raise subjective feeling above objec­tive obs­ervation, refl­ec­ting the state of mind of the art­ist rath­er than imag­es that con­formed to the external world. It is said he owed a direct debt to the witty Expr­es­s­ionism of Chaim Soutine eg Woman Knitting 1924. I’d also add to Amedeo Modig­liani eg the double portrait of Jacques Lip­chitz and his wife Bertha 1916.

After 2 years, Dobell returned to Australia, working, teaching and later becoming a war artist. The first large portrait I can find is The Cypriot 1940 and even at this early stage, Dobell was int­erested in every shade of his friend Aegus Gabrielides’ character. Some­times he exaggerated aspects of the sitter to make a point: the arms were longer, the fingers more tapered, the facial hairs dark­er than the preparatory sketches showed. Even the shirt str­ipes and folds coop­erated to make an artistic statement. I wonder if Dobell had seen El Greco’s portrait of Fray Hortensio Felix Par­avicino c1609. Both sitters looked dark, exotic, Greek. 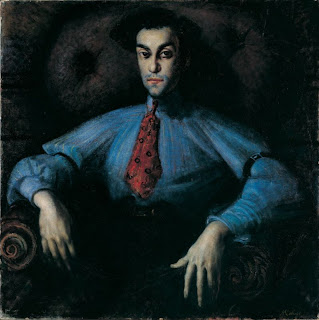 ALTAMORE UNABASHED blog in Inspiration: William Dobell said that Like Otto Dix and George Grosz, Dobell ex­aggerated his subjects to the point where it be­came caricature and it seems that's what caused him a big problem with the Archibald. I would add that Dobell’s exaggerated body shapes and vigorous brush work were not just elements of expressionist tech­niques; he was also interested in satire. Aus­tral­ians have always admired a somewhat mocking outlook

It took a long time before he showed his work. His first solo ex­hibition, held in 1942, was called Margaret Preston and William Do­b­ell loan exhibition, AGNSW. Perhaps the delay was caus­ed by the con­tro­versy surr­ounding the portrait of Joshua Smith in 1943. Port­rait of the Artist Joshua Smith had been awarded the Archibald Prize, but it was contes­t­ed in 1944 by two unsuccessful artists. They brought a lawsuit ag­ainst Dobell and the Gallery's Board of Trust­ees on the grounds that the pain­t­ing was caricature and not a portrait. Dobell was unmarried and rumoured to be gay, which didn’t help his cause.

In any event, the award was upheld but the 2 year trial left Dob­ell emotionally devast­ated; he retreated to the countryside, to paint safe topics ie landscapes. Dobell may have been fragile but he con­tinued to win important prizes: his portraits of Margaret Olley 1948 and Dr EG MacMahon 1959 won the very prestigious Arch­ibald Prize. 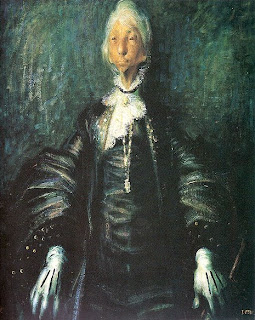 Helena Rubinstein (c1870-1965) was an astute businesswoman who had been born in Europe but who escaped a potentially insufferable marriage by fleeing to Australia in 1894. She sold skin care creams in rural Victoria, helping Australian women with their dried, wind burnt skin. Later she opened her first beauty salon in Eliz­abeth St Melbourne, with the help of wealthy, well connected friends. Rub­in­stein didn’t leave for London with £100,000 to invest until 1908.

Towards the end of her life she put her considerable assets, c$100m, into the Rubinstein Foundation, dedicated to preservat­ion and prom­ot­ion of the arts and into welfare. Dobell painted Rubinst­ein in 1957 when she was on a return visit to Australia. He was already a famous art­ist by this time, and she was an elderly and very famous cosmetics manuf­act­urer. Dobell must have enjoyed the commission because he did many versions of Rubinstein’s port­rait. This vers­ion was rich, bejewelled and monumental, even though the woman herself was quite slight. He perceived her alert and int­e­l­ligent character, and projected it with bold brushwork. She died in 1965 but her famous portrait still hangs proudly at Raheen. 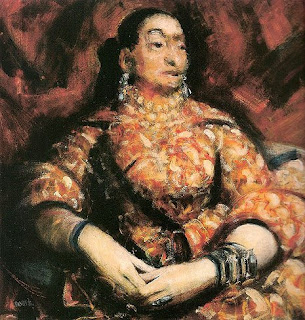 Gay News In Greek blog wrote in WILLIAM DOBELL that his 1957 works were recognised as among his highest achievements. By then, he was able to pick and choose from many offers of commissions. He won his third Archibald prize in Jan 1960 for a port­rait of his surgeon EG MacMahon. That year he did the first of 4 portraits commissioned by Time magazine for cover illustrations. His career, and fame, were assured. Dobell went on to receive a Knighthood in 1966, then he died in 1970. He left his work to The Sir William Dob­ell Art Foundation.

Dobell’s broad, expressive brush strokes made his portraits elongated and distorted. They reflected a subjective view of the world and in Australia, they were un­ique. He was arguably Australia's most talented & successful portraitist.

Wonderful portraits, Hels! The painting of Helena Rubenstein really shows her ambition and astuteness, I think.

Fancy lecturing at Raheen! That must have been quite an experience. Very impressive.

Speaking of William Dobell always reminds me of how uncultured I was as a teenager - at least as far as art was concerned. My Auntie gave me a card with a picture of a painting by Dobell and I stupidly asked her who he was. She WAS NOT A HAPPY AUNTIE! I did know much more about literature.

Hels, thanks for a wonderful article on Dobell (one of my favourites)brightened by your personal involvement with the painting and with Pratt.