Irenebrination: Notes on Art, Fashion and Style tells us that the innovative shopping experience promised by Selfridge’s was the result of the vision of Gordon Selfridge, originally manager of Marshall Field, Chicago. This American businessman planned to open an American-style emporium in London that could give shoppers a pleas­urable day out as well, presumably, as making a fortune for himself. 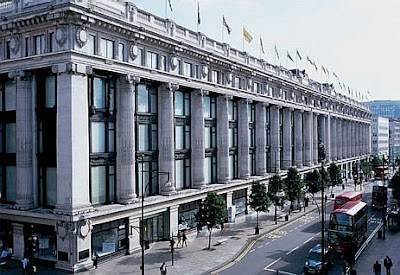 Foundations for the department store were laid in early 1908 and by 1909 the building opened. Taking up an entire block in Oxford St, the neo-classical columns, impressive entrance and rich decor­at­ion became a veritable temple to shopping. You can see the Queen of Time clock over the entrance, with its classical sculptural programme.

600,00 personal invitations had been sent out in the days before the opening, inviting everyone in Britain to come to see the Selfridge's during its first week. Orchestras played music and masses of flowers filled the interior. 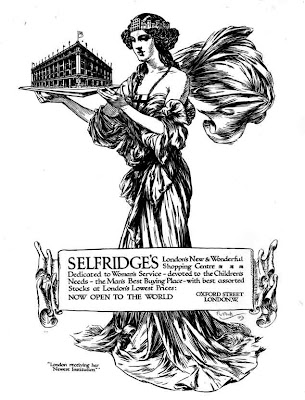 Invitation to the opening

Selfridge wrote a book about retail­ing, entert­ainment and success called The Romance of Commerce; he should have called it the Religion and Politics of Commerce.

Timing was critical. Gordon Selfridge founded his store just as the women's suffrage movement was becoming successful and the London Underground was bring­ing respectable ladies into town. To make shop­ping easier and more pleasant for women, Selfridge opened the first in-house coffee shop, roof top restaurant and ladies bathrooms. It was all designed to make a day of shopping in the city something a respectable lady might thoroughly enjoy. 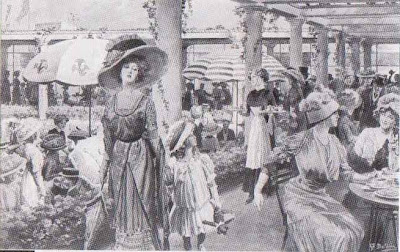 Gordon Selfridge was an important supporter of the women's movement. He even refused to press charges when a suffragette broke one of the store's enormous plate glass windows. And it is said that Selfridge’s flew the Suffragette flag on its roof! I wonder why he was so supportive. Selfridge said independent women would be his best customers. But it would be interesting to know if Mrs Selfridge was pushing him.
*
For their part, suffragettes believed that fashionable, feminine dressing was important. Barbara Caine in Australian Feminism and the British Militant Suff­ragettes wrote Suffrage demonst­rations were very much costumed affairs. Unlike their later counterparts, early C20th feminists regarded fashion as very important. Christabel Pankhurst urged: “Suffragettes must not be dowdy” and urged the women to outfit themselves approp­riately.
* 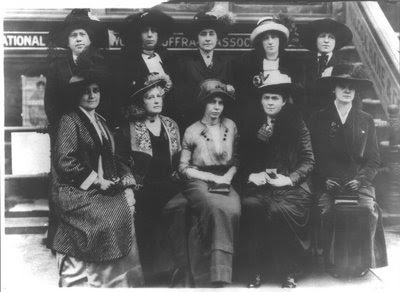 Every suffrage group developed a close relationship with a particular West End emporium, which fitted them out appropriately. They also published attractive advertising in the pages of their weekly papers. The moderate suffragettes chose as their stores Derry and Thom, or Swan and Edgar, or Burberry, shops that provided sen­sible coats and skirts, silk blouses and serv­iceable overcoats at moderate prices. This was the kind of outfit that, as the advertisements sug­gested, allowed for comfortable move­ment. The more militant suffragettes chose the classier Selfridges which offered a far more elegant array of clothes.

Selfridges ad­vertised regularly in the suffragette paper Votes for Women, featured the suffragette purple, white and green in its win­d­ows, and offered many different designs in white with delicate stripes of suffragette colours to wear to demonstrations. Selfridges garments usually chosen by suffragettes were not the rugged brown outdoor coats and skirts, but rather delicate white tea gowns, of a kind normally worn indoors. The white garments emphasised the physical fragility of women. 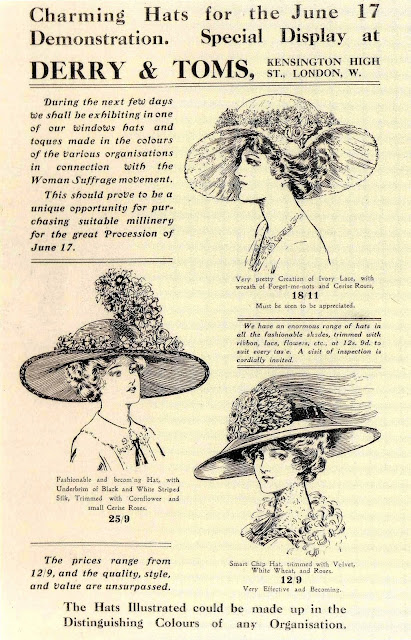 Sally Feldman in The New Humanist wrote that for the Suffragettes, the department stores rep­res­ented both opportunity and limitation. While some more radical women disapproved of the trivial pleasures they offered, they also held meetings in the shops and even used them to distribute their own propaganda. When hordes of militant women rampaged through the West End shattering shop windows in March 1912, it was a manifestation of this ambiv­al­en­ce. The Suffragettes recognised themselves as con­sum­ers and partly accepted retailers' claims that shopping was a female form of eman­ci­p­ation. But now they were demanding more fundamental rights, so they broke retailers' windows to encourage them to become their advocates and vote against the government.
*

Swan and Edgar advertising, suggesting that movement ribbons could be added to their clothes

Thanks for linking my post on Irenebrination. Love your posts, especially those on Orientalist Art. Anna Battista, www.irenebrination.typepad.com

I didn't know that the Suffragettes were so interested in fashion! It's a pity that this is often regarded as frivolous by intellectuals and some feminists.

I loved Selfridges twenty years ago but when I went there in 2007 the loud music drove me away! Management should study Mr.Selfridge's books.

Very interesting article. I suppose the Suffragette movement would have been as wide ranging as any other grouping, and while they might have had one ultimate goal, there were probably a number of other issues that many thought equally important.

A number in the Suffragette movement for example, thought that economic independence from men was far more important than the vote.

However, the phrase 'The Romance of Commerce' will live with me for a long time. What an interesting mixture of words for a book title!

John, I think the advertising people (or their modern wives) were very smart as well.

The "charming hats for the demonstration" were certainly elegant and commercially astute, but radical as well. I cannot imagine modern advertisers drawing the public's attention to a forthcoming street demonstration.

I am writing after reading your great blog entry about Selfridges, Suffragettes and Fashion. (21.4.09) I am a television director, based in Sydney, and we are presently putting together a 2-part documentary about the history of the department store for SBS.

I am wondering if you might be able to help me with a date – I’m looking for the reference of the Christabel Pankhurst quote “Suffragettes must not be dowdy”. Do you have any idea where this comes from or what date she said / wrote this?

Any leads would be appreciated.

Looking forward to hearing from you – my contact details are below.

I've been researching this issue from every angle, from a Canadian standpoint. and as I figure it, the suffragettes learned early that the easiest way to attack a woman, whatever her achievements, is by attacking her looks. It still goes, Oprah, why is she so fat? type thing.
Remember Glora Steinam, the sexy femnist?

I noticed that when British suffragettes came to Montreal the news reports commented on their looks, as is "see, she's actually becoming, not a manly horror. So she can't be all that bad.

LadySuffragette, you were spot on, for the Edwardian period and even now.

That left the suffragettes in a bind. If they ignored the need to look smart, they would play into the hands of their attackers. If they regarded fashion as very important, they would be controlled by the fashion industry, as women always were.

Christabel Pankhurst decided it was better to avoid the usual taunt that suffragettes were simply so unfeminine that they couldn't succeed in marriage and family. But she understood the dilemma.

Hi loved this post and the one called the symbolism of the suffragette. I am currently researching for my dissertation on a similar subject and wondered if you could give me an indication to any source materials used for this. my email is lizabellys@gmail.com

Liz
good luck with your thesis,.. you have chosen a terrific subject.

My main reference, as cited in the post, was Barbara Caine's super research. But for a more comprehensive bibliography, go to http://tinyurl.com/4o6xxdt

The Country Seat blog has a very good post on Selfridge and his architecture. Not just in London but especially in Dorset. See
https://countryhouses.wordpress.com/2013/01/06/harry-gordon-selfridge-and-his-grand-plans-hengistbury-head/

Have you written more on Suffrage?
The photo of the ladies is USA. Front row center is Miss Alice Paul. They are in front of their Suffrage HQ in Washington; National Woman Suffrage Association
And it was thought that Miss Paul did shop at Selfridges when she was in UK

many thanks for the source of that photo... I will add it on. Clearly those women listened to Christabel Pankhurst; they look very smart.

Hi,
You have written a great blog - thanks!
It inspired me to write my Bachelor thesis about suffragettes and fashion. Could you send me a link to your bibliography again, the one you once send to someone else does not work.
Could you also tell me where you found the last two pictures. I would very much like to take them as a starting point for my thesis and need the original source.

Thank you so much already.

I hope your thesis went well and my bibliography helped.

"Shopping, Seduction & Mr Selfridge", written by Lindy Woodhead and published by Random House, appeared early in 2013. Now a television series called "Mr Selfridge" has been produced by ITV Studios! It is set in 1906-7.