The Great Exhibition of London and Augustus Pugin

The Earthly Paradise: Gothic Revival in Architecture and Augustus Welby Pugin has caused a rethink of Pugin's role in the 1851 Great Exhbition

London’s Crystal Palace was built for the Great Exhibition of the Works of Industry of All Nations, 1851. It has been called proto-modern architecture, and was widely imitated in elsewhere. But its design was prob­lematic. Pugin called it a glass-monster, Carlyle a big glass soap bubble and Ruskin a conservatory. Ruskin's label was closest to the truth: the building had been designed by Joseph Paxton, using his experience in building a large green house for the Duke of Devonshire. In this building, cast-iron structure, pre-fabricated units and a glass curtain wall were tested out. 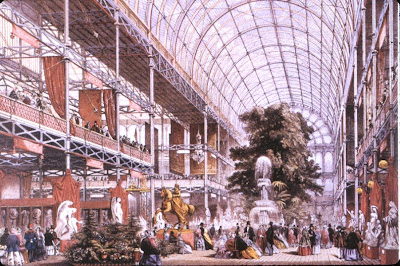 Victorian History blog suggested that modernity was not uniformly present throughout the exhibition architecture. Inside, the wonderful straight lines which captured the eye and drew it onward and upward were compromised by busy, rounded art works totally out of place; not to mention out of time. While the era demonstrated progress in architecture, power and construction in the sciences, the arts languished. Ornamentation was oldfashioned and over the top.

Well, yes! I had always known that medievalist architect Augustus Pugin 1812-52 said to Joseph Paxton, architect of the Crystal Palace “you had better keep to building green-houses, and I will keep to my churches and cath­ed­rals”. So I assumed from that comment that Pugin would have wanted to keep well away from the modernist glass monster.

Yet in 1851, as Margaret showed, Pugin was hard at work on the Medieval Court for the Great Exhibition and many of the objects on display were designed by him. In one way, this makes perfect sense. Pugin was deeply involved in a rel­ig­ious movement that idealised the Middle Ages for its spir­itual awareness – he loved the gothic aesthetic and he loved the medieval morality. Pugin created a series of detailed drawings that gave details of medieval Gothic architecture and decoration. Spec­im­ens of Gothic Architecture and Examples of Gothic Architecture, both published in the 1820s, helped contemporaries architects and designers recreate the Gothic style anew.

Let us ask two questions. Why was Pugin allowed to construct a medieval court, “with wild Gothic longings for pre-Reformation Cath­olicism and trappings, all made in Birmingham” (New Statesman Dec 1999). Many Anglican critics must have half feared a new Catholic resurgence in England. Secondly why did Pugin agree to work in a setting (Crystal Palace) that must have felt repug­nant to him? He certainly prepared his Medieval Court with his normal att­ention to detail and in the end, his court even won the 1851 Great Exhibition Prize Medal! But a medieval court hardly fitted in with the pro-science, pro-industry and modernist architectural attitudes of the Great Exhibition.

Despite all fears, the exhibition eventually made a large surplus. All profits went on to fund an education trust with grants given out for industrial research, in particular the Victoria and Albert Museum, the Science Museum and the Natural History Museum. 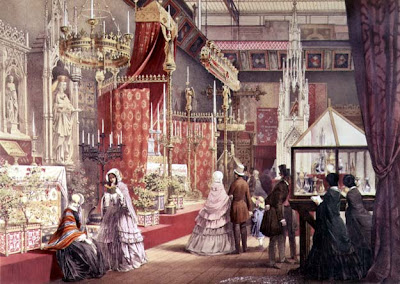 Alas for Pugin, he had thrown himself heart and soul into his career for too long. Soon after the 1851 Exhibition at Crystal Palace, Pugin collapsed from exhaustion and died.

Crystal Palace moved from Hyde Park (built 1851) to Sydenham (1853-4). The new Crystal Palace Company re-erected its identical, standardised cast-iron sections and created the surrounding gardens. The second version was more expensive than the first because it had five rather than three floors and it had elaborate gardens with terracing and fountains. Pugin's original Medieval Court was now joined by Egyptian, Greek, Roman, Moorish, Renaissance, Indian, Chinese and other courts.

In Nov 1936, the second Crystal Palace was razed to the ground in a horrible fire. The cause of the fire was never established, so everyone rushed to their own judgement: the fire brigade was not called until it was too late; the internal wiring was defective; previous repairs were cheaply done, to encourage auctioning off the Palace; the neighbouring community resented the crowds and endless costs etc etc.
Modern visitors can go to  Crystal Palace Museum which has collected all the photos, documents and artefacts that survived the fire. The museum is appropriately housed in a building actually constructed by the Crystal Palace Co.

Thanks for the kind words on the Victorian History blog. I think your question ["Why did an exhibition promoting industrial progress encourage/tolerate a medieval court?"] is interesting.

The short answer is that the Victorians were fascinated by the medieval period. Consider for example the Neo-Gothic architecture (ie. St Pancras Station and Hotel). But there is more to it than that. However, I'll leave that for another time and will do a blog on it in the future.

In the meantime, thanks again for your comment and I hope to hear from you whenever anything on the blog attracts your interest or, for that matter, anythng in Victorian history.

Crystal Palace moved from Hyde Park (built 1851) to Sydenham (1853-4). The new Crystal Palace Company employed 7,000 men to re-erect its identical, standardised cast-iron sections and to create the surrounding gardens. The second version was more expensive than the first because it had five rather than three floors and it had elaborate gardens with terracing and fountains. Pugin's original Medieval Court was now joined by Egyptian, Greek, Roman, Moorish, Renaissance, Indian, Chinese and other courts, full of plaster casts of sculpture collected round the world by Owen Jones.

thank you very much. I added your information to my post straight away.

But WHY did the Crystal Palace Co re-erect and expand a perfectly good building, at huge expense? Surely Londoners could have enjoyed the entertainment, rallies, concerts etc in the first Crystal Palace.

With such enormous crowds, the Great Exhibition might have ended up in chaos. But a new blog post explained:

Instructions were provided for the 6 million visitors to follow as much as possible the course of the sun ie to go from the left towards the right in the passage and courts. Plus people were not allowed to bring dogs, sticks or umbrellas, and if someone lost something, a lost and found was established at the Police Office at the Prince’s Gate. Additionally, no visitor could on no account whatever … touch any article on exhibit. https://www.geriwalton.com/the-great-exhibition-of-works-of/

thank you for the reference to your architectural blogs. Some of your posts are very interesting.