Tintoretto, but not at face value

I don't mind a rollicking good historical novel, as long as the author and the publishing house remember that the story was merely the product of someone's fertile imagination. The Da Vinci Code by Dan Brown was a fun read on the beach one summer, but it was not a reliable reference on the Knights Templar, the Cathars, the marriage of Jesus or secret Vatican conspiracies to silence the Church's enemies.

The intelligent reader needs to do his/her own research on any historical issue. If that is not a realistic possibility, then he/she needs to read quality analyses done by academic experts in the field.

This is equally true in art history. There is nothing more exciting than good quality research done on a piece of art, pulling apart the "truths" that people have always "known" and revealing a new truth underneath. This historical detective work is sometimes accidental but always thrilling, as seen in Thomas Hoving's King of the Confessors 1981. Here Hoving painstakingly chased and analysed every reference ever made to the medieval Bury St Edmund Cross.

This week, my great friend Will Roberts in Boston sent me the story of an amazing piece of detective work in Boston. Even if you don't love the painting, you will love the process.

Even scholars of the Renaissance painter Jacopo Tintoretto have been dismissive of his enormous Nativity, which presides over the Koch Gallery at the Museum of Fine Arts. They have viewed it as awkward, or, if they're being generous, enigmatic or complex. 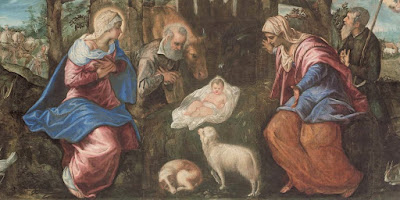 But it turns out that the painting was a lot more complex than anyone guessed. In the process of restoring it for an upcoming exhibition, the MFA made a surprising discovery. In the Renaissance equivalent of a cut-and-paste job, it appears that Tintoretto changed his mind about the subject, cut the original canvas to rearrange the pieces he didn't like, then some two decades later painted over parts of the result to come up with an entirely new composition. The painting that is now a horizontal nativity was once a vertical crucifixion.

Frederick Ilchman, a specialist in the Italian Renaissance, said "It's not uncommon to X-ray a painting and find a completely differ­ent subject underneath. But cannibalising your own picture is a very rare thing in European art." Ilchman and others say that what they once deemed a second-rate painting is now looking a lot better in a new light. Even an untrained eye can see there is something seriously amiss about the nearly 12’ wide painting, which was created c1580. Densely composed and boldly coloured, the work has large, muscular figures in the foreground, iconic religious imagery in the background and a diverse menagerie of animals. One principal figure, St Anne, a lavishly garbed woman presumed to be Mary's mother, is gazing in the direction of the serene baby, but she seems to look right past him to focus on a lamb, and she's flinging her arms out in dismay. A bearded shepherd behind her ignores the baby altogether and is staring at some fixed point in the sky. The crouching Virgin Mary, a luminous figure in a bright blue cloak, is out of scale for the painting.

Neither Ilchman nor MFA paintings conservator Rhona MacBeth expected to find anything so dramatic a few months ago when six men hauled the hefty painting into the MFA's lead-lined X-ray room to scan it for routine restoration and technical analysis. While they could see that the painting was composed of five canvases stitched together, it became clear with the first X-rays that the two outer sections, in­cl­uding a shepherd and Magi, had been painted in a different hand, possibly by workshop assistants. Then they noticed something peculiar in the layers of paint under the nativity scene. Beneath the elderly shepherd was a younger, beardless man, perhaps a saint. And hovering near his head was the bottom of an angel.

And they noticed a pair of legs above the Virgin's head and something that appeared to be a vertical piece of wood. It was a crucifixion. It was clearly taken from another painting, from what appeared to be quite a finished painting.

The final piece of the puzzle fell into place by manipulating digital images of the X-rays. MacBeth lifted out the middle section of the top painting, the compressed nativity scene, and pushed the remaining four panels together to create a different, self-contained tableau. Now the central figure was Christ’s legs, apparently nailed to a cross. Why did Tintoretto alter his painting so radically? Ilchman has no shortage of theories. Perhaps his client abandoned the comm­is­sion or refused to pay for it. Maybe the painting was finished but got damaged. Or maybe he wasn't satisfied with it but saw an opp­ort­unity later to make money by reconfiguring it, "hoping that a few existing figures could hold together a new picture which con­tained lots of additions by workshop assistants."

Where is the missing upper part of the original painting? Ilchman noted "This is a great mystery. But given Tintoretto's thrifty nature, I like to think that he didn't waste any canvas, and it's underneath some other painting, perhaps in a church in Venice." Happily for us, the Tintoretto discovery has inspired the org­an­isers to create a separate room dedicated to the technical examinat­ion of the paintings, including the Nativity X-rays that show the change of plans.

Dear Helen, thank you for your comments advising readers to seek reliable scholarly sources when seeking information about the medieval Cathar movement. It would certainly make my job much easier. Best wishes for 2009 and thank you for your time!