Claude Monet (1840-1926) was born in Paris but his family soon moved to Le Havre where he grew up. In 1859–60 the teenager returned to Paris he was impressed by the Barbizon-school artists like Charles Daubigny. I do not suppose his parents wanted to him to throw his life away on painting, but if he HAD to paint, then at least he could enrol in the École des Beaux-Arts. They were not at all happy when he frequented the haunts of older artists instead, and worked at the Académie Suisse. Monet met Camille Pissarro at the Academie and began a long collaboration with him.

Then, in 1861, Claude Monet was called up for national service. At the time France had a ballot system which determined who was called up for seven years of military service and who was exempt. Monet’s father could have bought Claude’s way out of the army, but chose not to.

Of all the places Claude Monet could have done his soldiering, he seemed particularly attracted to the French Algerian regiment, the Chasseurs d’Afrique. They were a light cavalry corps in the French Army of Africa, first raised in the 1830s. I presume that since Algeria was no longer under the Ottoman Empire and was being invaded by Barbary pirates, France felt they should move militarily into the power vacuum.

In any case, Monet already admired those French artists who had trav­elled to create Orientalist subject matter. He mentioned Eugène Dela­croix in particular, the artist whose colours had been influenced by a visit to Morocco in 1832. Perhaps he hoped a posting to Algeria (near enough to Morocco) would enable him to study the special light, exotic subject matter and heightened colour that could never be found in France. 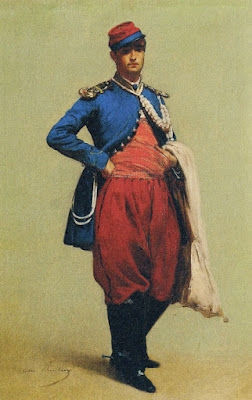 Monet was shipped off to Algiers in June 1861 where he went through military training and work with horses. It might have been boring and sweaty, but at least he found time to practise art. Monet later said that drawing was one of his principal occupations during his periods of freedom. He distracted his companions in the garrison by making caricatures of their seniors and of his friends. He sent back a succession of minutely executed drawings which represented picturesque little scenes of Algeria [depicting]… fauna and flora, various landscapes, countryside views, inhabitants, riders, camel-drivers, veiled women and young girls, buildings and mosques, scenes of the market and everyday life." But where are those Algerian studies now?

Monet said that despite the tedium of military life, he was happy in Algeria and made the most of his time there. "Algeria was a splendid country with constant sunshine, with hot, seductive colours, an eternally blue sky accentuated by the greens of palms and exotic plants. I incessantly saw something new: in my moments of leisure I attempted to render what I saw. You cannot imagine to what extent I increased my knowledge, and how much my vision gained thereby. I did not quite realise it as first. The impressions of light and colour that I received there were not to classify themselves until later; but they contained the germ of my future researches". 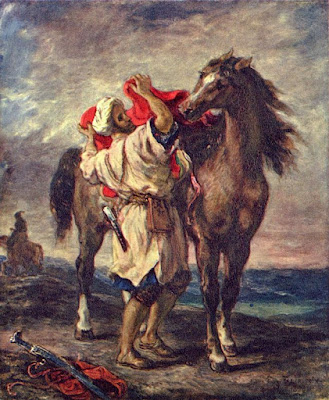 Eugène Delacroix, 1855
A Moroccan Saddling His Horse,
Hermitage Museum
Had Monet seen the Delacroix paintings, just before he selected the Chasseurs d’Afrique?

Claude Monet left Algeria just a year later in 1862 when he contracted typhoid fever. Normally a young soldier would have expected to remain in the army for seven years, so who would pay the army back in Monet's case? Fortunately the artist’s aunt, Madame Lecadre, saved his hide and bought her nephew out of the army. She asked for only one thing: that Monet should return to Paris in order to complete a formal art course at l’Ecole des Artistes. Monet spent 6 months of convales­cence and reacquainting himself with the Paris art scene, then went to study, practise and succeed in his chosen profession. Thank you aunty Marie Jeanne!

It has been argued that without the time spent under the intense North African light, colour and exotic culture in Algeria, Soldier Claude Monet would never have gone on to become a famous Impress­ionist. I am not sure that is true. In 1857/58, years before going to Algeria, Eugene Boudin had mentored the young Claude Monet. And within a year or two Monet had also fallen in love with the art of Camille Corot, Eugène Delacroix and Charles Daubigny.

So I would suggest that Northern France created his Impressionist passion, not Northern Africa. Even in 1862, after Monet had returned to France, he hurried as quickly as he could to Le Havre, once again to paint the sea with his old mentor Eugene Boudin. If Monet had a second mentor of importance, it was Johan Jongkind, the Dutch marine landscape artist who had moved to France. Monet described the Dutchman as a quiet man with such a talent that is beyond words: "by there completing the teaching which I had received from Boudin, Jongkind was from this moment my true Master, and it is to him that I owe the final education of my eye". 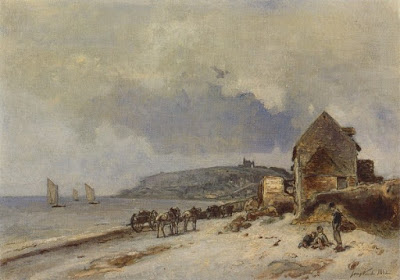 Johan Jongkind
The Beach at Sainte-Adresse
1862, 33 x 46 cm
Ivo Bouwman Gallery, The Hague
Note that Monet spent part of 1867 at the resort town of Sainte-Adresse near Le Havre.

Seven years is an absurdly long time for national service. As usual, the richer members of society can pay to sort things out.

When we looked at Monet's early career in class, I loved the Boudin paintings. But I cannot remember Jongkind at all.

Hello Hels, It is interesting how people always want to find single sources of inspiration for an artist as complex as Monet (or any person, for that matter). Too bad those Algerian studies are lost; they might hold the key to this early stage of his talent. But Orientalism had been influential in France for a long time on many levels, including art, literature and music, so we are still left to puzzle out cause and effect.
--Jim

I find the whole story abhorrent. For a number of reasons.

1. Clearly nations need their young men to do community service for next-to-no pay. But why only use them as killing machines. Why not let them work off their two years in hospitals, refugee camps, elderly citizens homes etc?
2. Why 7 long years? If a boy went in at 18 and finished at 25, he largely missed out on the best years of finding a career, finding a wife etc.
4. A ballot system for conscription is totally immoral. In France in 1861 and in Australia regarding the Vietnam War :(
5. Paying to get out of conscription is even more immoral. Of course the rich wanted to get their sons out.

I went through my old notes on the early years of Monet's career and found plenty on Boudin but *cough* barely a word on Johan Jongkind. If I can find a Jongkind landscape or seascape from c1862, I will add it to the post.

you make two important points. Firstly it is awful that all of Monet's Algerian studies were lost; they would certainly have provided critical information about the early stage of his career. He wrote journals when he was a much older man, but as far as I can tell, his original works will never be found.

Secondly Orientalism was hugely popular. I loved the genre and wrote about it many times eg http://melbourneblogger.blogspot.com.au/2014/02/19th-century-orientalist-paintings.html My issue with _this_ post is that I had never identified Monet as involved (even vaguely) in Orientalist art.

Beautiful images. It's too bad that his studies are no longer available.

Monet: Nature Into Art (by John House) said Monet created a lot of sketches, drawings and watercolour images during his time in Algeria but not oils. Nonetheless there is no record of where the works went or if they were all destroyed. Very strange.

obviously it was that spectacular uniform which drew him to the Algerian regiment.
Moroccan style a big influence on Yves St.Laurent designs and colours too.

agreed.... that uniform is handsome, colourful and strange. It feels as if Charles Lhuillier put the young soldier in a French army uniform then added North African elements to make it appropriate for Monet's placement.

Personally speaking, I fell in love with Orientalist designs and colours in Europe, straight after the Ballets Russes shocked and delighted Paris just before WW1. Later designers were very smart to get on board.

oh the ballet - I just cry and cry. my Russian friend last saw ballet in Moscow 78 years ago and is being taken to Swan Lake next weekend. that's making me cry too. Her aristocrat mother was schooled at the Mariinsky which now houses the ballet. When their estate was smashed up by idiot peasants not realising they were also destroying their own livelihood, this woman posed as a boy servant in the army which of course resulted in marriage to an officer 25 years older. My friend's life is a movie, yet she lives alone, the only permanent resident in a street of holiday houses. all so very Anita Brookner.
Paris was full of refugee aristocrats who fled Bolshevism and had to earn a living when sewing was all they knew. Chanel could not have done it without them. Check the Russian cemetery in Paris for the superb tomb of Nureyev mosaic-carpeted a la his native Tjakistan.
Yes, later designers like Celia Birtwell incorporated Bakst-y elements very successfully.
Great post, keep 'em coming.

Thank you... that means a great deal. I was born into a Russian family and, quite separately, learned ballet with the Boronvansky Company in Melbourne for years. But the unique importance of Ballets Russes costumes, sets and art didn't occur to me until decades later in the fine arts department at university.

wow all the information is so good..nice blog..
Restaurant in Rajendra Nagar

many thanks. Are you a Monet fan?

Okay...that is a great article and fabulous..
Agra Red Sandstone

Thank you. if you are interested in reading further, I would recommend the Unknown Monet Exhibition catalogue: http://painting.about.com/od/productreviews/gr/Unknown_Monet.htm

Monet's views are on show in National Gallery exhibition, examining the French artist’s relationship with architecture. Open until 29th July 2018.

In the catalogue, Richard Thomson considers Claude Monet’s paintings of buildings in their environment, offering a reappraisal of an artist more often associated with landscapes, seascapes and gardens. Buildings fulfilled various roles in Monet’s canvases; some are chiefly compositional devices while others throw into sharp contrast the forms of man-made construction against the irregularity of nature, or suggest the absent presence of humans.

Thank you. Although I am very familiar with many of Monet's works, I have never thought of him having a relationship with architecture.

The library at CAE Melbourne will want to have a copy of the catalogue.