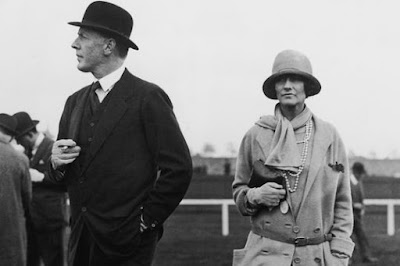 Duke of Westminster and Coco Chanel, 1924
I have been very interested in Coco Chanel’s unlikely path in this world, from neglected orphan to world famous designer. Now Anne De Courcy’s newest book Chanel's Riviera has focused on how the designer helped magnetise the Mediterranean playground from Monaco to St Tropez. Chanel’s lover since 1923, Bendor Duke of Westminster bought her a plot of land in Cap-Martin, after spot­ting it while yachting together around the Riviera.
I already knew that Coco needed someone with extensive experience in commerce, international business connections, and access to large amounts of capital to successfully market her perfume. In 1924, brothers Pierre & Paul Wertheimer became Chanel's partners in her perfume business. During their par­tnership, the Wertheimers saved Chanel by buying 70% of her perfume company. But due to Chanel’s absorbed anti-Semitism, the partnership was doomed.

Chanel purchased five acres of holiday estate in 1928. For the rest of the decade, she oversaw the building and design of the home, Roque­brune Villa in La Pausa. The 1.8 million francs she paid was huge, but to Chanel it was a joy; she filled it with the Duke’s furnish­ings. Chanel's first summer at her villa was amid the glam­our of the pre-war parties and casinos in Antibes, Nice and Cannes. Their love affair ended in 1933, ten years after they met in Monte Carlo, but Chanel kept the elegantly ap­p­ointed villa.
In the charming port towns of Juan-Les-Pins and Antibes, Chanel’s French mariner’s tops and ropes of pearls were the height of chic. But she was also a trendsetter in the garden where she popularised lesser spec­ies like lavender. Although Chanel’s life, specifically her fashion inv­entions and her love affairs, dominated the book, she was not the only icon whose lives were recorded in great detail.

De Courcy began with glamorous descriptions of the summer migration from Paris on the Blue Train. Socialites, artists and writers rented villas and hotel rooms, clearly not an­xious about the economic coll­apse of 1929 and rising Nazism. Evelyn Waugh worked at the Hôtel Wel­come in Villefranche, along with Igor Stravinsky, Serge Diaghilev and Jean Cocteau. Chanel’s great friend Lady Enid Fur­n­ess, an Aust­ral­ian beauty and the third wife of Baron Furness, prow­led with her tame cheetah. American heiress Daisy Fellowes ent­er­tained the Prince of Wales and a divorcée called Wallis. Salvador Dali join­ed Strav­in­s­ky, Cocteau and Pablo Picasso in this villa when they lounged around on handsome pieces of Provençal furn­it­ure chosen by Coco.

In 1938 the Cote d'Azur play­ground was a world of weal­th, luxury and extravag­ance, enjoyed by a bright cast of stars including Jos­eph P Kennedy, Gloria Swanson, Mit­fords, Picasso, Cecil Beaton and Somers­et Maugham. Colette was in a 4-room peasant home in nearby St Tropez and Edith Wharton in a convent in Hyères. PG Wode­house gam­bled at the Cannes Casino while Aldous Huxley enjoyed his villa in Sanary-sur-Mer.
Roque­brune Villa on the French Riviera 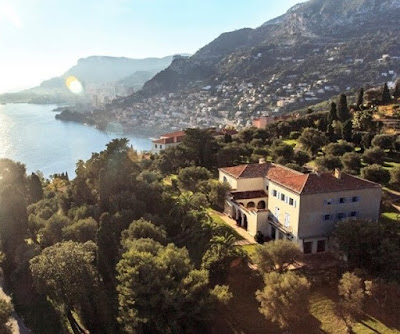 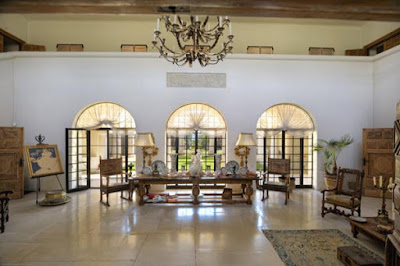 Roque­brune Villa in La Pausa, living room
Did those who settled there think about what was going on in the rest of Europe? Possibly not. It was a glamor­ous life, far rem­ov­ed from conflict. The elite flocked to the Riviera each year to swim, gamble and es­cape from Europe’s turbulence - even when the glamour on the Riviera gave way to oncoming war. They continued to party as the Nuremberg Laws were instated in 1935 and the influx of German Jewish refugees grew. The only person warn­ing fellow partygoers about the inevitab­ility of war against Fascism was Winston Churchill, a guest at the Château de l’Horizon.

Chanel had nothing to worry about. After the Nazis took over Paris in 1940, Chanel moved in with Baron Hans Günther von Dincklage, an Abwehr/German military intelligence officer. They lived in Paris' Hôtel Ritz, then Germany’s headquart­ers, and in high society in La Pausa.

Not everyone agreed with her. In waiting for the Germans to invade Britain in 1941, Chanel’s close friends Misia and Josep Maria Sert took opposite sides. Misia, a Russian-Polish pianist who hosted an artistic salon in Paris, rejected intimacy with the German over­lords. But her husband, from neutral Spain, used his German con­tacts to live in Occupied France in luxury.

The later chapters described the deportations, and the struggle of many along the Côte d’Azur to hide Allied pris­oners and detention-camp-escapees in their villas. De Courcy showed that sympathy was swinging around to the Jews on the Riviera, des­pite the flood of anti-Semitic propa­ganda pumped out by Vichy. Yet the irreconcilability of a] Riviera’s high-society decadence Vs b] the gruesome atrocities of the war… was diff­icult for the reader.

Conclusion
Chanel’s beauty and intelligence attracted many men, but it was her great tal­ent, work ethic and taste that made her an icon. Chanel’s Riviera focused on the seduct­ive world of the Cote d’ Azur in an era that saw the deepest extremes of lux­ury and ter­ror, starting in the 30s. When the Nazis swooped down, the glam­our of the pre-war parties and casinos gave way to the horrors of evac­uation and displacement. Stories of tra­gedy, sacrifice and hero­ism emerged from the bitter struggle to survive. Chan­el’s Riviera highlighted many peoples’ ex­per­ien­ces, but it largely focused on Coco Chanel and the art­is­ts, writers and historical fig­ur­es.
Thanks for the great bibliography and index.
Posted by Hels at 5.1.21

If the Duke of Westminster was one of the richest men in the world, why did Coco Chanel leave him after 10 years? And if he had a legal wife, how did Coco inherit his villa in La Pausa?

This 2nd Duke of Westminster had 3 wives before WW2 and a fourth wife after. Plus mistresses between wives and overlapping his married periods. Fortunately he had lots of estates, in various countries, so each wife and mistress would not have known what the others were doing.

My only problem was that the Duke was pro-German, anti-Semitic and a member of the Right Club. But that suited Coco Chanel well. He was very pleased to gift her the land on the French Riviera AND a house in Mayfair.

Hello Hels, I know that Chanel was immensely talented and that her life is filled with name-dropping glamour. Knowing so many high-level people, she still edged toward the wrong side, and so my admiration, even for her fashion sense, is vastly diminished.
--Jim
p.s. I am allergic to perfume and it is one of the banes of my existence, another strike against Chanel!

This reminded me of a satirical radio play I heard on the BBC. A character, presumably based on Coco Chanel, created a new perfume called Compost. It was meant to appeal to the country-loving man! I have always resisted the allure of Chanel, thinking of her a Nazi sympathiser; a pretty large club I suppose!
CLICK HERE for Bazza’s broadly banal Blog ‘To Discover Ice’

Hi Hels, I recently read this, too, a birthday gift. Chanel was never really on my radar much, apart from the perfume department, so I was curious to read about her in the context of her earlier days and I came away with a distinct dislike for the woman, for a whole host of reasons. With our present-day trend for reviewing the legacy of persons of influence from previous generations through the prism of modern-day mores, the brand and cult-of-personality of Chanel is remarkably untarnished. Mention her name or her style today and many will swoon and wax lyrical about her revolutionary genius and whatnot. The enduring power of marketing, I guess.

Coco Chanel had the most miserable, lonely childhood, until the day she walked out of her orphanage at 18. So it is even more impressive that she became immensely talented and that her life was filled with intellectual and cultural glamour. But she didn't edge towards the wrong side... she enthusiastically leapt.

I agree with you that we tend to review the legacy of important people from previous generations through our modern-day mores. After all, we are totally offended by generations who used to support slavery or locked their daughters away if they had sex before marriage. But I don't think Chanel's reputation remained intact because of good marketing. She really was creative and productive in her own area, and changed women's lives.

It was interesting to revisit The Blue Train post.

I know little about the Riviera and I've not really been interested in visiting there but it does look good in the photograph. I'd be interested to know more about the German occupation of the Riviera.

I knew nothing of Chanel's background and had assumed a priviledged. How wrong could I be! Thank you for educating me once again.

The invasion of the South didn't really get going till 1944, so we have to assume that Channel moved in with Baron von Dincklage in Paris much earlier to avoid any tragedy (for her) yet to come. It was a very good decision for her, and for the Germans who used Chanel in their own missions. But also examine the connection between Channel and Churchill.

I knew a great deal about her years in Paris, before during and after the war, but nothing about her time next to the Mediterranean. Reading and writing blogs is a total learning experience for all of us.

No advertising please. Would you like some Coco Channel references?

hello Hels , Interesting subject. I have read this book and found it very interesting too. Chanel had a pretty sad life .Lived on the surface with little trust for others to the extent that she lied comprehensively about her origins and her life . All the men she ever loved rejected her as mistress material rather than wife material and she therefore never had children . The Duke of Westminster married a younger woman to try and have an heir as by this stage Chanel was in her 40s and probably not able to have children anymore .
Basically I think That Chanel was probably a very isolated person in that she couldn't actually ever be real with any of the people who she mixed with because she knew that they would judge her . Little wonder that such an emotionally closed down person could take up with Von Dinklage . He seems to have been on the scale of things a fairly inoffensive playboy dilettante who actually had been married to a Jewish woman before the war .He also was an intellectual lightweight who sniffed the wind and joined the side he thought would make his life the most comfortable.