Forbidden City is an imperial palace complex at the heart of Beij­ing. Commissioned in 1406 by the Ming Emperor Yongle, the const­ruc­t­ion of the Forbidden City required endless thousands of labourers and craftspeople. Pre­c­ious timber was floated from the jungles of southwest China to the capital, while blocks of quarried stone were hauled to the palace in winter over ice roads. 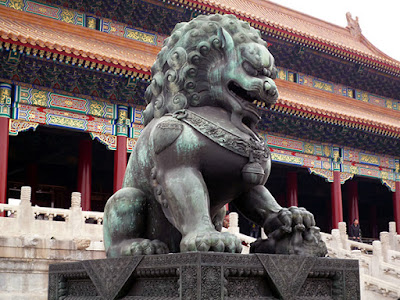 The complex was occupied by the court in 1420, gov­ern­ed by an endless code of rules. 24 emperors of the Ming (1368-1644) and Qing (1644-1912) dynasties gov­erned China from its closed-off world, until revol­ut­ion swept them away after WW1. Despite their apparent age, most of the buildings were actually post-C18th Qing creations.

The walled complex followed the traditional Chinese practice of feng shui. Within the compound, which was laid out on a N-S line, the most important buildings faced south to hon­our the Sun. The great power of the emperor could be judged from the height, width, rooves and the figur­ines on the roof ridges. The most notable landmarks were:

1] The Meridian Gate was the imposing formal southern entrance to Forbid­den City. Its aux­il­iary wings along the entry way were out­stretched like a guardian lion, a massive U-shaped portal at the south end of the complex, once reserved for the emperor alone. The gate was very tall (38 ms) and served as a backdrop for imp­erial appear­ances and proc­lamations. Beyond the Meridian Gate lay a large courtyard through which the Golden River ran in a Tartar bow-shaped arc. The river was crossed by five parallel white marble bridges. 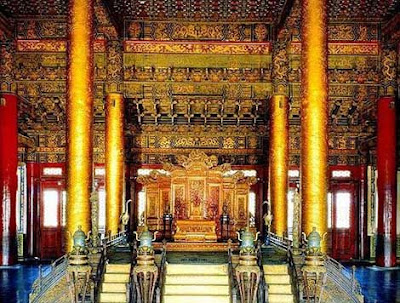 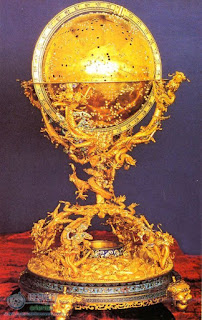 2] The magnificent Hall of Supreme Harmony was the most important structure in the Forbidden City, and the tallest building. It was used for state occas­ions like coronations and the nominat­ion of military lead­ers. It was here that the Dragon Throne of the Emperor stood, the courtyard holding an imperial audience of 100,000. The entire court had to touch the floor nine times with their fore­heads, kowtowing in the emperor’s presence. Behind the throne was a carved Buddhist paradise, signif­ying the throne’s supremacy. Pass via the huge courtyard to visit the Hall of Martial Valour, where emperors received their ministers.

3] The third structure was the Hall of Preserving Harmony, used for banquets and for imperial examinations. The hall has no support pillars, and to its rear is a 250-tonne marble imperial carriageway carved with dragons and clouds.

The peripheral build­ings surrounding the Three Great Halls were used for storing gold, silver, silks, carpets etc, and now house museum exhibits. At the northern end of the City was the Imperial Gar­den, a class­ical 3 acres Chinese garden with fine landscaping, rockeries, walk­ways, pavilions and ancient cypresses. At its centre was a Daoist temple where the emperor retreated for contemplation.

The shape of the 3 Great Halls was echoed by the next group of buildings, reached through the Gate of Heav­enly Purity. The Inner Court was where the Ming and early Qing emp­erors and their courts actually liv­ed & work­ed. The garden was designed as a place of rel­ax­ation for the emperor, with trees, fish ponds, flower beds and sculpture. Then the Outer Court was where the three main adminis­t­rat­ion halls stood atop a three-tiered marble terrace overlooking a huge plaza. The area covered 7 acres, enough space to admit tens of thousands of subjects to pay the emperor homage. 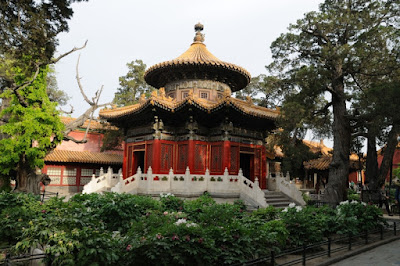 The Palace of Earthly Tranquility was the imperial couple’s bridal chamb­er and the centre of operations for the harem. In time the empresses and concubines of deceased emperors resided there. Today it houses the Sculp­ture Gallery: Buddhist statues, terracotta warr­iors and stone reliefs.

The Palace of Long­evity was built c1771 for Qing emperor Qianlong's retirement. On one side is the Garden of Comp­as­sion and Tranquility, where empress dowagers and imperial consorts wor­sh­ip­ped the Buddha, entertained themselves and rested. Today it holds the Treasure Gallery, the palace's major collection of ornamental objects: gold, silver, jade, pearls, emeralds and semi-precious stones.

From there work go north, exploring various halls and court yards before exiting at the northern end of the Forbidden City. En route, seek out the Pavilion of Cheerful Melodies, a three-storey wooden opera house, which was the palace’s largest theatre.

To prevent ordinary mortals from entering the Imperial City, anoth­er set of huge walls were built, cut through with 4 heavily guard­ed gates. Gongs and bells sounded imperial movements: the military used the west gate, civilians the east gate and servants the north gate. The emperor also reviewed his armies from the Mer­id­ian Gate, passed judgement on prisoners, announced the new year’s calendar and had troublesome ministers flogged. 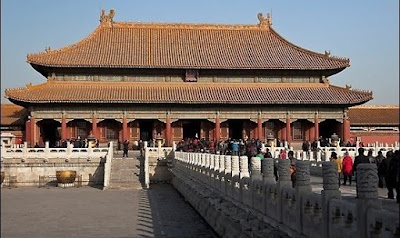 The Forbidden City ceased to be the seat of Qing Manchu imperial government with the Chinese Revolution of 1911–12. Puyi, the last Qing emperor, was permitted to live there after his ab­dic­ation, but he left Beijing in 1924. The City buildings first opened to the public in 1925, although some of the old buildings were lost in the Revolution and during the Jap­anese War (1937–45).

Modern tourists enter through the Meridian Gate. Since 2018, visitors could climb the Forbidden City's Wall just in­side the Meridian Gate, continue to the Corner Tower, and then into the East Prosperity Gate. This route included the Gallery of Hist­oric Arch­itecture, with exhibition spaces in the Corner Tower and the East Prosperity Gate. The year 2020 was to mark the 600th ann­iv­ersary of the Forbidden City, until coronavirus closed the site. 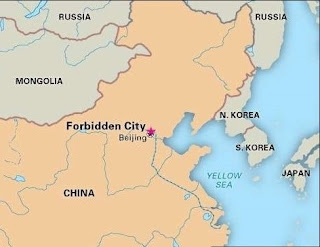 Conclusion
The 178-acre compound, enclosed by 3.5km of citadel walls in Beij­ing, is China’s largest and best-preserved collect­­ion of historical buildings, especially the Three Great Halls at its heart. The Forbidden City was home to 2 dynasties of imper­ial rule, sharing 900-plus buildings with family, courtiers, serv­ants, eunuchs and concub­ines, until the Republic over-threw the last Qing emperor in 1911. It became a UNESCO World Heritage site in 1987, and now welcomes 16 million visitors each year. My son and I spent a full day in Forbidden City, examining the cer­e­m­­on­ial halls, gat­es, courtyards and halls, and cl­imbing along the 10m-high walls for aerial views.

Where my original notes proved to be inadequate, thankfully I could rely on Khan Academy.

I think a lot of mental and physical stamina would be required to spend a day there. I never realised the hugeness of the city.

A good way to get a feeling of what life would have been like in the Forbidden City is to read the novel The Dream of the Red Chamber (Hong Lou Meng) by Cao Xueqin. While the very rich Jia family's compound was not quite as extensive as the imperial one, it had the same division of gardens, gates and often single-use buildings, with new sections always being added, and with lots of servants to keep the works going. The Dream of the Red Chamber, one of the great Chinese novels, is a bit like a giant soap opera, many parts of it R-rated--don't say I didn't warn you!
--Jim

The Palace Museum has more cloisonne ewers with more gold and more jewels than we've seen in galleries elsewhere. Even the clock gallery was impressive.

Andrew it is enormous yet most tourists leave by lunchtime. If you want to stay longer and see more, stop every 2 hours for a cup of tea at one of the kiosks. At lunch time, lie out in one the gardens and eat sandwiches.

Parnassus the very rich Jia family's compound could never have been as extensive and expensive as the imperial one. The emperor only allowed very few selected people into the entire complex, and if he disliked someone in particular, he had them flogged or executed at the Mer­id­ian Gate.

Train Man Thanks. I will try and add a photo from the museum's collectables. They stopped all the viewers in their tracks.

Hi Hels - my goddaughter spent work-placement there fairly recently and explored some of the area, while being able to work and see their culture. It was about 10 weeks ... so she experienced quite a bit and was able to travel a little ... Great Wall, the Forbidden City ... and other areas. When I next spend a little time with her I must ask her again to tell me about it ... different era, and with different insights. Take care - must be an amazing place to spend time in ... all the best Hilary

Hilary Your goddaughter is very fortunate. I was born in Europe and lived there for years, but never visited East Asia. Now my son and I have travelled to China and Japan each year, reading as much as we can before we leave home.

It sounds even more impressive than I had ever imagined! It would require quite a lot of upkeep even now, let alone in the days when it was the Emperor’s residence. Even the food supplies for all the people who lived there would have been massive!

Sue The costs were huge over the centuries. Recently the empress dowager Cixi (died 1908) renovated two Palaces in part of the inner court, changing the original layout of six palace compounds into four and loosening control of the emperor’s authority. And there were new Temples built for the imperial family’s religious functions on both sides of the inner court. These were the last major and expensive constructions in Forbidden City.

Since it opened to the public in the late 1920's, I assume the 16 million visitors each year pay for most of the upkeep.

Thank you for this Dr Joe! China is such an enigma to me. It's hard to know what is real. Ever since I saw The Last Emperor in 1987 I have wondered what life in Imperial China was like. Ancient Chinese history seems to be so much more fascinating than the modern day!
I was interested in whether or not Feng Shui is still practised there. I read about a western man who applied for a job in a Chinese bank. He was asked how he would react if he found that any of his employees were cheating the bank. He said that he would desecrate the graves of their ancestors and was offered the job the next day! (Although he apparently declined it).
CLICK HERE for Bazza’s righteously rebarbative Blog ‘To Discover Ice’

bazza imperial China seemed very enigmatic, because China was inward looking and because Europeans believed non Europeans were inferior. Even when Europeans did travel to China, they only wrote up what they were allowed to see. Not to mention language problems. These days Forbidden City has wonderful explanations in English which I photographed.