I was terrified by the 1970 Kent State Massacre. I was the same age as the victims (20-21), shared the same anti-war politics and studied in the same university faculties. And mostly because my friends and I were going on anti-war demonstrations in Melbourne all through 1969 and 1970.

I have used contemporary newspapers for the 1970 reports (Kent State, Idea Stream and NY Times etc) and David Steigerwald for the 2020 retrospective analysis.

On Friday night 1st May, a ruckus at Kent State in NE Ohio surprised unp­rep­ared Univ­ersity officials. Local leaders insisted that outside agitators and radical elements, long presumed active in the campus area, were to blame. Kent's mayor declared a state of emergency in town and established a curfew. And he appealed to Ohio governor James Rhodes to send in the Ohio National Guard/ONG. Rhodes had depl­oyed the Guard very often in other strikes. NB Gov Rhodes called on J. Edgar Hoover, Federal Bureau of Inves­tigation Director, to look into the campus violence. 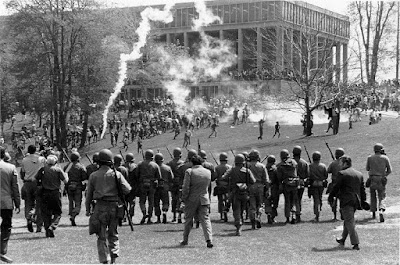 The guardsmen encircle the students and prepare to take aim

The ONG units arrived in Kent late Saturday night as fire gutted the campus ROTC building, a fire set by the students. The Guard moved on campus and pushed students from the central Commons back toward the dorms. The Guard’s commanders Gen Del Corso and Gen Canterbury made clear that they recognised no boundaries between town and campus, nor did they acknowledge university officials.

On Sunday 3rd May, Gov Rhodes stopped at Kent en route home. With Del Corso and other officials there, he delivered an inflam­m­atory speech den­ouncing mysterious out­side agitators who were run­ning between universities, causing destruction. They were “worse than the Brown­shirts and the commun­ists. We are going to eradicate the problem.”

Del Corso believed that Rhodes approved whatever measures were necessary to eradicate the problem, including shooting to kill. Yet he also told University President Robert White not to close the university i.e unof­ficial martial law Vs a campus going about its normal affairs.

In part because of this contradictory situation, Monday 4th May ended in tragedy. Near noon, Canterbury led 100 Guard­smen on to the Commons to disperse 500 students who’d gath­er­ed. The Scranton Report on Campus Unrest found some students came to protest the presence of the Guard. Others were simply curious, or had free time. The Guardsmen were equipped with tear-gas launchers, gas masks and rifles loaded with live ammunit­ion.

The Guard moved toward the students after firing tear-gas volleys. But it was a windy day, and the gas blew with the wind. So the Guard pushed most students up Blanket Hill and down the other side toward a football field. The Guard with gas masks on and loaded rifles ready, marched into the field. Students with their notebooks wandered past peers who were hurling tear-gas can­is­ters back at the Guard. Some chucked rocks; others jeered. Many students described the atmosphere as carnival-like; few imagined that the Guard’s rifles carried live rounds.

After having pushed the students from the Com­m­ons, Gen. Canterbury decided to go back up Blanket Hill and return to the front of campus. As they turned to move, Guardsmen dropped to their knees & aimed their weapons. Canterbury’s men got to their feet and when they reached the top of the hill, they suddenly wheeled around and faced the crowd. 13 seconds later, 30 helmeted National Guard sold­iers fired in unison at the students. Allison Krause 19, Jef­frey Miller 20, Sandra Scheuer 20 and William Schroeder 19 were killed and nine others were injured, Dean Kahler 20 suffering permanent spinal paral­ysis. 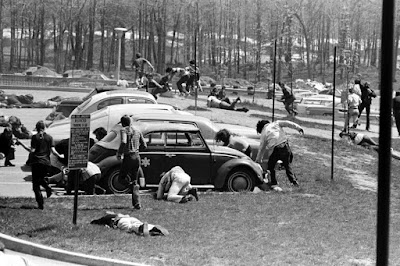 Students run away or hid behind cars

ONG leaders, especially Del Corso and Canter­bury, rushed into self-justific­ation. They stoked rum­ours that the Guardsmen feared for their lives and respond­ed to sniper fire, although the FBI quickly debunked that story. The State’s legal process continued through a manipulated county grand jury, the 1973 federal indict­ments of 8 Guardsmen charged with violating the civil rights of those they shot and its grudging 1979 agree­ment to pay paltry civil dam­ag­es to the victim’s families. Rhodes signed a letter of regret. But no guardsman, no commander, nor the Ohio governor who ordered them to occupy the campus and incited them, was ever brought to justice.

The most serious unresolved questions were whether an order to fire was given and by whom. Some men heard an order; and still others explained that they fired only because others did. If no order was given, then Canterbury and his officers failed to control their men. If the office­rs gave an order, then they were directly respon­s­ible for the killings. While Nixon did not give the order to fire, he helped create the political climate for the violence, degrading antiwar student protesters just before Kent State.

What has been learned since 1970? The massacre at Kent State showed that the U.S. military had launched a shooting war against their own children. It was an event that distilled the age of tumult: young pitted against old; opponents of American policy in Vietnam against the Cold War consensus; or the forces of change against the forces of order.

In May 1970, initially peaceful prot­ests against President Richard Nixon’s announcement about expanding the Vietnam War into neutral Cambodia morphed into state-sponsored killing. Hund­reds of college campuses closed as protests erupted. Young people were testing boundaries, challenging restrictions and engaging in political protest. Even worse, the Kent State killings happened in the very heart of middle America, in “politically and culturally in­ert” Kent State. The count­er­culture, anti-war movement and Black Power had arrived, and America was imploding. 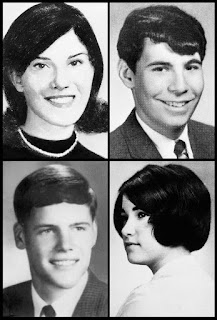 
This month Kent State commemorated 50 years since the massacre with a candlelight vigil and a radio play.

I remember all the anti-war demonstrations back then, but the big fear was not getting a respected job later on. Not being shot by the police.

Hello Hels, The Kent State Tragedy was a pivotal moment in American history. American values were outraged and challenged by the incident. One positive outcome was that many colleges, not wanting another Kent State and also not wanting uncontrolled student protests, started actually listening to the students, and the presidents and administrators interacted with the students to prevent a contest of wills or a repeat incident.

For those studying and documenting the Kent State Massacre, one odd development is that the records of the incident are now in the Beinecke Library at Yale, along with, incredibly enough, the actual guns involved. Apparently the officials in Ohio wanted the materials stored in a more neutral territory.

Kent is very close to Cleveland, so the Incident has always been kept very close to mind. When in the area, we often stop there to stroll around the college town. The main part of the campus, with its trees and lawn, is now a calm oasis, but there is a monument to commemorate the tragedy of Mat 4, 1970.
--Jim

I totally agree. There were all sorts of horrible consequences of going on demonstrations during the Vietnam War, especially if individuals were photographed or arrested by the police. My parents were anti-war, but I still received a letter from a relative saying his job might be in jeopardy if _I_ was seen on tv or in the newspapers. As pathetic as that was, no-one was ever afraid of being shot.

I am delighted that many colleges started actually listening to the students, and that the administrators interacted with them to prevent anything ever like Kent State massacre again. But it wasn't until the end of 1973 that Congress required the President to obtain the support of Congress for sending American troops abroad. So for the next few years, demonstrations continued all over the country, perhaps without the brutality of Kent State.

Men here were chosen for conscription by ballot. I would have been furious, had my birthday been drawn out. No wonder the students at Kent State were mega anxious.

I am so glad you have written about the massacre of sincere young people and keep this story of the criminal acts alive and bubbling along decades later.

sending all boys to a distant war zone was obscene; allowing the wealthy, the lucky, the influential or the crippled to escape conscription was even more unfair.

The coronavirus has stirred up memories of pain and loss all over the world. But until I recently read "May 2020: Kent State after Fifty Years" by David Steigerwald in Origins, I had forgotten just how terrible the 1970 massacre had been.

I was at Melbourne Uni then, and we had a tearful memorial service for the dead students.

It's hard, from this remote time, to fully recall the revulsion felt at reports of guardsmen firing at unarmed students. I was a similar age as you Hels, not at uni but in the workforce. My best mate was at UQ and Queensland was in the gerrymandered grip of Joh Bjelke-Petersen. Demonstrations were not uncommon then, but the police did use truncheons and other physical violence including the choke-hold. Thank goodness there was no involvement of firearms.

Agreed. I thought I would never forget the political horrors of those times, embedded in the heart and mind to the point where peoples' mental health was affected: the massacres of Vietnamese civilians, Kent State, Joh Bjelke-Petersen's freedom from democratic rule and particularly the sacking of the legitimate government by Kerr's Cur. Spouse and I graduated in Dec 1970 and left Australia in disgust Feb 1971.

I would not normally cite military references but note Veterans Today, May 29, 2020. It linked the possibility of Trump creating another mass murder of civilians with Kent State.