Mullumbimby is a small Australian town in northern NSW. A free­wheeling place of yoga and alternative life­styles. Not an easy place to summon the suffering in the songs of the battle fields and the despair of the Russian proletariat!

It all began with singing and drinking at the Returned Sold­iers League on Tuesday nights. The men all lived in relation­ships where they had to co-parent and do half the cooking, so they had to come up with elaborate excuses to leave the house to go out to the pub. A Russian choir was the excuse.

The ABC showed that the idea came from Glenn Wright, a former co-owner and talent booker for Sydney's Har­b­our­side Bras­serie, who moved to Byron Shire and started the Mullum Music Festival.

In his impressive fake Russian accent, choir master of cer­em­on­ies Mark Swivel explained: "Dustyesky* was the leading gen­uine fake Russian choir in southern hemisphere; 28 men, middle-aged, hairy and all living outside the tiny ham­let of Mullumb­imby or, as they called it, Mullumgrad.

Although Comrade Swivel liked to say all the choir members lived in shipping containers and work in a typewriter factory, they were from all walks of life: nut farmers, teachers, plumbers, carpenters, musicians and builders. And all of them sand like they knew the language and the words. The com­rades were not be Russian, but they had the patriotic passion to sing the traditional Russian folk songs. 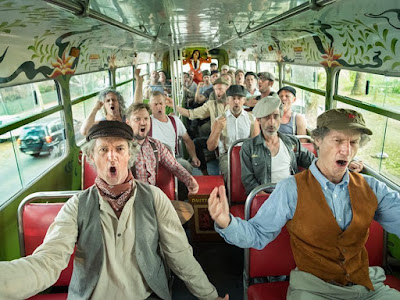 The choir rehearsing en route to the Sydney Festival

People told Mark that Dustyesky had three type of men: 1] with excellent voice; 2] who could sort of hold a tune; and 3] good to drink with. Nonetheless the choir performed Russian Red Army and tradit­ion­al folk songs in perfect 4-part harmonies. When teaching an amazing song to a bunch of people who weren't accomplished singers and were drink­ing beer at the same time, pretty much anything could happen.

Glen Wright had a longstanding love affair with the music of Russia, the great Russian composers and also the march­ing army songs. Glenn wanted a Russian choir for the Mullum Festival but could­ not afford to fly one out, so he had the idea of creating one locally. It was 2 am at a party when they were drinking vodka that Glenn ran into Andrew Swain, a real choir­master.

Singing ability was not a high priority when Andrew put the call out. He didn't do auditions as he believed that everybody could sing. It was about looking the part - hairy, woolly men who were found at the bar late at night.

From their inaugural gig at the Bangalow Hotel in Byron Shire, they knew something special was happening, Mark said in his trademark faux Russian accent. Perhaps it was the toasts with Russian vodka to make the perf­orm­ance more culturally approp­riate or maybe it was Mark saying that “now we look forward to meeting your womens and livestocks after the performance”. Sud­denly they were in demand at fest­ivals at a time when they only had three songs. 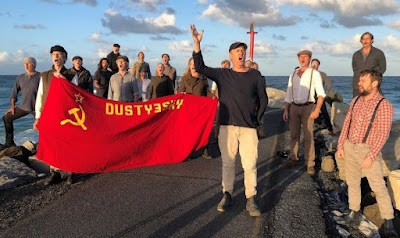 Holding up the red Dustyesky flag in Brunswick Heads

On the ABC, I saw the choir on the surf beach break­water in Brunswick Heads, reverently singing a rousing Russian rev­olutionary song. They were dressed roughly, in cloth caps. There was Russian passion in this song about solidarity, even though none of these comrades had ever been near the Motherland, seen a windswept steppe or crossed a frozen tundra. And none spoke Russian, although they liked vodka.

After an inaugural performance at a Byron Bay pub, Dustyesky were quickly overwhelmed by offers. They sang at huge festivals in Melbourne and Sydney, and at Adelaide's Womadel­aide Festival. It was always easy to spot Russians in the aud­ience because they were the ones cry­ing or singing along to every verse. Even the Rus­s­ian amb­as­sador and his entourage came to see the choir.

The Austral­ians were ter­r­ified when the real Russians started noticing them and Russian journalists came to interview them, ner­v­ous about whether they would like or hate them.

Dustyesky was an Australian choir, entertaining Australian aud­iences. But then the choir accidentally went viral, was picked up by Russian television and became known to millions of Rus­s­ians. Russian television reporters helped the choir to put a clip together, showing the Aussies recording a beautiful yet tragic song about tanks on the battlefield, and a Russian soldier who would not get home to his family.

The Russia Today TV network played the clip at the end of EV­ERY news bulletin. It was possibly the only time the word Mul­l­um­bim­by had ever been heard on Russian tv. Suddenly the phone was re­ceiving mess­ages from Russia in the middle of the night. The choir was a hit (see YOUTUBE), rightly so!

An unexpected call came from the Russian Ministry of Cult­ure inviting the choir to sing in Red Square for the Immortal Reg­im­ent at 9th May Grand Victory Day Parade, in front of a qua­rt­er of a mil­lion people. The Russian Govern­ment were flying 28 men round the world to sing, but COVID-19 stopped the event and Dusty­esky's big trip to the Motherland was cancelled. None­­theless the Russians still broadcast the clip during their Vict­ory Day. Fake Russians, yes, but the choir would have rep­resented the "mass voice of the people"

As Dustyesky's popularity surged, a Russian group sent back a love letter. The Choir of Udmurtia in the Volga responded with a wonderful rendition of Valtzing Matilda.

It had taken a motley choir from Mullumbimby to return ancient folk and classic songs to Rus­sian culture. Dustyesky was proof that the songs of Russia were actually the songs of entire world. That there was no specific cul­ture, there was just the song, and it held all of us within it.

Press on the NSW map to find tiny Mullumbimbi

Thanks for the youtube music, the first time I had heard of Dustyesky.

no wonder your neighbour knew about Dustyesky, long before you did. In June 2017 Byron News wrote about Andrew Swain: "I was contacted by the Russian Cultural Club to do a fund raiser for them, so they did a little article in their newsletter which was lifted by a newspaper in Belarus. That article was picked up by Russian media and the first thing we knew was last week when our Facebook page started getting thousands of likes and comments from Russia. "By Saturday we were doing interviews with TV1 and other Russian television news shows. At rehearsal last Tuesday we did three Skype interviews with Russian TV. Apparently they have gone nuts for Dustyesky over there."

Hello Hels, For a change, this is a humorous and heart-warming story about international relations. One that builds relationships instead of tearing them down. Although I imagine that there exist those with McCarthyist-type attitudes who would rail against this as a foot-in-the-door type of event.
--Jim

When the choir appeared on Russian National Television each night, they had an audience of 250 million people. Not even the Beatles could achieve that.

In the years since 2014, I think that the lads from Mullumbimby were thinking more of having fun, drinking alcohol, enjoying comedy and going to lots of music festivals.

Improving international relations only became visible when the Russians felt a huge pride at their culture being celebrated, especially at a time when Russia was not getting such a great press elsewhere. And I am personally delighted :)

Those are the Russian figures for the news on their Channel One, and I am sure they are accurate. What was surprising to me was that the Australian choir played on the Russian News broadcasts and not, for example, on Russia Has Talent. Beatles, eat your hearts out!

H Hels - I hadn't picked this up anywhere ... so what a fun find - and amazing set of co-incidences set off by sheer bravado and a love of music and drink ... what great fun - loved - it - thanks ... take care - Hilary

It WAS a fun find :) But sometimes great connections are made by accident, and even if the rural lads' Russian accents were a bit questionable, the excitement on both sides was palpable. I am biased of course since my family was Russian but had the Russians not responded so warmly in 2017, the choir's impact would have been limited to rural music festivals and pub nights.

I look forward to your views.

What a great story. No doubt due to the way they dress, they even look Russian. What a pity they weren't able to go to Moscow.

I wondered for years why my beloved was my also my blogging partner, and decided it was largely for reading all the medical etc journals and summarising suitable articles. But this time he outshone himself. He taped Australian Story from the ABC, bought almond croissants and prepared espresso coffees.