Charles Kray and Violet Lee married in 1926 in East London, and had 3 surviving children, Charlie (b1926) and ident­ical twins Ronald and Reginald (b1933). They moved to Bethnal Green in 1939, where Charles hid from war service and maternal grandfather Jimmy Lee was a bare-knuckle box­er. Grandpa encouraged the lads to take boxing, then a popular East End pastime.

The Krays were called up to National Army Service in Mar 1952. When the corp­or­al in charge stopped the twins leaving the barr­acks, he was ser­iously injured by Ron­nie. The Krays walked to their East End home, were arrest­ed for assaulting a police officer, serv­ed a month in Wormwood Scrubs and were dishonour­ably discharged from the army.

Their home life was grim, yet they created an attractive image for them­sel­ves. Ronnie adapted the US gangster image to Brit­ain, dressing in suits with slicked-back hair. They bought a decr­epit snooker club in Mile End where they firebombed other clubs and ran protection rackets. 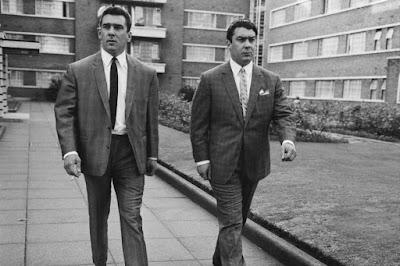 During the WW2 Blitz, and after, the Spirit of the Blitz survived. That meant that the people of the East End would survive, still running their own lives, working tog­ether and never dobbing in local hoodlums to authorities. Meanwhile the Krays were widely seen as charming West End nightclub own­ers, part of the Swinging London scene. On the celeb­rity circuit they soc­ialised with lords, MPs, socialites and show business char­act­ers. They had the manners of gentlemen; they were good to their mum and loved their dogs. A force to be trusted in chaotic times, unlike the new thugs and foreigners, older Londoners said. So al­though their glamour was a mere cover, the twins represented some­thing lost for East Enders.

Luckily for the Krays, who were inv­olved in hijacking, armed rob­bery and arson in the late 1950s, the Blitz Spirit survived.

But I still don’t understand the concept of Gangster Glam­our. With armed robbery, protection rackets, hijackings, arson and mur­der, why has history suggested that the twins ruled the East End with a mix of violence and charisma? And why did the twins receive Funerals Fit For Heroes???

In Wandsworth in 1960, Reggie met Frank Mad Axeman Mitchell and Jack The Hat McVitie (see below). With their gang, The Firm, they plotted against their main South London riv­als, the Rich­ardsons.

The twins moved into classy territory in the West End, acqu­ir­ing the Knightsbridge gaming club Esmeral­da’s Barn. The club stayed open un­til 1963 and was patronised by famous film stars.

In July 1964 the Sunday Mirror showed that Ronnie enjoyed an ill­egal gay relation­ship with Cons­ervative pol­it­ician and aristocrat Lord Boothby. The newspaper backed down from this scandal, sacking the editor, apologised and paid Boothby a huge settlement.

Actually there was a problem for both main political parties. The Con­servative Party was unwilling to ask the police to end Kray pow­er, for fear that the Lord Boothby connect­ion would re-emerge. And the Labour Party, in power from Oct 1964 with a tiny majority in the House of Comm­ons, feared an imminent General Elect­ion. And don’t forget the Profumo Affair, 1964!

In 1965 the twins were arrested for de­m­and­ing money with menaces from The Hide­away club-owner, but were released af­t­­er Lord Boothby again questioned their det­ent­ion in the House of Lords. Protection reach­ed far up British society! 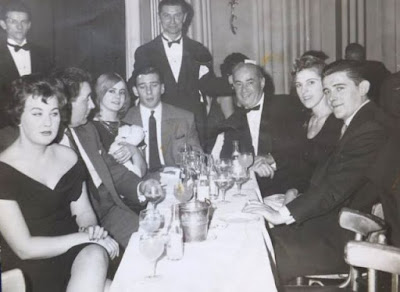 
If the twins mixed with show business celebrities and politicians, why commission murders? Ronnie paid Jack The Hat Mc­Vitie in advance to kill friend-business partner Leslie Pay­ne. The murder failed, but then in 1966 there had been a public shoot-out in White­chapel, involving the rival Rich­ardson gang. This led to the arrest of nearly all the Richardson gang. Ronnie was in a pub when he learned of rival George Cor­n­ell's whereabouts in The Blind Beg­gar, White­­chapel. With his driv­er Scotch Jack John Dick­son and his assistant Ian Barrie, Ronnie entered the pub, walked to Cornell and pub­licly shot him in the head. Barrie warned the pub­lic not to men­­tion these events to the police.

In Dec 1966, the Krays helped Frank Axeman Mitchell escape from Dartmoor Prison. Once Mitchell was safely out, the Krays held him at a friend's flat in East Ham. Mitchell's escape and dis­ap­p­ear­ance were murky, but Det Super Leonard Nipper Read of Scotland Yard decided to continue with the case and have a separate trial for Mit­chell, after the twins had been convicted for other crimes.

Reggie was encouraged to kill Jack The Hat McVitie, the unreliable member of the Kray gang, in Oct 1967. McVitie was entic­ed to a Stoke Newington flat for a party where Reg­gie stabbed McVitie in the face and neck with a carving knife. At dawn they dumped the dead body in the English Channel. Then a gun bat­tle with the rival South London Rich­ard­son Gang fol­lowed in 1966. The Krays were arr­ested with 15 gang members in May 1968 by Insp­ec­t­­or Read, thwarted in his earlier pursuit by Lord Boothby’s intervention.

Reggie was seen as brutal but Ronnie was des­c­rib­ed as having many mental conditions and abuse problems. Were those reports accurate? Formal psychiatric reports were prepared by Dr Denis Leigh, Royal Bethlem-and-Maudsley hospital after long inter­views in Dec 1968, to est­ab­lish whether he was fit to stand trial. Ronnie was indeed treated for paranoid schiz­o­phrenia. Allowed to go ahead, the Corn­ell and McVitie trial lasted 39 days, Old Bailey’s longest, most expensive ever. The Krays were found guilty in 1969 and sentenced to life impris­onment.

In 1979 Ronnie was commit­ted as a para­noid schizophrenic in Broad­moor Hospital Berks, dying in 1995. Reggie was locked up in Maid­stone Prison and Wayland Prison Nor­folk, dying in 2000. Black horses pulled their hearses through Bethnal Green’s jam-packed streets. 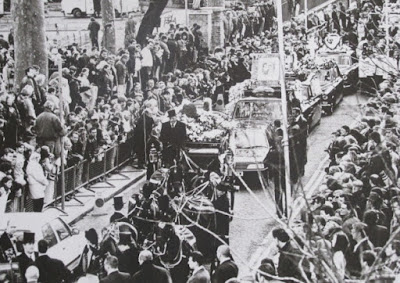 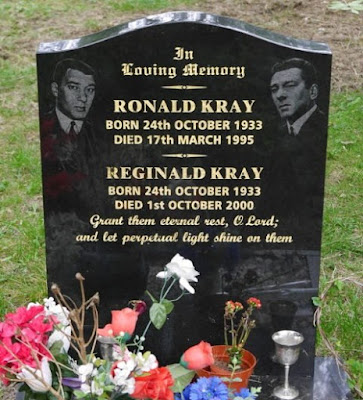 tombstone for the twins
together forever

To this day I am interested in the organ­ised responses of newspap­ers, political parties and the Police to crime. As horrified as I am, the twins’ story has outlived them both, rev­it­alised in a new film Legend (2015). Now read Pop Flock for many other cultural references.

Hello Hels, Why are we always told that vicious thugs were good to their mothers? How does that negate any of their other crimes? Besides, if these mothers were so great, why didn't they influence their children to become upstanding people? I also don't get the romanticizing of outlaws. Even if they are involved in high-level crimes, their ultimate victims are ordinary people who are robbed and bullied.
--Jim

I remember following the story of the Kray twins from about 1960 on, but I really didn't believe that Britain would tolerate guns, police and political involvement in covering up crime, and gangs mooching around London. How naive.

Read's April 2020 obituary said exactly the right thing: he was given the task of investigating the murders of Cornell and of Jack McVitie, having already gained a reputation for being meticulous and, most importantly for this case, incorruptible. Rest in peace, sir.

I do understand the East Enders' sense of being oppressed and to some extent being excluded from The Good Life. And I do appreciate that the Spirit of the Blitz survived into the 1950s and 60s. But vicious thugs were nothing but lying, cheating, blackmailing and murderous thugs. And they had no sense of community welfare either; they served only their own needs at any cost.

Anyone calling themselves Kray id be worried about in 2020 :D.

Post WWII criminals all over the world were protected by corrupt law enforcement and judiciary. The twins were just a bit more 'shiny' than many and they were possibly generous to their fellow East End residents, like our own local John Wren.

Fortunately the twins didn't have any children. But if my name was Kray and I lived in London, I would change my name immediately *nod*.

That said, it seems very unfair to hold the crimes of the fathers over the lives of the children and grandchildren.

thank you. I fear that similar stories happened elsewhere that we don't know about.

a very interesting comparison, thanks. Although our own crime boss John Wren was not a murderer, his organisation employed corrupt lawyers, politicians, officials, gangsters and police to remain safe from intervention.

Note the yearning for respectability and entrepreneurialism on the one hand (Reggie) the enjoyment and celebration of extreme violence and gangsterism on the other (Ronnie). This slots in nicely to a branch of study related to identical twins: their unique relationship. Research into twins is a staple of psychology, criminology and behaviourism. And so the Krays, violent criminals both but one psychopathic, have provided considerable scope for analysis among both expert and amateur pundits.

I am fascinated by the Krays being identical twins. If crime is genetically inherited, identical twins are much more likely to share criminal impulses than fraternal twins or any other brothers. But more than that, identical twins want to make each other happy, so the weaker twin may not have the moral strength to separate himself from the more powerful twin.

I have led my walking group, several times, to Chingford Cemetery, where there is a Kray family section on a corner plot. Just behind the twins tombstone, that you have shown, is that of Violet, Charles and others. People STILL leave fresh flowers on them!
The Monty Python team bravely and precisely satirised The Krays with 'Dinsdale': "He was vicious but fair...yes, he did screw my pelvis to the gate-post but I probably had done something to deserve it..."
CLICK HERE for Bazza’s inordinately impudent Blog ‘To Discover Ice’

when I saw photos of mum Violet's funeral parade (1982), I thought it must have been a coronation, it was so festive and crowded. Ditto when Ronnie's hearse (1995) was honoured by more numbers than we get at a football grand final. If the crowds were celebrating WW2 blitz spirit, and the twins' contribution to East End community safety in the 1950s and 60s, they must have had VERY long and twisted memories.

A fascinating account. I didn't know they were twins.

identical twins, no less. That seemed to be very significant in their relationship and behaviours.

Hi Hels - I have to say I have no wish to know ... and I'd have hated to be brought up in their neighbourhood - I guess you have no choice but to be involved. Appalling people - but they'll be studied by psychiatrists et al ... to see if lessons can be learnt. Not nice at all. All the best - Hilary

If the twins _were_ studied by psychiatrists, I haven't seen
a] much public evidence of their findings in newspapers/radio/tv and
b] clear instructions by psychiatrists to the courts, police, judges, prison systems and funeral companies.

Despite all their armed robbery, protection rackets, hijackings, arson and mur­ders, the twins were rarely gaoled with serious sentences until 1969. Perhaps professionals were too scared to intervene.