In 1870, the vast area called Rupert's Land was transferred from the Hudson's Bay Company and purchased by the new Dominion of Canada. The sudden shift of authority and resultant uncertainty among the inhabitants of the region erupted into the Red River Rebellion of 1869-70. It was essential that order be restored by the newly formed federal government in Ottawa.

In 1872 a colonel in the Canadian Militia was dispatched into the Northwest on a governmental fact-finding journ­ey. He recommended that a regiment of 550 mounted riflemen be organised to preserve order in the terr­it­ory, and to protect the surveyors and railway builders who were working their way to the Pacific coast.

In Ottawa, 1st Prime Minister Sir John Macdonald (1867–73) was soon aware of the viol­ence in the USA’s western plains and did not want these problems repeated in Canada! In May 1873 Macdonald successfully introd­uced a bill to est­ab­lish a police force in the territor­ies: Manitoba, parts of Sask­at­chewan, Alberta and Can­ada’s northern territories, pop­ulated mainly by First Nations and Métis peoples.


In Oct Lieut-Col George French was appointed first Commis­sioner of the North-West Mounted Police. Recruits had to be males under 40, healthy & moral, able to read & write English or French, and ride. Pay was 75c a day for sub-constables and $1 for constables. Many men applied, but those with previous military or police experience were preferred. The first recruits assembled in Toronto and by Aug 1873, 150 were sent to Lower Fort Garry aka Winnipeg to train as a cavalry regiment.

But it was the whiskey trade that demanded immediate action. Macdonald received reports of the devastating effect of the whiskey trade on the Blackfoot, Blood and other First Nations. Traders from Fort Benton Mont­ana (in the USA) had been operating illegal posts eg the notor­ious Fort Whoop-Up in southern Alberta. They were tough lawless men, many of them ex-servicemen from the Am­erican Civil War. In exchange for the Métis’ buffalo hides, they traded weapons and adulterated alcohol! In June 1873 First Nation peop­le were killed in the Cypress Hills Massacre. 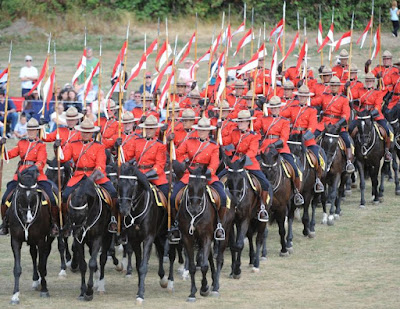 Mounties dressed in their red uniforms, on parade

Based on the Royal Irish Constabulary, Macdonald initially called the organisation the North-West Mounted Rifles, but changed "Rifles" to "Police" to avoid arousing the USA’s suspicions. Mac­donald bel­ieved that the appearance of the unit should reflect its purpose: an efficient police force, para-military in nature, for the ready enforcement of the law. Full dress consisted of a scarlet jacket, black riding boots with steel spurs, a Russian leather pouch belt and sword slings.

In July 1874 300 officers and men of the NWMP set out from Duffer­in Manitoba, with carts, wagons, field guns and a Métis scout. On a gruelling two-month, 1,300-ks march across wild prairie, men and horses endured extreme weather, hunger, disease and insects before reaching south Saskatchewan. There the contingent split, half to set up a police post at Fort Edmonton and half to Fort Whoop-Up.

For 15 years, WMP concentrated on building close relations with First Nations. The police forged diplomatic links with the Blackfoot Confederacy, which included a friendship between the 2nd commissioner Lieut-Col James Macleod and Crowfoot Chief of the Blackfoot. The NWMP convinced Indigenous leaders to sign treaties with the Canadian government and to move their people onto reserves - some considered the treaties to be mainly fair while others considered them to be the start of cultural genocide. 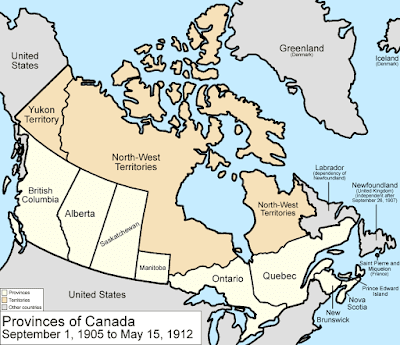 NWMP policies towards First Nations contrasted sharply with those of the USA Army south of the border, where there was open war with Indigenous people. In 1876, after the Battle of the Little Bighorn in the USA, thousands of Sioux followers of Chief Sitting Bull sought refuge in Canada, rather than being forced onto reserves by American soldiers.

By 1877 it was a tricky time for the Force's relations with Canada's First Nations. The NWMP feared the influx of American Sioux would threaten the peaceful relations between Canada and its own tribes, especially since the Sioux were traditional enemies of many Canadian tribes. The NWMP therefore paid attention on ensuring a] the American Sioux obeyed Canadian laws and b] eventually returned to the USA. How many did?

In the early 1880s, unrest smouldered among the First Nations reserves due to the disapp­ear­ance of the bison herds, crop fail­ures, bullying of Canadian Pacific Railway surveyors and disenchantment with the central government. The NWMP was increased to 500 men, but even that number was inadequate.

Clearly the cost to the First Nations was great. The treaties required the tribes to give up vast tracts of territory and their traditional way of life, reducing them to a state of dependency. And the NWMP failed to protect Indigenous interests amid the tide of white settlement, and the arrival of the Canadian Pacific Railway.

Louis Riel was a political leader of the Prairies Métis people. In 1885, under Riel’s leadership and with the support of the Cree Chief Big Bear, the Métis led the armed North-West Rebellion of 1885 against the Canadian government. The fighting that followed killed hundreds of people, before the Rebellion was crushed by the police and federal troops. The rebels’ defeat had taxed the Force to its limit; but Riel’s hanging marked the subjug­at­ion of the Métis and Plains people by Ottawa. 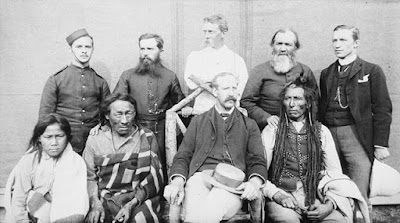 After the rebellion, Commander Lawrence Herch­mer enhanced Law and Order, thus preparing the police to cope with the coming waves of settlers. They performed civic duties, solved rob­beries, retrieved missing livestock and broke up American rustler gangs along the border. The constables enforced the law in white communities and on Indigenous reserves.

Then a new potential crisis arose. The established NWMP post near the Yukon community of Forty Mile received news in 1896 of a major gold strike on the Klondike River which led to a stampede of diggers. The NWMP quickly set up checkpoints en route to gold­rush capital Dawson City. Their strict enforcement of regulations on the Klondike prevented many diggers from dying by exposure and starvation. And criminals from Skagway Alaska were denied entry. By 1898, there were 30,000 men scouring the Yukon and Alaska for gold, yet the Gold Rush turned out to be very orderly.

The Force supplied many officers and NCOs for the Canadian mounted regiments that went to the South African Boer Wars in 1899. Then the NWMP expanded its authority north of the Arctic Circle and in 1903 established the first Arctic police post at Fort McPherson. 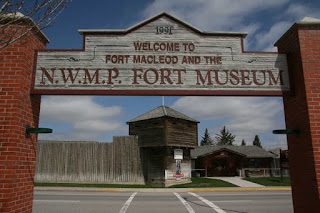 In 1920, the name was changed to the Royal Canadian Mounted Police. Since 1957 the Fort Museum of the NWMP in Fort Macleod Alberta has been preserving the history of the NWMP and local First Nations.

Hello Hels, The U.S. "Old West" and the Canadian Mounties have an allure that can never fade, despite the harsh realities that actually transpired in their heyday. I appreciated learning more about the more sensible, Canadian side of dealing with these open territories. One famous legacy of the Mounties is the musical Rose-Marie. I half-expected the computer to start automatically playing Jeanette MacDonald and Nelson Eddy singing the Indian Love Call when I was reading your article!
https://www.youtube.com/watch?v=f8KesxHBVOU

Applicants are assigned to a troop of 32 Cadets and sent to the Royal Canadian Mounted Police Academy in Depot, in the city of Regina in Saskatchewan. Training at Depot is 26 weeks long and covers all the necessary skills and knowledge RCMP Officers will require.

The RCMP works 24 hours a day to maintain and ensure peace and safety throughout the country, therefore, all RCMP Officers are expected to serve nights, weekends and national holidays whenever necessary. They are also required to relocate to any part of Canada to serve at their post, special considerations can be taken, but it depends mainly on the Force’s needs.

Even in the 1800s Canada seems like it was a more civilised place than south of the border. For many, myself included, the word Mountie causes a certain frisson. We saw the real thing...where...Banff I think.

Hi Hels - thanks for the history of the transfer of the HBC lands to the government and then that progression in the 1870s onwards. Good to read about the Mounties too and how they all started. Cheers Hilary

people still say that about Canada - more sensible stable people, no guns in homes, no capital punishment etc etc. And I think it was, and is still true.

But the NWMP negotiated with Indigenous leaders to sign treaties with the Canadian government and to move their people onto reserves. No massacres involved, but most likely the start of grievous cultural losses for indigenous tribes.

Since only Quebec and Ontario have provincial police forces, it means cadets are going to be sent a longgggg way from home. But then I suppose they know that, before they apply to be cadets.

me too. I had expected the Mounties to be only in the far flung, snowy north. So it was quite surprising to see them in Winnipeg which is only 100 ks from the Manitoba-USA border. Very handsome, well groomed chaps.

I hope all Canadian school and uni students are aware of the history of the Hudson's Bay Company, the transfer of the lands to the government, Canadian Confederation and the North Western Mounted Police. Possibly not, if they are anything like Australian students.

I don't remember doing a great deal of Canadian history, especially the history of the North West Mounted Police. More's the pity.

That is so. Most of our interest in Canada over the years has rested on France, Britain, the USA and the provinces joining up to Confederation over many decades.

The concept of the North West Mounted Police was a particularly Canadian response to a specific Canadian issue. A good one!

Hels, I think you've got a not-so-secret crush on those men in their smart uniforms! The Mounties have always that allure. Never fading as Jim says.
CLICK HERE for Bazza’s recondite Blog ‘To Discover Ice’

I like the idea that some organisations in Canada have become, via tradition or public perception, symbols by which Canadians identify themselves, none more so than The Mounties. They are also understood internationally as being distinctly Canadian. This particular image is said to be fastidious, very polite, ruggedly handsome and morally pure :)