How did King Ludwig II of Bavaria really die in 1886??

Born in Nymphenburg Castle Munich, Ludwig (1845-1886) was a mem­ber of the Wittelsbach dynasty. He became King Ludwig II of Bavaria in 1864 at 18 when his father died, but alas for the Bavarians, Ludwig had no interest in politics. He became a lonely, isolated man, with no wife and no friends. His diaries suggested this devout Roman Cathol­ic king struggled with his sexual orientation during his adult life. He was either straight, gay, bisexual or celib­ate, worry­ingly eccentric and he built expensive mountain castles.


Wagner trained Ludwig's brother Prince Paul von Thurn und Taxis in his opera Loh­engrin, per­formed for the king's 20th birth­day in Aug 1865 in Hohenschwangau. The opera was well staged with Prince Paul dressed as the hero Lohengrin in silver armour, drawn over the lake by an artificial swan. The King sat alone, enraptured with the music.

King Ludwig was possessed by the idea of a holy kingdom by the Grace of God.  Yet he had only two passions in life: castle building and Richard Wagner's (1813-83) music. He financed almost all the old­er comp­oser's projects, had Wagner stay in his castles and bailed Wagner out when he was in debt. When Wagner was forced to leave Munich for Switz­erland, Ludwig retired heartbroken to Hohen­schw­angau.

Originally the king had intended to surround his kingdom with five castles. The first was Castle Neusch­wan­stein, started in 1869 on top of a craggy, isolated mountain. The rooms that were finished had Wagner’s operatic themes in their wall dec­or­ation. The great Singer's Hall, where private perform­ances were held at huge costs, had heroic scenes from Lohengrin and Parsifal. 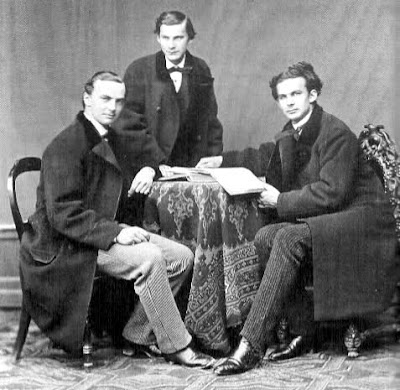 The second was Linderhof Castle, west of Oberammergau, a palace that was also comp­leted. Isolated among the quiet rural landscape, Lind­er­hof contained only ten rooms, mostly servants’ bed rooms and waiting rooms.

By 1885, Bavarian Cabinet saw that Ludwig's castle-building was continuing unabated. By then the King had 3 very expensive pro­jects well under way. Al­though Ludwig paid for the castles and private performances out of his own pocket, it was still diverting his focus away from the affairs of state. And he refused to meet his government ministers. 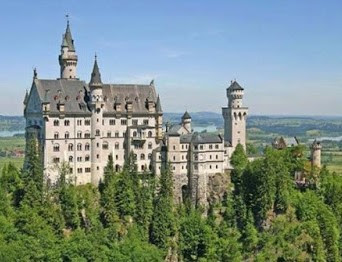 Neuschwanstein Castle
Seven weeks after King Ludwig's death in 1886, the castle was opened to the public.

King Vs the Bavarian Cabinet.
In 1886 Ludwig was warned of danger by a servant and ordered the local police to protect him, which they did. Ludwig feared he might have been declared insane by psychiatrists and deposed. So to protect himself, he in­vest­igated the possibility of HIS ousting the Cabinet instead.

Cabinet got wind of Lud­wig’s plan and had to strike first, to get rid of their unwanted King. So three eminent psych­iat­rists (who had never actually met the king) ruled that the king was perm­anently in­sane and Ludwig was declared unfit to rule. The king had the support of his Bav­ar­ian people, but that couldn’t protect him against a rabid Cab­inet. When the king did decide to escape, it was too late.

Did Cabinet want to depose the reclusive Ludwig because he was squandering fortunes on bizar­re building projects and driving his kingdom to ruin? Or because he was insane? In June 1886, psych­iatrist Dr Bern­hard von Gud­den diagnosed him as having par­anoia-schizophrenia; officials arrived to place the king under arrest. He was imprisoned in Castle Berg near Munich where it was officially ann­ounced that his brother Prince Otto was to rule as permanent Regent.


Three days later Ludwig II asked his psychiatrist to walk to the local Munich lake with him; the two men were never seen alive again. Their bodies were found floating in the shallow lake wat­ers. Given that Ludwig was doing everything he could to get his crown back, did anyone believe this devout young (41) Catholic king murdered the von Gudden and committed suicide himself? Or was it a double murder by a stranger? or perhaps a double ac­cidental drowning? 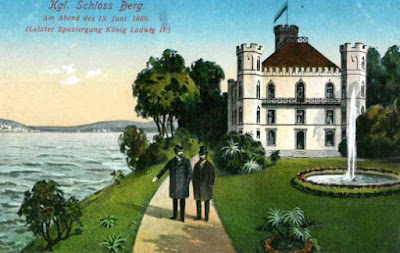 The Bavarian government's official version was that it was forced to depose the reclusive Ludwig because he was squandering vast sums of money on his castles and driving Baravaria to ruination. Because his psychiatrist had diagnosed him as suff­ering from paranoia, they said, the ex-King must have reacted to losing his crown by drown­ing himself in a fit of par­a­noid anger.

The drowning theory sounded ridiculous to the many who knew the king. Firstly Lud­wig II was a very good swimmer. Secondly the lake was too shallow to drown. Thirdly in his original autopsy, there was no water found in Ludwig's lungs.

Modern Evidence
Now, c130 years after the king's death, new details have emerged. In a sworn affidavit, a 60-year-old Munich banker called Detlev Utermöhle recalled a scene from childhood. He and his mother were invited for afternoon tea by a Countess Josephine von Wrba-Kaunitz, who looked after some of the Wittelsbach family's ass­ets. The countess said "Now you will find out the truth about Ludwig's death without his family knowing. I will show you all the coat he wore on the day he died." The countess opened a chest and pulled out a grey Loden coat. Utermöhle saw two bullet hol­es in its back and saw his late mother’s written account. 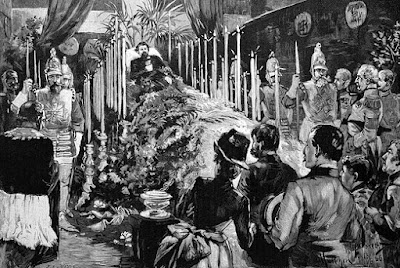 Additionally Jakob Lidl, the king's personal fisherman, left notes concerning the death of King Ludwig II. He was hid­ing in the bushes when a boat arrived to rescue the king. Shots sudden­ly rang out from the shore, from assassins hired by the Bavarian gov­ern­ment to kill the king. Lidl said that Dr Von Gudden was shot as a witness. This I can believe!

Unfortunately for Mr Utermöhle, the king's coat was lost after a fire at Countess Wrba-Kaunitz's home in 1973 in which both she and her husband perished.

And there was evidence from Siegfried Wichmann, a Bavarian historian of C19th art who published an un­known photograph of  the king's post-mortem portrait. The port­rait showed blood oozing from Ludwig's mouth from the lungs, and not from drowning.

The details are convincing enough to increase calls for the House of Wittelsbach, King Ludwig's family, to allow his body to be ex­humed from its tomb in St Michael's Church in Munich. Swiss scientists could scientifically exam­ine the corpse by giving it a CT/computer tomography. While the pro­cedure would not touch the body, it would show any gunshot wounds. But over the many decades since, no medical reports were ever re-opened for experts to analyse. The disbelief continues.

I suppose nothing would be changed by knowing either way how he died, but it would be interesting. But should a body be exhumed just because it is interesting. Perhaps not.

Hi Hels - he certainly was a strange and lonely man ... sad for his unfortunate demise ... interesting post - thanks ... cheers Hilary

let me make a comparison.

How do you know when Trump is lying? When his mouth moves!

Exactly the same could be said for the Bavarian politicians.

When the teenage Ludwig took the Bavarian throne in 1864, he was very ambitious. He wanted to preserve Bavarian independence, create strong ties with Prussia and Austria, and create a cultural renaissance based on Wagner. But as his mental instability increased, so did his fear of allowing anyone to see him, including his fiancee (he was briefly engaged) or his butler.

I would also say his passion for Wagner bordered on the obsessive.

Wagner was not a very fine person. What a shame that Ludwig tied himself to that particular man's coat tails.

Hello Hels, The Borgias, Romans, and Chinese, among many others, have shown possible courses of action when someone is in the political way. So it is not much of a surprise what happened to King Ludwig. About his connection to Wagner, I agree with Joseph, although I doubt that this in itself disturbed Ludwig's enemies too much.
--Jim

years ago I wrote that Ludwig listen passsionately to Wagner's music, financed almost all the composer's projects, had Wagner stay in his castles as often as possible, bailed Wagner out when he was in debt and wrote hundreds of love letters to him. But did Wagner ever thank the king for his limitless patronage? Apparently not.

Ludwig requested the presence of the conductor and piano virtuoso Hans von Bülow and his wife Cosima, to help Wagner in all his musical activities. Alas Cosima and Wagner fell in love and their relationship forced them to leave Munich for Switzerland :( Ludwig retired to the castle Hohenschwangau and was suicidal. When Ludwig forced Wagner to turn over the scores of Siegfried and Die Walküre and produced them himself, the two men parted forever.

nod. Kings and queens have always faced the risk of execution, in war and in civilian life, after a trial or illegally. Even in more modern times, we only have to think of Henry III of France, King Henry IV of France, King Charles I etc.

But King Ludwig was different. The parliament could have asked his brother to act as Ludwig's regent, sent the king into exile or got him certified by psychiatrists as mentally incapable of ruling. Killing the young man (and his psychiatrist) was appalling.

Wonderful article. I lived in Munich for a year long ago and visited most of the Royal palaces. When I was back in 2015 the assassination theory was very openly discussed by several of us on the train back from Neuschwanstein. The conclusion we came to was that the Bavarian Ministers had him killed because who wants an ex-King around mucking up the works. Divided loyalty and all that, like the English exiling Edward VIII. Thank you for an interesting read.

perfect timing. How many people would be discussing Ludwig's assassination on a train in Bavaria? We are soul mates :)

King Edward VIII felt forced to abdicate because the Church and Parliament would not accept a multiply married, multiply divorced foreigner as Queen. But I think the core reason was because once married, Edward and Wallis toured Germany just before WW2 and indulged their strongly held Nazi sympathies.

Now where does Lola Montez fit in to this picture . I was under the impression that the King had a thing fro her as well and spent large amounts of money on her . Maybe I have my wires crossed. ?

Right family, wrong generation. King Ludwig I of Bavaria rooted anything with a pulse. So he was a perfect match for the very lovely Lola Montez. It only fell apart when, in 1848, revolutions threatened, Ludwig I abdicated and Lola Montez went into exile.

Ludwig I's grandson Ludwig II took the throne in 1864, but the young man wouldn't have been interested in a mistress, even if she was brought to him on a tray.

mm but the streak of eccentricity seems to have carried on !!

Fascinating history, I had not heard of this before. But...

It seems quite familiar in many ways to other stories of power struggles over the eras.