Philip Guston's attack on KKK racism via his art. 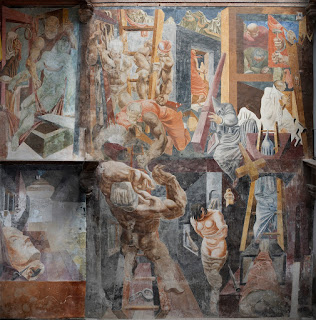 Philip Goldstein Guston (1913-80)’s Ukrainian Jewish parents es­cap­ed pog­r­om violence so they moved to Canada from Odessa. Philip was born in Mon­t­real then moved with his family to Los Angeles as a child. His parents had been brutally aware of Fascistic anti-Semitism at home, and Philip became aware of the regular Ku Klux Klan actions against Jews and blacks across California. Per­haps due to the earlier persecut­ion, Philip’s father tragically hanged himself.

In 1934 Guston went to Mexico with his artist friend Reuben Kadish & poet friend Jules Langsner where they were given space in Emperor Max­imilian’s former summer palace. These artists created the impressive The  Struggle Against Terror (1934-5), an anti-Fascist and pro-worker mural. The 3 colleagues, all Jewish sons of Eu­r­opean parents, were clearly sen­sitive to racist pol­icies in the USA and faced Red-baiting, witch-hunting and anti-Union activities of the KKK in response. In any case, criticism of the Catholic Church led to the mural being hidden away in the early 1940s.
Celebrated mainly for his abstract art, Philip Guston later decided to move into figurative painting that included the Ku Klux Klan motif. In this post, I am focusing solely on the later, anti-Fascist images of this pol­itically-engaged artist. 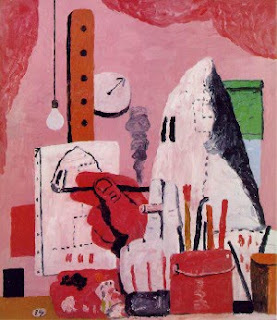 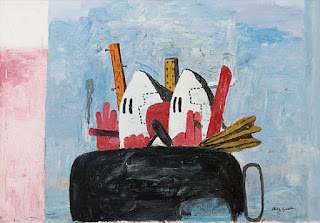 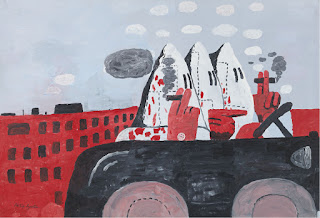 Now let me cite the papers Guardian and NY Times that told the story of 4 important art instit­utions (Nat Gallery of Art Washington; Mus­eum of Fine Arts Houston; Museum of Fine Arts Boston; Tate Lon­don). They were to host the much awaited travelling exhib­ition in 2020: Philip Guston Now. And giv­en the surging racial jus­tice pro­tests in the USA this year, the c125 paintings and 70 draw­ings were going to be exhibited in the perfect year for depicting rac­ism.

The decision to postpone the Guston show, which except for coronavirus would have begun earlier this year, caused conflict on both sides of the art world. So the retrospective was post­poned, not for 3 months but for 4 years!! The four galleries said they’d wait until the pow­er­ful message of social and racial jus­tice at the centre of Gus­t­on’s work could be more clearly under­stood. There was, they said, a risk that Guston’s messages could be misint­erp­reted and the resulting response could over­sh­adow the totality of his le­gacy. And the 4 museums wanted to avoid painful experiences that the imagery could cause for viewers in 2020.

The directors recognised that the world was very different from what it had been in 2015, when they started the Guston project. The works that most ignited their concern were the white-hooded Ku Klux Klan figures. These white-hooded figures were images that the justice-focused, Jewish and left-wing artist had repeated from the early 1930s to his death. The directors felt it was necessary to reframe their program­ming, to step back and bring in new perspectives to shape how they pres­en­t­ed Guston’s work to the public. That process will take time: until 2024. 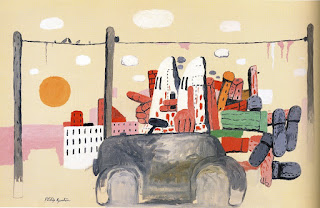 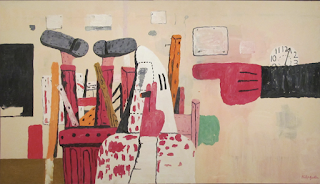 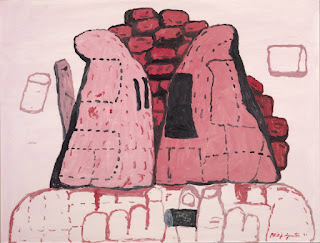 Art Daily reminded readers that art museums have, in the last three years, increasingly found themselves on the defen­sive for showing works that depicted racial violence. Some observers have protested the showing of work considered traum­at­is­ing to communities sc­arred by that violence. Some work was re­moved from exhibitions. One painting was considered so sin­is­t­er by the Ku Klux Klan that it was shot at and destroyed by Klan supporters.

But art academics told the Guardian that Guston’s work was exactly the kind of art that still needs to be discussed today. Guston’s work was deep; he had the foresight to see things as they were happening and his im­ages are as poignant now as they had ever been. Art was not sup­posed to be a pretty picture; it was actually a reflect­ion. So an exhibition org­an­is­ed several years ago, no mat­t­er how intell­ig­ent, must be recon­sid­ered in light of what has ch­anged. Thus the four museums seemed tone-deaf to what is happening in public dis­course in 2020.

Guston’s daughter, Musa Mayer (b1943), said that she was saddened by the decision from the museums to postpone the exhibition. Her fat­h­er had dared to unveil white culpability, the shared role in all­owing the racist terror that he had wit­nessed since boyhood. Her father had made a body of work that sh­ocked the art world; he had violated the canon of what a noted abst­ract artist should be painting, at a time of doctrinaire art criticism! Furthermore he dared to hold a mirror to White Amer­ica, exposing the Banality of Evil and the systemic rac­ism the US was still struggling to confront today. In these works, car­toonish hooded figures evoked the Ku Klux Klan. They planned, plotted and rode around in cars smoking cigars. The viewer never saw their acts of hatred, never knew what was in their minds. But it was clear that they were us. Our denial, our conceal­ment.
Musa believed this should be a time of reckoning & dialogue. The danger was not in looking at her father’s work, but in looking away.

Conclusion
Guston always considered his own KKK art to be about the pervasive­ness of evil and white supremacy. A curator at the Modern Art Mus­eum Fort Worth in Texas, who organised their Guston survey in 2003, concluded the case well: If the goal of the 2020 exhibition was to survey the late artist’s career in a contemporary context, it is ironic that if ever there was a poignant time to have these Guston images shown, it would be now!

I find the KKK paintings very disturbing, and if that was his intention, they work. I suppose galleries self censoring is not new but still in this case, very disappointing.

Without sounding like a conspiracy theorist, perhaps President Trump put pressure on the galleries to thank his KKK and Proud Boy supporters.

Hello Hels, Today, more than ever, with art museums (as with so many other areas of life) it is a case of the patients running the asylum. Museums less and less have a leadership role in instructing the public. Instead they present what is warm and fuzzy (at least by today's standards), and more and more "name" pictures, even if they are not the artist's best work. In welcoming larger segments of the public, museums have given up all connoisseurship*, and have become lowest-common-denominator venues for electronic interactive activities which keep people focused on screens, never looking at the actual art hanging nearby.
--Jim
* Just to illustrate how standards are slipping, the word "connoisseurship" was not in my computer's spell-checker!

I thought the KKK paintings actually looked rather mild, given that there were no guns, no lynchings and no viciously attacked black Americans. Rather the KKK men were shown smoking, driving and working. If it wasn't for the pointed white hoods, the viewers probably would not have learned much from Guston's works.

I agree... the galleries' decisions have been very disappointing.

conspiracy theories are usually easily dismissed. But when President Trump would not criticise his Fascist supporters in his speeches, everything changes.

The first delay for "Philip Guston Now" was caused by the pandemic and would have been held in 2021. As with exhibitions in galleries all over the world!

But the delay till 2014 is very suspicious.

Is it true that to be attractive to larger segments of the public, even significant museums have had to become lowest-common-denominator venues for the computer generations? I hope you are wrong, but I need to admit one shocking discovery of my own. In previous generations students in high school English classes had to read and analyse one novel per term. Now the children can choose between a novel per term or a film per term. No-one need ever read a book!

Hi Hels - I suspect that the galleries decision is probably sensible ... I would hope that by 2024 (though could be later) that we're able to exhibit all kinds of art ... so we can evaluate for ourselves. Also with any luck the virus will be under control and more people will be able to visit ... I hadn't heard about him - so thanks for highlighting him and his art. All the best - Hilary

of course all public spaces must close down during the pandemic. Even after it ends, if it ever does, numbers of visitors must be kept down, masked and separated.

But in the meantime, I am very pleased that this post has raised some interest in an artist our generation might not have known. On the net I easily found Guston works that I'd never heard of before... about the KKK of course, but other subjects as well.

Abandoning self-deception helps dispel mystery. Nobody mentions antebellum quadroon balls and only recently has rape of slave women become as mentionable as it was when Harriet Beecher Stowe's books were new BEFORE the War Against the Protective Tariff. Theodore Roosevelt's 1903 "race suicide" letter let the mask slip even before the Harrison and Mann Acts targeted pugilists like Jack Johnson. Ku-kluxers blossomed anew when Wilson was elected. His view they were as harmless as tee-totaling fratboys was believed by D.W. Griffith moviegoers. But prohibition of beer, with the consequent economic crashes, increase in communist sympathy and heroin use was over the line. After the Klanbake scandal and nomination of Whiskey Al the papist, the Klan defected en masse to the GOP and swore allegiance to Herbert Hoover. Hoover's Dry Crash, Depression and Moratorium aid to German National Socialism in exchange for German laws regulating heroin was the binding Quaker pact with Positive Christian National Socialism. Finally, after Nazi appeals at the war crimes trials for an alliance against Bolshevik atheism ripened into the George Wallace campaign against racial mixing. Outliers JFK, RFK and George Wallace conveniently shot and Quaker Nixon's party revived the faith-based, prohibitionist Christian National Socialist Gentlemen's Agreements none dare mention for fear of being branded as anti-mystical (hence pro-communist). Since the Nixon campaign subsidies began in 1971, both halves of The Kleptocracy have relied on fanatical hate mobs for the votes necessary to keep a hand in the till. This brings us to today's Tatsuya Ishida cartoon at sinfest.net.

Thanks for the detailed response.... but I would love comments to be limited to, say, 3 sentences :)

Afterall I still don't know how you feel about Guston's art and who you think gained from the long-term postponement of the exhibition.