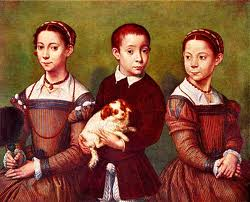 Wil­l­iam Shakespeare (1564–1616) left school at 16, but how did he make his liv­ing? What is well documented in the reg­ister of the Worcester Diocese in Nov 1582 is his marriage licence. Will­iam was 18; Anne Hathaway was 26, and was app­ar­ently very keen to marry. They needed the Bishop's permission to marry without the cus­tomary saying of the banns 3 times. Just as well, because Anne delivered a full term baby girl Susanna 6 months lat­er. Anne had 2 more children, twins Ham­net and Judith, all be­fore William was 21 himself. Hamnet sadly died at 11. Susanna (left) and twins Hamnet and Judith, above
Painted before Hamnet died in Aug 1596

In June 1607 Susanna married the prosperous Stratford phys­ician John Hall. Her marriage to Hall must have greatly pleas­ed Shakes­peare who appointed the young couple exec­utors of his will. In Feb 1608 Susanna had a baby girl. Shakes­p­eare's grand­daughter, Elizabeth Hall, was baptised at Stratford’s Holy Trinity Church.

By 1613 the young family bought Hall’s Croft, a newly built middle-class home in Strat­ford’s Old Town. Today their timbered Jac­obean home is listed and open to the public, with a very special wall­ed herb garden.

After William died in 1616, the Halls moved back into the Shakes­p­eare family home, the very valuable New Place. They did so to prov­ide company to the widow, Anne Hat­h­away Shakes­p­eare, un­til she herself died 7 years later and was bur­ied alongside William in Holy Trinity Church. Anne had not inherited New Place personally as it was assumed that the Halls would move in to look after their moth­er. With no male heir, William instead bequeathed the bulk of his large estate, inc­luding properties in Stratford-upon-Avon and Lond­on, to his older daughter Susanna. 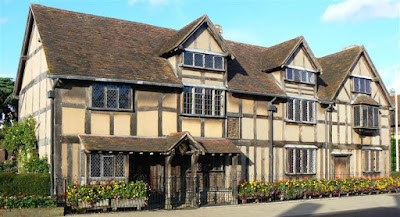 If people believe Susanna’s reputation as a very intelligent woman, it is probable that she would have managed the printed work of both her father and husband, Stratford’s most celeb­rated men.

William’s only granddaughter Elizab­eth, greatly loved by her papa, was both a direct and ind­irect benefic­iary of his will. It stated that on Susan­na’s death all that she had inherited from her father was to pass to either her male heirs, or, if none, to Elizabeth.

New Place, now  Nash’s House Museum, is a grade I-listed museum that traces Stratford-upon-Avon’s history. New Place was ruined in 1759, but a memorial garden designed and looked after by the Shakespeare Birthplace Trust still stands, with a Mulberry Tree grown from a cutting planted by the Bard himself. The Royal Shakespeare Co’s Theatre, which stages productions of the Bard’s work, is close by.

Dr Hall left detailed records of his medical practice which amaz­ingly rev­ealed his own treatment for scurvy made from local grasses and plants high in ascorbic acid, 100+ years before James Lind's discovery regarding citrus fruit. When Susanna herself contracted scurvy, John's treatment was completely successful.

John Hall died suddenly in 1635 and was buried close to Shakespeare at Holy Trinity Church. Susanna died in 1649, at 66, and was also buried close to her parents William and Anne’s graves. The first stanza of Susanna’s epitaph says it all: “Witty above her sex, but that’s not all / Wise to salvat­ion was good Mistris Hall.”

Elizabeth Hall lived a noteworthy life indeed. John and Susanna had ensured their daughter Elizabeth was well educated and saw that her handwriting was well formed and clear like that of her father. Hap­p­ily Elizabeth also reached adulthood and met the son of Anthony Nash, William’s good friend and land agent.

In Elizabeth and Thomas Nash's court­ship, she was 14 years his junior. Thomas had attended Oxford Uni and entered the Honourable Society of Lincoln’s Inn, one of four Inns of Court. He never practiced law but was already a com­fortable business man when they married, in 1626. The young couple moved into New Place, and lived together happily. 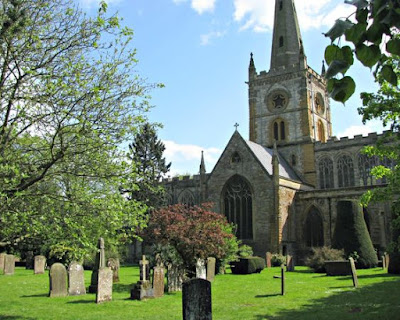 Nash died in 1645 and four years later Elizabeth married her second husband. John Barnard was an old Shakespeare family friend and lik­ed the idea that Elizabeth could look after his large house­hold of 8 children. They were mar­ried in Billesley, a rural parish west of Strat­ford-upon-Avon, chosen so the wedding might slip through the authorities’ net: note that Church of England’s marriage rites were ban­n­ed during the Interregnum (1649-60)!

Barnard became a Justice of the Peace and accepted a knight­hood from King Charles II in Sept 1661, making the Bard’s grand-daughter Elizabeth Lady Barnard. The Lord and Lady of the Manor both lived the remainder of their years in the midst of pastoral park­land at Abington Manor, John's sprawl­ing estate in North­amps, with his 8 children.

Elizabeth herself had no child­ren and was Shakespeare's last des­cendant. She died in 1670, at 62. She had entrusted her Stratford-upon-Avon properties, including New Place, to a man who sold it on her behalf. The large Barnard entourage moved out of Stratford-upon-Avon to Abington Park Manor. John Barnard’s country estate-museum now houses local history displays, art exhibitions and more.

William’s other daughter, Judith Shakespeare, had a sadder life. Unlike her sister's marriage to Dr Hall, Judith's marr­iage to wine maker Thomas Quiney in Feb 1616 led Shakespeare into scandal. Quiney did not receive the license necessary for a wedding during Lent before his marr­iage and thus the couple were excommunicated. Quiney was pros­ecuted for carnal copulation with the local woman Margaret Wheeler, who had died in March, along with Quiney’s baby. He confes­s­ed and was sentenced to perform public penan­ce, soon commut­ed to a small fine and private pen­ance. It was speculated that this scandal may have hastened Shakes­peare's death; he died a few weeks lat­er, after changing his will to protect Judith's inherit­ance from Quiney.

Nonetheless Thomas & Judith had 3 children: Shakespeare, Rich­ard & Thomas. Shakespeare Quiney died in infancy and was buried in 1617; he never met his grandfather who had died only a year before. Richard and Thomas died from the plague within weeks of each other (aged 21 and 19) and were buried in 1639. With the death of her husband c1652, Jud­ith was alone. She lived to 77, and was buried in Feb 1662. But there was no epitaph praising her wit & wisdom. 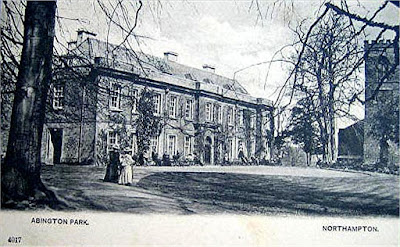 The family line of the great English playwright ended just 54 years after his own death. At least William Shakespeare had lived long enough to love his first grand­child and had the pleasure to see the Hall family very happy.

This history follows Amanda Mabillard and Jenny Rowe, as closely as I could. Many thanks.

Only one of the family lived to a decent age. We might have expected that educated and financially stable families would have seen lots of grandchildren survive. Except during pandemics of course.

Hello Hels, We know that Shakespeare was smart, which he demonstrated once again by leaving clear wills that would protect his family the way he desired, especially in a day when women were so easily victimized and without recourse.
--Jim

It's sad that there are no extant relatives of Shakespeare's line. There are modern Shakespeares who could be descended from cousins of his. Stratford-on-Avon is still a lovely place to visit and has lost none of it's charm. The first painting, of his children, looks remarkably modern in style and composition!
CLICK HERE for Bazza’s recklessly risible Blog ‘To Discover Ice’

The scurvy treatment is very interesting and if it worked, why wasn't the news of its success spread and it come into common use?

from what I can find, the average life expectancy in the late Elizabethan era was 42, older for families with plenty of money for food etc and younger for low income families. As you noted.

William's only son (Hamnet) and his three grandsons (Shakespeare, Rich­ard and Thomas) all died very young, but his wife, daughters (Susanna and Judith) and only granddaughter (Elizabeth) lived to good ages. Shakespeare mentioned plagues in his writing, with the 1603 pandemic killing the most people, but the Shakespeare family seemed to survive that particular tragedy.

I agree that the women were well looked after in the family wills, especially since there were no males alive to look after their interests. I am also very pleased that the lawyers honoured the women's rights.

I also loved Stratford-upon-Avon, both Will's and Anne's childhood homes in particular. Thank goodness they were owned and protected by the Shakespeare Birthplace Trust. London's Globe is also impressive but visitors understand it was recreated and not original.

he changed the whole world of literature, didn't he? Not just for English speakers.

If only the British Medical Journal existed then, Dr Hall's detailed records of his scurvy treatments, and successes, would have been given to patients and assessed!! And he wasn't alone. Like Hall, Sydney Humphreyes recommended brewing ale with scurvy grass and water cress, 100+ years before James Lind and his citrus fruits.

The opposite is also true. Thump took dexamethasone as part of his COVID-19 treatment, despite the top researchers saying it absolutely should not be used, except when the patient's condition is particularly severe.

I saw your post on the Shakespeare children and have to confess that I am a Shakespeare denier, one of those who believe the plays and poems were written by someone else. I agree with the Oxfordians who claim that the author was Edward de Vere, the Earl of Oxford.

If you haven’t done so already I think you should turn your investigative spotlight on de Vere and his children, who are even more interesting than those of the Man from Avon.

Below find a link to my brief essay on the question.

many thanks for the link. I too have heard stories about work being attributed to Shakespeare when it was actually written by other people. I know little about Edward de Vere, the Earl of Oxford. But the ONLY joy about total lockdown is that I have plenty of time to read :)

Three children before the age of 21 but of course his wife was much older. It is interesting to learn how he protected his daughter and granddaughter's inheritance.

I believe the girls grew up with skills because Anne and the children always lived in Stratford while Shakespeare, except for the holidays, worked in London. Perhaps William had no choice but to work in London, if he wanted to be famous and wealthy from theatre. Or perhaps he didn't want to be burdened by the tedium of family life.

William didn't invest much of his wealth in real-estate purchases in Stratford, where he bought the large family home New Place, until 1597.

The scurvy treatment is interesting . It still happens . any patient who has a leg ulcer that doesn't heal is suspected of having scurvy unless proven otherwise.so many people just dont get enough fresh fruit and veges.

it amazes me that Dr Hall was working hard on resolving the scurvy problem in 1630, with some success, and yet there are still problems today.

That reminds me. Most generations are so self centred that we assume everything worth knowing in science, medicine, art, film, music and literature etc was largely discovered or invented in the last 20 years.