Australia's best ever advertisement. It's for beer - imagine that! 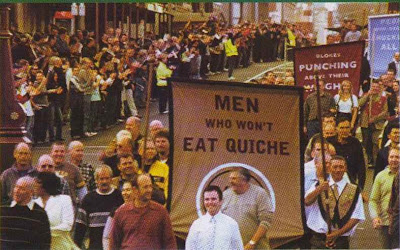 One of the few truly clever advertisements on Australian television promoted Victoria Bitter, a best-selling Australian beer. Since I rarely watch commercial television, and I don’t drink beer, it is very interesting that the campaign for a beer company would attract my attention. You can see the full advertisement in YouTube.

In 2009 when this ad was created, Australia drank more beer per capita than any country on earth except for Czech Republic, Germany and Ireland. Yet this advertising company wanted an ad that had that familiar VB feel – down to earth and uniquely Australian. And they also wanted to pitch the ad at modern drinker. Did they succeed?
What banner do you march under? (top image)
The Courier newspaper, 2009

The ad’s narrator was sublime. He discussed each group of men as the group passed through the historic gold town of Ballarat in a long parade, something like the Olympic Games. Two people proudly carried a banner in front of each group, describing what the men in that group had in common: “Blokes punching above their weight” (ordinary looking men on the arms of gorgeous looking women); “Men who’ve had their arm in a cow”; “Guys who peaked in high school" (a long time ago); “Blokes who chucked a sickie” (they got a bogus medical certificate to get off work); “Men who claim to have punched a shark”; "The salad dodgers" and the best of all, “Men who won’t eat quiche” and “People who dream of chucking it in”. Irony is certainly the most favoured form of humour in Australia.

There was a holiday atmosphere in this rural city. 2,000 locals enjoyed their 15 seconds of fame as they marched down the main street, smiling at flag-waving well wishers on both sides of the road and up on second storey verandas. It was typical larrikin stuff; the men apparently did not mind being made to look just a tiny bit ridiculous for a beer ad. Either that ... or Australian men never take themselves too seriously. So I loved the narrator's observation that "there were touching moments of reflection" in the groups of men walking under the banners that they had selected. Perhaps the tears came because of the internationally famous cricketers (Michael Clarke, Peter Siddle, Nathan Bracken, Shane Watson etc) who appeared in the celebration-themed commercial. 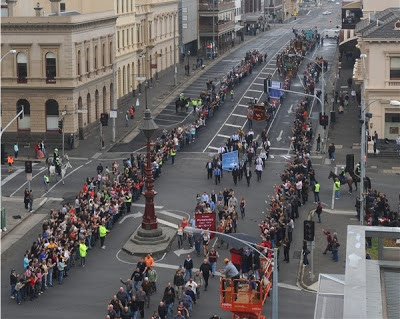 The parade, May 2009
The Courier newspaper

For an art historian, the creators of the advertisement could not have chosen a better site for filming than Ballarat. The city’s historical architecture in Lydiard and Sturt Streets, based on the Gold Rush from the 1850s on, was perfect. No sets had to be built; in fact no sets could have matched the natural beauty of the existing cityscape. No trams lines ran down the centre of town to spoil the view and all electric power lines were already underground.

It was a mainstream beer that was talking to mainstream Australian blokes, so the ad had to be quintessentially Australian. Hoppsy specifically identified the cricketers, footballers, streakers, Victorian pub architecture, brass bands. And I would add the sloppy men’s clothing. That it was also accurate was attested by one woman who wrote: "Sadly my hubby fits into a few too many of those categories". If my own beloved was in Ballarat during the filming, I Helen would have entered him behind the “Men who should have read the instructions” banner. 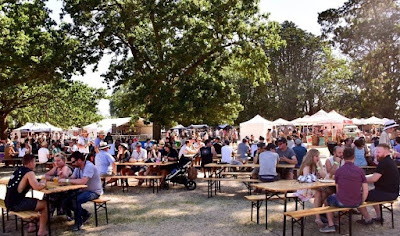 The Ballarat Beer Festival at the City Oval has attracted 4,000+ visitors each year since it started in 2012 . In January 2019 over 40 breweries, cider producers and wineries set up shop at North Gardens for the annual festivities. Soul, funk and blues performers, including Butterfunked and Christina Croft, got the braver beer drinkers dancing, while others relaxed in the shade. While pilsners and pale ales were the picks of this hot summer day, an increasing number of festival stalls were eschewing the frothy stuff for something more refreshing.

Hello Hels, I don't know how effective and advertisement this was for beer, but it sold me on the historic locale of Ballarat. Perhaps if I ever get there to explore around I can time my visit to coincide with the Ballarat Water Festival, more my speed.
--Jim

My husband belongs in the group "Men who don't trust doctors".

my absolutely favourite Victorian cities are in the centre of the state, where the 19th century gold diggers and drinkers settled. Have a look at beautiful Ballarat gold rush architecture:
https://melbourneblogger.blogspot.com/2009/05/gold-rush-architecture-ballarat.html

even the brightest and most competent of men don't always know what is good for them :)

Hello again, I just looked at your earlier Ballarat post, and it really seems a fascinating place. Northern Ohio has no significant mining activity, so although it does have its charms, there are no mining towns. Southern Ohio does have coal mines, but those tend not to inspire such magnificent buildings as the Ballarat Mining Exchange. I need to get out west to gold-mining places like Sacramento, or all the way to Australia, but honestly I wouldn't know what to visit first there!
--Jim

I loved this post. Not because I approve of advertising, but because the Victorian Bitter ad shows Australian men in such a typical, endearing way :)

no rush.... until the pandemic is 100% under control, nobody is able to fly from one country to another. Or from one state to another. So you have _plenty_ of time to think about an itinerary.

Oh, that gave me such a laugh. What a brilliant advert. Thanks for the youtube link. Loved it.

Some of the adds of the 70s 80 90s were brilliant too. I saw a program about the add men of that ear . Totally Un PC and horrifying in some respects but always funny .

The worst ads are those with a deep male didactic voice, telling us if we really loved our children, we would put all our savings into life insurance! Or we financial morons should check our hidden credit scores regularly! Instead this beer ad is funny, light, rural and partyish.

Absolutely!
For example I remember all the words of Up There Cazaly.. still. In the 1970s, it was a great ad for VFL football.

The worst ads on TV are for gambling - horses, football, greyhounds, poker machines. Every single person seems to jumping up and down with joy. There are no losers.

At the end, every gambling ad has the following, serious warning. Gamble responsibly!

There can be no advertising for smoking products on Australian TV whatsoever! But for alcohol and gambling, both the contents of the ads and the time of day the ads are broadcast... must be controlled.

Very enjoyable to watch. I had forgotten about CUBS, Cashed up Bogans and I am surprised the word manscaping was around in 2009 along with wind farms. The years pass quickly.

Yes :) I love Australian vocabulary and most Australian thinking, especially in ads because that is where they are trying to influence citizens' behaviour. Witty! Familiar!

I was very annoyed at a company that is advertising tomato sauce in Australia as catchup, ketsup, catsup or whatever else they think is trendy.

The passage of time is such a slippery concept. I was talking all week about the anti-Vietnam and pro-women protest marches of 1968-69, and I was using the present tense!!! Yet I realise that 2009 seems a long time ago for you and for most other people.

My grandfather talked passionately about the Russian Revolution as the key point in his life;
my sons would barely know when it happened.

Intrigued, I just Googled 'Australian Beer Adverts' but I haven't found your example yet (I'm sure I will, there are dozens of 'em.)
All we got was Paul Hogan advertising Fosters (Yuk!, brewed in Whitechapel), never the lovely Victoria Bitter....
Anyway, I feel like I have experienced that ad through your lovely description. I was laughing out at the thought of it- in the UK we tend to just get crude Aussie stereotypes.
CLICK HERE for Bazza’s properly propitious Blog ‘To Discover Ice’

I am assuming that the beer company's target markets were a) men and b) rural families (both of which which I noted straight away), plus c) the working class (which I didn't think of until you mentioned it). Thus the ad starred farmers, tradies and miners in working clothes, not stockbrokers in suits.

Laughter is a precious commodity, these days :)

A smart advertisement because it is not only for the commercial purposes of beer products, but also introduces the local population. This indirectly raises the area to be more famous and can become a popular tourist location.

That is so true! Not only is Ballarat a beautiful regional town that has largely protected its 19th century heritage. But the ad was based on 2000 locals as they walked down the main street of town, waving to excited viewers on both sides. The best way to help visitors get to know a new tourist destination is, of course, on foot.