Dame Barbara Cartland - her many books and men

Born in Birmingham, Barbara Cartland (1901–2000) was the oldest child of British Army Major James Cartland (died 1918); her moth­er's family were Gloucestershire minor landed gentry. Barbara had two brothers: Major Ronald Cartland, Member of Parliament and James Cartland (both died in WW2). Though she was born into upper middle class comfort, the family finances fell over af­ter her birth.

Barbara Cartland later accredited this down turn to her paternal grandfather's suicide, financier James Cartland who apparently shot himself because of bankruptcy in 1902. But James, proprietor of a brass foundry, actually left a large estate. Her father's death followed in WWI. Fortun­ately Barbara's mother opened a London dress shop to make money, and to raise her child­ren. There must have been enough money since Barbara was educated at private girls’ schools. She became success­ful as a society rep­orter after 1922, and a writer of roman­t­ic fic­t­ion, apparently influenced by Elinor Glyn’s books.

The world Cartland created was directed at a generation for whom sex was never discussed, but ironically her work in the 1920s was contro­versial for its sexual material. Her first novel, Jigsaw (1923), was a risqué society thriller that sold well. She also be­gan writing and producing slightly racy plays, including Blood Money (1926) which was banned by the Lord Chamberlain's Office. In the 1920s, Cartland was a prom­inent young hostess in London society who was noted for her beauty, charm and daring parties. Her fashion sense led her to become was one of the first clients of up-and-coming designer Norman Hartnell. 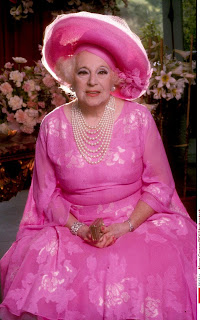 Cartland claimed to have refused dozens of marriage offers before marrying Capt Alexander McCor­qu­od­ale in 1927, Scottish Army officer and heir to a printing fortune. Their daughter, Raine McCorquodale (1929–2016), who Cartland later alleged was the daughter of 5th Duke of Sutherland OR of Prince George Duke of Kent, was intro­duced into High Society. After the McCorqu­od­­ale 1933 divorce, which charges of infidelity on both sides, Cart­land next married her first husband's cousin, Hugh McCorquodale in 1936. Cartland and her second husband had two sons: publisher Ian (1937-) and stockbroker Glen McCorquodale (1939-).

After the death of her brother Ronald Cartland, a Con­serv­at­ive Member of Parliament, Barbara Cartland published a biography of him with a preface by the Prime Minister, Winston Churchill. The war marked the beginning of a lifelong interest in civic welfare and politics for Cartland, who served the War Office in various charitable capacities as well as the St John Ambulance Brigade. At Buckingham Palace in 1953, she was awarded the Commander of the Order of St John of Jerusalem for her services.

During the 1950s she campaigned successfully for nursing home re­form, improvement in the salaries of midwives and legal­isation re education for Gypsy children. To me she unexpectedly became a champion of the Romanies' rights.

Cartland kept a long friendship with Lord Mountbatten of Burma. This significant royal man supported Cartland with her a number of her foundations and he helped with some of her novels, providing the back­ground naval and historical information that she needed. 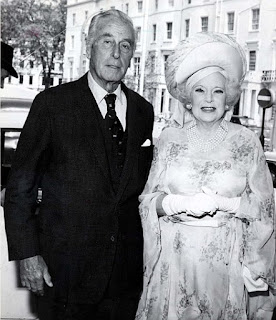 In 1950, Cartland was accused of plagiarism by author Georgette Heyer, after a reader drew attention to the apparent borrowing of Heyer's character names, dialogue, personalities and plot points in Cartland's early historical romances. In particular, A Hazard of Hearts (1949), which apparently replicated characters from two Heyer books. Heyer analysed the alleged plagiarisms for her sol­ic­itors in detail, but the court case stalled.

As well as novels, Cartland wrote a guide to married life in 1962. Called A Guide to Good Behaviour from the Boudoir to the Boardroom, this book was banned in Ireland! Her image as a self-proclaimed expert on romance drew crit­icism in her later years, when her social views were even more cons­ervative. Indeed, although her first novels were called sens­at­ion­al, Cartland's later titles were comparatively tame with virginal heroines. Almost all of Cartland's later books were historical in theme, so chastity seemed appropriate.

Despite her docile storylines, her later novels were very succ­ess­ful. In 1976 Cartland wrote 23 novels, winning the Guin­ness World Record for the most novels written in a year. By 1983 she was named the world’s top-selling author by the Guin­ness Book of Records.

This Queen of Romance became very successful in the 1970s and 1980s; she regularly appeared on television, looking distinctive in her iconic pink silk dresses and smiling. Her white hair was like puffy clouds, and her heavy, false eye lashes made her lids droop. She discuss­ed love, marr­iage, pol­it­ics, relig­ion, health and fashion. And she spoke against infidel­ity and divorce. 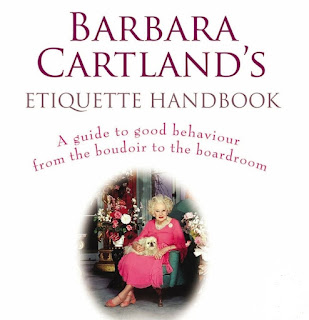 A Guide to Good Behaviour from the Boudoir to the Boardroom,
written by Barbara Cartland in 1962

But from 1960 on, when my Australian English teachers were encour­aging us in essays, journal articles, books and letters, Barbara Cart­land was NEVER offered up as a role model. Penelope Fitz­gerald, Bruce Chatwin, AS Byatt, George Orwell, Graham Greene, Alan Sill­it­oe, Kingsley Amis, Anthony Powell, PD James, Penelope Lively, Sylvia Plath, Muriel Spark and many others, yes! Cartland no! Her prose, dedicated to an unlikely celebration of the advent­ures of passionate virgins, had little appeal to us Baby Boomers.

Hello Hels, Mostly when I have heard of Barbara Cartland, it was people ridiculing her books, which don't seem my type anyway. Her etiquette book sounds interesting--I wonder if it was practical or stuffy. After all, in the 1960's, especially in Britain, there was still the old contingent of formality, and aristocrats were ambient, so perhaps it was important to know whether an earl preceded a duke. Her life story seems dramatic enough to have provided inspiration for her novels.
--Jim

I didn't like her writing either, yet she sold 700 books to millions of readers.

I had imagined that Dame Barbara had targeted an English speaking audience, both because her language might have been difficult to translate well, and because her content was (as you say) so specifically aristocratic and formal. But her sales in 40 countries topped 500 million! In fact when she was presented in 1988 with the Gold Medal of Paris for having sold 25 million books in France, the night sky over the Eiffel Tower was lit up with Cartland’s initials in pink fireworks.

Cartland's own home page said: in her lifetime, she wrote an incredible 723 books, including 160 unpublished manuscripts which have been posthumously published as her Pink Collection. Despite the evolution of the romance genre, Dame Barbara’s glorious tales of spellbinding adventure, thrilling suspense and the triumph of love over every adversity have enjoyed a massive resurgence in popularity. Her much-loved books continue to attract many fans around the world.

Clearly she was right and I was wrong, as were you :)

As a young man, seeing her on television, I disliked her. She was the most self-centred person I had ever seen; the Zsa Zsa Gabor of romantic fiction! Sadly, she became a figure of fun and ridicule, to which she seemed to be impervious.
CLICK HERE for Bazza’s coyly contumacious Blog ‘To Discover Ice’

I thought exactly that too! But it didn't matter that she was a figure of ridicule to part of the reading public. Barbara Cartland was averaging 23 books each year by the 1970s, and making money hand over fist. She was laughing all the way to the bank.

On the other hand, I exhausted myself writing 3 lots of lecture notes a week. And even that was largely by updating my old lecture notes :)

HI Hels - I didn't pay much attention to her, or her books ... but picked up the odd bit of gossip back in the day. She was an interesting character ... and I see you're going to write on her daughter next together with Lady Di - that to me is a heart warming story - which puts 'dear Babs' in a better light. We see the press layer and that's it ... but she was an astute lady. Take care - Hilary

I must admit I've never read any of her books. I don't think I ever saw her in anything that wasn't pink.

She really was the June Daley Watkins or Doris Day of the writing ( not literature) world . All about appearances and about as deep as a puddle . Well that view of life and relationships rarely works for very long I find. That sort of finishing school carry on is just awful . What is interesting though is that she obviously saw fit to sell the lie about romance and sex to a population of women who wanted to believe that this was how the upper classes lived and what they should aspire to but when looking at her life this wasn't at all true for her . A bit like the "moral Victorians " presiding over the most drunkenness, worst slums and most active sex industry in British history .I will say though that she had chutzpah!

I've never read any of her novels, either, but I'm intrigued that her 20s works were so controversial and might try to seek one or two out now. By the time she came onto my radar, she was the object of ridicule that has been mentioned above. The reputations of successful past authors really came in for a drubbing in the 70s and beyond. Iconoclasm only leading to others being put atop those pedestals for today, really. When I read your list of school-sanctioned authors I do have to roll my eyes. The home lives of some of them were no better or worse than those who were scrubbed from reading lists and the quality of the writing just as questionable.

Barbara Cartland was mega talented!! In 1983, she was named the world’s top-selling author by the Guin­ness Book of Records.

*nod* pink was sooo symbolic for femininity after WW2, as were dolls for little girls and no jewellery for males. So Barbara Cartland was very smart, having ALL her photos and paintings in total pink, furs, diamonds, pearls etc later in her life.

My mother was a risk-taker in the 1950s, never giving me pink clothes or dolls :)

I only know her from her pink clothing and that she wrote romance novels, although I do have some recollection of her conservatism. But, she certainly was a high achiever in life and contributed well to society.

whole generations used to tell their daughters this story (not lie) about romance and sex. They spoke to a population of women who wanted to duplicate how the upper classes lived and what middle class women could aspire too. Parents, the church, teachers and women's magazine all shared the one perspective, it would seem.

I agree that Moral Victorians had a definite part to play in Cartland's books. Many of her novels had relevant historical settings.

oops I should have said that history changes our views on good and bad literature, just as our views change about music, paintings, architecture and every other area of human endeavour. Agatha Christie, for example, couldn't get her early novels published for love or money. El Greco was arguably the most famous artist in Western Europe but died unknown, impoverished and thrown in a mass pit.

you were probably never given a Cartland novel to read.. I cannot remember that men ever were. It is interesting, thought, that her heroes were mostly courageous and honourable men, and the heroines were always moral young ladies barely out of their teens.