I have selected my best recommendations from Reading's Summer Reading List and one from History Today.

LOVE IS BLIND by Scottish author William Boyd. The book has finely wrought characters and wonderful evocations of place; the action, which centres around Scottish piano-tuner and a Russian opera sing­er, involves diverse characters and travels from Scotland to Paris, Nice, St Petersburg, Trieste and Biarritz. Their love traps them in a mad­d­ening cycle of strange unhappiness and ill health.

UNSHELTERED. Barbara Kingsolver’s book is an intricately imagined book about a world that we keep fouling through ignorance, greed or incompet­ence. Kingsolver’s dual narrat­ive focuses on two families, one in the C19th and the other in the present day, who live in the same derelict house in Vineland New Jersey. Originally established as a utopian community, Vineland is far from utopian today.

AN OPEN BOOK. This new collection of poems, mostly unpublished, will captivate David Malouf’s many readers. An Open Book offers new rev­el­ations on themes that have gripped the author throughout his long and celebrated career, including memory and morality. Malouf’s com­mand of language and keen observational pow­ers shine through. With a smattering of sparse details, he transforms the ordinary into the extraordinary. 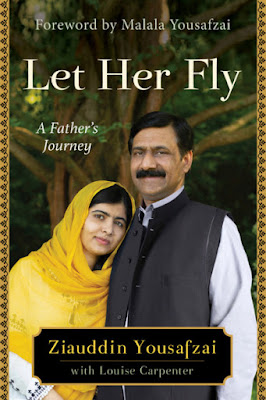 Let Her Fly by Ziauddin Yousafzai

LET HER FLY. Ziauddin Yousafzai, the Pakistani activist for girls’ education shot by the Taliban in 2012 and awarded the 2014 Nobel Peace Prize, wrote her own story but this book is her fath­er’s. Ziauddin Yousafzai was himself a principled activist, fight­ing for equal education and determined to challenge the patriarchal society, both before and after the Taliban’s arrival in Pakistan. Here he discusses his personal beliefs about gender equity, family and human kindness, and his amazing daughter.

MAD, BAD, DANGEROUS TO KNOW by Colm Tóibín. Joyce, Wilde and Yeats are 3 of the most famous men in Irish literary history. All 3 led lives that were unconventional or risqué, raised by troubled fathers. William Wilde was a very successful medical practitioner who became embroiled in a very public court case. John Joyce was a drunk who could not manage money, and drove his fam­ily away. John Butler Yeats was a talented artist who died alone in a New York boarding house. Tóibín tells how the writers’ fathers affected their art.

BELONGING. Historian Simon Schama blends cultural history with vibrant family stories to present his Volume 2 of the history of the Jews. Beginning with the expulsion from Spain in 1492, meet rabbis, philosophers, a Venetian poetess and a Ming China general. Travel to the hills of Galilee, rivers of Colombia, kitchens of Istanbul in caravels, stage-coaches and railways.

NEW JERUSALEM Australian historian Paul Ham recounts the horrifying history of New Jerusalem, the C16th community of the radical Ana­baptist sect who were God’s Elect. In 1534 these Melch­iorites seiz­ed the European city of Munster, exp­elled Cath­olics and Lutherans, and ushered in new laws on polygamy, trial by fire and a system of shared property. Their new home soon faced a long and brutal siege when they were shut off from the world, attacked and slowly starv­ed. Their revolt was one of the first of the Reformation. 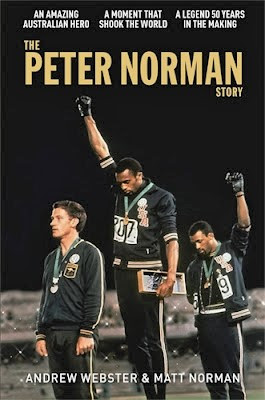 THE FIFTH RISK. Michael Lewis takes readers into the trenches of government. He shows how three unglamorous but critically imp­ort­ant US federal departments (Energy, Agriculture, Commerce) have been systematically derailed by the Trump admin­istration. While bureau­cracy doesn’t normally inspire passion, Lewis has a remarkable gift for spinning complicated stories into riv­eting page-turners. The horror of this book is in the impacts of Trump’s ignorance and lack of leadership.

21 LESSONS FOR THE 21ST CENTURY. Yuval Noah Harari identifies the 21 most important chall­en­ges in the modern world: technological shifts, place of liberalism in our political landscape, and role of humans and corporations in build­ing a good future. This book takes a researched view of history and culture, and paints an acc­es­sible, shock­ing and darkly humorous portrait of our challeng­es. It emp­owers readers to find meaning in a world of rapid charge.

THE PETER NORMAN STORY At the 1968 Olympics, two Black American athletes, John Carlos & Tommie Smith, famously stood at the podium and gave a black power salute. Peter Norman was the third man, standing in solidarity with Carlos & Smith. While the photograph of these runners on the podium is one of the most famous of the C20th, upon Norman’s return to Australia, his life began a downward spiral. Authors Andrew Webster & Matt Norman follow Norm­an’s life from his childhood growing up in a devout Salvation Army family in Melbourne, becoming one of Australia’s fastest sprinters. The riveting story shows was poorly he was treated by his country.

THE WESTERN FRONT DIARIES OF CHARLES BEAN by Peter Burness (ed) As WW1 started, the British government invited Australia to nominate an official war correspondent. After being dispatched to Gallipoli, Charles Bean dedicated his life to chronicling and understanding Australia in wartime. A century later, his legacy is honoured with this publication of his diaries, coloured pictures of documents, paintings of soldiers, maps and travelling ephemera. Bean’s stories chronicle the Australian war experience, via soldiers, military leaders and politicians. Describing the burgeoning identity of a nation, the book reflects on the legacy of war.

Paul Lay, author of Providence Lost: the Rise and Fall of Crom­well’s Protectorate, loved  Marion Turner’s vital new biog­raphy Chaucer: A European Life (Princeton). He journeys through the places and spaces of his life, from London’s waterfront to the snowy, multicultural kingdom of Navarre and the great Italian city states of Genoa and Florence. It is at once a vivid reconstruction of Chaucer’s C14th world and a revelatory exploration of his poems. And a sense of place suffuses Suzannah Lipscomb’s The Voices of Nîmes, Oxford. Look at the every­day lives of 16th and C17th women at a time of social and religious turbulence.

I read I Am Malala a couple of years ago and thought Malala Yousafzai was a very mature young woman. Ziauddin Yousafzai may be worth pursuing as well.

Hello Hels, Some of these books look possible, but I find my greatest satisfaction in older books. I recently finished the complete works of Congreve. Although he was just reaching his peak when he stopped writing, his plays still make remarkable reading. Right now I am immersed in The Victorian Kitchen Garden, the companion book to the BBC TV series, and a book of E.M. Forster's essays and miscellaneous pieces, which started off a little stuffy, but I am discovering many gems in it.
--Jim

Malala Yousafzai must have been a very special teenager, to survive the catastrophe that almost happened to her. And she must be brave still, to continue the battle for women's equality. If you do read LET HER FLY, please drop me a line at this blog post.

I too used to read old books, by which I mean 19th century or early 20th century. But over the last 20 years, I have barely opened a novel *blush*. I have read as many academic journals, text books and non-fiction as anyone, but good fiction (even during coronavirus) improves our minds.

Hi Hels - thanks for these suggestions ... I've noted - and some I definitely want to read ... just so many here to read first. I would like to read the Schama one ... it's part of history I'm very poor on. The Fifth Risk sounds interesting ... and I'd love to read the 21 LESSONS FOR THE 21ST CENTURY by Yuval Noah Harari. I've been reading some books by David Olusoga about our black history in various ways. Great ideas you've given us - thank you ... take care - Hilary

I love Schama's writing and lectures. He is one of the few I know who can be scholarly and fascinating at the same time. "Belonging" seems to cover half the globe... over hundreds of years.

It is a good list and some are on my list to read. You get through quite a number of books!

The list was created by the bookshop's experts, not by me. But I have to agree that Kingsolver, Schama and Malouf are three of my very favourite authors, bless their hearts.

Also I did read the Peter Norman Story, and found it very moving. See my review of the book in this blog, Feb 2019. If you do read it, let me know what you think.

I have always relied on suggested reading lists from quality sources, nod.

Fooddy Blog shows how to make simple dishes so that you can make delicious food for your family. Share your knowledge about cooking.Fooddy

I wonder if any of the recommended reading lists included books on cooking or nutrition. I imagine they are very popular topics.

Thanks for that lovely list Hels: There are one or two that I've had in my sights for a while.
During lockdown I have made a point of going through my extensive collection of books to seek out several books that I started and just couldn't 'get into'. So far I have read, and thoroughly enjoyed, London Fields by Martin Amis, The Secret History by Donna Tartt, A Distant Mirror by Barbara Tuchman (one of the best history books I have ever encountered) and Alain de Botton's How Proust Can Change Your Life. All thoroughly recommended!
CLICK HERE for Bazza’s excessively effulgent Blog ‘To Discover Ice’

PS: Forgot to say that I hope you and your family are doing OK in the new lockdown!

I agree that going through your own library is just about as productive as going through a suggested reading list by history experts. When we went into lockdown the first time, I took the opportunity to clear the library of books I hadn't used since 2000 - 20 crates full. Some I sold, but some I was delighted to re-read again. Including the excellent A Distant Mirror: The Calamitous 14th Century by Barbara Tuchman :)

The new lockdown is horrible. Our gardener depends on a group of families for his income, and he is no longer allowed to work :(

Our gardener can get into our rear garden via a side-entrance so has still been working. He's a bit of a character, about 80 years old with a long grey pony-tail and he bring's his young 'friend' with him!

Have a look at another fascinating reading list by streetsofsalem:
https://streetsofsalem.com/2020/08/04/summer-2020-reading-list-what-i-would-have-read/

The only book that I already knew and enjoyed was Invisible Agents: Women and Espionage in Seventeenth-Century Britain, by Nadine Akkerman