I am not a royalist so it may have seemed strange watching Channel 4’s documentary Princess Diana’s Wick­ed Step-mother. This film, about Raine Spencer (1929-2016) and her relationship with the Princess of Wales, featured an in-depth in­sight into Raine’s life, and inter­views with the countess’ friends and staff members.

Raine McCorquodale was born in Newbury Berkshire in 1929, only child of romance novelist Barbara Cartland and army officer Alex­ander McCorquodale. Raine became an immaculately dressed figure at an early age, and after the war at 18, she was a leading debut­ante in Lond­on’s high society. A year later, in 1948, she married Gerald Legge future Earl of Dartmouth.

The new wife was determined to have a more creative life than being just a housewife looking after children. So in 1954 she stood as a Conservative councillor in London. At 23, Raine began in the St George’s Ward in Knightsbridge, the youngest member ever in the West­minster City Council. While Raine was largely known as a soc­ial­ite within London’s high society, she had also embark­ed upon a career in politics at an early age.

Raine had ambitions to become an MP, attempting to become the Con­servative candidate for Richmond in 1966. Instead in 1967 she was elected to the Greater London Council as councillor where she ran a successful campaign against plans to redev­el­op the Tate Gallery and the National Portrait Gallery. She was also a key figure in prev­ent­ing a disastrous redevelopment plan for Covent Garden. By 1972, Lady Dartmouth resigned from the Greater London Council, although she continued to work on public bodies like the English Tourist Board and the Victoria and Albert Museum. 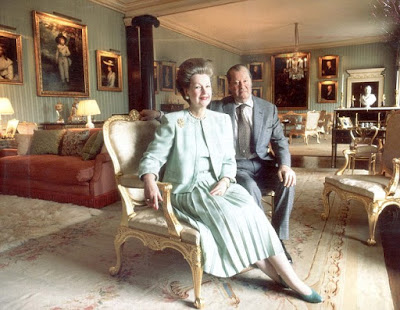 In 1973, while having been married for 25 years of marriage to the Earl of Dartmouth, Raine embarked on a relationship with future earl John Spencer, having met him on an architectural heritage committee. Three years passed until Raine divorced her first husband and married Spencer. He had already div­orc­ed Diana’s mother Frances who, also in 1976, married wallpaper heir Peter Shand Kydd. Naturally the Spencers’ actions frequently caused mention in the British and foreign press, and not always pleasantly.

The newly married Countess Raine Spencer immediately moved into Althorp in Northamps, the family seat of Earl Spencer.  Architect Henry Holland made extensive changes to modernise Althorp from 1788 on, and the grand hall entrance to the house was described as the noblest Georgian room in the county. By 1976 Althorp presented Raine with a long term and serious renov­at­ion project. She was badly criticised for her taste, but husband supported her all the way. As expected, the step­children greatly disliked Raine. 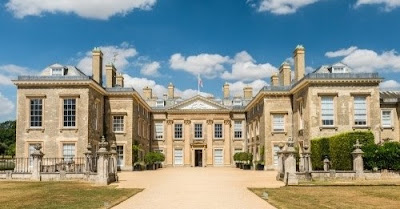 Althorp Park, Northamps
Was the home of the young Diana Spencer
Later the home of Earl and Countess Spencer

In 1978 Earl Spencer suffered a brain haemorrhage. His rec­overy was slow and risky, but he totally cred­ited his survival to Raine’s close and loving attention.

In the months before & after the 1981 wedding of Princess Diana and Prince Charles, the media followed both royal spouses and analysed every aspect of the couple’s lives. Particular focus was placed upon the young teenage girl. As we increasingly read in the newspapers back then, the quality of Diana’s relationship with Prince Charles were not as tender as she hoped. None­theless, years later when she experien­ced the miseries of divorce first-hand, it was the stepmother she had previously disliked who clearly was becoming the trusted friend.

In 1992, Lord Spencer the 8th Earl passed away at 68, having suffer­ed a heart at­t­ack. Diana was bereft. Charles the 9th Earl simply insisted Raine mov­­­ed out of Althorp immediately after her husband’s funeral. And so she did.

Raine married a third time, to the French Count Jean-Francois de Chambrun. When Raine divorced this husband, three years later, she decided to revert back to her Countess Spencer title. Three marriages, three times an aristocrat! Remember that aristocracy was something mum Barbara Cartland had never achieved.

In 1996, the owner of the very classy Harrods shop, Mohamed al Fay­ed, appointed Raine a director of Harrods International. She loved the job, and loved dealing with the customers. Then she acted as a roving ambassador, and she spent some time at the company’s airport properties too. Plus there were trips to China, Russia, Monaco and Egypt. [Visitors to Harrods can visit Raine’s lasting connection to the Spencers for themselves. Note that her cash register in the basement was only 100 metres from the shop’s recent memorial to Diana and Mohamed’s son Dodi Al-Fayed]. 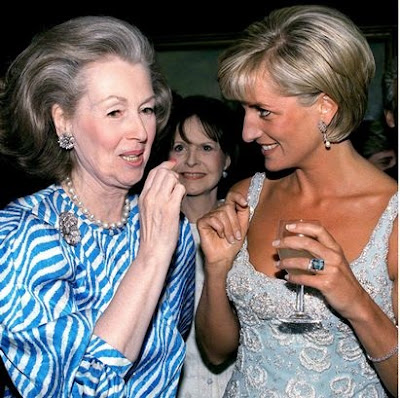 In the five years before Diana’s horrible death in 1997, the prin­cess and her stepmother formed a close bond. Perhaps with Diana’s own imminent divorce, she found herself treated very badly by the Royal Family, much like Raine had been with the Spencers. In the book The Queen and Di: The Untold Story (2000), Ingrid Seward des­cribed how the two women had regular lunches together and spoke on the telephone daily. Raine became Diana’s most trusted confidante dur­ing a very tough time in the Royal Family.

I think if I asked anyone if they knew Barbara Cartland's daughter was Princess Di's mother in law, they would say no, just as I would. Or maybe we have forgotten the lives of the rich and famous back then.

Charles the 9th Earl was an insensitive bugger to both his step mother, when she was a widow, and his sister, once she needed a home. An aristocrat but not a nice human being.

step-mother rather than mother-in-law, but yes, the links and interlinks were amazing. There were a lot of royal families and noble families across Europe, but eventually princes and princesses had fewer and fewer families to marry into. That reminds me: King George V of Great Britain, Tsar Nicholas II of Russia and the German Kaiser were (identical looking) cousins.

Clearly being rich and famous did not always make a family happy.

I knew that Charles the 9th Earl threw his unloved step mother Raine out of Althorp, immediately after her husband’s funeral. Tough man :(

But I had no idea that Princess Diana was looking for safe haven in her family home at Althorp when her brother Charles rejected her pleas. In 1996 the Daily Mail said a desperate Diana merely wanted a Garden House to use as a bolt-hole. Cruel man :(

Hello Hels, Some strong and talented people can be hard to get along with. Raine seemed to be an intelligent person with strong ambitions, perhaps problematic in an era that expected all women and especially mothers to be "warm and fuzzy." This Charles, on the other hand, seems like an inexcusably nasty piece of goods.
--Jim

We have all come across both moral and immoral behaviours in royal and noble families in every generation! In every country! Which only goes to prove that giving our children top class educations and attractive real estate does not guarantee that they will give back to the community when they can.

But there was another issue that still stuns and amazes me - total secrecy. How is it that, until Edward Prince of Wales publicly announced in Dec 1936 his abdication and his plan to marry a multiple divorcee, newspapers were successfully banned from leaking any information about royals?

Well I did know all that about Raine except fro her life in politics . I had never imagined that she had done anything useful with her life at all. That I think says quite a lot about me and my judgement of a woman with Helmet Hair !!! :( I am amazed that she had a good relationship with Dianna in the end because I always saw her painted as the nasty stepmother .Stepmothers have often gotten a bad wrap probably undeservedly in most cases. Well Charles the 9 the earl appears to be quite a narcissistic person judging from the pretty insensitive comments made at her funeral to a world wide audience but more specifically to her 2 sons who were part of both families. I always found that pretty unforgivable but I guess the Spencer Children all seemed to suffered from self absorption in their parents .

I studied British history at school and at uni for years, and I sort of understand views and behaviours that we would never tolerate today eg slavery, exploitation of colonies etc. But I will never ever understand why royals treated _their own_ so appallingly. And not just King Henry VIII.

Why did King George V not save all of his beloved cousin Russian Tsar Nicholas II's children from being machine gunned? How could Queen Victoria force her schoolboy grandson Charles Edward to exile, alone, in Germany? Why was Princess Margaret forbidden from marrying the divorced Captain Peter Townsend, even though she was a very long way from the throne? etc etc etc

Yes Hels . There is nothing that corrupts human compassion and kindness than a drive to preserve an institution , in this case the monarchy . In George Pell's case it was the Catholic Church . The irony is that the church is the people NOT thee buildings and the hierarchy of the Papacy etc . In the case of monarchy its the price that is exacted by the people from the monarch for their amazing wealth . Its why the public have always felt a right to know the most intimate of details about the royal family . This was physically acted out in The public dressing of the monarch and the public eating of meals at Versailles. When this was disagreed with by the monarch and his or her family , resentment grew and off with heir head as in Marie Antoinette and her craving the privacy of the Petit Triannon at Versailles .
at the moment The younger Royals are acting out against this unspoken pact with thee Meghan and Harry debacle . I do think that the Royals who are born into it do "get it" and hence their attitude to Dianna, Fergie and now Meghan is one of annoyance and criticism when perhaps a better one would be one of compassion and kindness along with some history lessons preferably before the engagement is announced.

Yes!! The drive to preserve an institution must have been, and continues to be, very strong. When the dreaded Governor General closed down our Parliament in 1975, the royal family went silent until now, 2020. Illegal, anti-democratic and totally covered up :(

Hi Hels - we just don't know ... but I'm glad Princess Di and her MIL seemed to get along at the end. I was going to go to Althorp this summer ... well now it'll be next year - I've friends up there ... take care - Hilary

Stately homes and their collections tell us a great deal about the aspirations of the families who lived there. Good on you for visiting Althorp.