A crucial commission in the mid-1640s for the Franciscan monastery in Seville established Bartolomé Esteban Murillo’s reputation, to the extent that Murillo displaced Zurbaran as the key Seville painter and ran a thriving workshop in the city.

In 1646-52, the bubonic plague hit Seville. The city had warning and could have gone into lockdown earlier, like nearby Cádiz. But whet­her through economic need or negligence, Spain’s largest city rem­ained open for business. Within a year, a quarter of the population had died and many others fled the city. Floods and famine compound­ed the crisis, and it was clear that God was punish­ing Sev­il­le. But from calamity came opportunity. As penance, merchants deploy­ed their vast wealth for the glorification of God. Murillo gained.

Alongside Murillo’s many grand commissions for churches and cath­ed­rals was an intimate narrative cycle of paintings depicting the Parable of the Prodigal Son. The story in Luke told the tale of a wilful younger son who demanded and Received His Por­t­ion of Inher­it­ance and left home to live a life of luxury. He squandered it all and was reduced to working as a swineherd in a bitter famine. Alone and hungry, he understood his folly and returned to his father to beg for work and forgiveness. Despite the resentment of his older, more obedient brother, his father welcomed him back with open  arms. 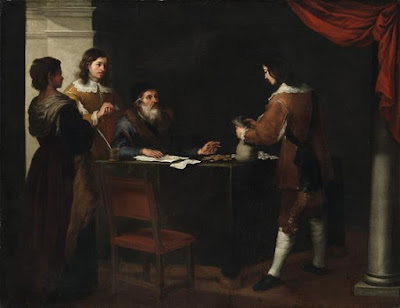 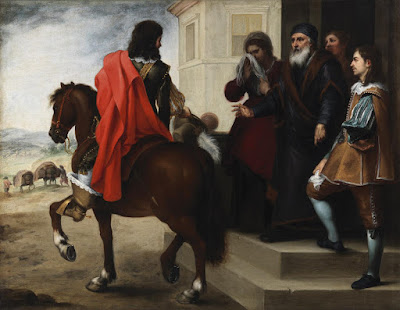 The tale of suffering, repentance and forgiveness clearly appealed to a Seville-based patron in the pandemic. While the subject was al­­ready popular in northern Europe, this series was the first of its kind in Spain. Yet the 6 important works long languished in relative obscurity. After an 8-year restoration campaign, fin­ally see the results in an exhib­ition at the National Gallery of Ireland, until late Aug 2020.

The paintings were lit to reveal Murillo’s signature vaporous brushwork and vibrant palette. The display was intimate, reflecting the likely setting of the works in the house of an unknown patron. Note the contextual mat­er­ial, especially Jacques Callot’s engrav­ings from 1635, which Murillo reinterpreted for some of his works.

The artist set the story in C17th Andalusia, and the unknown patron would have seen much he recognised. The elegantly dressed prodigal in The Prodigal Son Feasting closely resembled those New World heirs who spent lavishly in the brothels and bars of Seville. 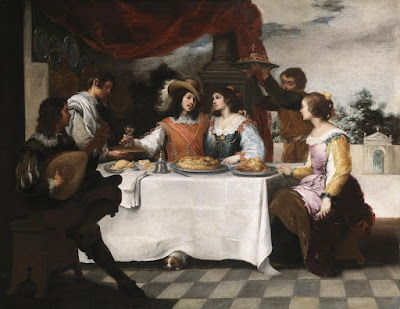 See The Prodigal Son Driven Out. The man, impoverished and clothes in tatters, was cast out of a brothel. The furious court­esans wielded brooms and pikes, and the wizened madame cursed him from the doorway. While rare in art, the prodigal son story was a firm favourite among Spanish Golden Age playwrights. 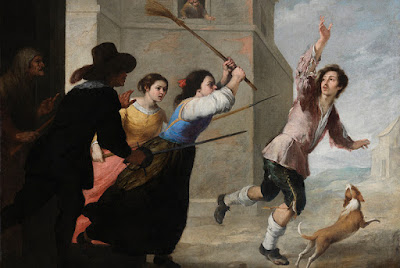 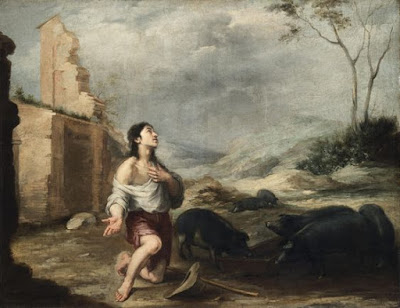 Hunger reigned and the barefooted wretch in The Prod­igal Son Feeding Swine, an imagine of gloom and desolation that would have been a common enough sight during and after the plague.
The conservation work, according to the experts, was a great success. Much of Murillo’s fine sfumato and fluid brushwork remained intact. Technical analys­is has uncovered a significant pentimento in Feed­ing Swine. Behind the son’s head, Murillo had painted a ruined cas­tle. Its ominous pres­ence filled the horizon, but Murillo clearly didn’t care for it and opted instead for a desolate landscape. Such a major alteration was unusual for the artist, and the exhibition illustrated this by including a full-size display of the X-rays.

In fact the entire cycle was a morality play in oil, each scene com­ing together to reveal the story and the folly of the pro­digal’s actions. Early in the paintings’ history the final scene, The Return of the Prodigal Son, was separated from the group. When the Earl of Dudley bought the other five for a fortune, he was det­erm­ined to reunite them. Un­for­tun­ately for him, the missing picture had been acquired by Queen Isab­ella II who in 1856 presented it to Pope Pius IX. 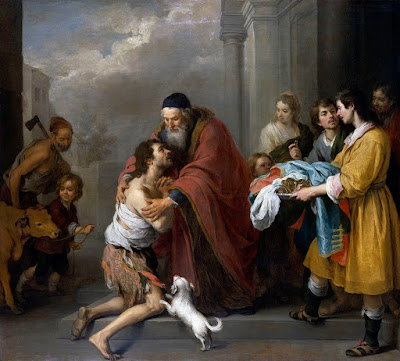 Murillo’s cycle ended in the tearful return of the prodigal. Mur­il­lo may have chosen to emphasise the charitable aspect of the par­able because of the nature of the commission during an active pan­demic. The Return of the Pro­digal Son was one of the huge canvases paint­ed for the Church of the Hospital of Saint George in Seville, a hospice for the home­less and hungry. Murillo's model was the life around him; part of the appeal of this canvas lay in its human touches, even in terrible times.

The National Gallery of Ireland concluded: The series started when Murillo’s style had quite softened from its early stages. One of the founders of the Spanish Academy of painting, Murillo init­ially used Zurb­ar­an’s dark Caravaggesque art. Murillo's great talent for dramatic painting was apparent in this monumental Pro­digal Son series, an allegory of repentance and divine forgive­ness. And to underscore the drama, the images were reminiscent of a well-staged theatre piece. So what is the connection with the current coronavirus pandemic? The parable of the Prodigal Son was a cure for despair. The story could bring a spark of light to the imp­ris­oned criminals, for after their period of feeding the swine, they could live a new life in the love of Christ. Presumably, so could we moderns.


All images are from the National Gallery Ireland, Dublin.

THE PM said today that the world had never suffered such a medical catastrophe as our current pandemic. Earlier generations would say that was absurd, including the 17th century Spaniards.

Hello Hels, Kudos to this beautiful exhibition and the work behind it. People have always been willing to re-accept those who left in disgrace; the only difference seems to be that in earlier times some of the miscreant at least showed a little remorse. Today's politicians are prodigal with our money, then we re-elect them and they waste the rest of it.
--Jim

Hi Hels - interesting to see the six paintings here ... and to read their intent in 17thC Spain when an earlier pandemic happened. I'd love to see more about the restoration work ... and for me there's lots more to learn - take care - Hilary

I think the importance of Spanish painters has often been overlooked in favour of their French counterparts but the French were often influenced by and in awe of the Spanish. The Spaniards all seemed to have great technical skill although it's fair to say that the French were more adventurous and pushed the boundaries further (until Picasso arrived!). Generally speaking, despite anything else, Murillo's paintings are always a joy to look at.
CLICK HERE for Bazza’s laughingly luminous Blog ‘To Discover Ice’

We seem to be incapable of truly understanding the pain of other nations and during other eras. Yes we have sad losses in aged care homes, and unemployment is increasing each month, but we have always had the technologies to stop the spread of the virus and hopefully we will have a Covid 19 vaccine in the near future.

In Seville they knew their children would either die from the plague or would die from starvation. Only repentance and glorification of God could save people from despair.

the exhibition is perfectly presented, both time wise and location wise. But not having a Catholic background myself, I had to carefully read the paintings and the analyses of the paintings over and over. Remorse and reunification in love were important to Murillo, and to each other family he was appealing to.

I would have loved to have spent some time on the restorations, but fortunately for us, the process has been well documented by the National Gallery of Ireland. Read how these paintings survived brushes with criminal gangs in Ireland:

I am so glad you said that. When I was doing my Art History major (a long time ago), British, French and Italian art subjects were compulsory but Australian, Spanish, German, Russian and Dutch art subjects were optional. I loved Murillo of course, but also Diego Velázquez, José de Ribera and Francisco Zurbarán. Only Francisco Goya was a bit difficult.

Thanks for this fine post. I was unaware of Murillo's sequence and really appreciate your comments. The Prodigal Son is probably the most famous story in all literature. I don't think you have to be a Catholic to understand its meaning. The young man took his great inheritance to a foreign country and instead of converting them, he was converted by them to his own degradation. The first step in recovery is to admit your guilt and then beg those you have wronged for forgiveness.

The story of the Prodigal Son is a great story in its own right, especially in its connection to forgiveness. As God was seen to be punishing Seville for its wickedness with the plague, floods and starvation, the citizens would have been desperate for forgiveness. Murillo was great, wasn't he?

It is a great story and one that I am sure would be duplicated across many religions and cultures because it speaks to poor impulse control, sense of entitlement , the notion that being virtuous doesn't necessarily bring you great rewards ( The other son who did the right thing and yet his father is delighted by the return of the prodigal, must have been gutted and felt that it just wasn't fair!! ) . All these are universal human emotions and conditions. They are wonderful paintings and thank you so much fro writing about them .

All these were universal human emotions and conditions, yes. I imagine that people were desperate for redemption, mainly because the normal responses to fatal plagues (medicine or magic) had failed. On God's part, redemption was the acceptance of satisfactory amends whereby the Divine honour was repaired and the Divine wrath appeased. On man's part, it was a deliverance from the slavery of sin and a restoration to the former Divine adoption (newadvent).