August Lindbergh (1859–1924) was born in Sweden & left for the USA early in life. As a teen, his son Charles Lindbergh (1902-74) loved machines, esp­ecially the family’s Model T Ford. And The Spirit of St Louis. People knew that from birth on, Charles Lindbergh had had diff­iculty connecting with humans. But while his obsessive love of mach­ines caused him to be a problematic husband later on, it was precise­ly what he needed to grab a spot in the history books.

Charles studied mech­an­ical engineering at Wisconsin Uni before pursuing a career in fly­ing. Then the heroic aviator became world famous for the first solo trans­atlantic ­plane flight, New York-Paris, in 1927. This daring flight was 33.5 hours in the air.

Lindbergh and the Spirit of St. Louis
on Long Island, mid-May 1927

After his daring feat, large crowds excitedly cheered Lindbergh wherever he went. Especially when he married Anne Morrow (1906-2001) in 1929!


The Charles Lindbergh House and Museum MN presented the following information. In Jun 1930 the Lindberghs welcomed their first son, named Charles Augustus Lindbergh Jr. Requests for photographs quickly came in from the press and admiration flow­ed from the public. The Lindberghs were building a house in a rem­ote area near Hopewell, New Jersey when the baby was stolen from his bedroom in 1932; the Lindberghs and their staff were inside the house, awake. A ransom note and brok­en ladd­er propped against the outside wall were dis­cov­ered, and over the next few weeks many letters and tips poured in.

The Lindberghs paid $50,000 in ransom, through contacts, to a man claiming to have information about the baby. 10 weeks after the kidnapping, the body of a toddler was found partially buried in the woods near the Lindbergh home.

With no leads, the case went cold. But two years later one of the ransom bills surfaced, leading investigators to indict German immigrant Bruno Hauptmann with extortion and murder. Haup­t­mann’s trial begin in Jan 1935 and quickly became the Trial of the Century. The ransom go-between, John Condon, identified Hauptmann as the man to whom he paid the ransom and other crucial testimony came from scientists. Hauptmann took the stand and continued to profess his inn­oc­ence but the jury found him guilty of first degree mur­der and he was executed at a New Jer­sey prison
in Apr 1936.
. 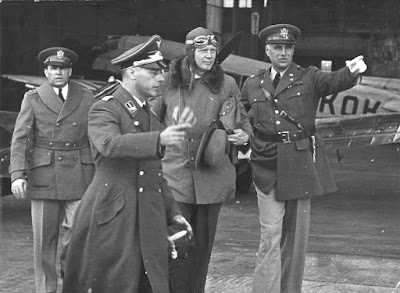 Charles Lindbergh (in goggles) and German officers during one of his visits to Germany.
YALE

The period had been an agony for the Lindberghs. To escape the constant media attention in the USA, the couple moved abroad, living in Britain & then France.

In the late 1930s the US govern­ment asked Lindbergh to tour the German flying fleet and report back. So he made four visits to Germany to report on the Luftwaffe for the US mil­it­ary, and expressed his admir­at­ion for German’s aircraft tech­nology. In 1941, Lindberg strongly re­com­m­ended that the US negotiate a neutrality pact with Hitler, acc­using the Jewish race of being behind the drive for Am­erica to enter WW2. Post-war, his popular reputation at home diminished, cast as an anti-Semite and Nazi sympathiser.

Yet post-war Charles still served as a con­sult­ant to the US Air Force and to Pan American World Airways, and trav­elled often. In 1957, middle aged Lindbergh met and fell in love with Brigitte Hess­haim­er, a 31-year-old German hat-maker living in Munich. They began a long-term affair that only ended with his death in 1974. Although Lindbergh visited Brigitte 2-3 times a year, introd­ucing himself to his children with a fake name, they kept their relat­ionship a total secret.

Lindbergh was also involved in secret long-term relationships with Hesshaimer’s sister Marietta, and Valeska, Lindbergh’s German tran­slator and private secretary in Baden-Baden. He had two children with each of these women, again keeping the families secret.

Although Lindbergh did not live in Germany, he regularly visited Brigitte in Munich and took her to his secret flat in Rome, used for his other assignations. He took the children on trips to the country and told stories of his travels. And he never failed to meet his financial duties towards the Brigitte, for whom he built a house.

Just before his death in 1974, Lindbergh wrote letters to his three mistresses, asking them to continue utmost secrecy. They did! Even upon learning the truth of their father’s identity in the 1990s, two of the 3 families German continued their silence, as ordered.

That year, the American siblings spoke out. They were understandably shocked at the news of the German families and refused to believe it, particul­arly as the Hess­haimer sisters were both disabled. Lind­bergh had followed eugenics science and believed in breeding healthy children from healthy parents. Yet he had fath­ered children with two disabled women who were unable to walk prop­er­ly.

While they made no claim to Lindbergh’s estate, the German sib­lings wanted to write about their mot­­h­er’s long-term secret relat­ion­ship with their father. Their 2005 book, The Double Life of Ch­arles A. Lindbergh by Rudolf Sch­röck, was pub­lished in Germany.

Only in 2009 did Charles and Anne’s youngest child Reeve wrote about hearing of her father's infidelities and about her conn­ecting with her Eur­o­pean siblings: Forward from Here: Leaving Middle Age and Other Unexpected Adventures. She thought that by the time he died in 1974, Charles had made his life agonisingly complic­at­ed.

The so-called Crime of the Century back in 1935 certainly traumat­ised Lind­bergh. But could Lindbergh’s oth­er wiv­es and chil­d­ren und­erstand the kidnapping tragedy as the main cause for his life­long char­acter disorder. Did they even know about it? Biographers said that the murder of his son certainly did set off something crippling in Charles Lindbergh’s already disturbed personality.

I think your last sentence says it all, "already disturbed personality".

Hello Hels, Cozying up to the Nazis and blaming it on the Jews is not the result of a personal tragedy. It is a result of being a raging racist and anti-Semite.
--Jim

I struggled a bit supporting two children, let alone 12. I wonder if he financially supported them all equally.

a lot of people are much more skilled with machines and technology than they are with human relationships, including half the engineers and computer programmers that I know. But if that was blatantly so for Lindbergh, why did he "marry" woman after woman? He knew his skills and weaknesses perfectly well, as did his parents.

being anti-war is not the same as being pro-Nazi, racist and anti-Semitic. So yes, although a lot of decent Americans did not want to send their sons off to a distant war in 1939, Lindbergh was not one of them. He had other goals.

Charles Lindbergh had plenty of money, so if he didn't support the children in his four separate families, it was due to the secrecy he was committed to! I wonder if the complete details of his four families will ever be uncovered and published, let alone any other "wives" and babies he had.

How interesting, I really liked your post, I did not know your blog, delighted and happy summer.
by the way, do you want us to follow each other?

Yono
Welcome aboard, but August is the coldest month of the year here. That aside, I wonder if all humans are both heroic and flawed, and only history will make a decision which was dominant.

well I was exhausted after reading about this . My goodness he must have been very organized and also quite focused on his own needs rather than anyone else . I wonder whether his support fro his children was also based on his own need fro privacy and to keep a secret than any real care fro his children and mistresses. I am amazed that these women were compliant and sisters too!I have to say he seems to me like a raging narcissist who had a very low ability at empathy . I cant like anything about him.

I too am still exhausted, and confused, years after writing about my first heroes who turned out to be very unpleasant and destructive people. Lindbergh's first solo trans-­Atlantic ­plane flight from New York to Paris, in 1927 was truly dangerous, daring and monumental.

But was the overwhelming adoration of the entire nation the CAUSE of Lindbergh's appalling thinking and behaviour? I think not...the evidence seemed clear that he was disturbed in his human relationships from the beginning, and was a nasty racist as well.

Hi Hels - I'd no idea about this ... what interesting reading - thank you! All the best - Hilary

Probably most people outside the USA knew nothing more that a famous flier's son was kidnapped, and Hauptman was executed. The books that have been published this century have changed all that.