Wassily Kandinsky (1866–1944) was born in Moscow, and spent his childhood in Odessa, fostered by a relative. In high school he learned to play the piano and cello. Then he enrolled at the Moscow University, studying law and economics, succeeding in teaching law.

Kandinsky’s youthful fun with colour symbolism and psych­ology continued into adulthood so it wasn’t surprising that he wanted more art stud­ies. In 1889 he was part of a research group that trav­elled north of Mos­cow. He wrote that the houses and chur­ches were decorated with such shimm­ering colours that on enter­ing them, he felt that he was moving into a painting.

By 30 Kandinsky had given up his promising career teaching law ..to enrol in the Munich Academy. He was not accepted, so he began learning art on his own. That same year, before leaving Mos­cow, he saw an exhibit of Monet paintings and loved the impress­ionistism of Haystacks 1890.

In 1896 he settled in Mun­ich, studying at the Munich Academy of Fine Arts. 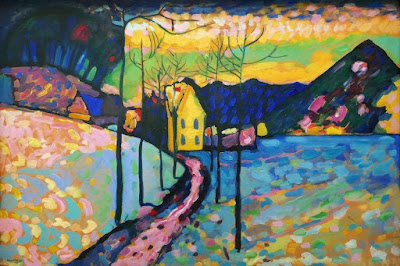 In 1902, Kandinsky successfully ran a summer painting classes in the Alps near Munich. It was then that he em­erged as an art theor­ist as well as a painter. The number of his paintings in­creased in the early C20th, especially the land­scapes and towns on which he used broad strips of colour. Humans appeared in few of his works eg Sunday, Old Rus­sia 1904. Riding Couple 1907 depicted a man on horseback, tenderly holding a woman as they passed a Russian town with bright walls; the river reflections sparkled with spots. Fauvism and pointillism were appar­ent in these early works.

Perhaps the most important of his paintings then was The Blue Rid­er 1903, showing a small cloaked figure on a speed­ing horse in a rocky meadow. The rid­er's cloak was medium blue, in the fore­ground were blue shadows, and trees in the background. This became an increas­ingly conscious tech­nique used by Kand­in­sky in subsequent years, culminating in the abstract works of the 1911–4 period. 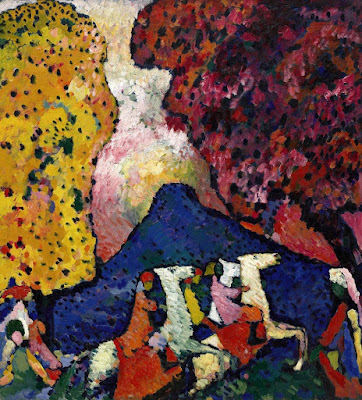 Kandinsky travelled across Europe, set­tling in Bavaria. The Blue Mountain 1909 showed his move toward abstraction - a mountain of blue flanked by two broad trees, a yellow and a red. A proc­ess­ion, with 3 riders and others, crossed at the bottom. The Fauv­ist faces, clothing and saddles of the riders were each a single colour, while the walking figures were undetailed. Blue Mountain’s broad use of colour illust­rated how colour was presented independ­ently of form, and which each colour was given equal attention.


Music was important to the birth of abstract art, since music was itself abst­r­act; it did not try to represent the exterior world, but expressed the soul. Kan­d­insky could use musical terms to identify his works; he called his most spontaneous paint­ings im­prov­isations and his more elaborate works as compos­itions. After attending a concert in Jan 1911 in Munich, Kand­in­sky was sympath­etic to Arnold Schoenberg; he was looking to free visual art from formal strictures similar to those that Schoenberg was rebelling against in music. As a result Kand­insky created Impres­sion III Concert.

Art theorist Kandinsky probably infl­uen­ced the history of Western art more from his theoret­ical writ­ings than from his paintings. His analyses on forms and colours resulted not from simple associations but from the painter's inner experience. He spent years creating abs­tract, rich paintings, endlessly observing paintings and noting their effects on his sense of colour.

Kandinsky helped form the Mun­ich New Art­ists' Association, becoming pres­ident in 1909. How­ever the group could not integrate his rad­ic­al approach with normal artistic concepts, so the New Artists’ Ass­ociation dissolved in late 1911. 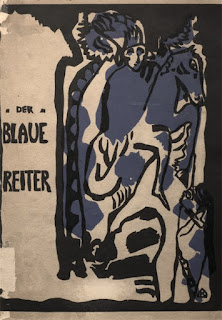 The Blue Rider Almanac, 1912
1st edition of book with articles and artwork by the Blue Rider Group of Artists.

When Kandinsky met Paul Klee, August Macke and Franz Marc in 1911, he had them in­cluded in his avant-garde Munich exhibition in 1912. Kand­insky then form­ed a new group in Munich, Der Blaue Reiter/Blue Rider, with his closest artists eg Macke, Marc, Albert Bloch and Gab­riele Münter. Kandinsky and Marc were the main fig­ur­es in the new Expressionist art group; they influenced the vigorous forms that were the ext­er­nal expressions of their creativity. His books On the Spir­itual In Art 1910 and The Blue Rider Almanac 1912 prom­oted abst­ract art.

In Britain Kandinsky partic­ipated in the 1910 Allied Artists' Ex­hibition held at London's Royal Albert Hall; his work was well praised in The Art News. By 1912, his essay On the Sp­iritual In Art was re­viewed by Michael Sadler in the London-based Art News and was soon tran­slated into English. And this publicity led to Kandin­s­ky's first works entering a British art collect­ion. Sad­ler bought wood-prints and the abstract painting Fragment for Composition VII dur­ing a 1913 visit by Sadler to Munich. These works were disp­layed in Leeds University and in the Leeds Arts Club, from 1913 on.

Der Blaue Reiter held two exhibits and more were planned, but the outbreak of WWI in 1914 intervened and sent Kandinsky back to Mos­cow. Following the Russian Revolution, Kandinsky helped est­ab­lish the Mus­eum of the Culture of Painting. In 1916 he met a woman (1899-1980), they married in 1917 and had a son that year. But by then his sp­ir­itual outlook was clashing with Soviet society values. He returned to Germany in 1920, just as Walter Gropius, director of Bauhaus, was hiring modernist designers like Marcel Breuer, Klee, Kandinsky and Laszlo Moholy-Nagy. 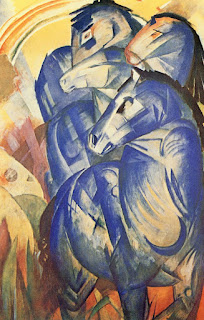 Kandinsky’s movement lasted for a short, but important time. While the art com­munity never embraced his radical expressionist ideas, the ideas of Der Blaue Reiter artists helped lay the groundwork for abstract experimentation.

Hi Hels - really interesting to read how he developed and was prepared to be creative, as well as change disciplines ... shows a passionate man, who realised that crossing boundaries - physical and well as disciplinary was a necessary part of his life and opportunities to experiences many things. Thanks for the history of his life ... Hilary

Reviewing an exhibition in London that included works by the Russian Wassily Kandinsky, Roger Fry turned to precisely the same analogy when he declared that Kandinsky's paintings became 'more definite, more logical and more closely knit in structure, more surprisingly beautiful in their colour oppositions, more exact in their equilibrium. They are pure visual music.'

Until the last couple of years, I hadn't thought much about Kandinsky's crossing boundaries. But you are so right! And not just from Russia, to Germany, to France, Tunisia and Britain. Also he studied law and economics, worked in law, was an academic, was passionate about music and trained in Germany to be an artist. Thankfully he loved his Baltic grandmother, particularly since they always spoke German together.

the music theme comes up over and over again, nod. Along with being creative in his different art styles, Kandinsky was open to investigating philosophy (which I do understand) and the relationship between music and painting (which I stuggle with). Roger Fry was very smart!

Hello Hels, When I wrote computer programs, which can indeed be an art form, I was often struck by their similarity to musical compositions, so I understand Kandinsky's train of thought, and will try to locate some of his writings in English. Perhaps all products of the mind are related. There is a plan which involves basic form, and which is altered and manipulated by focus, flow, and subordination.
--Jim

hello :) Are you a Kandinsky fan?

you are a man of many talents :) I find artists, composers and poets difficult to understand because their trains of thought are mostly hidden. To themselves probably, as well as to their audiences. But because Kandinsky saw himself as an art theorist, as well as an artist, he was much easier to follow than others.

I find politicians and judges difficult to understand as well, but that is because they obfuscate.

Parnassus Synesthesia, which Kandinsky had, is a condition in which one sense is simultaneously and involuntarily perceived as if by one or more additional senses. You will value the youtube Kandinsky: what does colour sound like?

thank you. I am assuming that synesthesia is a neurological difference, not a brain disorder. But in any case it might explain why I was so besotted with Kandinsky's use of colour. As Denver Art Museum wrote, colour for Kandinsky had the ability to put viewers in touch with their spiritual selves. He believed that yellow could disturb, while blue awakened the highest spiritual aspirations etc.

I hadn't realised he had synesthesia; it certainly means there's an extra dimension to his work. The Hermitage Moderns exhibition at the Sydney gallery last year had several lovely paintings by him, which were the faves of Mr P, with the accompanying story of how they remained under wraps for decades longer than the other dangerous moderns!

Joseph, Thank you for the recommendation--I just enjoyed watching it. It's not quite the same thing as synesthesia, but in the 18th century and earlier, before equal temperament came in, each musical key sounded different, with its own proportions, personality and connotations. I can imagine that a person with synesthesia in those times would have had a veritable kaleidoscope of sensations.
--Jim

I had a look at some of the Hermitage Moderns that were shown in Sydney last year. And the ones I loved most were the works done in Munich when he was greatly influenced by Fauvism eg View of Murnau: Landscape with a Green House, 1908. His flat planes and intense colours were gorgeous.

"Dangerous moderns" had a lot to answer for :)

Artists (from all media) who had a veritable kaleidoscope of sensations might have been forgiven because... after all, artists were sometimes unpredictable. I am thinking of Paul Gauguin living chaotically with Vincent van Gogh in France, yet these were two very successful artists.