At the University of Cambridge in the 1930s, Guy Burgess (1911-63) was in a group of upper middle-class students who believed that capitalism could never be democratic and that Germany, USA and UK were rapidly moving to the right.

In 1951 Burgess was recalled from his post as 2nd secretary of Washington DC’s British embassy, due to his drunk­ed­ness. Back in South­ampton he learned that a counter­intel­lig­ence investigation by British and US agencies was closing in on his Cambridge mate Maclean. He immediately told Blunt!


To avoid prosecut­ion, Burgess and Maclean left the UK and fled to France. Their location remained unknown unt­il 1956, when they an­nounced they were living in Moscow. A shaky White­hall establish­ment mounted a desperate damage limitation exer­cise, downplaying the signific­ance of the Cambridge spies. 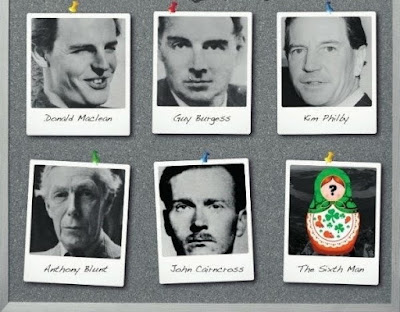 The five Cambridge Spies
Was there a sixth?
photo: Irish Examiner

Philby was forced to leave MI6, but even then his charm fooled those at the top. He was strongly def­ended by Sir Stew­art Menzies, wartime head of MI6, who believed Philby was a patriotic officer and victim of an MI5 witch hunt.

It was disclosed in 1979 that the Four­th Man in this spy ring was former Cambridge colleague Anthony Blunt, a respected art historian and member of the queen’s household, and that he had contacted Sov­iet agents to arrange for Burgess and Maclean’s flight.

But John Cairncross (1913–1995), British literary scholar and civil serv­ant, was not identified until the 1990s as the Fifth Man in the Cam­bridge Spy Ring. He worked initially in the Foreign Office, then Treas­ury and then Cabinet Office. In 1942-33 he worked in Blet­ch­ley Park and joined MI6 in 1944. When he was at Bletchley Park, Cairn­cross passed secret doc­uments to the Soviet Union. In Sept 1951, he was quest­ioned about his connexion with Maclean. Cairn­cross did not admit to spying until MI5 found papers in Bur­gess' flat with a note from him, after Burgess escaped to Moscow.

Is there anything significant left to say about the Cam­bridge spy ring, Moscow Centre’s Magnificent Five? Yes! People as­s­umed that Guy Burgess did little harm. But in Stalin’s Englishman: The Lives of Guy Burgess (2020), An­d­rew Lownie discussed the culture of a Brit­ish elite in the 1930s, during the war and after. Lownie’s latest revelations ar­gued that, far from being a minor, al­coholic irrit­ant, Burg­ess for years passed on thousands of classif­ied docum­ents to Mos­cow. Many of the documents contained very useful inform­ation, including the west’s position on key issues when the cold war started. Burgess help­ed to get Philby a post in MI6, and pers­uaded the Russians to recr­uit Blunt and Cairncross. Burgess held the group together.

Burgess not only spied for Moscow, but on behalf of competing fac­t­ions within the British government. He spied on Neville Chamberlain for MI6 and the Foreign Office. At one stage, he found himself in MI5 as one of its agents! MI6 sugg­est­ed he should penetrate the Rus­s­ians by arranging to get a Communist party post in Moscow, so he was simultaneously run­ning agents for both Brit­ish and Soviet intel­l­igence. Moscow Centre thought MI6’s sugg­estion was too risky for the animated Burgess and a distraction from the main goal of penet­rat­ing British intelligence.

Lownie discovered a memoir in Oxford’s Bodleian library by Sir Patrick Reilly, in which the ex-chairman of Whitehall’s Joint Intelligence Committee described Wilfrid Mann, an atomic scientist who worked for MI6 in Washington, as a Soviet spy. Lownie claimed Mann confessed and in return agreed to spy for the CIA.

Burgess was indiscreet, gay when it was illegal, promiscuous, drunk and a man who drove badly, so he survived bril­liant­ly in the bohemian circles of the British establishment (eg Harold Nic­olson, Victor Roth­schild). But how did he thrive among senior MI5 and MI6 officers and diplomats at the centre of Whitehall, with its powerful decision-making. 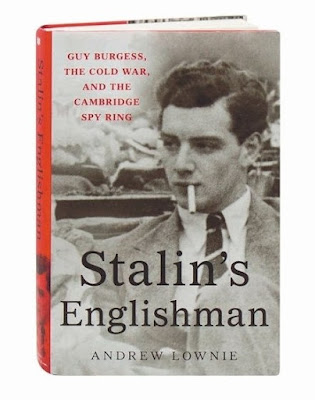 Lownie said Burgess was very open about his communism and homo­sex­uality but people didn’t necessarily believe most things Guy said. He was a very amusing talker and a natural liar… a natural cover for a spy. He seemed to charm anyone he sought, had a close personal relationship with Churchill and att­racted an array of contacts as he flitted between MI5, MI6, BBC and the Foreign Office. His open def­iance of security proced­ures was indulged because the For­eign Off­ice trusted their family.

Given the sheer quantity of information the Camb­ridge spy ring members passed on to their Russian handlers, it was not surprising that paranoid Stalin suspected them of being agents prov­ocateurs planted by British intelligence. Basing his claims on a wide range of sources, Lownie believed Burgess revealed to Moscow important secrets:

1.prewar arguments over appeasement,
2.details of the planned Sicily landings (1943)
3.decision to postpone an invasion of France (1944),
4.British and American position on Berlin’s postwar status,
5.early negotiations re setting up Nato, and
6.advance notice of US military plans in the Korean war.

In 1963 the British ex-pats were joined in Russia by their old col­l­eague Philby. Alas Burg­ess died of a heart attack that year! Blunt and Cairn­cross were offered immunity from pros­ec­ut­ion before being outed many years later.

From the day he emigrated, Burgess attracted biograp­h­ers. But Lownie wrote the first biography that captured the decad­ent, drunk­ard sex bandit, and was the first book to reveal the full extent of Burgess's treason. Even so, Lownie showed that the story of the Cambridge spy ring continues to shock. A million For­eign Office files are still being kept secret, and many more books are yet to be written.

Anthony Blunt was a great academic, linguist and royal art historian. I forgive him his politics.

Hello Hels, I cannot forgive people for betraying their country or any principles of decency. Young people such as those at Cambridge are easily led into entering movements that are ultimately harmful, but they should first examine the sponsors of those movements. We have had the same argument in your blog many times whether talent forgives baseness--e.g. Dickens, Wagner and so forth. I wonder if those who look forgivingly on Burgess and his cronies would change their opinion as they watched the treasures of the British National Gallery loaded on a train headed out of England.
--Jim

True. Blunt was a cousin of Elizabeth Bowes-Lyon, the Queen Mother, and top art historian and curator of Queen Elizabeth's art collection.

As a well connected, well educated Cambridge don, Blunt visited the Soviet Union in 1933, and was recruited. He joined the British Army in 1939 and when the Wehrmacht drove British forces back to Dunkirk in May 1940, he was recruited to MI5. Blunt passed the results of Ultra intelligence from decrypted Enigma intercepts of Wehrmacht radio traffic from the Russian front. And he passed details of German spy rings operating in the Soviet Union, eventually helping the Allies to win the Battle of the Atlantic.

So some of Blunt's best WW2 spying was simply anti-German as it should have been, but alas some was solely for Russia's benefit.

When the young men met each other in Cambridge in the 1930s, they were the brightest and most ideologically motivated students in the uni. And as the brightest men in every generation had joined the Cambridge Apostles, so did our Cambridge Spy Ring members. Additionally, once the attacks started, gays and communists badly needed mutual support.

The real problem began when passionate undergraduates joined professional positions of national importance.. like MI5, MI6 and the Foreign Office. Once spies and double agents were revealed, the trust within these agencies was fatally damaged.

In retrospect it looks like their greatest crime was not treason to their own country, but the aid and loyalty
they gave to a dictator who murdered and enslaved countless millions of his own countrymen.

I am delighted to have found this blog. Espionage is all over industry and the "other means" of politics, yet in current reality dismissed as conspiracy theorizing. Only years from now are today's counterproductive or hostile activities likely to come to light. Here's hoping our own governments can earn more loyalty.

I was so disturbed about Stalin's name in the book title that I almost refused to read the book. Stalin was a brutal dictator and the Cambridge spies were ideologically driven young men. Even Blunt said that true socialism could never come out of Russia while Stalin was alive.

I agree that espionage was always successful, whether it was by hiding men and women in enemy territory, using secret cameras, decoding the enemies' internal messages or anything else that bright scientists could devise. But sadly I have to agree that conspiracies are political nonsense to boost politicians' base support, and to confuse the public and social media.

Hi Hels - thanks for this ... I've come across most of the story ... which is pretty incredible - but those were the times. I've got a book here to read by Wilfrid, his elder brother, on Linnaeus - who was also an exceptional artist. Interesting subject and notes on the intricacies of Anthony Blunt's life ... all the best Hilary

The full extent of the espionage may never be known. Too embarassing for the British secret service.

those two brothers were pretty brilliant, yes indeed. The British Museum described Wilfrid as an art historian and collector, poet, curator of Watts Gallery in Surrey, and master flower painter.

Andrew Lownie agreed with you totally. He noted that a million For­eign Office files are still being kept secret in Britain, and will not be released for a long time, or for ever. Even after the evidence was rock solid, the senior figures in the British secret service could not believe the Cambridge Spies were working against British interests. Utter humiliation.