Marguerite Alibert (1890-1971) was born in Paris to working class parents. Young Marguerite was blamed for not having watched her baby brother properly so as a punishment, her parents sent her to the Sisters of Mary. The nuns reminded her daily that her brot­her’s death had been caused by her sins. She feared the nuns, but they did give her some education and taught her to sing well.

Marguerite left the nuns as quickly as she could and was placed with a family as a domestic serv­ant. But the job did not last long. By mid 1906, at 15, she’d become pregnant. The birth of daughter Raymonde put an abrupt end to her stay with the family. Marguerite returned home but her parents could not care for her baby daughter who was sent away to be looked after on a farm in central France.

The homeless Alibert turned to sex work instead and quickly be­came an upper-class prostitute-courtesan. The brothel owner liked her work, espec­ially since all the best clients, gentleman of wealth in France and Britain, asked for her.

By 17, Alibert was in a relationship with 40-year-old Andre Meller, a married wealthy Parisian, who bought her a flat to conduct their affair in privacy. He owned many horses and since Marguerite loved horses, that may very well have encour­ag­­ed their romance. The couple broke up in 1913 yet Alibert often used his surname as her own. 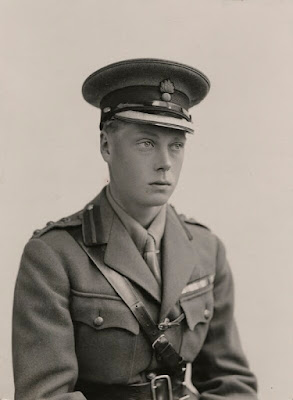 The Prince of Wales disembarked in France from the Pas de Calais, 1917


Alibert met 22-year-old Edward Prince of Wales (1894–1972) in 1917, one year before WW1 ended. Colonel Edward partied in Paris while on leave from his regiment on the Western Front... and it was there he met his first mistress. Alibert helped transform him from an inn­oc­ent lad to the darling of society and later a much-loved King.

Thank you to the book The Prince, the Princess and the Perfect Murder, by historian Andrew Rose. It took Rose several years to research Alibert’s affair with Prince Edward, discovering documents in her grandson’s collection. Best of all, Rose read Alibert’s journal outlining her affairs and the fact that she’d been married and divorced five times.

The Prince was infatuated with Alibert at first sight and they became lovers for at least a year. Alibert was a few years older and was far more sexually skilled than the Prince. Alibert was said to have a dominating streak, and she’d often sleep with a gun under her pillow. But she was also intel­ligent and art­iculate, as well as being skilled in the bedroom, making her highly sought after. Their affair was intense, so the Prince made multiple trips to Paris until mid 1918. Then the affair petered out.

The most foolish thing the Prince did during the affair was write 20+ very indiscreet letters to his mistress, detailing his sex needs, mil­itary matters and intimate information about his diffic­ult father, King George V. There were numerous mistresses after Al­ib­ert, but Edward’s French former lover remained a constant worry to the Prince's minders due to his surv­iving letters.

To the relief of the court, Edward shifted his int­er­est in 1918 to a mar­ried British woman, Freda Dudley Ward. Marguerite knew she was no longer his mistress, but she wasn’t going to be simply cast aside. So she aimed to benefit financially from the future king, via blackmail. In Nov 1918 Edward received a letter reminding him of their mail! 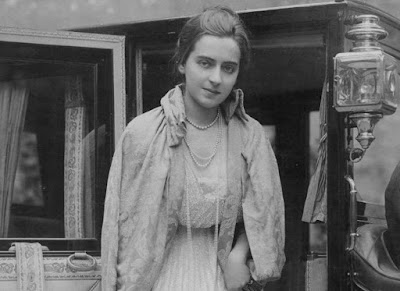 Fortunately for Edward, Marguerite quickly moved on from her rel­ationship with the Prince to Charles Laurent, a young, rich and handsome Air­force officer. Laurent's family owned a famous hotel and shops in the Grand Magasins du Louvre. They mar­ried in 1919 but the marriage failed and was soon dissolved. Fortunately for Marguerite, she received a large divorce settlement, paying for her flat, a stable of 10 horses, two cars and servants.

This Catholic French woman met the extremely rich Egyptian playboy Ali Fahmy Bey of Egypt, 10 years her junior. The Bey proposed marriage, and she accepted, but with cond­it­ions. A contract was drawn up that permit­ted her western-style clothing and to divorce the Bey at any time. In return, she would convert to the Muslim faith, thereby ensuring Ali’s in­her­itance. They married in Dec 1922 in Egypt, by a civil cere­mony and then in a Muslim wedding in Jan 1923.

But just before the rel­ig­ious ceremony, Fahmy ord­ered the divorce clause remov­ed. Marguerite hated the abusive man; he frequently beat her and got a houseboy to follow her all day. So the marriage was a dis­aster and when it finally failed, it did so in the most explosive, dramatic way.

The couple trav­elled to London in July 1923, and registered at the elegant Savoy Hotel. The couple attended the theatre, then returned to their hotel, had a violent fight and the Bey left. In full even­ing dress he took a taxi towards Piccadilly, visiting either a nightclub or a prostitute.

At midnight, in a violent thun­d­er storm,  Savoy’s nightporter heard 3 gunsh­ots. Rushing upstairs, he found Marguerite holding her pistol. Her husband Ali Fahmy Bey lay dead with 2 bullets in the back and one bullet in the head. As police arrived to take Marg­uer­ite away, they apparently realised she’d been the first lover of the heir to the British throne.

Marguerite appeared at the Old Bailey for the murder of her husband, dressed by Chanel, with jewellery by Cartier and accessories by Van Cleef & Arpels and Louis Vuitton. 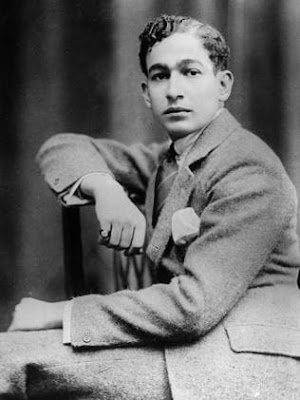 The royal family never breached family secrets! So at Old Bailey, Prince Edward’s advisors had to make a secret deal with his ex-lover. If she returned all of Edward’s letters from Cairo, her sexual past would never be mentioned in court and her freedom was guar­an­teed. Instead the trial would focus on Ali Fahmy’s violence. Meanwhile Prince Edward was whisked away to Canada on a royal visit and his secret past remained buried. His notorious womanising was probably not quite suited to his future role as King.

Alibert was acquitted of both murder and manslaughter, and lived lavishly in Paris. She played small parts in movies, and charmed wealthy men until she left the public spotlight. She died at 80, in 1971.

Conclusion
Alibert and Prince Edward had had a serious affair that event­ually exploded, full of royal passion, blackmail, sex and intimate letters. Edward got lucky, at least until he ab­dic­ated the throne for Wallis Simpson 20 years later. But he was far from the first royal with a secret eg Queen Victoria and John Brown, Princess Louisa's baby, Bertie's (Prince Albert) court cases etc. So how did this royal deal with Marguerite remain secret from the public for c100 years?

Talking of secrets, Tweedland has the fascinating story of  the British state plot to assassinate King Edward VIII. How did we not know about it?

I've never been much of a Royalist. This just another push towards not wanting them at all. However, I am not blind to the way in which the stability of our current Monarch has helped to steady the ship on occasions.
I am certain that in time this delicious story will reach Hollywood!
CLICK HERE for Bazza’s reassuringly rhadamanthine Blog ‘To Discover Ice’

I am not much of a royalist either, but _not_ because various princes and princesses were shockingly getting their knickers off, before and after they were properly married.

If Prince Edward had a passionate love affair that event­ually ended, that was not a reason to use of the army in WW1 to protect the prince's love life, to use their own blackmail and pay off other peoples' blackmail, to pervert justice in the courts, to exploit upper class women who were married to other people etc etc. What a creep :(

Prince Edward didn't select his partners very sensibly, did he?

Hello Hels, And we were just exclaiming that the Kray twins were low-lifes! You already know my feelings about Edward, and this is just one more piece of ammunition against him--actually, one of the least damning ones, compared to the enormity of his other activities. I hate it when people use either brutal strength or society position to get away with lawlessness and immorality, riding roughshod over whomever they please.
--Jim

I knew none of this although not surprised. A fascinating post.

Edward Prince of Wales was young the first time, a long way from home and in the midst of a horrible war. He would have fallen in love with the first woman who looked at him, even knowing she was a classy courtesan.

After that he made really bad decisions, but it seems that none was more ridiculous than his relationship with Mrs Simpson.

This was far from the worst case of a royal getting away with lawlessness and immorality. And it won't be the last. But to show you that a sense of entitlement affects a wider range of powerful people, we have an ex-judge of the High Court of Australia (our highest court) who had been sexually assaulting his female court colleagues since the 1990s. Despite an internal High Court inquiry has found that the judge had indeed sexually harassed at least six women on his staff, I believe the judge will never be gaoled or fined.

me either. Until historian Andrew Rose did years of research and writing, I imagine very few people on this earth would have remembered the story.

Hi Hels - I hadn't heard this story ... but sounds like an interesting book - to say the least. Take care - Hilary

I became a little confused by Marguerite's two names but I worked it out. All quite fascinating and I like your reply to Parnassus. Just as well there aren't sleaze bags in the royal family now......ah, oh dear. What you wrote rather sums up my feelings. I have a very distant family connection to the Marquess of Lorne, or so family lore goes.

normally criminals are largely assumed to come from the working classes, the unemployed and immigrants from other countries. But I would suggest that an equal amount of immorality and nastiness comes from royals, parliamentarians, judges, senior policemen, senior army officers and church bishops.

Are you really connected to the Marquess of Lorne? They need a family member for a genetic test :)

The lives of strangers can be endlessly fascinating, that's for sure. I do quite enjoy these scandal-mongering biographies for their truth-is-stranger qualities, if nothing else, and might put the book on My List. I like the small details like what the courtesan wore to her trial, which would evidently come from the journalists of the day, who will always know what the braying public want to know :) Albert, on the other hand, was a royal goose from start to finish and we of the Commonwealth dodged a bullet there!

Good to see you :) Blogspot has changed its structure and I am not sure what will happen to my blog in the future. I need my grandchildren to help me.

Now back to the business at hand. Well worth reading, even if I am never sure how much scandalous stories are based on verifiable facts. But I am certain that Edward Prince of Wales was more than a goose.