Zlin was a small town in the Moravia region of Czech­oslov­akia with a population of only 3,000 at the end of the C19th. Bata Shoes’ first factory was opened in Zlin in 1894 by Tomas Bata, (1876–1932) a Czech foot­wear empire that eventually generated id­entical company towns all ov­er the globe. Once Bata's shoe business bl­os­­somed, the com­pany sp­on­sored impressive arch­it­ect­ure and modern town planning. Tomás drew on emerg­ing ideas of the Garden City from the UK and on the work of Swiss arch­itect Le Corbusier to create model housing areas in Zlín for his workers. The town planning was actually done by Frantisek Gahura a student from Le Corbusier's atelier in Paris, and profoundly effected by Russian Constructivism.  Gahura worked for the Bata Shoes organisation in the 1920s and 1930s, designing simple, boxy red brick houses that were laid out, surrounded by greenery in this garden town. 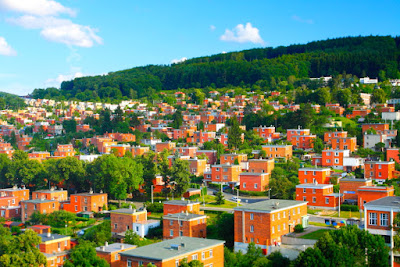 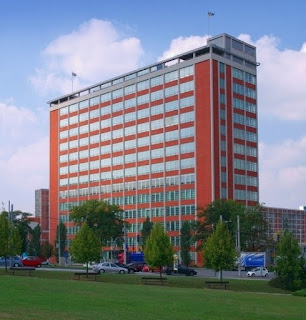 Bata skyscraper, designed by Vladimír Karfík.
It was built between 1936-38 at the instruction of Jan Baťa.

Eventually the Bata Company employed 16,560 work­ers, ran 1,645 shops and 25 factories in 39 countries around the world. Broth­er Jan Baťa (1898–1965), following the plans laid down by Tomáš before his death, expanded the company more than six times its or­iginal size across Czechoslovakia and beyond. Jan Bata comm­is­s­ioned a noted piece of Constructivist de­sign for the company head­quarters and the highest building in Czech­oslovakia at the time. Jan had his own of­f­ice const­ructed in a lift which moved outside the building!

Zlin produced some great stars. Students at the Bata School for Young Men included, for example, 1948-52 Olympic ath­lete Emil Zát­opek. His incredible talents was recently named by Runner’s World as the Great­est Runner of All Time. And someone else. Were it not for the heroic nature of the Bata business, we might never have en­joyed Tom Stoppard's important literary legacy. Whose legacy?? 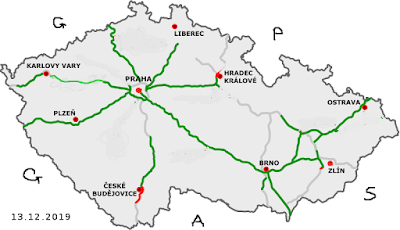 Map of Czech Republic
surrounded by Germany, Poland, Slovakia and Austria.
Note the location of Prague, Brno, Zlin and my husband's home town next to Liberec

Tomas' father Dr Eugen Straus­sler was a company doctor working with Bata, paid by the boss because moral employers always looked after the health of all their employees. Just before the German occup­at­ion of Czechos­lov­akia, Jan Baťa helped his Jewish emp­l­oyees (mostly doctors) to branches of his firm outside Eur­ope.

In Mar 1939, when the Nazis invaded Czechoslovakia, the Straus­slers fled to safety in Singapore where Bata had a factory. They spent 3 years in Singapore, before the Japanese occup­at­ion of Singapore in Feb 1942, for­cing Martha to flee with the two boys to Brit­ish Ind­ia. Dr Eugen Straussler remained in Singapore as a British army vol­­un­t­eer, knowing that doctors would be needed in its defence. Eugen was to follow, but his ship was app­arently sunk by Japanese bombers. Alternatively he may have died in cap­tiv­ity as a Japanese prisoner of war.

The family moved around India then settled in Darjeel­ing so that Martha could be the manager in the local Bata shoe shop. They were­n't Raj bec­ause they were Czech refuge­es, but Tomas loved every as­p­ect of their life there. The boys attended the Ch­ristian boarding-school Mount Hermon School, the place where Tomáš became Tom and his brother Petr became Peter.

After the war ended, Tom’s mother Martha married the British army major Kenneth Stop­pard, who gave the boys his English surname. And in 1946, he shipped the family to the UK. They drove up to Notting­ham and were warmly welcomed by the step­father's family. Tom was 8 and sudd­enly an English schoolboy.. who didn’t speak Czech any long­er. After being educated at schools in Notting­ham and York­shire, Tom Stoppard became an English journalist, drama critic and later a playwright.

Visiting Czechoslovakia in 1977, Tom Stoppard became friends with play­wright and future president Václav Havel and other dissident writers. And visited Soviet dissidents including the Sak­har­ovs in Moscow. He said he had taken every possible side in political deb­ates. But in eastern Europe in the 70s and 80s, he started taking sides. Look­ing back, he understood that his foc­us had been very narrow. From then on, he became interested in the shadow thrown by Soviet communism.

He has written often and well for TV, radio, film and stage, find­ing prominence with plays such as Arcadia, Coast of Utopia, Every Good Boy Deserves Favour, The Real Thing, Trav­esties, The Invention of Love, and Rosencrantz and Guildenstern Are Dead. He co-wrote the screenplays for Brazil, The Russia House and Shake­speare in Love. His work cov­ers the themes of human rights, cen­sorship and politic­al freedom. 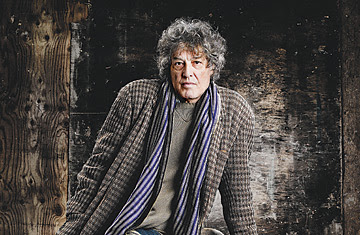 Much later in life, Stoppard recorded assessments of his own life and works which were then published in the book Tom Stoppard in Con­versation (1994). These conversations work shed light on both his intent and his creative process. And it revealed that all four of his grandparents had died Auschwitz in WW2, along with three of his mother's sisters.

After his parents' deaths, Tom returned with his elder brother to Zlin in 1998, for the first time in almost 60 years. The Czech premiere of his 2006 play Rock 'N' Roll was one of the big literary and social events of the year, attended by Stoppard, and also by many prominent former Czech dissidents. The level of interest was high because of the very Czech subject matter of the play.

In 2008, Tom Stoppard placed #11 in The Daily Telegraph's "100 Most Powerful People in British Culture".

Book for Stoppard's new play Leopoldstadt, Wyndham's Theatre London. In the early C20th, Leopoldstadt was the old, crowded Jewish quarter of Vienna. But Hermann Merz, a manufacturer and baptised Jew married to Catholic Gretl, has moved up in the world. Gathered in the Merz apartment in a fashionable part of the city, Hermann’s extended family are at the heart of Tom Stoppard’s epic yet intimate and heart-breaking drama.

Bata's history in Australia is interesting, including outlets in Mornington and Carrum Downs.

This family was able to achieve so much in spite of constant uprooting and tragedy--it is easy to understand their political sensibilities. As regards the worker housing, it looks attractive in the photo, and I am sure that it is in fact much nicer than most purpose-built mass housing, but I still can't quite be convinced that planned communities are the ideal. I value individuality and growth over time to make a truly comfortable and inspirational place to live--but that's just my personal opinion!
--Jim

thank you. My Czech mother in law was delighted when Bata first opened in Australia. It was important for her sons' school shoes.

of course most people would have valued individuality at the turn of the century, if they could have afforded it. But the truth was that factory workers lived in cramped and unhealthy conditions and were delighted when pleasant housing was provided by wealthy industrialists. Even if the new houses were a bit repetitive and not large enough.

Rowntree's Chocolates founded the village of New Earswick in North Yorkshire for low income families in 1902 where quality education was provided for workers’ children.

A great post . That was SO interesting . One of your best . Thanks so much . Wish I could see Leeopoldstadt.

I had already written this post on Zlin, Bata shoes and Tom Stoppard (born 1937) a few months ago and was just waiting for its publication date. Then _this very week_ an invitation to see Stoppard's new play Leopoldstadt arrived in my email!

Not only are the reviews of Leopoldstadt amazing, but the relevance of Stoppard's history in Eastern Europe is becoming visible for the _first_ time in his long life. This post was blessed :)

Hi Hels - I'd no idea of Tom Stoppard's origins - how absolutely fascinating ... I must read his 'Conversations'. I lived for a while in Northamptonshire and there was a Bata factory there - but I'd no idea about 'the Bata empire' or its history. So pleased to have read this - all the best - cheers Hilary

Tom Stoppard had no idea of his origins himself! His father died too early, his mother wasn't talking at all, and the young man forgot his Czech language. He travelled around Eastern Europe in the 1970s as a politically concerned Brit, but not as person returning to his roots.
I imagine that until someone told him of his family of origin in the 1990s, he didn't even know that his birth name was Tomas Straus­sler.

You will enjoy Tom Stoppard in Conversation.

Who would have guessed the connection between Stoppard and Bata shoes. I'm sure you are aware of the Bata museum in Toronto.

What a fascinating story! I think of Bata shoes and instantly remember the Bata Scout ads growing up. I did covet those Ponytails though ... We'll be in London in May but looks like too late to catch TS's latest play, sadly.

Goodonya for raising the museum. I remember Bata's presence in Toronto but I assumed it must have been started by the original Tomas Bata (1876–1932) and his wife. Of course the 100 Czech Bata workers and their families didn't move to Canada until WW2 had broken out, so all the hard work in Batawa Ontario was done by the next generation Tomas Bata II (1914-2008) and Sonja his wife.

Sonja's Bata Shoe Foundation and later her Bata Shoe Museum were very clever. She was also director of the Art Gallery of Ontario.

I remember the Bata school shoe ads with the poofed up hair and the VERY short school uniforms :) For a very conservative school shoe, the high school students were the very opposite of conservative. My headmistress would have had a stroke.
https://www.youtube.com/watch?v=FSaLBEDVLvI

Leopoldstadt will continue at the Wyndham’s Theatre London until 16th May 2020. I hope that fits in with your travel plans.

Leopoldstadt has been extended until mid May, probably on the strength of ticket demand. I am a huge admirer of Stoppard's work and we will be seeing this new play. He has said that he set it in Vienna because he didn't want people to think it was about himself - although it largely is - how modest of him!
I seem to remember an interesting post of yours about a German worker's town built before the war. Also, of course, Post Sunlight has a similar history being built by the soap manufacturers, Lever Brothers.

Since I haven't seen Leopoldstadt, the summary and review published above came from the theatre's own home page. But I would be more delighted if you could see the play and then give your honest opinion in this blog. After all, Stoppard was born in 1937 so I can't see him writing too many major new plays into the future.