The Black Plague of 1348. Any connection to SARS and Coronavirus?

Prior to 1347, there had been plague in Eur­ope, but its effects were geographically limited. Peasants worked for noble landlords in exchange for prot­ection and use of land i.e a feudalist sys­tem. Thus most peasants were impover­ish­ed serfs who never travelled.

Catholicism was all-powerful in Europe. Dying the good death was the ideal situation for any Christian; a prolonged sickness, or advancing old age, would give an individual time to consider his sins, confess and repent. But what if disease was sudden and unexp­ected? Clerics were the only Church-approved medical prac­tit­ion­ers, so many Catholics relied on the Church for healing.

Before the Crusades began in 1095, Europeans rarely travelled to the Near East. Then the trade increased, population grew, commun­ities urban­ised, living conditions became unsanitary and health care failed. Once Eastern commodities were rediscovered, an increased desire for new trade routes to Asia was ignited. Trade between con­t­inents became more common and then expanded again in the C13th, increasing urbanisation and dense living conditions.

Thus Europe’s population outpaced the development of its resour­ces. Infrast­ruc­t­ure like sewers crumbled, result­ing in people sharing water sources and in waste running through streets. People inter­act­ed with disease carriers like rats. 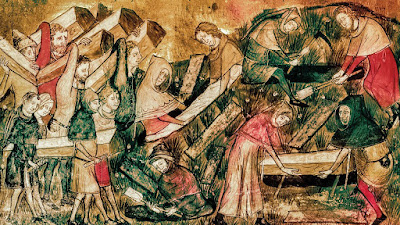 The burial of the victims of the Black Death,
Tournai Bibliothèque royale de Belgique

The Great European Famine of 1315-17 caused by the popul­ation increases and crop failures, led to the deaths of c10% of the pop­ulation. In the 1330s, central Asian kingdoms suffered terrible plagues while exp­loring new trade routes. In 1346 plague-ridden Tatar Mongols assailed trading centres on the Crimean peninsula, populated primarily by European traders; those traders in turn spread the plague when the victims fled back to Europe. The war­time conditions during the Hundred Years’ War of 1337­-1453 between Eng­land and France caused chaos; sold­iers caught the disease in battle and spread it on returning home.

In the decades after the pandemic, Europe experienced significant economic, social and religious changes. The first economic change was the shift in the value of land and goods. Many workers had died, creating difficulties for land owners; it was more difficult to produce goods and to obtain goods through trade. Both caused an inflation in prices for goods, just as land val­ues deflated.

When the labour supply plummeted, the peasants could demand slightly higher wages. How ironic that the pandemic inspired peasants’ ex­ploration of revolutionary ideas and the creation of Poor Laws. Peasant rebellions started in France in 1358 and in Italy in 1378. Wat Tyler's Rebellion in England took place in 1381. 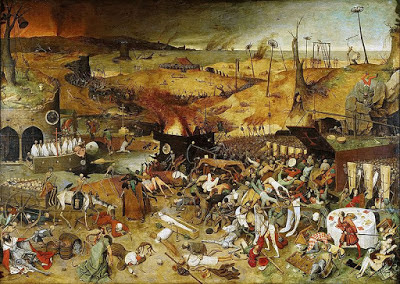 There was a growing mistrust of the weakened Catholic Church. The Church lost many clergy members during the pandemic and without their spiritual help, people needed medical support from diff­erent sources. People questioned why they were not saved from God’s punishment, even though they’d been good Catholics.

People quickly realised the inevitability of death. Art started to show death’s grim influence eg Triumph of Death by Piet­er Bruegel. Artists coped with the devast­at­ion by creating a new dark genre: the Dance of Death. The possibility of sudden, miserable death evoked a hysterical de­s­ire for human activity, while they could. The Dance of Death was like the mediaeval mystery plays, strongly advising people to always be prepared for death.

Death and his infected victims moved in groups, dancing as their bodies twitched with spasms. People who engaged in this activity were in a frenzied trance! In fact the people afflicted by this obsession could die of exhaustion or hunger. The survivors could fall into a state of permanent mental illness and tremors. More about a specific death dance in a later post.

Medical practice improved after the pandemic. While medical pract­ice was still outlawed from non-Church staff, more people turned to independent practitioners. Plus many European governments created efficient public health protocols. Early forms of quarant­ine were developed and infected ships had to wait in the harbour.

The physicians were unable to treat the plague, so the impact of the Black Death on the medical profession was largely after the plague ended. Having revealed the shortcomings of the existing medical system in Europe, the top medical pract­itioners had to focus on theories of causation and prevention of disease. Physicians had to both develop treatments for the plague and take measures to secure their status by pushing for the regulation of medical practices. The Black Death did not completely destroy the existing medical system. Education based on the works of Hippocrates and Galen survived in the univ­er­sities, however the teaching of surgery and anatomy were gradually included as well. Thus the Black Death helped shape medieval medicine's course of development. 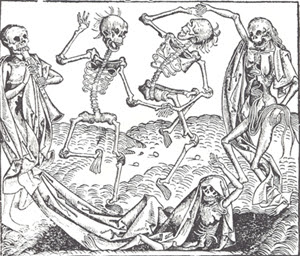 The Orchestra of the Dead, 1493
woodcut by Michael Wolgemut

Conclusion
Europe’s population outpaced the development of its resour­ces in the C14th. Infrast­ruc­t­ure like sewers crumbled, result­ing in people sharing water sources and in waste running through streets. At least the peasants who survived the plague were able to get better wages & working conditions! So while the Black Death was a catastrophe, the shattered feudal system, winding down of serfdom, more sophist­icated medicine and a better economic system.. all cont­rib­uted to an improvement in European life in the long run.

But what can we learn from the Black Death about the transmission of plagues, quarantine and treatment of C20th infections. SARS (2003 from China), MERS (2012 from Saudi Arabia) and Coronavirus (2020 from China) are viruses and not bacteria, as the Black Plague was. But the speed of aeroplanes these days makes world travel an even more critical issue. 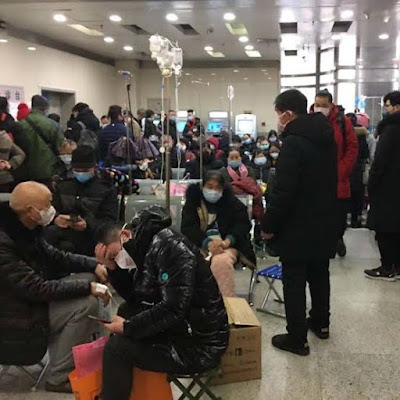 You may like to read Death, Dying and the Culture of the Macabre in the Late Middle Ages by E R Huber.

If we had learnt anything from the 1438 epidemic, perhaps the Spanish Flu of 1918-9 would not have killed at least 50 million people. But then the Spanish Flu was also a virus and not a bacterial infection.

Hello Hels, Coronavirus is a real concern here--I looked out my window, and over 90% of people were wearing face masks. One symptom is coughing, but since the weather is cold and dry now, almost everyone coughs to some degree, inspiring worry. Like everyone else, I am waiting to see how it develops, and am worried that possible travel plans (my usual trip back to Ohio) may have to be altered or cancelled.
--Jim

I imagine that had the medical profession known about antibiotics, the bacterial infections in medieval Europe would have been wiped out very quickly and some 25 million lives would have been saved. But the Spanish Flu, SARS, MERS and Coronavirus would never have responded to antibiotics. So the first scientist to discover a cure for the viruses should win a Nobel Prize.

nod.. everyone has to be super cautious. If you work at home and don't need to use public transport, so much the better. Be healthy!

Hi Hels - viruses are so difficult - but the conditions in China leave a lot to be desired and maybe relate to those we had back in the 13th or so centuries. It'll be interesting to see what happens - cheers Hilary

it is so confusing. The Spanish Flu probably started in British Army camps in mainland Europe, or in Army training camps in the USA; MERS originated in Saudi Arabia and SARS in China. The source of the viruses seems to have been either bats or camels.

We have quite a long way to go, apparently.

It is interesting to note how China is dealing with Coronavirus with much more sophistication and openness than it did with SARS. I just had a look at a useful chart, with the worst in our lifetime by a huge margin was H1N1, that is swine flu. The next was Ebola, but Coronavirus is already the third worst and isn't over yet.

agreed. The Chinese authorities were not very helpful to the rest of the world regarding the SARS epidemic of 2002, presumably to prevent national shame. But in 2020, naturemedicine reported: "Climate change is modifying the ecosystem. And the concentration of animal vectors, the rapid expansion in air traffic, the movement of people across different borders and political conflicts are all factors making these new pathogens spread easily across the world".'

Only 18 years after SARS, a consortium led by Chinese scientist and international researchers was rapidly brought together in a massive effort of national and international coordination. The whole world MUST be involved, these days.

well I am not so sure that the Chinese government is being any better than it has been .It seems to be swinging into action faster than it did before but it is prosecuting people who have dared to speak up and say anything about it . I dont think we can trust them at all.
I am hoping that this and the terrible fires brings home to people our vulnerability to nature and the need to treat this planet with more respect . I am not holding my breath though .

On the news this week, I heard the U.S. stock market say the worst catastrophe to come out of the coronavirus was the rapidly falling stock prices.

I don't think we can trust anyone :(