The Russian ballerina Anna Pavlova (1881–1931) was initially believed to be too tall and not athletic enough to succeed at ballet, yet still graduated from the Imperial Theatre School in St Petersburg in 1899. In 1906 she was promoted to prima ballerina. Although she performed in the opening season of Serge Diaghilev’s Ballet Russes in Paris in 1909, she did not join the avant-garde outfit. Instead, in 1911, she form her own company which toured until her death in 1931. This star had my three most important qualities, being Russian, a great artist and an independent, strong woman.

During her first tour in 1926 Pavlova and her 45 dan­cers visited Melbourne where His Majesty’s Theatre was the venue for the first season. Her partners were Laurent Novikoff and Algeranoff. The debut performance attracted a packed audience of thousands. The Fairy Doll was to be performed first. Algeranoff recalled that while climbing the steps to take up her position as the Fairy Doll, Pavlova said to him, “Perhaps they like, perhaps not, who can tell?” And he recalled that friends of his in the audience told him that people were bewildered because, at first, she merely stood still: but from the time she started dancing, the success was amazing. The Melbourne Argus (15th March 1926) noted in its massive, enthusiastic two column review that Australians had never seen such art. 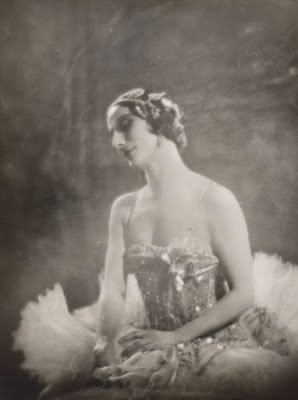 The final night in Melbourne surprised the company with an Australian custom, the throwing of paper streamers, which flowed from every part of the theatre. The success of the Melbourne season had been beyond all expectations. Australasia Films had planned to make a movie of the company while they were in Melbourne, and a number of short films were made in the grounds of Sir George Tallis’ home in Toorak. The stills were printed in newspapers and magazines. 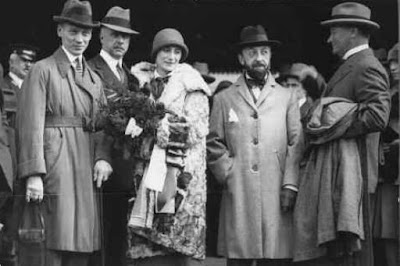 So famous was she that ten thousand people welcomed her on arrival by train at Sydney's main railway station. [No-one other than King George V himself received such large and welcoming crowds]. Later they presented about 15 ballets and 39 divertissements (short pieces like The Dragonfly and The Swan, for which she was particularly renowned). She presented 15 ballets where a teenage Robert Helpmann (1909–86) was one of the extra Australian dancers, hired for the event. Finally she continued on this section of the company’s world tour in Brisbane, Adelaide and New Zealand, again to rapt acclaim.

For her second Australian tour in 1929, Pavlova travelled thousands of ks in Queensland, on a special train that was proudly provided by the Queensland state government. They visited the rural cities of Rockhampton, Mackay and Bundaberg prior to her Brisbane opening in the newly completed His Majesty’s Theatre. This was followed by more star appearances in Sydney, Melbourne, Adelaide and Perth.

Who did the photography? Harold Cazneaux (1878–1953) came to Australia from his native New Zealand when he was 11. The family settled in Adelaide, where Harold began working as a photo retoucher in 1897. In 1904, he moved to Sydney; five years later he held his first solo photographic exhibition, which happened to be the first solo photographic exhibition in Australia. He was the leading photographer for the Home Magazine from the early 1920s onward, and his photographs of Sydney over a number of decades have become key images of aspects of Australian history.

I didn't realise she formed her own company.

Hello Hels, Pavlova was a true legend. I have often wondered about the artists who formed their own companies. Some may have been motivated chiefly by money or artistic control, but it takes a certain kind of person to get involved with all that planning, organization and risk, not to mention dealing with all of the headaches which inevitably pop up to plague the impresario. This was one early field, however, in which a number of women proved their business acumen and capability.
--Jim

In the first years of the Ballets Russes, Anna Pavlova did indeed work for Sergei Diaghilev. But it was inevitable that neither of them would take orders, and in any case Pavlova didn’t like modern or non-traditional ballet music. After the first Paris season of Ballets Russes, there wasn’t enough oxygen for the two giant egos, so Pavlova left to form her own company.

I wouldn't have known enough about management of a company Vs being a professional, until my partner sold his medical practices and went to work as an ordinary doctor in other peoples' practices. He used to spend 75% of his time negotiating with the government's Health Department, hiring staff, examining and updating medical equipment etc. Now he spends 100% of his time examining patients and keeping up to date at medical conferences.

But there is at least one big difference. Most ballet dancers could do huge leaps, splits and pirouettes from 18 to perhaps 38 years of age. After that, along with top class tennis players and Olympic gymnasts, most ballerinas would be looking for a quieter career. Perhaps teaching.

Thank you for such ans informative and useful blogs,which is very much useful for me and for everyone.And i hope you will allow me to post my link on your site as it is a great platform.
bollywood news in hindi

My pleasure. What is your particular blogging interest? I can create some links for you.

Famous name and I know little about her. I note you are not entering into the 'in which country did the pavlova dessert originate, Australia or New Zealand'.

I was SUCH a coward :) ... this is all I wrote last time.
Pavlova was either created in a Wellington hotel after her 1926 tour of New Zealand or in a Perth hotel after the 1929 tour of that city. What is certain is the name of the dessert was specif­ically used to honour the Russian dancer and to thank her for exciting ballet-lovers in far flung Australia and New Zealand. 90 years later, pavlova is still a hugely popular sweets dish and an iconic part of the national cuisine of both countries. The meringue, whipped cream, sunny strawberries and summer passionfruit look and taste exotic.

I think she died quite young of a ruptured appendix. Something quite ordinary ,but in pre antibiotics England, fatal!
I wonder if she ever danced with Nijinsky

King George V came for a very important task - to open the new Australian Parliament after Federation. Otherwise the crowds welcoming Pavlova at the Sydney Railway Station would have been the largest any where, any time.

When Ballets Russes attracted its first stars from Maryinsky Theatre in 1909, Diaghilev signed up the best artists, composers, choreographers and dancers. Thus the first year of Pavlova and Nijinsky dancing together must have been amazing! Mind you, Pavlova was a decade older than the young man :)

I cannot find what caused the pleurisy she died from, but I do know she was only 49.

Anna Pavlova must have been one of the most famous people on the planet when she travelled around the world, taking her genius to countries that were usually overlooked on the normal London-Paris-Berlin-New York run. She covered both hemispheres in 1907, 1908, 1910, 1914, 1917 (Central and South America), 1922 (Japan, China, India), 1926 (Australia, New Zealand, South Africa) etc etc.

Hi! I really like your content. Your post is really informative. I have learned a lot from your article and I’m looking forward to apply it with my children and in my class too.

many thanks. I hope the children love ballet :)

Hi i am riya, its my first time to commenting anyplace, when i
read this article i thought i could also create comment due to this good post.

welcome aboard. Do you read history or art history yourself?