I have examined the World's Most Liveable Cities before, in 2016 and 2018, but now January Magazine published the results of The Best Countries analysis. The Best Countries project was part of US News’ Government Rankings initiative, measuring government performance at the state and international levels. Kim Castro, editor of US News explained that  “by collab­or­ating with leaders in data and academia, we were able to help thought leaders, business decision makers, policy makers and citizens understand how perceptions impact their country’s standing in the world."

The report and subsequent rankings were based on how people’s perceptions define countries in terms of qualitative characteristics, but which did they include? And why did the 2020 report focus on perceptions of only 73 nations? See the Best Countries full ranking here.

Regarding Switzerland, the report emphasised that “Switzerland has low unemployment, a skilled labour force and one of the highest gross domestic products per capita in the world, according to the CIA World Factbook. The country’s strong economy was powered by low corporate tax rates, a highly-developed service sector led by financial services and a high-tech manufacturing industry.” 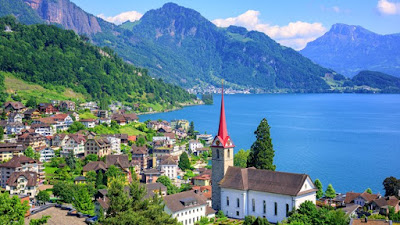 Key themes from the 2020 Best Countries report include:
Switzerland stayed on top overall. Canada moved up to #2 and Japan was #3. Rounding out the top 5 were Germany and Australia. The UK came in at #6, and the US rose to #7.

Respondents painted a bleak picture when asked about nations’ trust­worthiness. While the US was perceived as the most powerful country in the world, data showed it was not perceived as trustworthy. Can­ada was seen as the most trustworthy country, and has been since the first Best Countries report in 2016. During that same time, perceptions of the US as being trustworthy steadily drop­­ped to a record low of 16.3 on a 100-point scale. The UK also fell in this attribute, while Greece, South Korea and Spain improved.

There was a global consensus about the effect of climate change. 87% agreed that climate change was serious. Of the 36 countries surveyed, people in Russia agreed about climate change the least (71%), and Indonesia agreed the most (97%) along with African nat­ions like Nigeria, Kenya and South Africa. But only 60% of re­spondents agreed their country was effectively addressing its effects.

Gender equality was viewed favourably, but there was a gap between perception and reality. 90% of respondents agreed that women should be entitled to the same rights as men. However when asked whether women actually did have the same economic opportun­ities as men in their countries, only 64%  agreed. 69% of people said they view traditional gender roles as important to a functioning society, a perception similar between men (73%) and women (66%).

“This year’s Best Countries rankings continued to show us human rights, diversity, sustainability and free trade were all top of mind for many worldwide, connecting us together. These fundamental topics were vital to a nation’s brand strength and reflected how the quality of life can have a dramatic influence on global perception,” said Michael Sussman, CEO, BAV Group. [I might disagree with these measures being the most important]. 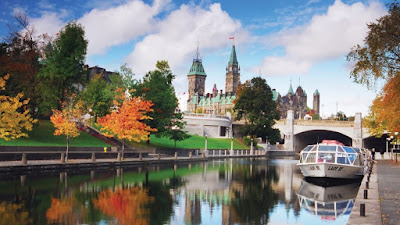 Canada's Rideau Canal, C19th,
made up of a chain of lakes, rivers and canals stretching 202 ks from Kingston to Ottawa.
Canadian Tourism Commission

The 2020 Best Countries methodology used data gathered from a proprietary survey of 20,000+ business leaders; college educated individuals that were at least middle class; and general citizens who were representative of their count­ry. The goal of the Best Countries report was to understand how global perceptions are related to investment, foreign trade and tourism of a nation, David Reibstein, professor of marketing at Wharton, correctly noted. But in my opinion,  Best Countries should also measure peace for the residents, democracy,  universal health care, adequate social housing, unemployment rates, free schooling for all children etc

So I checked Quality of Life. Beyond the essential ideas of broad access to food and housing, to quality education and health care and employment, this measure may also include intangibles such as job security, political stability, individual freedom and environmental quality.

For Quality of Life

Fascinating. Even the general Australian population are out of step with the world view of the seriousness of climate change. The different criteria for Quality of Life did rather alter the results for some countries. I am surprised that in that survey Germany is so low at number ten, and I am surprised Austria is not in either list.

Re quality of life Norway, Sweden and Denmark deserve to be at or near the top. Their schools, hospitals, homes and green environments are top notch.

Switzerland and Germany were right up there, as expected, but I don't know the first thing about low corporate tax rates, highly-developed service sectors led by financial services, high-tech manufacturing industries, limiting large technology corporations, investment, foreign trade etc. Clearly banks, trade and finances were more important in this Best Countries Report than I would have hoped.

quite right... women, children, migrants, greenies and working class families seem to be treated much more inclusively in Norway, Sweden and Denmark than in other countries I have lived in or visited.

By the way, I wonder if Quality of Life includes some measure of temperate climate. I would live in Sweden in a heartbeat if it wasn't freezing cold in winter.

Hello Hels, These ranking lists can be fun but should not be taken too seriously, since so much depends on individual taste and opinion. I have seen lists of the "best" cities in the U.S., and the top-rankers are usually places I would not be seen dead in!

It seems that many of those favored countries have a relatively low density of population--if lots of people moved there, I'm sure things would change quickly.

It is too bad about the U.S. losing so much of its prestige, but unfortunately it is for good reason. I cannot tell you how bad I feel about not only the current administration, but most importantly the lack of serious opposition to it.
--Jim
p.s. I wonder if Taiwan was even considered in these listings?

methodology is everything. The Global Liveability Survey assessed 140 of the world’s major cities in fixed categories: stability, education, universal health care, infrastructure (particularly public transport), culture and environment. The Liveability results came from published city and federal reports, not from “collab­or­ating with leaders in data and academia". So I am not even sure which variables were chosen by the 2020 Best Countries Report, or their reliability.

I cannot see Taiwan in the Best Countries full list but then only 73 countries in the world were included. See https://www.usnews.com/news/best-countries/overall-rankings

Goodness, I’m remembering when Melbourne was getting the kudos for World’s most liveable city!

Mostly the changes from year to year are small. But I suppose change might occur quickly e.g one earthquake, pandemic or terrorist bomb

Hi Hels - so subjective aren't they ... but I'm sure I'd essentially agree. I do confirm that Canada is pretty amazing ... while where we'll end up in a few years remains to be seen - not easy for anyone without a good job, or extra cash around ... cheers Hilary

You are spot on for our own preferences... totally subjective. I have tended to be happiest spending lots of time in countries where I have close relatives - Israel, Canada and Great Britain. Joe is in love with Japan.

But the variables used in the The Best Countries analysis and in The World's Most Liveable City comparison should have been totally objective!