In 1893, New Zealand became the first nation on earth to enfranchise its female citizens. Now for another New Zealand first.

New Zealander Ellen Dougherty was born at Cutters Bay, Marlborough in 1844. Her father had been a whaler before estab­lish­ing a whaling station at Port Underwood in Marlborough Sounds. Then the family moved to Wellington where dad was ap­pointed harbour pilot. They lived in the pilot-house at Palm­er Head near Lyall Bay, where Ellen and the other children spent their time in boats and expl­oring the bush on horseback. Education was home-based.

After her father's death in 1857, Ellen and siblings were raised by their mother, who opened a boarding house in Wellington. Ellen worked first in a Wellington pharmacy and then, from 1885, she worked at the Wellington District Hospital. She completed a cert­if­ic­ate in nursing in 1887, studied elementary anatomy and physiol­ogy, and became head of the hospital's accident ward.

In 1893 Ellen became matron of Palmerston North Hospital. On arrival she found very little money av­ailable for providing bas­ic materials for the hospital. Her priority was to ensure a suf­fic­ient supply of linen because, pre-antibiotics, hospitals req­uired clean linen to help prevent infection. 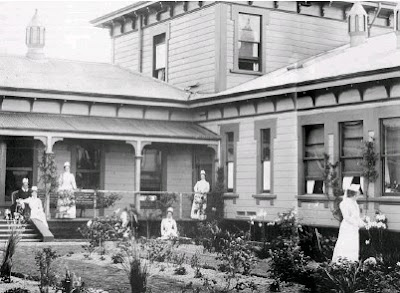 Matron Ellen Dougherty had the assistance of two nursing staff, whom she brought from Wellington, and two part-time med­ical off­icers. The nurses worked demanding 12-hour shifts and more, because Palmerston North was then a centre for the North Island's main trunk railway line, for bush-clearing and for saw-milling. Accid­ents were common and doctors were not always avail­able. So Dough­erty had to set broken limbs, dress wounds and even amp­utate limbs. And she ran the hospital's dispensary at all hours.

In 1899 she was formally registered as a pharmacist.

At her retire­ment in 1908, Palmerston North's hospital had grown to twice its original size when she had first become the chief admin­is­t­rator. A single lady, Ellen Dougherty retired to Carterton to be near members of her family. She died there in 1919.

So my biggest question is “why did a hardworking but ordinary nurse like Ellen Dougherty become so famous”? I would have expected Britain under Florence Nightingale (1820-1910) to be the first nat­ion to register nurses, but Nightingale strongly opposed state registration because:

1. nurses in the late 1880s and 1890s were not educated well enough to be registered as a profession.

2. the proponents of state registration wanted to exclude working-class nurses, in order to make nursing a profession for ladies only. Nightingale wanted competent working-class women.

3. Registration proponents did not distinguish adequately between medicine and nursing

5. she disliked the dishonesty and lack of profess­ion­al ethics expressed by the campaign's leaders.

The training of nurses in New Zealand had also been rather ad hoc. During the 1880s some hospitals began to offer training and acc­omm­odation on-site, to attract more respectable women into nurs­ing. As more women entered the profession, there was increased demand for improved conditions for both nurses and their patients. 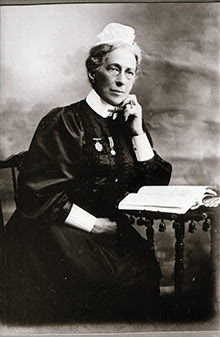 A major advocate for professional nursing in New Zealand was Grace Neill. This Scottish woman had been trained in nursing in Charing Cross Hospital London, then emigrated to Aust­ralia and later New Zealand. For a number of years, Mrs Neill trav­elled around New Zealand visiting hospitals, but transport was poor and communities were isolated. Standards were so variable that Mrs Neill strongly recommended standardised training services.

Grace Neill was made Assistant Inspector in the Department of Asyl­ums and Hosp­it­als from 1895 on. In 1899, she spoke at the congress of the International Coun­cil of Women in London, calling for a national system of regist­er­ing trained nurses. Those who passed a final exam after undergoing training could then be regist­ered.

After 2 years of camp­aign­ing, the Nurses Registration Act 1901 was enacted, followed by introduction of State Examination throughout the country. Mrs Neill had drafted the necessary regulations, defined the curriculum and appointed the examiners.

Thus New Zealand became the first country to have formal legislat­ion for the registration and regulation of nurses. As in all New Zealand acts requiring professional registration, the grand­father clause allowed registration of any nurse with 4+ years experience.

In Jan 1902, Ellen Dougherty was the first nurse in the world to be formally registered!

Nurses were trained in a 3-year training scheme in hospitals, and sat an examination at the end. Successful candidates were reg­is­tered. Nursing became more specialised; women could train as a general nurse, psychiatric nurse or nurse who specialised in intellectual disabilities.

Until 1904 most midwives received no formal training. Government concern about high maternal and infant mortality rates led to the Midwives Act 1904. Soon midwives were trained at seven St Helens hospitals throughout New Zealand. 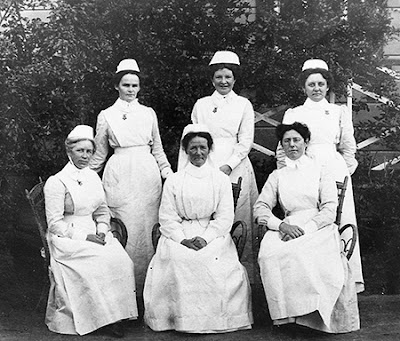 Read the excellent Review of the Historical Development of Nursing in New Zealand.

Hi Hels - what a fascinating and interesting post to read. Congratulations to Ellen ... thanks for letting us know about her and the early Nursing System in NZ ... cheers Hilary

Hello Hels, Medical care and standards improved so much in the late nineteenth century that we can understand some of Nightingale's concerns about allowing inadequate caretakers to be registered--especially with the tradition of grandfather clauses, which may have had the effect of making official some questionable or outmoded practices. It's funny, but given how many quack doctors were around at that time, it is hard to imagine a quack nurse--just one whose training was too scanty or too antiquated. Much of the time it was (and is) the nurses who spent the most time with the patient.
--Jim

A really interesting history, thank you :-)

In 1918 Britain passed the Representation of the People Act 1918, giving the vote to all men over 21, and to women over 30 who met minimum property qualifications. It wasn't until 1928 that the vote was given to all citizens over the age of 21 on equal terms. 1928!? I realise the vote and nursing registration are two separate issues, but Britain wasn't speedy in women's affairs, was it?

Congratulations to Ellen; she was the hardest working woman I know about.

And congratulations to Grace Neill. Not only did Grace trav­el around New Zealand visiting hospitals and documenting the very different nursing standards she saw across the country. She then worked hard for standardised training services across the country, followed by formal professional registration.

Agreed. It was true then, and is true now that the nurses do most of the patient care in hospitals.

But quack doctors were more in the days of pharmacist "general practitioners", barber "surgeons" and nun "nurses". By 1859 British doctors were recorded on the National Medical Register, and in New Zealand a decade later. That didn't mean that the medicine they offered was high quality or up to date, but at least there was some accountability in the system.

I love holidaying in New Zealand and I am fully aware of their vital role in female suffrage, but we clearly all have a lot more to learn.

While in some ways New Zealand can be conservative, in so many ways it's progressive and here is another example along with race relations, action on climate change and banning live animal export, to name a few. Australia is really behind the eight ball at times.


This blog is very informative and interesting, the way you described the good thing of your blog and other cities where the real estate sector is booming day by day is incredible especially about the 2 BHK flat in kolar road, 3 BHK flat kolar Road and 4 BHK flat in kolar road which are in high demand now a days as it is one of the developing areas. of Bhopal.

true true. I was particularly proud of NZ's climate legislation that was passed by all the main parties in the NZ parliament, committing the nation to reduce its carbon emissions to zero within 3 decades. Not only can NZ meet its own commitments under the Paris climate accords; it can be a role model for the rest of the world. Not bad for a small nation.

thank you. What is your particular interest in New Zealand history?