At university, I loved medieval art and architecture, but it was 100% Christian in patronage and in iconography. There had to be more! It wasn't until my first trips to Israel, Jordan, Egypt and Turkey that I discovered (and collected) Islamic, Jewish and other Oriental art forms. Even better, my sons married women whose parents came from Damascus and Alexandria.

The British Museum’s special exhibition is called In­­s­pired by the East: how the Islamic World Influenced Western Art. Until the end Jan 2020, it is examining how West­ern visual arts have been inspired by the Islamic world for centuries. Known as Or­ientalism, this rep­res­entation of the East in Western art oft­en blurred the line between fantasy and reality. In paint­ing, decorative arts, interior design and arch­it­ecture, the works depicted or referred to subjects and styles from the Orient.


The Orientalist art movement peaked in the C19th and was best known for its production of impressive oil paintings and works on paper. But this movement had started back in the C15th and continued to be referenced in art. It influenced the production of a wide range of works of art inc­lud­ing ceramics, metalwork and photography, and extended more widely to include theatre, architecture and music.

Palestinian-American scholar Edward Said’s influential text “Orientalism” brought critical attention to the subject in 1978, questioning the ways in which the West saw and misrep­resented the East in culture. In it he criticised the over-romanticised and inaccurate views the West presented of the Orient, particularly through literature. He defined the Orient as being the place of Europe’s greatest, richest and oldest colonies, the source of its civilisations and lang­uages, its cultural contestant, and one of its deepest and most recurring images of the Other. This exhibition, however, focuses only on the art movement of Orientalism. 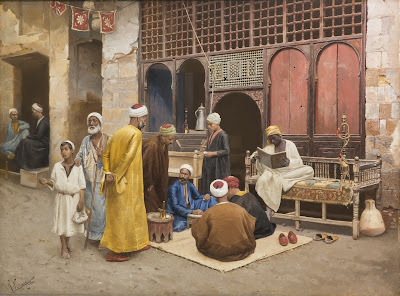 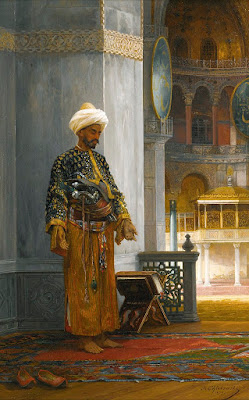 Stanislaus von Chlebowski,
a Polish painter with Russian and Turkish connections.
At Prayer in Hagia Sophia, 1879

Engage with such critiques by recognising misrepres­entations ... while identifying a long, rich his­t­ory of influence and exchange in both directions. Indeed from c1500, as Europeans became both increasingly curious and aggressive in their dealings with outsiders, there was a sust­ained awareness of the empires of the Middle East. These Eastern neighbours were the Safavid Empire (1501–1722), cent­red around modern Iran, and the Ottoman Empire (c1300–1924), which comp­ris­ed modern-day Turkey, most of SE Europe and the Arabic-speaking lands. Likewise, European traders and dipl­om­ats were considered an "exotic other" by people in the Middle East. At a time when relations between Europe and the Middle East were more evenly balanced than in later periods, this was a period marked by exchange and fluidity.


This can be seen in the imitation of certain styles in Iznik plates from the C17th, a centre for high-quality pottery prod­uction for centuries. The distinctive floral designs were also popular on tiles that decorated the inside of buildings during the Ottoman period (14th–C20th) eg see tiles made by English designer William De Morgan in the C19th. He was influenced by Middle Eastern ceramics and designs, creating floral motifs that appeared in fashionable ceramics, stained glass and furnishings. 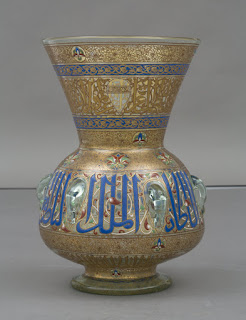 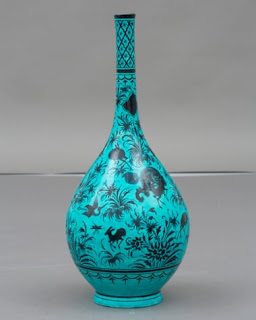 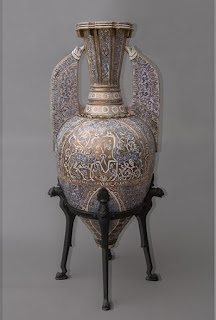 Bottle in the Persian late Safavid style, glazed and lustre-painted ceramic,
Made in France, late 1800s.

As Europeans increasingly looked out to the Americas, Af­rica and Asia from the 1500s, they developed new ways of id­entifying and disseminating information about the people they met. Costume books became a popular way of classifying diff­er­ent groups according to their dress, from sultans and mystics to dancers. But these portrayals were often based on stereotypes that only helped perpetuate the mistakes in Europe.

The best-known artistic output of the Orientalist art movement was a huge body of paintings by Western artists. Many of the artists travelled to the places they depicted: Const­ant­inople aka Istanbul, Jerusalem, Cairo or Marrakesh. Others trav­elled no further than Paris or Vienna, but used a mixture of photo­s and imagin­at­ion for inspiration. Recurring im­ag­es incl­uded everything from images of daily life to imagined scenes of the har­em. Int­er­est in Orientalism developed toget­h­er with European col­onial interests in the Middle East, which gave soldiers, trad­ers and artists ready access to the region.

This exhibition reveals that Orientalism convered many typ­es of visual and decorative arts with origins in Europe, North America, Middle East and North Africa. These arts high­light the old tradition of influence and exchange between West and East, whether gained through diplomatic en­counters, spoils of war, or travel to the Holy Land and beyond.

Although Orientalism remains a highly charged and contested term, with Orientalist arts and crafts rapidly declining in popularity since the 1940s, its visual language remains a pot­ent resource for artists today.

In your lectures I remembered French and British artists painting Orientalist scenes like Ingres, Delacroix and Holman Hunt. But not Czechs and Poles. A very seductive style.

In 1809, the French government started publishing a huge series of books called Description de l’Égypte with every possible theme: topography, architecture, monuments and natural life. The Description de l’Égypte aimed to document the culture of this region for the scholars back home, intentionally having a profound effect on French architecture and decorative arts. Ditto Algeria in 1830, Tunisia later in the century and Morocco.

French artists, writers and craftsmen in all media responded with great excitement to their nation's colonial values, as did British, German and Italian artists respond to their own growing colonial empires. Read "Orientalist Art as a Means of Cultural Imperialism":
https://www.academia.edu/6468395/Orientalist_Art_as_a_Means_of_Cultural_Imperialism

Hello Hels, Orientalism was so colorful and so exotic that it perfectly suited the taste of the nineteenth century. I was lucky that at college I could daily walk by Henry Austin's impressive Egyptian gates for the Grove Street Cemetery:

A little further away was the Willis Bristol Moorish Villa, also by Austin, who seemed to love every eclectic style:

Hi Hels - you've perhaps prompted me to get up to the British Museum to see Troy and now your post here on the Islamic World - I have yet to decide ... it'll be next year. There's so much to learn ... especially for someone like me who has exceedingly little knowledge about art of any description ... still I keep looking. Thanks for a great introduction ... cheers Hilary

All three are pieces of great beauty but especially the first and last.

Orientalism was indeed very colourful and very exotic, totally unlike anything Europeans had ever seen in their own countries.

But I am not sure it suited 19th century Western taste.. I think artists and composers etc were taking a real risk in the first decades of Orientalism in France etc. The Church and Parliament always insisted that Christianity was superior to Islam.

I would certainly join you, if I could be in the UK before the end of Jan 2020. Over the years I have seen many Orientalist paintings, textiles, architecture and decorative arts, but this time the British Museum is looking with new eyes. Not how the Western World colonised and civilised North Africa and the Middle East, but how the Islamic world influenced Western Art.

Have a look at https://www.marcmaison.com/architectural-antiques-resources/orientalism for bowls, vases and platters that have amazing colours, shapes and patterns. Those French decorative artists were as talented as the Oriental artists who influenced them.

Now this is some pretty interesting vase. I am fan of color and like turquoise and black.
Coffee is on

I used to collect "smalls" i.e decorative arts because paintings were out of the question financially. So I collected smalls because the artists could display their skills with colours, materials and shapes beautifully. Mind you, now even the beautiful Orientalist smalls achieve VERY high prices. An Islamic-inspired opaline vase, made in Vienna in the 19th century, went for GBP £7,000 / USD $9,050 / AUD $13,000.