With his trademark wax moustache and pleasure from giving lect­ures in bizarre settings, Salvador Dali (1904–89) thrived on court­ing con­t­roversy and enjoyed a wildly eccentric lifestyle. Throughout his life, his detractors said the man was more concerned with cul­tiv­ating his own avant-garde im­age than the quality of his artistic output. Friends staunchly defended the Spanish painter, say­ing that he simply lived his brand of surrealism as much as he painted it.

The 2nd film, Dali, was to be directed by British film-maker Sim­on West, and to star Antonio Banderas as Dali, with Catherine Zeta-Jon­es as his hot wife Gala. It would explore how the painter conqu­er­­ed America and the world with sex, sin and sur­realism, only to succumb later to world wide scandal and misfortune. But was the film produced?

The third and most cont­roversial film, Dali & I: The Surreal Story, came from a 2008 book by little known Belgian art dealer, Stan Lauryssens (born 1946).  His book alleged that most of Dali’s works were faked and were done so with the artist’s approv­al. This sent shock waves through an art world which was long used to str­an­ge Dali stories. 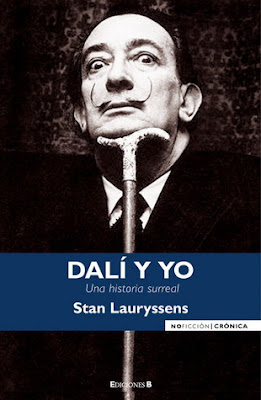 The Salvador Dali Foundation, which controls Dali’s estate, vig­or­ously denied many of the claims made in the “Dali & I” book, and threatened to sue Lauryssens. When the book, which has been transl­ated into 33 lang­uages, was released in Spain, the Foundation said: The contents of “Dali & I” lack the most minimal credib­ility and were only part of a promotional campaign for the book and the film. Of course Hollywood was going to be attracted to this shock­ing book!

Long before he entered the fake art world, Lau­r­yssens had been inv­olved in many other dodgy activit­ies. He later moved into journalism where he pretended to interview a host of Hollywood celebrities for a Belgian magazine. In 2 years he had fake-inter­viewed every major Hollywood star, including Elizabeth Taylor and Marlon Brando.

In 1972 Lauryssens turned his attention to Salvador Dali. He made up a great story about how Dali and Walt Disney were working on a cart­oon together. That story caught the attention of a shady investment group in Belgium who assumed Lauryssens was a Dali expert and hired him as a fine art dealer. So, at just 25, Lauryssens found himself flying around Europe buying up Dali paintings, despite having no prior experience in the world of fine art.

Lauryssens thought that some Dali’s less popular stuff was dis­taste­ful to look at, so it was very hard to find buyers. Eventually he was introduced to some of Dali’s entourage who said the best mon­­ey could be made in selling fakes because they were the items that tended to have his most popular elements, like the melting clocks. The more he indulged in fake Dali works, the more Laurys­sens uncov­ered a world where fake prints, sculptures and litho­gr­aphs were created by the people closest to Dali. In fact probably 75% of all the works attributed to Dali were not done by him.

In a career spanning more than 50 years, Salvador Dali was able to churn out thousands of artistic pieces - paintings, scul­ptures, prints, lithographs and photographs. And from the 1960s on, the fakes were clear­ly with the painter’s alleged approval since Dali needed a truckload of cash each month to fund his lavish lifestyle. In any case, Dali readily admitted he had made enormous sums of money by signing hundreds of quick sketches and lithographs which would then sell for huge profits. 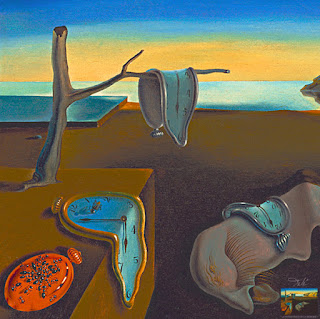 Persistence of Memory, 1931
by Salvador Dali
a surrealistic image of melting pocket watches, at MoMA.

Dali himself was an enormous fan of film which he believed was a superb medium for surrealist art. He didn’t create films him­self, but he contributed to other peo­ples’ surrealist film-making from 1930 on. Dali coll­ab­orated with Alfred Hitchcock to produce the famous dream sequence in his 1945 thriller Spellbound. Hitchcock called on Dali to use his surrealist vision to build a bizarre set that could re­­present a dream. A 1946 collaboration with Walt Disney was aban­d­oned only 3 months into production, after Disney ended the pro­ject. "Destino" was only resurrected and redone by Disney’s nephew, Roy, and a team of French animators in 2003, long after both Disney and Dali had died!

In the early 1980s, before his prison stint, Lauryssens moved next to Dali in his seaside villa in Catalonia. The dealer said that Dali had lost his hair, his stomach was swol­l­en and his limbs shaking. It was all a far cry from the flashy show­­man.

Lauryssens was finally tracked down by Interpol in the late 1980s and served two years in gaol for selling forgeries. He did not deny his part in the art crimes. And in the end, Lauryssens made and lost millions in modern art, selling Salvador Dalí fakes.

Yet the surrealist's work must have been a hot commodity for shady businessmen, looking to launder their cash. After all, when Dali died from heart failure in 1989, his estate was worth a huge $87m!

Did the Salvador Dali Foundation ever sue Lauryssens for lying throughout his book Dali and I? Probably not.

Hello Hels, People who buy inferior works by famous artists at inflated prices are asking to be ripped off, as are those who purchase too good to be true masterpieces that suddenly appear on the market.

The problematic association of Dali and Lauryssens is a good example of getting judged by the company we keep. However, if Dali had a general reputation for sharp commercial practices, I can see why the foundation would not want to look into certain accusations too closely.

Of course, even the fakes can be taken as a tribute to Dali's originality and merit, and there is much to wonder at in Dali's work. I particularly admire Dali's film collaborations with Bunuel, Un Chien Andalou and L'Age d'Or.
--Jim

When “Dali & I” book was published in 2008, The Dali Foundation had a group heart attack and threatened to sue Lauryssens back to Belgium. Yet Lauryssens had had a dodgy track record going back decades.

Sheeesh.. which criminal behaviour did the Dali Foundation think Lauryssens was gaoled for, for two very long years? Because Lauryssens and Dali sold Dali forgeries, that is what.

I too can see why the Foundation would not want to look into the accusations too closely, yes.

The Salvador Dalí Foundation was a private cultural institution founded in 1983 by Dalí himself, to promote and protect _his own_ artistic and intellectual legacy. Dali closely controlled the Foundation in person from 1983 until he died in 1989. So I would not have expected the Foundation to realistically be suing Lauryssens in an open court.

Rather disappointing to learn but undoubtedly he was a larger than life character. That you have written about him, films have been made, books written and exhibitions of his art are popular proves it is often about the person and not the art.

larger than life, for sure! But Dali (b 1904) was famous only partially because of his iconic art. So why did he intentionally use shock and scare tactics to ensure viewers' and critics' attention? I am guessing Dalí was already disturbed as a teenager - he was suspended from the Academy in 1923, arrested and imprisoned, then expelled from the Academy shortly before his final exams.

Whether Dali created his own art or it mainly came from fakers, how did he own an estate worth $87 million at his death?

good question. AP News noted that Dali had heart problems and had been confined to a wheelchair since suffering severe burns in a house fire in 1984. He was fed through a tube for the rest of his life and did no more work after that date. Yet his estate was still selling his work - the highest price paid for a Dali was $2.3 million by a Japanese buyer paid in 1987 for ″Gala Looking at the Mediterranean Sea" c1975.

Dali acknowledged that, from 1964 on, he was forced by his guardians to sign blank canvases. Later, even after his death, they could be used in forgeries and sold as Dali originals.

Hi Hels - interesting to read ... I didn't know much - but obviously Dali was exploring a great deal ... I see your comment above about his end - sad. Thanks for this - cheers Hilary

the book was an accidental find and even if it contained some of Lauryssens' biases or mistakes, it is well worth reading. Dali certainly promoted his own larger-than-life character.