As Rachel Serkin showed, from 1881 until the USA changed its immigration laws, 2.5 million Jews em­igrated to the USA from Eastern Europe. Over a third of them set­tled in New York's Lower East Side, seeking religious freedom & econ­omic opportunity. Political activism was familiar. Garment workers were striking for better wages and safer working condit­ions. The neighbourhood's progressive socialist newspaper, the Jewish Daily Forward, was the nation’s leading foreign language newspaper.

In America, Jewish families wanted to purchase and consume kosher meat of course. And by 1900 the Lower East Side was home to 132 kosher butcher shops, their produce being delivered by rail from Chicago’s meat houses. In 1902, the three largest of these meat packing houses merged to form the National Beef Trust of America, securing control of packing houses in three cities and setting the prices (of kosher and non-kosher meat) at their own discretion.

The Beef Trust was just one of many Gilded Age monopolies operating without regulation. In early May 1902, the Beef Trust raised the price of kosher meat by 50%, from 12 to 18 cents a pound. Small meat shops tried to fight the Trust, but they were forced to pass the price hike on to customers. 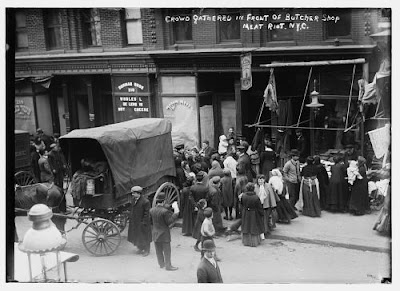 Immigrant women were most affected by the increase because they had the home and family responsibilities, plus managing household expen­ses. In Eastern Europe, consumption of kosher meat on a weekly bas­is had been rare, whilst in the US women wanted to feed their child­­­ren a richer diet. But buying non-kosher meat was not an option.

Instead of turning to their rabbis, the women turned to politics. That is, they employed protest tactics borr­ow­ed from the radical pol­it­ical movements that had been used locally. In May 1902, the Lower East Side’s Jewish house wives took to the streets in a meat-hurling frenzy. The women launched a door-to-door campaign, urging their neighbours to not eat meat.

Two women called a mass meeting to plan a boy­cott. All over the Lower East Side, women began passing out Yid­dish flyers, urging other women to consider their children’s meat needs. Within days, thousands of East Side women participated in the boycott.

A noisy crowd [mostly women] patrolled the neighbourhood and on May 15th, thousands of them descended upon the neigh­bourhood butcher shops. Newspapers reported that women were smashing butcher shop windows with bricks and wasting meat by throwing it into the street, soak­ing it in kerosene and setting it alight. Anyone caught carrying meat was considered to be a picket-crossing scab! Amid the chaos, the police were called and 70+ women were arrested and gaoled for disorderly conduct. 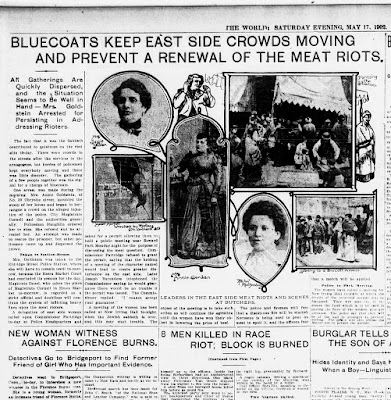 The riots contin­ued for days. Orthodox Jews and Socialist Jews, who disagreed on most things, fought side by side. The New York Times reported in horror that women, armed with sticks and sharpened nails attacked the police. “Old shoes, brushes, combs, brooms and every other imagin­able portable article of household use rained down upon the pave­ment. One police­man had an unpleasant, moist piece of liver slapped in his face.”

The protests dominated the streets, but the community would not have expected the women to make their mark on the synagogue. The synagogue was the sphere where men and women had to remain sep­arate. Two women entered the main sanctuary at Eldridge St Synag­og­ue and ascended the bimah, a holy place in a synagogue. One of the women gave a fiery speech about meat prices and asked the congreg­ation to join their cause. The congregation was instantly in uproar! And women streamed out of the balconies during the Torah reading, to bring attention to the cause.

Women in the community went door-to-door, raising bail money. Then male communal leaders decided to get involved, organising a meeting of their own and informing the women that they should now back off. They pub­lished a flyer saying “brave and honest men are now aiding women!!”

The Times called the 1902 strikers “a class of people… who are engaged in this matter have many elements of a dangerous class. They are very ignorant… They do not understand the duties of the rights of Americans. The rioters were animals with “no inbred or acquired respect for law and order as the basis of the life of the society into which they have come. … The instant they take the law into their own hands, the instant they begin the destruction of property and assail peaceable citizens and the police, they should be handled in a way that they can understand and cannot forget.” The police, on the other hand, were seen as “keeping their heads perfectly. They did all they could to prevent serious injuries to those they strove against, and used their sticks more to frighten than to chastise. The police were remarkable.”

Only local papers like Forverts declared “Bravo, Bravo, Bravo, Jewish women! These women had embraced modern tactics as a means of maintaining an Old World tradition”. To many, there was nothing more American than that.

In June, the Beef Trust lowered their prices! Then the butchers dropped theirs down to a more reasonable 14c a pound. The women had won! Later in the year, President Roosevelt enacted laws against the Beef Trust, leading to the eventual dissolution of monopolies and ushering in a new era of regulation. 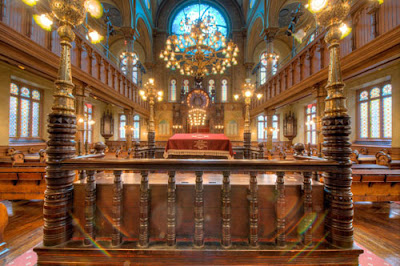 The Kosher Meat Boycott of 1902 was not the last time Jewish women took to the streets in search of justice; there was the 1909 shirtwaist strike and a second meat boycott years later, in May 1935. But it was their political activism in 1902 had revealed the complex roles that immigrants & women played in social history. Parts II and III to follow.

You may like to read Paula Hyman’s work “Immigrant Women and Consumer Protest: The New York Kosher Meat Boycott of 1902” (in The American Jewish Experience, Jonathan Sarna ed. 1997)

What an extraordinary tale. I guess such tactics would not have worked against the Nazis.

Tackling the Beef Trust would have been a waste of energy. I was sorry for the little butcher shops whose stock was damaged (my dad had a kosher shop) but the women had to act before their children went hungry. Why do the big guys always get away with it?

the women's movement, civil rights movements and labour movements found themselves pitted against the government, military, industrial world and police. Individual protesters, even the bravest, were doomed to have their heads beaten in, shot or gaoled.

So they used whatever tactics were available, cheap and safe eg protest marches, public speech making, petitions to Parliament etc. Even if these tactics were not terribly effective.

The Gilded Age monopolies, the robber barons of big industries like oil and steel, were referred in the literature as operating without regulation in the USA. So tackling the Beef Trust, even if the women could have got to Chicago from New York, would have been like throwing pebbles at a Colossus. A waste of time, correct.

The poor butchers in the Lower East Side did all they could to protect the struggling families. The butchers didn't deserve being harmed.

Thank you. I don't like meat, so that was not the impetus behind this post. But I am fascinated by the historical rights of women, gays, people of colour, working class families, migrants and refugees etc. We believe our generation is so sophisticated and educated, yet it was only in the last 100 years that these battles have been fought. And not necessarily won ...yet!

Watch the next two posts on other brave American women fighting their own battles.

Thanks, Hels, this is something I didn’t know about. I must check out that book you mention.

Hello Hels, My comment of yesterday disappeared into the void, but I was noting how these Jewish women of 1902 were fighting against being imposed upon by powerful forces that controlled their material world. Yesterday we saw an update of this--people all over the world fighting against the environmental disaster that has been made of this world in the interests of profits for the few. I admire both groups of people for insisting upon their rights and improving the world at the same time.
--Jim

I had forgotten that American workers, women and religious groups had once been progressive and proactive. Brave in the face of opposition, of course, but also strongly committed to their causes.

Hyman's paper shows how these events brought migrants' and Jewish women’s history "into the mainstream" and led to other important activist activities. You will find it uplifting.

I agree. But individuals and groups paid, and still pay a terrible price for fighting against powerful forces. As you will see in the next post on brave Catholic women, they might have been refused Holy Communion in their local parish church :(

During the Vietnam War, student protesters often got police records that lasted for life. Or were expelled from university after sit-ins. Yet without hundreds of thousands of heroes, the world would never be improved.

The restored historic Eldridge Street Synagogue, a 19th-century landmark with stunning architecture that initially opened its doors to a wave of Eastern European Jewish immigrants, recently reopened as a vibrant arts and education center for all ages and backgrounds, with exhibitions and tours of the restored synagogue. The Harbin China: Past/Present Exhibition
will end on October 4, 2019.

Interesting information. I had not heard of this history before.

It will be interesting to see if women and young people get angrier regarding Climate change .
When children lives and welfare are at risk women get active and they should be worried now , very worried.

the photos of the synagogue and museum look wonderful, many thanks.

I saw this Museum post and wondered if the meat protests were featured in your displays.
https://www.eldridgestreet.org/history/becoming-american-on-the-jewish-lower-east-side/

"The famous kosher meat boycott of 1902, instigated by women who interrupted Saturday morning services throughout the neighbourhood to decry the 50% increase in meat prices, would have been an unthinkable action to be taken by women in Eastern Europe. Here the women utilised the models of the American labour union and women’s movements to ensure The Eldridge Street congregation's constitution that families could continue to practice their religion the way they had done back home".

me either. My socialist grandmother said activist women would never have been allowed into USA at the turn of the century; they went instead to the UK, France, Palestine or Australia. And I believed her utterly, until reading the Paula Hyman paper :)

I am full of admiration for the women and young people protesting sluggish governmental progress on climate change. The old men currently in parliament will be dead by the time our water supplies dry up and our crops burn to death in summer.

But there is one difference. Governments may not be as passionate about climate change as they should be, but parliamentarians are not going to get brutal police to break up the marches, imprison the women or beat them over the head. Nor are the husbands or churches going to make the women pay a great price (I hope).