I was lecturing in a series on “The Silk Road and Marco Polo”, suggesting that Europeans were not as sophisticated in trade, capitalism and tran­s­port systems as the Asians were. But I fell apart suggesting that Marco Polo (1254-1324) was history’s most travelled and best documented medieval man. In fact the Christian Venetian, Polo, trailed far behind the Muslim scholar Ibn Battuta (1304-68).

Ibn Battuta’s family was of Berber origin and had a history of service as judges. After receiving an education in Islamic law, the young man chose to travel. He left home in 1325, at 21, and set off across North Africa. In Egypt, he studied Islamic law, and toured splendid Alexandria and Cairo. 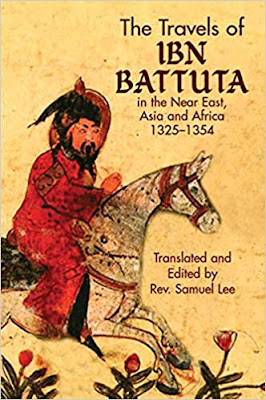 His journeys were mostly by land. To reduce the risk of being attacked, he usually chose to join a caravan. He followed a curvy route east, first making his way through Syria. As he always did in Muslim-controlled lands, he relied on his status as an Islamic sch­olar to win hospitality from locals. No wonder he loved travel, of­ten being showered with fine clothes, horses, concubines and slaves.


In 1326 he continued exploring the lands of the Middle East, sail­ing down the Red Sea and on to Mecca and Medina, where he took part in the hajj. Ibn Battuta’s travels might have ended there, but having completed his hajj, he continued wandering across the Muslim world. He crossed the huge Arabian Desert and travelled to Iraq and Iran, and later mov­ed north to what is now Azerbaijan.

In 1330, he set off again in an unexpected direction, down the Red Sea to Aden, along the coasts of Kenya & Tanzania, trekking across Yemen and sailing to the Horn of Af­rica.

Battuta crossed the Black Sea and entered the domain of a Golden Horde Khan in Turkey. In 1332 he was welcomed at court and later accomp­anied one of the Khan’s wives to Constant­in­ople. Bat­t­uta stayed in the Byzantine city for a month, visiting Hagia Sophia and even receiving a brief audience with the emperor. Having never lived in a large non-Muslim city, he was stunned by the large number of Christian churches within its walls.


Battuta next travelled east across the Eurasian steppe before ent­er­ing India via Afghanistan and the Hindu Kush. Arriving in Delhi in 1334, he won employment as a judge under Muhammad Tugh­luq, a pow­­erful Islamic sultan. He was warmly greeted by the Sul­tan of Delhi, and was soon appointed to the position of a judge.

Battuta spent 8 years in India, married and fathered children, but he eventually became anxious about the sultan, who was known to maim and kill his enemies with elephants. The chance to escape arrived in 1341, when the sultan selected Bat­t­uta as his envoy to China. The Moroccan set out a large caravan loaded with gifts and slaves.

But the trip to the Orient proved to be the worst part of Battuta’s odyssey. Hindu rebels in India harassed his group during their journey to the coast, and Battuta was kidnapped and robbed. He managed to make it to the Keralan port of Calicut, but on the eve of the ocean voyage, storms sank the ship and killed his party.

The disaster left Battuta stranded and disgraced. He was loath to return to Delhi and face the sultan, so he made a sea voyage south to the Indian Ocean archipelago of the Maldives and Sri Lanka. He remained in the idyllic islands for the next year, taking several wives and again serving as an Islamic judge. But following a falling out with its rulers, he actually made his journey to the Mongol court of China on merchant vessels through Southeast Asia. In 1345, four years after first leaving India, he arrived in bustling Chinese ports.

Battuta loved Mongol China and praised its natural beauty, but he also thought its locals were infidels. Distressed by the unfamiliar customs on display, this Islamic traveller felt at home with the country’s Muslim commun­ities but knew little about huge cities like Hangzhou. Battuta claimed to have roamed as far north as Beijing and crossed the famous Grand Canal, but I am not sure.

Having reached the edge of the known world, he finally faced home, arriving back in Tangier in 1349. Both Battuta’s par­ents had died by then, so he only remained for a short time before moving onto Southern Spain.

Battuta probably didn’t kept a complete journal while travelling. But when he finally return­ed to Morocco in 1354, the country’s sultan ordered him to compile a travelogue. He spent 2 years dictating his story to the writer Ibn Juzayy. The result was an oral history called My Journey/Rihla.

My Journey was part-autobio­g­raphy and part-travelogue. Did Ibn Battuta visit all the places that he described? In order to provide a complete description of the Muslim world, Ibn Battuta probably relied on hearsay evidence and accounts by earlier travellers. He reported that he experienced culture shock in some of the regions he visited, especially when the local customs of recently converted people did not fit his orthodoxy. Among Turks and Mongols, he was astonished at the way women behaved, spoke and dressed. 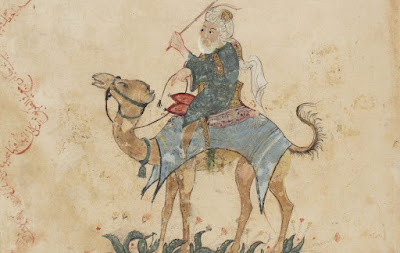 His chronology was often confused (as is my post), and while he wrote great desc­riptions of Anatolia in Asia Minor, he wrote poorly on Iran. Yet the book now stands as one of the most comprehensive accounts of the C14th Islamic world.

It appears that after a lifetime spent on the road, the wanderer was content to work as a judge in Morocco and remain there until his death 1368. It was only then that Ibn Battuta all but vanished from the historical record.

In conclusion, Ibn Battuta was famous for the 30 years between 1325-54. His travels extended across the known Islamic world and beyond, from North and West Africa, Southern and Eastern Europe in the West, to the Middle East, India, Central and South-East Asia and China in the East. This was a much greater distance than Marco Polo covered!

Regardless of complete factual accuracy, he obviously undertook a fabulous journey which would be impressive even today with ease of transportation, and a prior knowledge of the destinations. We leave Canada to journey to Australia and we think that is an epic journey!

Hello Hels, As David above intimated, travel in those ages took a lot more fortitude, since the travelers were entering unknown territories and encountering unknown people. Today, we also know that they were exposing themselves to unsuspected diseases and health situations. Even before my first trip to Taiwan, I had friends from there in Cleveland, who also introduced me to the food and culture. Also, in Taiwan many signs are conveniently half in English (until you get used to Mandarin)--Ibn Battuta and Marco Polo did not have such a luxury.
--Jim

Good to see you Friday. When he stayed in Constantinople, Battuta found that living in a large non-Muslim city was strange. Primitive even. We Europeans normally expect the opposite..that the Muslims had to learn everything from us.

That is so true! There are many historical chronicles that omit or change facts, and historians are still very grateful for the evidence.... as it can be accumulated and assessed. Nor does it matter that Ibn Battuta may have included reports from places he did not personally visit himself. As long as the evidence is carefully assessed by later historians.

Ibn Battuta was totally aware of the risks he faced, especially disease, running into someone else's war, being isolated and lost etc. But he knew what he was doing and tried _never_ to travel through dangerous and isolated deserts by himself!

But there was something else that Ibn Battuta had that others did not have: a good education and employment history, plus good connections. Thus he was welcomed by many courts across Asia.

*blush* me too. In my early years at uni, I assumed that every valuable intellectual and cultural contribution to human life came from ancient Greece and Rome, or early modern Europe - foreign languages, maths, philosophy, the arts, religion etc. Ibn Battuta and other travellers had to go through the same learning process, in reverse.

Even today, travellers who don't broaden their minds are to some extent wasting their time.

I have heard of him, but not read his book. Goodness, what adventures!

I know more about Ahmad Ibn Fadlan, who had some interesting things to say about the Russian Vikings. I used snippets with my Year 8 history kids, in hopes of grossing them out with his descriptions of their morning routines, though I didn’t mention the funeral he witnessed.

As for thinking we knew more than the Muslim world, I’d much rather have the attentions of a Muslim doctor of that time than a western one!

Bless your heart! I have never read of Ahmad Ibn Fadlan before, but his travels must have been very important in the expanding of peoples' learning and the transporting of cultural elements from one part of the world to another.

By the way, I agree with Ahmad Ibn Fadlan who described the Rus as perfect physical specimens. We Rus are handsome hunks :)

History has not been kind to this intrepid traveller. I'm ashamed to say that I do not even recognise his name! However, his life does seem to have been a marvellous adventure.
CLICK HERE for Bazza’s instantly intransigent Blog ‘To Discover Ice’

I felt the same when, as a student, we were each asked to read the writings of one Islamic traveller. I chose Ibn Battuta, but knew nothing whatsoever about the others. For example:

Ibn Kallikan travelled from Arbil, to Aleppo, Damascus, Mosul and Cairo. He was a judge and published an encyclopaedia of famous Islamic cultural figures, writers, scientists, religious and legal minds.

Thank you Sue for Ahmad Ibn Fadlan who went from Baghdad, to the Volga River Russia, Bukhara and Iran. He was an expert on Islamic law and theology, and had extensive royal patronage.

I was reading this with bated breath just waiting fro you to say that he got to Northern Australia !!! What a man ! Yes it is interesting to consider the islamic world of that time and compare it to the attitudes now which seem to me to be more closed and conservative . Maybe that is in response to the perceived treatment of the middle east by the west ?? . Anyway a very interesting post . Thankyou. Where are you lecturing ??

yes our attitudes to people of different religions, languages and skin colours are very nasty now, but perhaps they always were. I am thinking of wars between Catholic and Protestant countries in the Thirty Years' War, or between the Republicans and Nationalists (with aid from Fascist Italy and Nazi Germany) in the Spain Civil War.

But the intellectual and cultural disdain with which European Christians treated Asian-and-African Muslims was counter productive. And vice versa. After all, astronomy, architecture or mathematics belong to all peoples. I was at CAE from 1991-2018.

Hi Hels - like the others ... I'd never heard of Ibn Battuta - an incredible man and with so many journeys ... however vague his recollections - it seems like a great social commentary on his era in life. Really informative ... even if a tale at times ... Fascinating. Thanks for writing this up - cheers Hilary

I did History every year during my 6 years of high school and during an undergraduate degree as well. And I too had never heard of Ibn Battuta. But I bet we all learned about Christopher Columbus, Vasco de Gama, Magellan, Marco Polo, and perhaps even Pêro da Covilha and Alfonso de Paiva! My feeling is that if the history didn't describe European events and European heroes, it wasn't worth hearing about :(