Rose Elizabeth Fitzgerald was born in Boston (1890-1995), oldest child of John "Honey Fitz" Fitzgerald, prominent figure in Boston politics. Rose was first introduced to politics by her congressman father. By the time she turned 15, Honey Fitz was one of the most popular mayors Boston ever had! He once took Rose and her sister to vis­it President William McKinley in the White House.

Rose had been accepted at prestigious Wellesley College during her junior year in high school, but her father insisted on the very Catholic Convent of the Sacred Heart in Boston instead. Rose reluctantly obeyed her father’s instructions but luckily she grew fond of the convent school, saying the relig­ious training she received there became her foundation for life.

In her teens Rose met Joseph P Kennedy (1888-1969) at Old Orchard Beach Maine where their families were holidaying. Despite her father not being happy with the Kennedys, the young couple were married in 1914 by Cardinal O'Connell. 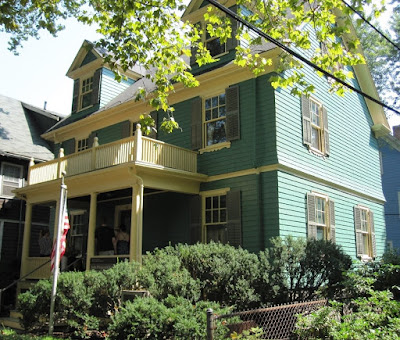 The couple's first home was a beautiful, 7 bedoom, three-storey grey building on Beals St in Brookline. Rose had learned fluent French and German when she went to a Dutch boarding school, and was an accomplished pianist. It doesn’t surprise me in the least that Rose was named the best-dressed public woman by a poll of fashion designers.

Joseph Kennedy was already making a small fortune each year as a businessman. When the family left Brookline and moved to New York 10 years later, he was already a multi-millionaire financier and in­vestor. His business dealings were often dodgy, especially his involvement with organised crime and bootlegging. And the long­­est of all his adulterous affairs was with Hollywood star Glor­ia Swan­son, an affair that took him away from home during Rose’s last preg­nancies. 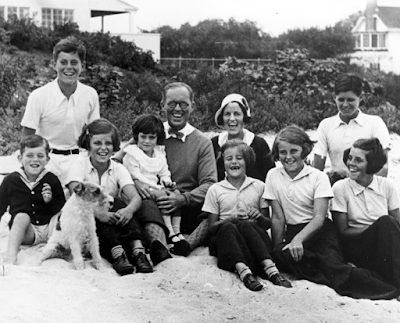 Joseph Snr and Rose in the centre back
and eight of their children, 1931

In the late 1930s, her husband was named US ambassador to Britain. During their time in Europe, the Kennedy family was invit­ed to attend Pope Pius XII’s coronation in March 1939 and enjoyed a priv­ate audience with him. Only as WW2 broke out did Rose and the children go back to the USA.

In 1938-9, while Fascist persecutions in Germany intensified, Joe Kennedy was strengthening his faith in Nazism. Joseph Kenn­edy had a solution to The Jewish Problem; he said he had worked out with Chamber­lain a plan to ship all German Jews to Africa. In Sept 1940, Kenn­edy again sought a personal meeting with Hitler because he believed he could bring about closeness between the USA and Ger­m­any. When the White House read Kennedy’s nasty pro-Nazi beliefs, I am not sure if a] Roosevelt insisted that Kennedy return home or b] the new British PM Church­ill dem­and­­ed that Kennedy leave the UK.

Despite his father nasty political views, Rose’s eldest son Joseph Jr still fought for the Allies in the Navy. Tragically Joseph Jr was killed in action in Aug 1944, when he was flying on a mission over the Eng­lish Channel. Rose's first daughter Rosemary was lobotomised at 22 (at Jos­eph’s in­sis­tence) and spent most of her adult life in a care home.

And Rose showed some religious nastiness of her own. Daughter Kath­leen was a Red Cross nurse in London and wanted to marry Protestant William Cavendish, Marquess of Hartington. Rose was very upset, and felt it was divine intervention when, just months after their marr­iage, Cavendish died fighting in WW2. And Rose was even madder when she heard that Kathleen later wanted to marry the still-married Prot­es­t­ant 8th Earl Fitzwilliam in 1948; again Rose said it was divine in­terv­ent­ion when her daughter Kathleen died in a plane crash in May 1948. Loss after loss :(

What an interesting post. The Kennedy's have always fascinated me. Rose seemed to come to terms with the many tragedies in her lifetime. But how much of that was putting on her public face? We will never know.

The Kennedys have certainly left their mark on the United States, and especially on the state of Massachusetts, where the mere mention of the name seems to be a bit of a polarizing event. It seems to be a love 'em or hate 'em relationship with little middle ground. Years ago we spent a few days with people we had met in Springfield, MA and there was a whole controversy swirling about a high school being renamed to honour JFK, with passionate rhetoric on both sides.

Even for families not using contraception, 9 live births in 18 years must have been exhausting for the mother. Burying her own children must have been even more devastating. But what a very long life she Rose led.

we will never know the agonies that Rose Kennedy suffered, but we DO know the intense political training that Rose went through from her father, school, university, church and husband. Her life was mapped out by the people she loved most.

YES...every major political figure generates passionate supporters and bitter opponents. But the Kennedys spread the love and the hatred across the _entire_ extended family. For example, I loved our late Prime Minister Bob Hawke, but I don't have any feelings about his brothers, sisters, wives, children and grandchildren. I don't even know their names. With the Kennedys, on the other hand, we know of every single relative they ever had... by name and face.

I know in the 19th century, so many babies died by their 5th birthday that parents understood they needed to have more babies than they perhaps wanted. But Rose Kennedy's babies all lived to adulthood, and those who died early... died instead from war, plane crash, murder.

Rosemary's lobotomy did not lead to an early death, but it led to a life of misery, loss of speech and total isolation from her beloved family. The nuns at Rosemary's school had feared that men would take advantage of the young woman, and her father enforced the lobotomy to prevent VD and pregnancy. Rose couldn't protect her daughter.

Hello Hels, I admit I'm creeped out a bit by the story of the older Kennedys. While rich and powerful (always a condition that attracts supporters and sycophants), they were masters of conditional love and support. I guess that Rose Kennedy was ok, and worked hard for you--as long as you didn't cross her.
--Jim

Ah, the American royal family! I think Rose and her husband deserved each other. By the way, the family appears in Michelle Cooper’s very good Montmaray trilogy, during their time in London.

Those in power always have an interesting history to tell.

I would think that Rose was schooled in putting up a good front to believing the importance of it herself . Maybe Joes philandering was a relief to her after 9 pregnancies !!

rich and powerful yes, but only for the men in their own right. For Rose, Jacqueline and the other Kennedy women, it was only reflected wealth and power. Of course Rose was a woman of her era, and didn't even have a vote at first.

many thanks... I see some reading coming up in my life.

I did not know about Michelle Cooper’s Montmaray trilogy, nor did I know about the Kennedy and Mitford families' appearances. Some of those two families thoroughly deserved each other :(

"schooled" was the appropriate word. When Rose was not allowed to take up the offer she received from Wellesley College, she was exclusively exposed to a narrow perspective of her role as a Catholic, dutiful wife and mother for all her early decades. Divorce wasn't an option, of course, and in any case Rose Kennedy adored her philandering husband.

They certainly do. When the events are actually happening, we read the protagonists' own versions, or their supporters in the newspapers and the Women's Weekly. Decades later, alternative and perhaps more truthful histories can be safely published.

Hi Hels - I hadn't realised Joseph Sr had Nazi sympathies ... They are an interesting family - though unfortunate in many ways - thanks for this ... it's given me some background - cheers Hilary

the reports on Joe Kennedy's relationships with Germany are damning, but not unanimous. For example, read:

On Kristallnacht, November 9-10 1938, 100 Jews were murdered in Germany, and 30,000 Jewish men were rounded up and sent to concentration camps. This was officially sanctioned by the Nazi government, and by now the writing was on the wall for German Jews. The governments of the United States and Great Britain were shocked but were unable to arrive at quick solution to getting Jews out of Germany. As FDR lobbied Congress to increase in the quota for refugees, amid a domestic political climate rife with anti-Semitism, the press reported that Kennedy seemed to have his own refugee plan. What was clear was that the Kennedy position was appeasement and the development of business ties with Germany.

Hjalmar Schacht, president of the German Reichsbank, proposed after Kristallnacht that Jews would be allowed to leave Germany with some amount of property in exchange for foreign economic concessions, and both Breitman and Lichtman argue that the proposal was in effect a ransoming of Jews. Schacht’s proposal was widely criticized -- except by Joseph Kennedy, who said in a conversation with the British Jewish activist Neville Laski that the appeasement of Hitler was positive, as it would intensify economic ties between the two sides, and act as a barrier to war. Kennedy further stated that it was a win-win situation for all. Kennedy blamed the Jews for the German problem, saying that the lives of Jews in Central Europe were not really worth all the agitation. The only reason why they needed to be allowed out of Germany was to avert war.

That "divine intervention" was really a nasty thought.

Fascinating, Hels. I have it in my head that Joe Snr was a thoroughly nasty piece of work as well as being an anti-British bigot. But I may have got that wrong and he was merely a Nazi sympathiser. Rose has been in the background in whatever I've read - I need to look again; enjoyed your account, thanks for opening my eyes. Divine intervention, indeed!

All adult children in the world disappoint their parents from time to time, when they start making their own independent decisions. That is the nature of one generation leaving the parental home, establishing careers, marrying and having babies.

But Rose was unforgivable regarding Kathleen's love for a Protestant man and re her daughter's fatal plane crash.

Joe Kennedy's years in London came at a particularly critical time in British-Germany history. And I understand that Kennedy wanted at all costs to prevent the USA going to war against Germany. But so many of his comments were blatantly pro-Nazi and/or blatantly anti-Jewish that I doubt his underlying motivation was pacifism. Nasty, nasty man:(

I remember as a child in the UK, how my parents pinned all their hopes on Robert Kennedy becoming President. He would end the Vietnam war, solve the middle east, end world hunger etc. I still remember my mum's cry of anguish when my dad told her that Bobby had been assassinated. I believe Joseph Kennedy suffered a stroke and died 6 months later. Ted was obviously not in the same league as Bobby or JFK but I am surprised that his only run for President was against his fellow Democrat President Carter. He was I think the best orator and speaker of the three. When I watch his "dream shall never die" speech, it still sends a shiver down my back.

My family as well. The mainstream political position in Australia was right wing of the labour party or left wing of the conservatives. So my parents totally believed in universal health care, separation of church and state, equality for women etc.

But they believed that the USA would never allow true democrats to be elected, and if they WERE miraculously elected, they would be assassinated :(